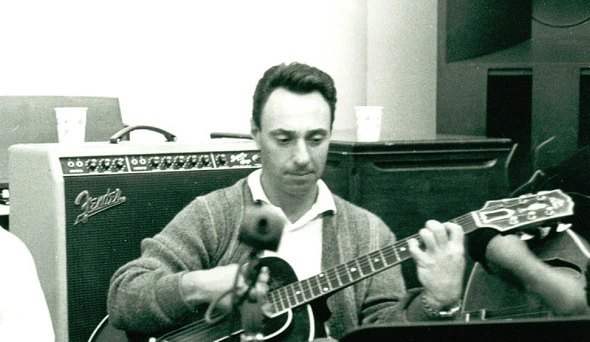 Bill Pitman, a guitarist associated with the collective of studio musicians known as the Wrecking Crew, has died at age 102. The New York Times reports that Pitman passed away on Thursday after an extended stay at a rehabilitation center due to a fall that resulted in a fractured spine.

Pitman was born in Belleville, New Jersey in 1920 and grew up in New York City. He started taking music lessons at a young age and after he returned to the United States post-World War II, he went to the Los Angeles Conservatory Of Music to study composition. He started playing with Peggy Lee’s band and performed on the radio program The Rusty Draper Show in the mid-1950s.

It was around this time started sitting in with a group of session musicians that would eventually come to be known as the Wrecking Crew. Pitman became an in-demand guitarist in the ’60s, and he played on some of the era’s most enduring songs: Frank Sinatra’s “Strangers In The Night,” Elvis Presley’s “Blue Hawaii,” Barbra Streisand’s “The Way We Were,” the Ronette’s “Be My Baby,” the Beach Boys’ “Good Vibrations.” He played the ukulele on “Raindrops Keep Fallin’ On My Head,” the Butch Cassidy And The Sundance Kid soundtrack song that won an Academy Award.

Pitman also performed on the soundtracks for countless films and television shows. Among them: M*A*S*H, Fast Times At Ridgemont High, Dirty Dancing, Goodfellas, I Love Lucy, Bonanza, The Sonny And Cher Comedy Hour, Star Trek. Pitman and the rest of the Wrecking Crew musicians were spotlighted in a 2008 documentary about their Los Angeles scene.

Pitman largely stopped being a session musician after 1973, opting to perform in then live bands of Burt Bacharach, Anthony Newley, Vikki Carr, and more; he also played with bands passing through the MGM Grand Hotel in Las Vegas. He also performed on movie soundtracks until his retirement in 1989. Pitman passed away at his home in La Quinta, California.