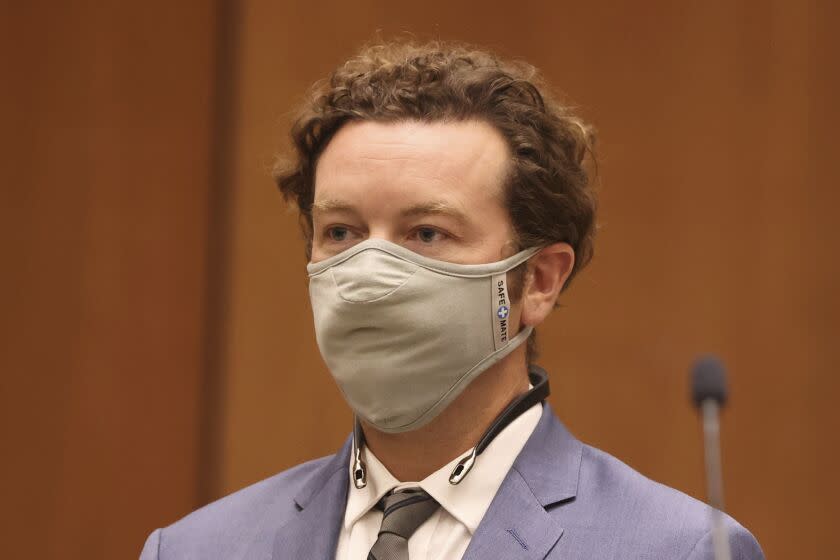 A woman who said actor Danny Masterson in 2003 raped her while threatening her with a gun spent four days telling her story last week in graphic and emotional testimony.

Known only as Jen B., she was the first to testify of three women who are accusing Masterson of rape. On the stand, she recounted, sometimes through tears, how a friendly, “brother-sister” relationship turned dark after the “That ’70s Show” actor assaulted her as she went in and out of consciousness.

She told jurors of how she feared the Church of Scientology and was pressured by its officials not to go to law enforcement with her allegations of rape against Masterson, a high-profile church member.

Jen B., a former Scientologist, met Masterson in the late 1990s when the two ran in similar circles in the church and socialized. Masterson’s personal assistant, Brie Shaffer, was Jen B.’s friend at the time.

One night in September 2002, Jen B. was supposed to meet Shaffer and Masterson, but Shaffer canceled at the last minute. Jen B. joined Masterson and others at Lucky Bar in Hollywood, where the actor gave her a vodka-and-grapefruit drink, according to her testimony.

Jen B. planned to sleep at Masterson’s house, and the two left the bar around 2 a.m., she testified. She said she had only a few drinks but was drunk and dizzy when they arrived at Masterson’s Hollywood Hills home.

Despite her confused protestations, she testified, Masterson began kissing her, then had sex with her. She said she stopped the encounter when Masterson attempted to penetrate her anally.

Despite her negative view of the night, she did not consider it rape at the time, she said. Masterson is not charged for the 2002 encounter.

Jen B. told friends about what happened and was called in by Scientology officials to discuss the incident, she testified.

Numerous friends had written complaints to the church, known as “knowledge reports,” against Jen B. The church, through her “ethics officer,” had her go through weeks of training, known as “handling,” in response to the incident.

“You can never be a victim [in Scientology],” she said. “Nothing ever happens to you that you didn’t cause…. No matter what condition you find yourself in, no matter how horrible, you are responsible.”

Jen B.’s testimony regarding Scientology reignited debate between the prosecution and defense over the degree to which the controversial religion would be brought up in the trial.

For months after the 2002 incident, Jen B. did not speak with Masterson, and her relationship with Shaffer was on the rocks.

In April 2003, however, she returned to Masterson’s home, where he was having a party. He offered her a red drink, she testified.

Less than an hour later, Masterson approached and told her she was going in the Jacuzzi, Jen B. told the court. Though she said she did not want to go in, Masterson would not take no for an answer and threw her in, she said. Once in the water, she began to feel sick.

“I’d never been so nauseous in my life,” she said. “I heard [Masterson’s] voice saying, ‘I’m going to take her to throw up, stick my fingers down her throat. She needs to throw up.’ “

He took her to his bathroom and made her vomit and take a shower, Jen B. testified. After the shower, Masterson moved Jen B. to the bed, where she passed out, she said.

“When I first woke up on that bed, he was on top of me, and his penis was inside me,” she testified.

She tried to grab Masterson’s face or hair to stop him, but he removed her hand and continued, she testified.

“I grabbed the pillow behind my neck … pushed it into his face right here. It was so close…. He shoved it back in my face harder, completely, with all his body weight on me,” she said. “Smothering, smothered. I could not breathe…. I don’t recall him saying anything…. I went unconscious.”

When she came to, he was still penetrating her, Jen B. testified.

“I grabbed his throat…. Oh, God. So scary,” she said, crying. “[He] pulled my hand off and pulled it out, held it, grabbed the other hand, held it together. And just his face — I’ve never seen it look like that.”

When Jen B. regained consciousness that night, she heard banging at Masterson’s door, she testified. The actor pulled a firearm from a drawer, she said.

“He pulled [the gun] from the nightstand area. Pulled it up and held it in his hand,” she said. “He told me to shut the f— up.”

Then Jen B. passed out again.

Jen B. reported the rape to the Los Angeles Police Department in 2004, despite her fears about the reaction of officials in the Church of Scientology. She had asked for permission from officials to report the rape to police but was denied by the church’s “international justice chief.”

Olmedo allowed Jen B. to explain how her adherence to Scientology doctrines caused her to delay reporting the rape.

She said she feared she would be excommunicated if she reported Masterson to police.

“My life would be over. My parents would have to disconnect from me…. They’d have to choose [Scientology] or me…. I didn’t know that they would choose me over that,” she said.

No charges were filed against Masterson at the time. Jen B. eventually settled with him for $400,000 and signed a nondisclosure agreement about the incident.

She admitted forgetting certain details about the night after nearly two decades. Under cross-examination, she conceded that she had forgotten Masterson woke her the morning after the alleged rape; she had previously thought he was gone. But she insisted that she recalled the most important facts.