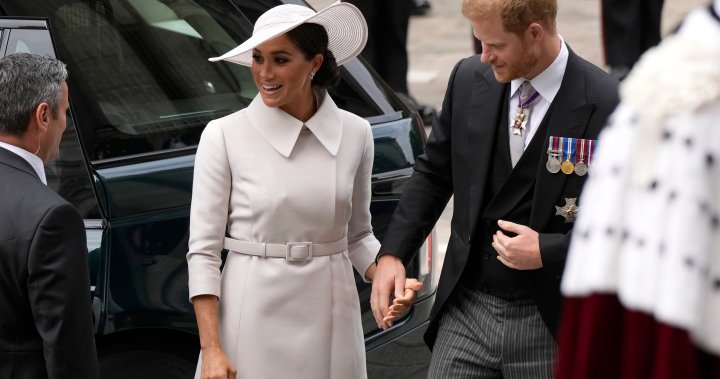 The presence of Prince Harry and Meghan Markle at the Queen’s Platinum Jubilee celebrations suggests as she enters the twilight of her reign, she wants to put affairs in order, says one royal expert.

Katie Nicholl, author of the upcoming book The New Royals, told Global National‘s Dawna Friesen in an interview from London, U.K., that the momentous milestone marking 70 years on the throne is also taking place amid a “wake-up call” caused by the Queen’s recent health issues.

“She’s been incredibly robust. She’s had a huge amount of energy. She has always been devoted to duty. But there are, frankly, some days when she cannot move. And we have to understand that we have to accommodate that,” said Nicholl, citing a conversation with a Buckingham Palace aide.

While the Queen made a much-anticipated appearance on the Buckingham Palace balcony Thursday to greet onlookers packed into The Mall for Trooping the Colour, her office later released a statement saying she felt “discomfort” and as a result, would not attend the service of thanksgiving planned for Friday.

Harry and Meghan, formally known as the Duke and Duchess of Sussex, were part of the gathering of Royal Family members inside the palace but did not appear on the balcony.

Those spots on the balcony were reserved for senior working members of the Royal Family, and Harry and Meghan have not been so since their highly public decision to step back from working roles in early 2020. The pair have been living in California since, along with their two children, Archie and Lilibet.

But the service of thanksgiving at the historic St. Paul’s Cathedral on Friday saw the couple in the public eye alongside other royals as part of what Nicholl described as a desire by the Queen to see her family mend bridges following the rifts created when Harry and Meghan stepped back.

“I think for the Queen, the whole idea of the Royal Family is that sense of union. It is a family. She wants to see her family together. We know that we are now entering the Queen’s twilight years. We’re on the eve of her reign and the dawn of Charles’s,” she said.

“I think everything we’re seeing is that the Queen wants all those loose ends tied up. She wants to go knowing that everything is in check, knowing that her grandchildren are at least on talking terms.”

Two polls released on June 1 by YouGov suggested Harry and Meghan’s popularity among Brits has dropped to an all-time low. Just 32 per cent of people view the prince positively and 58 per cent view him negatively, that polling suggested.

When it comes to the Duchess of Sussex, her numbers are even lower: only 23 per cent view her positively while almost two in three view her negatively.

Their appearance at the Queen’s jubilee celebrations marks the first time the Duchess of Sussex will see the other members of the Royal Family since her 2020 tell-all interview with Oprah Winfrey.

In that interview, she described facing racism from unnamed members of the Royal Family — accusations Prince William denied, saying: “We are very much not a racist family.”

“It’s been difficult for the Queen. The Queen is very much a family person,” said Dickie Arbiter, former press secretary to the Queen, in an interview with Global News.

“There is a rift between William and Harry — that, there is no question. William, quite rightly, as the older brother … would say, ‘Hang on, hang on, take your time. There’s no rush,’” Arbiter said, describing the rift as stemming from concerns from Prince William that Harry and Meghan were rushing into marriage.

“Harry took umbrage of that. That really was the essence of the rift.”

He added: “I’ve got to put a question. Did Meghan really want to be here? Was this the the ultimate part she was looking for once Suits was coming off air? Was this her next role? Because it wasn’t anything else.”

Nicholl pointed to the Oprah interview as a source of many questions among the British public about the presence of the Sussexes at the Platinum Jubilee celebrations.

“There are many people in Britain who don’t feel that the Sussexes deserve a place at these jubilee celebrations in light of that Oprah interview,” said Nicholls.

“And in terms of how they left the Royal Family, which was seen as very discourteous and disrespectful to the Queen, I was told by a source close to the Queen that she has an incredible capacity for forgiveness,” she added.

“I think we’ve seen that capacity for forgiveness through the years. But this is about celebrating her life, her reign and her family is a part of that. She wants them by her side.”