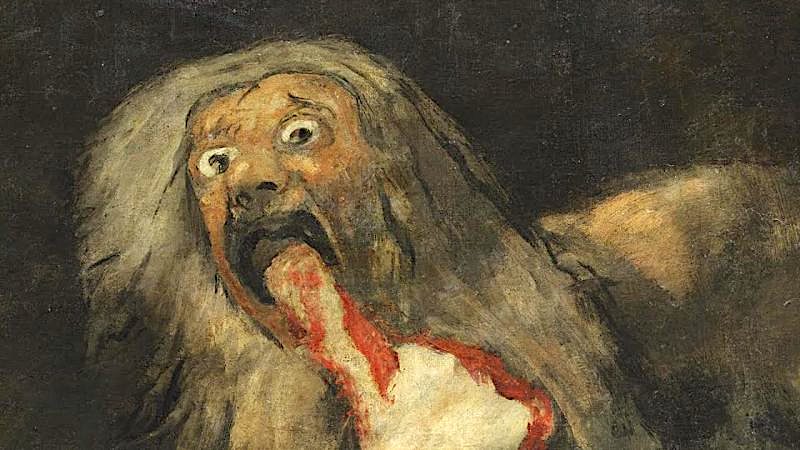 Though most of us see Francisco Goya’s Saturno devorando a su hijo, or Saturn Devouring His Son, at least every few months, we were never meant to see it all. The same is true of all fourteen of the so-called “Black Paintings,” which Goya executed late in his life on the walls of his villa outside Madrid. They now hang at the Prado where, as one tour guide put it to the Guardian‘s Stephen Phelan, “some people can hardly even look at them.” When visitors enter the room that contains these often grim and bizarre visions, “they are always surprised. I don’t think I’ve ever seen a visitor whose expression hasn’t changed.”

What could have moved Goya to create such paintings? In the new Great Art Explained video essay above, gallerist and Youtuber James Payne lays out the relevant factors in Goya’s life and the turbulent society in which he lived. His Enlightenment views and penchant for brazen satire drew suspicion, as did his willingness to paint for French and pro-French clients during that country’s occupation of Spain.

At the age of 72 he ended up putting himself into a kind of countryside exile, taking up residence in an estate called the Quinta del Sordo (the “Villa of the Deaf,” and suitably enough, since Goya himself happened to have lost his hearing by that point).

It was in the Quinta del Sordo, and indeed on it, that Goya (or, according to certain theories, Goya’s son) set his artistic worldview free to realize its most grotesque and jaundiced forms. Even apart from Saturn’s act of cannibalistic filicide, Phelan writes, “a humanoid billy goat in a monkish cassock bleats a satanic sermon to a gasping congregation of witches. A desperately expressive little dog appears to plead for rescue, submerged up to its neck in a mud-colored mire beneath a gloomy, void-like firmament of negative space.” Known as El Perro, or The Dog, that last artwork is one of the most beloved in Spain — and, in its ascetic way, the most haunting Black Painting of all.

The Most Disturbing Painting: A Close Look at Francisco Goya’s Saturn Devouring His Son

European Paintings: From Leonardo to Rembrandt to Goya — A Free Online Course from the Universidad Carlos III de Madrid (UC3M)