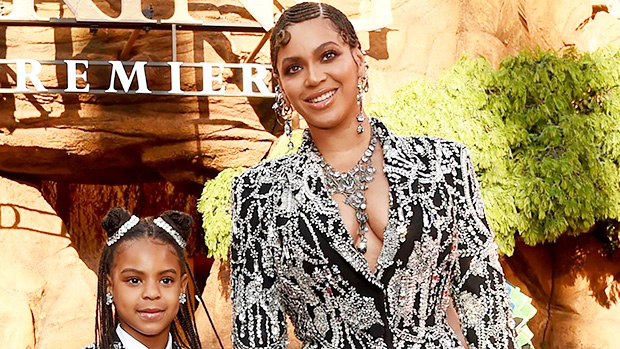 Blue Ivy Carter may be only 10 years old, but she can bid with the best of them! Blue Ivy joined her parents, Beyonce and JAY-Z at the Wearable Art Gala auction on October 22 and got in on the fun. Blue Ivy bid over $80,000 on a pair of Lorraine Schwartz diamond earrings that her grandmother, Tina Knowles-Lawson, was wearing that night.

Blue Ivy placed a bid at the auction for $80k like it was nothing lol via @quintabrunson on IG #wearableartgala #beyonce pic.twitter.com/1oNduUpjax

In a video taken by Abbott Elementary creator and star Quinta Brunson, host Keke Palmer throws out the number $80,000, and Blue Ivy excitedly stands up to wave her auction paddle. Tina’s initially stunned in her reaction, but her shock quickly turns to pride. Quinta can be heard cheering for Blue Livy.

Tina was wearing the gorgeous earrings that Blue Ivy bid on. The earrings once belong to Beyonce. Blue Ivy’s parents were sitting next to her at the gala and seemed to be very encouraging of her bidding at the auction.

Blue Ivy looked fierce and adorable in a royal blue flapper-inspired ensemble. She also wore pearls and a feathered headband to the event, which had a “Harlem Nights” theme that celebrated fashion from the 1920s to the 1950s. Beyonce stunned in a strapless Gucci mermaid gown that had two stars embellished on the sequined bust. She also rocked pink silk gloves. JAY-Z looked handsome in a suit.

The 10-year-old didn’t go home with the earrings, unfortunately. She lost out to Mielle Organics founder Monique Rodriguez and her husband Melvin, who bid $105,000 for her jewelry, according to E! News.

Blue Ivy is no stranger to this event or bidding in an auction. At the 2018 Wearable Art Gala, Blue Ivy bid $17,000 for a painting of a young Sidney Poitier, Vanity Fair reported. She increased her bid to $19,000 but lost out to Tyler Perry. The then 6-year-old Blue later bid on a 36″ x 36″ art piece made of deconstructed law and medical books and won with a final price of $10,000. Just another day in the life of Blue Ivy!

Beyonce’s Kids: Everything To Know About Her 3 Adorable Little Ones & Photos Of Them