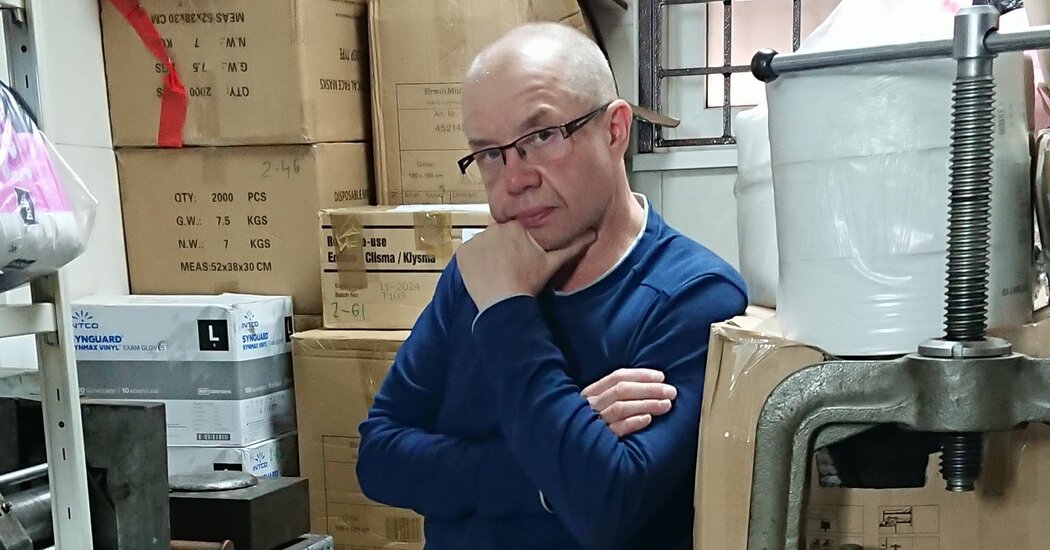 In May, during a brief respite from the Russian rockets that had been hitting Kharkiv, Ukraine, Stanislav Drokin walked out of his jewelry atelier in his hometown’s city center to collect bomb fragments.

Mr. Drokin has lived in the atelier since Feb. 24, the day Russia invaded Ukraine. He moved there with his wife, Ludmila, along with two families of friends because it was too dangerous to remain at their home in Saltivka, a neighborhood in Kharkiv, Ukraine’s second-largest city.

Within a few weeks, however, everyone fled except for Mr. Drokin, 53 and, like all Ukrainian men from ages 18 to 60, is prohibited from leaving the country. (Ludmila joined the couple’s daughter, Alina, in Berlin, while the other families dispersed across Ukraine.)

For the first two months Mr. Drokin dedicated all his time to volunteering in the war effort. He allowed the atelier, which serves as both a production facility and showroom, to take on a third, de facto role: storage space for medicine and food.

Sorting and taking inventory of the supplies occupied most of his time. By mid-May, however, when the volunteer movement became more organized, Mr. Drokin was able to resume his jewelry practice.

Many members of the Ukrainian jewelry community — those who remain in the country and those in refuge abroad — said the war had motivated them to support Ukraine’s jewelry industry like never before.

In Mr. Drokin’s case, he created an art object made from a long, branchlike bomb shard, which he set with seven flowers crafted from bright blue titanium. Called Nezabudka, or Forget Me Not, the piece belongs to a collection of one-of-a-kind jewels Mr. Drokin is making to preserve “the memory of the people that have died or have become victims of this war,” he said in early June on a three-way phone call with Alina, who acted as an interpreter. “So they are not forgotten and their suffering is not forgotten.”

The Forget Me Not collection is Mr. Drokin’s way of showing his fellow Ukrainians — and the world — that their country’s centuries-old jewelry tradition, much of it centered on Kharkiv, will survive the conflict and may well emerge stronger.

Many Ukrainian jewelers echoed that message. “I used to work for Van Cleef & Arpels, a very well-known international brand with French roots,” Olga Oleksenko, the former manager of the Van Cleef & Arpels boutique in Kyiv, said by phone in early June from her temporary home in Vienna. “I didn’t pay attention to Ukrainian jewelry. It wasn’t my focus. But now I am so impressed at how talented our artists are, and the war helped me to realize that.”

In early April, Ms. Oleksenko and her friend Natalia Kietiene, a Russian Lithuanian public relations and marketing consultant based in London, pooled their resources to create a platform to support Ukrainian jewelers. Known as Strong & Precious, the project scored its first big win when Thomas Faerber, a co-founder of GemGenève, an international gem and jewelry trade fair in Geneva, invited Ms. Oleksenko and Ms. Kietiene to take a booth at the fourth edition of the fair at the Palexpo convention center in early May.

One of Mr. Faerber’s first questions, said Ms. Kietiene, was how many pieces of jewelry they planned to exhibit.

“We couldn’t answer him that we have nothing,” she said by phone in early June after the fair. “I started to call and write jewelers from Ukraine to see if it was possible to bring something to Geneva. Some Ukrainian jewelers were refugees and in very fragile situations and some were still in Ukraine. And collecting pieces from Ukraine — it was like a spy movie.”

Ms. Kietiene described the elaborate planning that was required to ferry jewelry out of the country from Kyiv, Odesa and Kharkiv. “We have this brave person — it was a girl, of course, because it’s impossible for men to cross borders with Ukraine because of the military situation — who brought pieces from Chernivtsi, a city in western Ukraine, to a small Romanian city on the border. And after that we have a person with a car, who brought the jewelry from the border to Paris, and one more person who brought it from Paris to Geneva.

“Some refugees were in Berlin, Pforzheim [Germany], Portugal, a small town in France,” Ms. Kietiene added. “One girl who was in Berlin sent pieces to Geneva, but I didn’t receive the parcel. I asked her to send me the tracking number. And she said, ‘Sorry, I don’t have a tracking number. I used the cheapest post because it was my last 17 euros.’ We received her jewelry two days before the fair closed.”

In the end, the booth showcased jewelry by a dozen Ukrainian designers, including established brands such as Oberig, which was founded in 2009 as a fine-jewelry label based on Ukrainian talismanic symbols, as well as up-and-coming makers like Inesa Kovalova, a Central Saint Martins graduate whose nylon and titanium designs, made from 3-D printing, recall the metalwork plants in Kramatorsk, the industrial city in eastern Ukraine where she was born.

News of the Ukrainian presence at GemGenève drew a number of Ukrainian visitors to Palexpo, said Ms. Kietiene. “They weren’t interested in jewelry, actually, but they were interested to have a look,” she said. “They said it signaled for them that the future might happen. And for me it was the most important fact of this project. That people who had to run from their homes, who had to leave their families — we bring them hope in some way.”

The same could be said of the designers involved with Strong & Precious, many of whom have restarted production in Ukraine — including in Kyiv, Lviv, Kharkiv and Odesa — despite the unpredictable nature of manufacturing during wartime.

“There are a lot of small workshops that are still working, but at the same time a lot of them are bombed and destroyed,” Ms. Oleksenko wrote in a follow-up email. “I know some jewelers who are making only wedding rings now and give them for free to the people who want to be married.”

Oberig, in Kyiv, is one of them. The brand, known for making 18-karat gold jewels that feature patterns based on vyshyvankas, the traditional Ukrainian embroidered shirts, was forced to halt production in late February because of disrupted supply chains, labor shortages and constant shelling in Kharkiv, home to its manufacturing facility.

“We immediately began to look for ways to return to work,” Tatiana Kondratyuk, Oberig’s founder, wrote in an email.

“In May, we relaunched our production facility to run a very important charity project for the defenders of Ukraine,” she added. “Now we don’t produce pieces for sale, we make only one type of jewelry — silver wedding rings — and provide these rings to soldiers who marry during the war absolutely for free. Our team delivers them to all regions of Ukraine, even to the hot spots in the east and south.”

For Roxana Romanenko, founder of Rockah, a three-year-old Ukrainian jewelry brand inspired by ancient cultures and mythologies, the war with Russia has served as a reminder of Ukraine’s long history as a battleground. In the 15th century, Cossack warriors were the first to defend the same land that is now, once again, under siege.

“From the beginning, they were fighting the Polish-Lithuanian commonwealth, then the Ottoman Empire and then the Muscovy — the Russians,” Ms. Romanenko, who is based in Geneva, said by phone in late June. “Cossack culture is a very rich archetype for us,” she added. “When the war started, a lot of people started to talk about them, about how we are a nation fighting for freedom for many centuries.”

Ms. Romanenko is designing a collection of jewelry dedicated to Cossack culture that she hopes to introduce by mid-November.

It will incorporate materials including Ukrainian hemp fabric, patinated bronze and “a lot of pieces not usually seen in jewelry, like a little box to put earth in because the Cossacks believed if you die outside of your motherland, you’ll go to heaven because you have the earth with you,” she said.

“Of course, we all feel so patriotic now,” Ms. Romanenko added. “And on top of that, nobody knows about Ukrainian culture. Jewelry is a very good way to tell people.”

For all their pride in being Ukrainian, many of the country’s jewelers also recognize that their work must stand on its own merits.

Alyona Kiperman, founder of the fine-jewelry brand Nomis, which began in Kyiv two years ago, put it bluntly: “We’re not selling emotions about the war,” she said during a preview event in early June at the Couture jewelry show in Las Vegas, where she showed her convertible 18-karat gold jewels.

“We’re selling really good product, and also, we’re from Ukraine,” added Ms. Kiperman, who relocated to Geneva after the start of the war. “We are proud we are from Ukraine, that our product is made in Ukraine, but we are not selling souvenirs.”

In the most extreme circumstances, such as those facing Mr. Drokin, sales are beside the point. “Even being in the epicenter of the war, one could say it has a positive impact on my art,” he said. “All the emotions I experience are going into my work.”