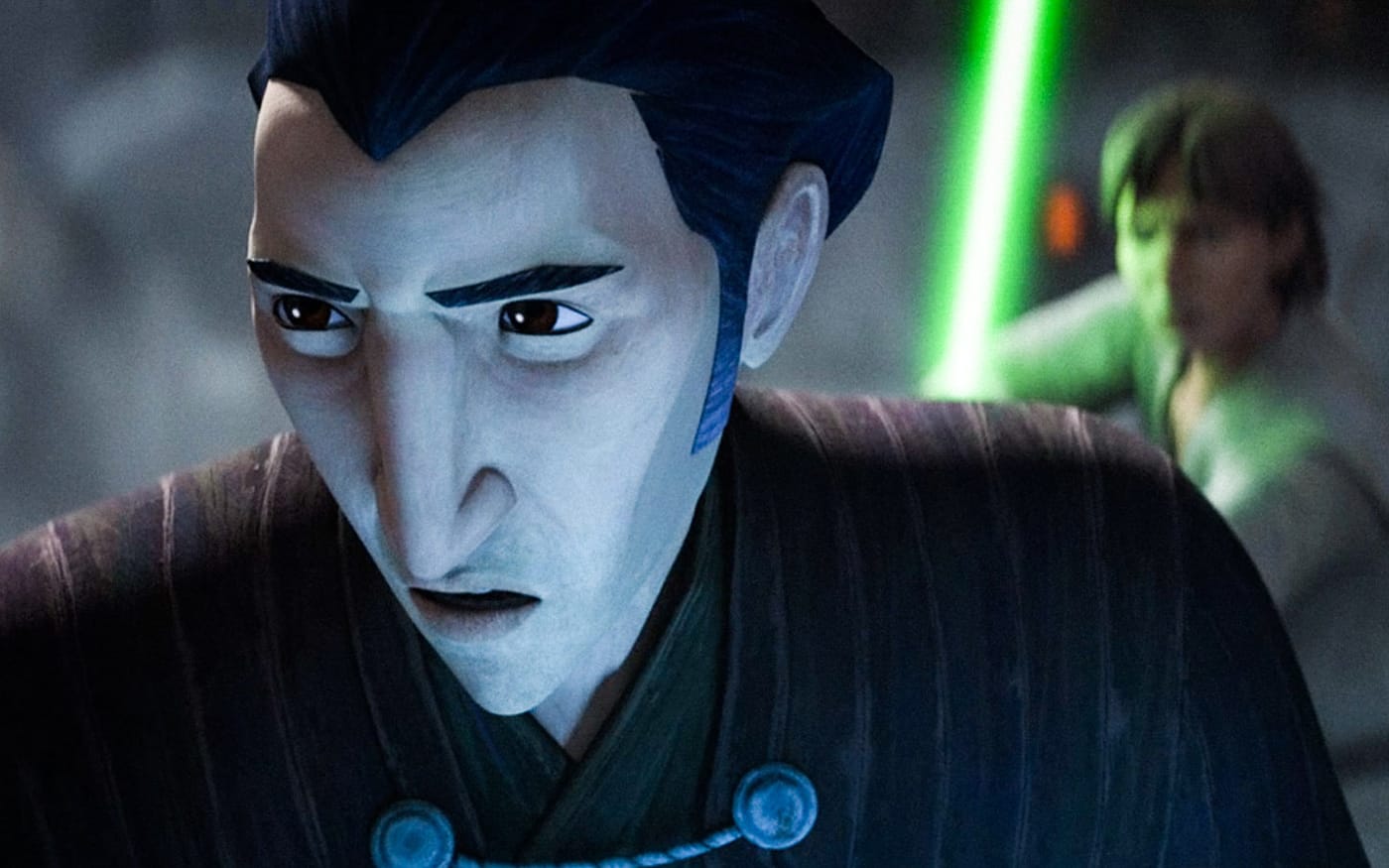 Star Wars is no stranger to tragedy. George Lucas’s original six films chart a course for the rise, fall, and redemption of Darth Vader, arguably cinema’s most iconic villain. Kathleen Kennedy’s sequel trilogy plots a similar trajectory for Luke Skywalker, arguably cinema’s most iconic hero. Both characters make grievous errors in judgment. Where Vader plunges further into darkness, Luke isolates himself from anyone and anything. Yet both are ultimately saved from their jaded cynicism by youthful idealism and ultimately sacrifice themselves in the name of goodness. As Lucas himself once said, their stories are meant to “rhyme.”

This kind of recurrent imagery permeates Star Wars in particular, and mythopoetic storytelling in general. It is a way of grounding stories in specific themes and elevating certain ideas to the foreground in sprawling narratives. It provides different storytellers a context in which to write, and fodder for playing with familiar tropes in unexpected ways. A new voice or perspective can take one of those ideas, flip it upside down, examine it, interrogate it, and then comfortably put it back on the shelf—this, by the way, is exactly what Rian Johnson did in 2017’s Star Wars: The Last Jedi, a film that both critics and audiences seemed to profoundly misread, and what Tony Gilroy is currently doing with the showstopping Andor series.

Now, with the new six-episode animated Disney Plus series Star Wars: Tales of the Jedi, Lucasfilm veteran Dave Filoni has contributed yet another show to the property’s ever-expanding library. One would be forgiven for expecting a series with such a title to feature inspiring stories of heroism and derring-do from swashbuckling Jedi at the height of their power; however, one would be mistaken. Instead, Filoni has crafted a moody miniseries that charts the parallel (might we say “rhyming?”) journeys of two very different and tragic characters: Dooku (Corey Burton) and Ahsoka Tano (Ashley Eckstein).

The second, third, and fourth episodes play as a series of vignettes in the early life of Count Dooku, a character originally played by the great Christopher Lee in Lucas’s prequels. Though somewhat underrated among the pantheon of Star Wars baddies, Lee’s Dooku is perhaps the most nuanced of Palpatine’s three apprentices. Though lacking the depth of character given to Anakin Skywalker, whose fall is predicated upon hubris and naiveté, Dooku’s journey to the dark side is one born partly of rationalism. He does not conduct himself like the other Sith in his interactions with the Jedi. His conversation with a captive Obi-Wan Kenobi (Ewan McGregor) in Attack of the Clones is less seductive and more matter of fact, less about power and more about disillusionment with the hubris of the Jedi Order.

Filoni’s series doubles down on these interesting wrinkles of character, showing viewers a Dooku decades before his encounter with Obi-Wan. Though short, the episodes get a lot of mileage out of demonstrating the small and unsexy defects in the Jedi Order’s rationale, such as their passivity and growing indifference to the political situation in the galaxy, which prompts them to become unreflective puppets of the Republic Senate. For a true believer like Dooku, these compromises are unacceptable, and put him on the path to becoming that same jaded, cynical individual as Vader and Luke.

Personally, I find it fascinating that every “major” Jedi character in Star Wars must come around to accepting this philosophy. All of them must grow up, shed their naiveté, and realize that the Jedi are flawed, but that those flaws do not negate the principles upon which their Order was founded. The same internal conflict that drives Dooku into the spider’s web of Palpatine’s machinations is the same conflict that causes Qui-Gon Jinn (Liam Neeson) to butt heads with the Jedi High Council in The Phantom Menace, that causes Obi-Wan to grow wary of the Jedi’s status as military combatants in The Clone Wars, that provokes Anakin to abandon the Order’s teachings in Revenge of the Sith, and that Luke himself espouses in The Last Jedi.

Dooku’s path mirrors that of Vader’s, in that his fear at the unmooring of his accepted philosophy carries him to the dark side. Ahsoka’s storyline, however, mirrors Obi-Wan’s and Luke’s. After she is ousted by the Jedi Order on false charges in Filoni’s Clone Wars series, she isolates herself, as we begin to see in Tales of the Jedi. But, true to form, her isolation is short-lived before trouble finds her again, and she dedicates herself to aiding a fledgling rebellion.

In Lucas’s galaxy, “Fear is the path to the dark side.” As Luke tells Rey in The Rise of Skywalker, “Confronting fear is the destiny of a Jedi.” How each of these characters respond to that fear is what makes the difference, and what turns tragedy into triumph. Obi-Wan is never more triumphant than when he flashes Vader that sly, wizened smile just before vanishing into the ether in A New Hope, accepting his fate and becoming “one with the Force.” Vader’s defining moment is choosing to sacrifice himself to save his son by hurling Palpatine into the pits of the second Death Star in Return of the Jedi. Luke was never so powerful in life than the moment that took him to his death, when he appeared before the entire First Order in The Last Jedi and outmaneuvered Kylo Ren, sparking legendary tales that relit the fires of hope across the galaxy. All these characters are carried into the Force—all of them, except for Dooku.

No, Dooku’s story ends unceremoniously in the opening act of Revenge of the Sith, in a single, stunning act of betrayal. After finally being bested in single combat by an Anakin Skywalker already dangerously close to the dark side, Dooku’s execution is prompted by Palpatine himself, the Sith Lord with whom Dooku had aligned himself. It is a moment played to perfection by Lee, who gawks in bewilderment, literally rendered speechless by the proclamation that seals his fate. It is one of the darkest character beats in Star Wars, one made even more tragic by the arc Filoni gives him in Tales of the Jedi. Dooku’s story serves as a searing reminder that not all stories end in a happily-ever-after, and that some come up a day late and a dollar short, brought to their unfortunate ends through myriad small and seemingly innocuous compromises of morals and of character.

Many Christians today struggle with the idea that such a tragedy might befall them. And I do not mean tragedy in the sense of some freak accident entirely outside of one’s power to control—I mean that they, too, can compromise themselves through neglecting small deficiencies of character. A tragedy of Dookuian proportions, if you will. If this were not the case, the apostle Paul would never have encouraged the believers in the church at Ephesus (most of them former Gentiles) to “be careful how you walk, not as unwise people but as wise, making the most of your time, because the days are evil” (Eph. 5:15-16, NASB).

Without turning this article into a conversation about the teachings of “lordship salvation,” suffice to say that if Paul did not believe it was very possible for a professing Christian to turn around and royally screw up, then it seems pretty unlikely that he would ever have put ink to scroll. Practically every epistle he wrote contains some kind of admonishment that believers should avoid one set of behaviors while practicing another. To err does not jeopardize one’s sealing by the Holy Spirit, otherwise Paul might have argued quite differently in his letter to the Ephesians, where divisions and false teachings were threatening to split the church (Eph. 4:14-15; 1 Tim. 1:3-4). But to err could lead to devastating temporal consequences—as the Corinthians learned firsthand (see 1 Cor. 11).

To turn a blind eye to the very real dimensions of tragedy that permeate the gospel account and continue to haunt the world is to shallow out and ignore the reasons for Paul’s instructions in the first place. As W. Stanford Reid wrote in 1957:

The Christian cannot and does not seek to escape from the sense of tragedy in the world. But his view of tragedy is the result of a sense of insecurity forced upon a world of chance. He sees tragedy in man’s continual rejection of the sovereign God of grace; but at the same time he also sees tragedy swallowed up in hope. Christ had died; yea, he has risen again and he offers salvation freely to all. Tragedy is not ultimate, for Christ lives and reigns as the Redeemer and Intercessor for all who come unto him by faith.

As any believer can attest, the Christian life is one that must be walked “circumspectly,” with carefulness and clarity of thinking, and reliance on Scripture’s revelation of the will and character of God for understanding what is right and wrong in a world of darkness.

Perhaps this truth is what makes the characters of Star Wars so mythic—they are “relatable” not because they work a nine-to-five job or worry about bills, but because their dimensions reflect something deeper than “relatability” to any one culture. Rather, these mythic archetypes speak to something deeper and more primal, to the commonalities found in the human condition the world over. In this, Christians can reflect as much on the tragedy of Dooku as they can on the triumphs of characters like Ahsoka or Luke, especially when it comes to ascertaining the current state of the modern American church.

Dooku is not wrong in his assessment of the Jedi Order’s shortcomings; in fact, at least one Council member flat-out tells him that he is right. It might even be that he needs to distance himself from the established Order to right his thinking in the first place; however, fear steps in, and, isolated from the other Jedi and too embittered to receive the outreached hand of his concerned friend, Yaddle (Bryce Dallas Howard), he falls further into the clutches of the dark side.

If the current trend toward an undefined secularization (that is projected to continue) is to be believed, then many Christians—especially public figures—are leaving the church (and the faith). Too many are quick to dismiss them, and too few have seemed concerned enough to warrant any serious reflection on the issues that prompted their exodus in the first place—and I do not mean the “major” issues, like those of abortion or gay rights, which have received plenty of attention, and rightly so. I am talking about the “minor” issues that have caused disillusionment among many within the church: cold-heartedness, hypocrisy, and a lack of common decency, all things the apostle Paul warned against time and again (Rom. 2; Eph. 4).

The little things add up over time; Dooku did not abandon the Order overnight, and when he did, the Jedi had given him plenty of reasons to do so, most of them small and unnecessary, the results of pretense, insincerity, and artificiality. People will leave the church over certain issues, to be sure—a church that is unwilling to compromise the fundamental doctrine of the Christian faith is absolutely going to invoke the ire of the world, just as Jesus’s original disciples did (Matt. 10:22; Luke 21:17; John 15:18-25). This is nothing new. But there are also some leaving who shouldn’t, who are not leaving because their church cares deeply (and rightly) about the sanctity of human life or the biblical institution of marriage between man and wife. They are leaving because they are fed up with hypocrisy and the lack of accountability—and that is something we can all agree is unacceptable.

It is not that Dooku was right to leave the Order; rather, it was wrong that the Order gave him so many reasons to do so in the first place.