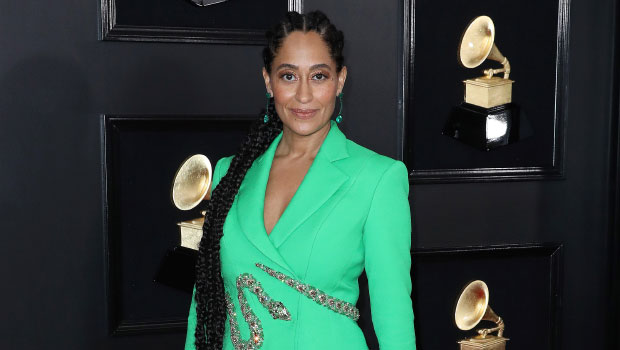 Tracee Ellis Ross is turning up the heat this 4th of July! The Black-ish star, 49, sizzled in a set of bikini snaps shared to her Instagram on Sunday, July 3 ahead of the holiday celebrations. Kicking back during a pool day with friends, Tracee looked incredible in her strapless green two-piece which she rocked with a matching trucker hat and some serious bling in the form of two gold necklaces.

The stunning daughter of Diana Ross has been happily sharing amazing selfies ahead of her 50th birthday in October. In a recent interview with The Guardian, Tracee opened up about growing older in the entertainment industry and how Hollywood often wades in ageism. “It is especially aimed at women,” she said. “But you know, I’ve always been excited about getting older. I love getting wiser and having more experience.” However, she went on to say she still deals with “vulnerabilities and discomforts” about her age. “But trying to pretend or hide the things that I feel insecure or uncomfortable about doesn’t make them any less comfortable, you know?”

Tracee then explained what an honor it is to grow older, in light of the recent mass shooting at Uvalde, which left 19 children dead. “Not everybody has that honor, with everything going on in this country, with all of the violence and the children that don’t get to live that long.”

She also touched up on the idea of looking perfect for social media, which she found difficult to deal with in the past. “I have struggled with perfectionism, and now I shun it. I want to be in a relationship with myself as I am. I don’t want to be fighting with an image that I put out that I can’t keep up with,” Tracee admitted.

Echoing the sentiment when she recently graced the cover of Harper’s Bazaar‘s November issue, Tracee got candid about accepting herself as she gets older. “Learning to be me has been a really long journey,” she said. “It took me a long time to get to know myself, to accept myself, and even on some days to really like and love myself. And then it took me a whole other load of years to have the courage to actually live in the world as that person.”