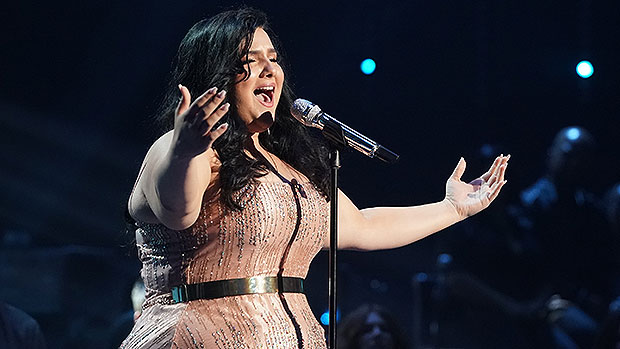 The top 14 returned to the stage during the April 24 episode of American Idol. This week, the contestants were mentored by Idol alum, Gabby Barrett. First up, Jay Copeland performed “Just The Way You Are” by Bruno Mars. Jay, who was saved by the judges last week, got a standing ovation from all three this time around. “I feel this to be the closest thing to your artistry,” Lionel Richie gushed. “Tonight, this song was the one that nailed [who you’re going to be as an artist] right on the head.”

Next up, HunterGirl performed “Baby Girl” by Sugarland. As the only female country artist left in the competition, Hunter got some great advice from Gabby. “You have a heart of gold and a voice of gold and I just want to see you win,” Katy Perry told Hunter after the performance.

Country singer Dan Marshall took the stage next. He sang Kenny Chesney’s “She’s Got It All” for his top 14 performance. After some nerves during rehearsal, Dan pulled out a solid performance at the live show. “That’s how you do it, Dan,” Lionel told the singer. “I love Kenny Chesney, but that was your song tonight. You are sounding like a star.”

Next, Gabby helped Leah Marlene choose between two songs for her performance. She went with “Happy Together,” which had the judges and crowd going wild. “It really feels like you arrived,” Katy said. Luke also gushed over Leah’s growth on the show. “It’s one of the most inspiring things I’ve seen,” he admitted.

Ava Maybee: 5 Things About The ‘Idol’ Singer Who Is The Daughter Of A Famous Rock Star

The next artist to perform was Fritz Hager. Fritz sang “Let It Go” by James Bay. The judges raved over Fritz’s artistry. “That whole performance felt like I was at YOUR show,” Luke said. Following Fritz was Tristen Gressett, who sang Adam Lambert’s “What Do You Want From Me.” Gabby admitted it was a “risky” but “cool” song choice for Tristen. The risk paid off, as the crowd went wild, even though Tristen had a small “hiccup” with the song lyrics. “What you have now is stage presence,” Lionel said. “It was fabulous. I loved that performance.”

Lady K also sang a song by an Idol alum when she performed “I Believe” by Fantasia. Lady K got a standing ovation. “Honestly, elegance personified right now,” Katy raved. “The glow up is real. That was a beautiful song. All around, the growth is just incredible.” Lionel also said it was Lady K’s best performance.

Next, Allegra Miles sang “Ocean Eyes” by Billie Eilish. Allegra played piano during her performance and Luke gushed that she “nailed” her falsetto choices during the set. After Allegra, Ava Maybee took the stage to sing a Harry Styles hit, “Sign of the Times.” Lionel gave some constructive criticism to Ava, urging her to “get out of [her] head,” but the judges agreed that the second half of the performance was stellar.

After being saved by the judges last week, Mike Parker returned to sing “Hurricane” by Luke Combs. He hit a huge note at the end of the song that had the judges and crowd on their feet. “That was your stage, you made that stage yours,” Katy raved. “That was some authentic, country, soul singing.”

Emyrson Flora was up next. She performed Olivia Rodrigo’s “Driver’s License,” and channeled Gabby’s advice to “loosen up” as she took the stage. “It’s hard for me to even wrap my head around you being 16,” Luke admitted. “The way you sing is just so timeless and classic.” Next, Gabby urged Noah Thompson to change up his song choice that he connected to more than his original choice. He went with “Stand By Me,” and Lionel promised Noah that it was the right choice. “Your voice fit that song perfectly,” he gushed.

The final performance of the night came from Nicolina. Nicolina gave a stunning performance of “Hallelujah,” dedicated to her grandmother. “It was like watching an angel sing this beautiful song,” Katy admitted. “It was really, really beautiful.”

Throughout the episode, America voted for their favorite artists, and the top 11 was announced at the end of the night. The artists who were saved were: Leah Marlene, HunterGirl, Jay Copeland, Fritz Hager, Nicolina, Noah Thompson, Christian Guardino, Lady K, Emyrson Flora, Mike Parker and Tristen Gressett. That means, the three artists who were eliminated were: Dan Marshall, Ava Maybee  and Allegra Miles.