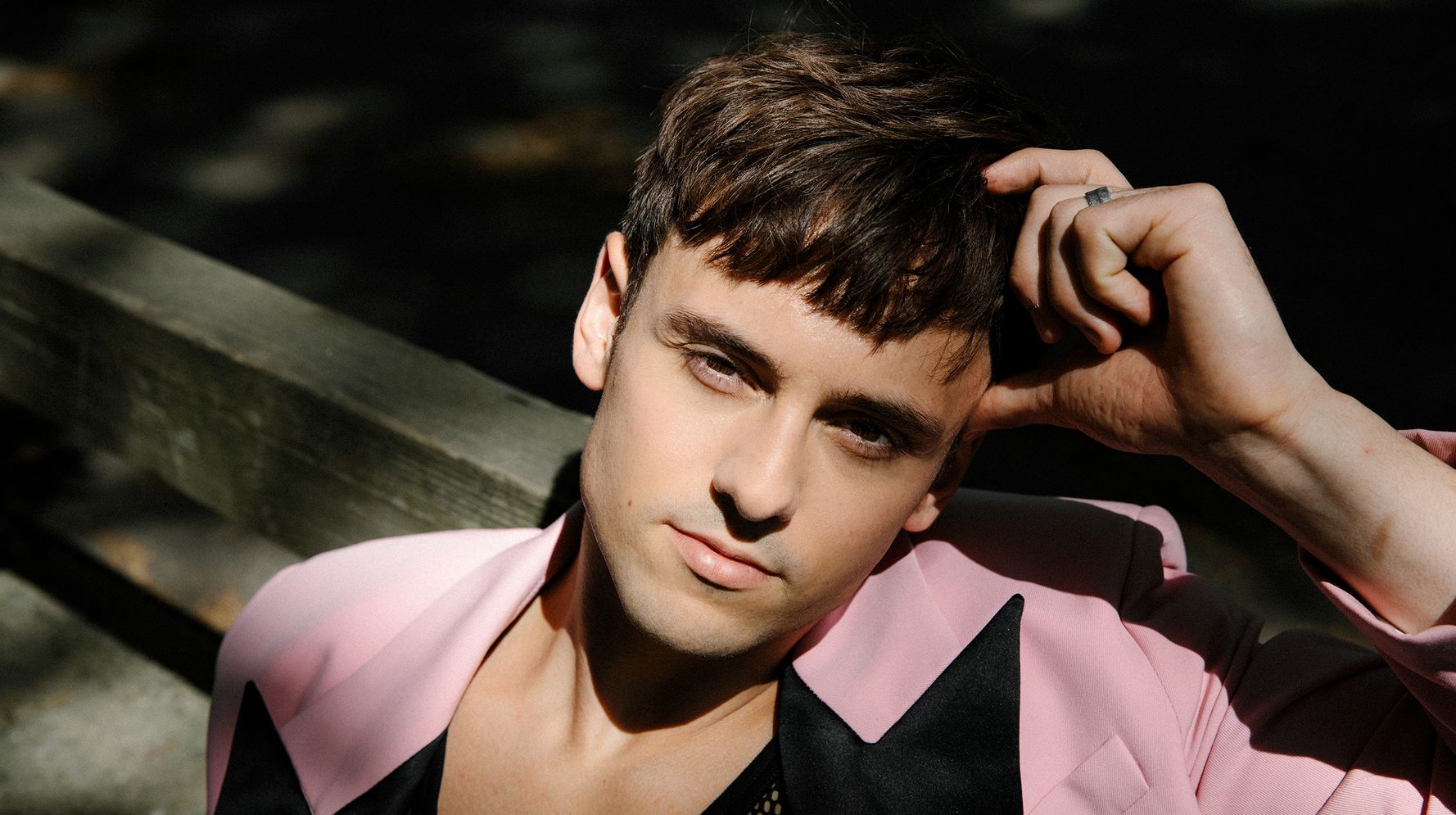 Nearly one year after winning an Olympic gold medal, Tom Daley has waded into the literary world ― and, for the first time, he’s ready to publicly acknowledge the vulnerabilities that lie beneath his record-smashing athletic prowess.

The 28-year-old British diver lays his emotions bare in a new book, “Coming Up for Air: What I Learned From Sport, Fame and Fatherhood.” Released in the U.S. last month, the book eschews the traditional memoir format. Instead, it’s a collection of 11 individual essays that delve into the triumphs and tribulations he’s experienced since being catapulted into the global spotlight. Each essay has a unique title — “Perseverance,” “Acceptance” and “Confidence,” among others — that refers to a personal attribute he says he’s developed in his years as a competitive athlete.

“I think it’s important, if you’re a visible queer person, to try and help other people and not just sit with your privilege,” Daley told HuffPost. “As soon as you start beating yourself up about making mistakes, you start to worry about making them in the first place. You stop taking risks and growing as a person.”

Fans will be thrilled to know that “Coming Up for Air” details Daley’s Olympic gold medal win in the men’s synchronized 10-meter platform at the Tokyo Olympics last year.

But he also opens up about grief, body image, family and his early fears when it came to embracing his truth as a gay man. He shares anecdotes from his marriage to Oscar-winning screenwriter Dustin Lance Black, referred to simply as “Lance” throughout the text. The two men are fathers to a 3-year-old son, Robbie.

HuffPost caught up with Daley while he was visiting New York as part of his “Coming Up for Air” book tour last month. Here’s what he had to say about the book, being an LGBTQ rights advocate and, of course, his love of knitting.

Unlike most memoirs, the stories in “Coming Up for Air” aren’t told in chronological order. Why did you opt for that approach?

Being an Olympian is one thing, but how can I take what I’ve learned as an athlete and relate it to everyday life? Because there are lots of parallels. It’s very similar to the goals you might have at school, the stresses that you might have at a job — the teamwork and team efforts. So I wanted to try and make it as easily digestible as possible, to have something that [readers] might be able to relate to.

You won a gold medal at the Summer Olympics in Tokyo last year. What was that moment like?

It was incredibly overwhelming because I’ve worked for 20 years to get there. It still seems very surreal that it even happened, to be honest. It’s the one thing that’s kept me going for so long, the thought of winning an Olympic gold medal. As I explain in the book, the next day was the first day that I woke up with a real sense of peace. It was a real sense of: “You know what? We’ve done it.”

You touch on the events that lead up to your decision to come out in a 2013 YouTube video. If you were to do it all over again, would you change anything about that process?

It was so freeing and had such an impact on my performance in a positive way that I wish I’d done it earlier. Back then, I was so scared. I was so worried about losing sponsors. My dad had died a couple of years before that, and I wanted to still be able to support my family. When people are telling you that you might lose sponsors, of course it’s going to scare you into staying in the closet for longer than you’d want to.

In the book, you mention that you and Lance were on a similar professional trajectories — he’d won an Oscar for 2008’s “Milk,” you won a bronze medal in the 2012 Summer Olympics — when you began dating. How would you describe your relationship now?

I’d definitely say we’re both dreamers. We dare to dream, and we dare to dream big. If I say: “I really want to do this,” he might say: “Why stop there? Dream bigger. Go bigger. Why not?” If we both want to do something, we’re like: “You know what? We’re going to work hard and make it happen.” We both know what it takes to get to the top level in what we do. I know we’re very fortunate, but we like to work hard and really just give everything our best.

As a queer person, do you ever wish that your personal milestones — getting married, having a child — weren’t scrutinized as if they were political statements?

I feel like all minorities, in some way … anything we do is in some way seen as being political. At the end of the day, all I know is that I love Lance and I wanted to marry him, and we felt really strongly about having a family. And now, we have our son that we love dearly. It might seem political to some people, but it all comes from a place of love.

[Marriage and fatherhood have] changed the way I prioritize things. Just being able to go to the Olympics and know that regardless of what happens, my family will love me and support me, takes a lot of the pressure off and allows me to actually enjoy it. And when I enjoy what I’m doing, I get the best results.

What do you say to young LGBTQ people who tell you that they look to you as a role model?

It’s quite overwhelming and I never really know what to say. When I came out, that was never my thinking. It was more like: “I just can’t deal with this anymore. I need to just say what I’m thinking and how I’m feeling.” To think that people might have watched my video and then felt safe and able to have conversations with their parents or friends … I never thought it would ever have that impact.

I’d be remiss if I didn’t ask about your knitting, and your recent foray into knitwear design with your Made With Love brand. Were you surprised by the attention it received?

My coach said I needed to find something where I could sit down, rest and recover, because I’m always someone who’s on the go. Then Lance said: “People on film sets knit sweaters. Why don’t you give it go?”

My personality just dove straight in. I didn’t want to do it half-assed. I was like: “I’m going to do this, and really learn how to do it.” I didn’t know anyone was going to be interested in my knitting. But now, being able to pass on my passion for knitting to other people through Made With Love … if somebody had told me five years ago that I’d be an Olympic champion and doing knitwear design … it just seems so surreal.

What are you dreaming about now, and what do you hope to achieve in, say, the next five to 10 years?

I’d love to be the main anchor of the Olympics broadcast for the BBC, or NBC if I’m in the U.S. I’d love to do a Fashion Week show with knitwear. I’d love to expand our family as well.

This interview has been lightly edited and condensed.