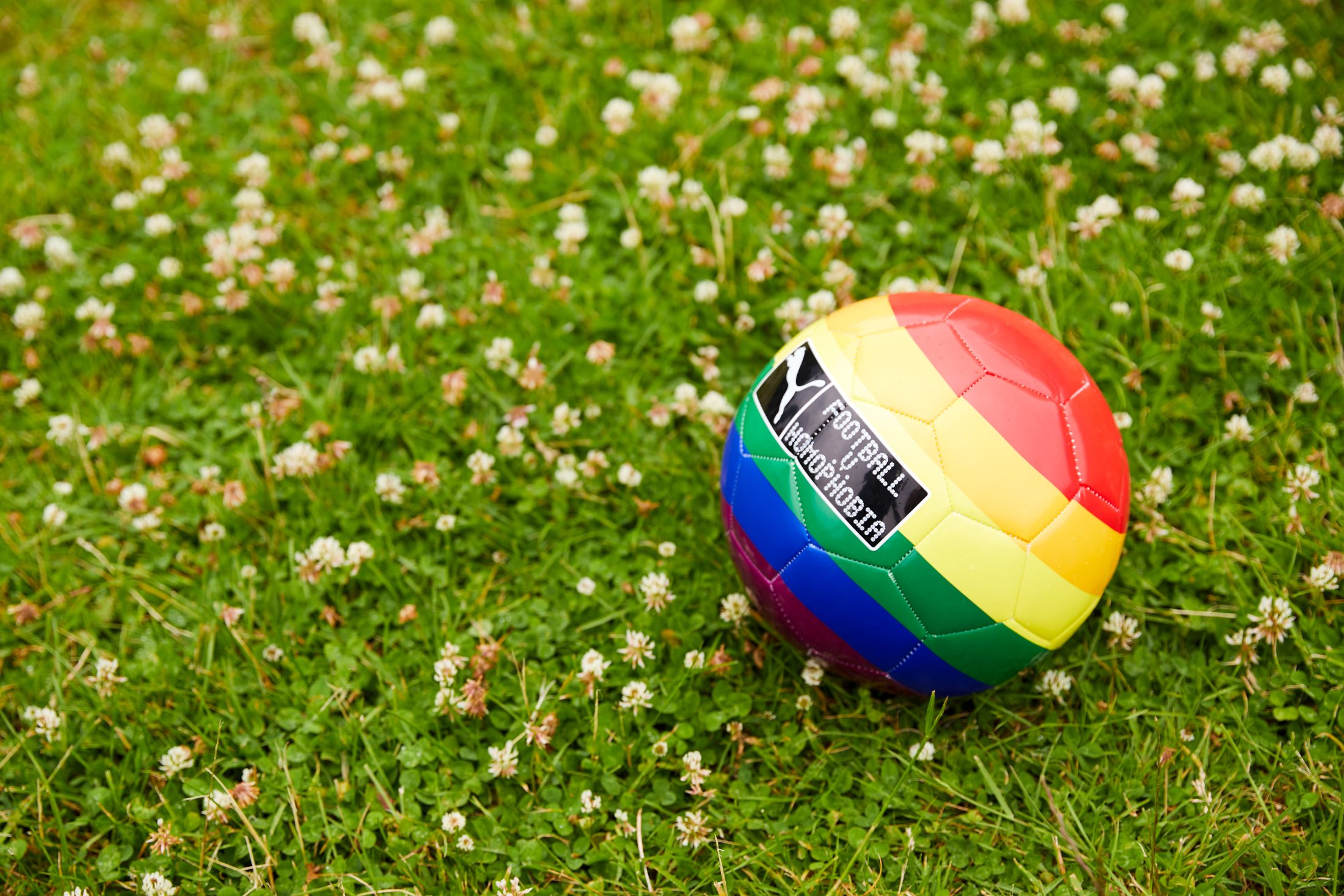 There’s a huge summer ahead for football, and size? want to be following the journey every step of the way as our nation comes together once more, this time behind England’s Lionesses. Women’s football is continuously gaining more and more of its deserved acclaim, and with coverage increasing, its set to be a summer to remember for the European football teams. England are tipped as one of the favourites, we can’t wait to watch Sarina Wiegman’s team do what they do best.

In celebration of women’s football, female fandom and the growing cultural and representational impact of the game, we’ll be teaming up with This Fan Girl for their must-see National Football Museum exhibition, which opens on 6th July.

This Fan Girl is an award-winning, non-profit digital platform run by a community of female football fans. Founded by Amy Drucquer and Laura Blake in 2016, the pair travelled around the country and photographed fans and the rich culture surrounding the game. Since then, the platform has evolved into something bigger, with its digital space having gained over 600 members. This goes to show that their influence on women’s inclusivity in football is growing along with the work they do.

A platform for elevating female voices in football, This Fan Girl regularly works with brands and organisations on campaigns surrounding the sport, which allows them to advocate for women’s grassroots football and in turn helps to push for a more inclusive future for football fans in a male-dominated environment.

Right on time for the start of the summer event, This Fan Girl Presents ‘The Pitch Gallery’ at Manchester’s National Football Museum. The exhibition takes you on a journey, exploring the growing cultural movement in the women’s game and those that champion it, and representing inclusivity for voices within football. As well as the exhibition, check out This Fan Girl’s Watch Parties and much more, covering each of the England games this summer! Keep your eyes open as size? will also be working with TFG and PUMA to bring you some very special events throughout July.

Also, in-line with this event, Amy from This Fan Girl caught up with one of Manchester’s most up and coming grassroots football teams – Rain On Me FC. A team that puts inclusivity at its forefront, ROMFC are here for all women and non-binary people that want to pull on a pair of boots and play. Part of the Alternative Football League – a space for all women, trans and non-binary people – keep an eye on ROMFC’s rise to the top. Have a scroll and read through Amy’s chat with Gina, from ROMFC…

Amy: Hello Team! Thanks so much for taking the time to have a chat with me. First things first, can you introduce ROMFC to us and a little about how it got started?

Gina: “ROMFC was started in 2020 and was started by our CEO Ella Thompson. She wanted to create a space that was inclusive for women and trans people and non-binary people. To get them in a space that’s safe where everyone can enjoy playing football.”

Yasmin: “This is a queer team but not everyone identifies as that, but everyone on the team respects that everyone can be whoever they want to be on this team.”

Amy: The name Rain On Me FC – is that a nod to Manchester’s famously drizzly weather or something else?

Charmaine: “We would love to say that’s the answer but it’s not. We just love Lady Gaga and that’s the truth. It started off as a bit of a joke between a couple of members of the team in the pub. I think Jen shouted it out and everyone said they liked it. It stuck and people like it.”

Gina: “The league we play in, everyone always sings Rain On Me at us – big Lady Gaga Stans.”

Amy: Are all of your players experienced ballers, or have some started playing as the club formed?

Gina: “Not everyone is experienced at all, some used to play it in high school or college; wide mix of experience but that is what is so good about it. It’s all different levels and everyone is welcome and there’s no pressure on anyone.”

Charmaine: “People can get involved at any ability and this is important, I think even the people that had played before, by the time we came to ROMFC, it took the pressure off.”

Yasmin: “We recently introduced bring your friend day too – that’s essentially, bring a friend, no matter what experience they’ve got, and just let them know that there’s going to be a lot of people who are bringing other people. Come join, come and have some fun and you might love it and want to come and stay with us.”

Amy: Grassroots football has seen an explosion in the last few years, with teams forming all over the country. What do you think has fuelled this growth?

Gina: “Sport needing to be more inclusive. Seeing more women and trans and non-binary people in sport. People want to get more involved in that, more pubs want to show sport that isn’t men’s sport.”

Charmaine: “I read a statistic not long ago, it said football is the fastest growing female sport and that’s amazing because I remember growing up, so many of the teams I played in folded.”

Amy: Your team recently joined us at This Fan Girl Having A Ball, and you didn’t win the official award but you won the award for ‘The Best Vibes’. What would you say the ethos at ROMFC is?

Charmaine: “We are just here having a good time.”

Gina: “Having a respect for each other, supporting each other.”

Gina/Yasmin: “Everyone is just a bit random, in an amazing way. Just being around a group of people, likeminded, and just getting on. Going to Manchester and you feel so famous, because you see so many ROM believers out there.”

Gina: “My friend lives in Sheffield and then the other day she was like “someone mentioned ROMFC the other day”, and I was like “how did that happen?”. So yeah, it’s just mental, it’s growing rapidly.”

Individually, what does being part of ROMFC give you on a personal level?

Yasmin: “It encourages me to just be my true and complete self, in a comfortable and safe place. In being myself, it allows everyone else around me to be like “you know what, I can jump on that, I can be as much the authentic me that I can be which in some certain places, I don’t feel comfortable doing and being”.”

Charmaine: “I think for me, obviously lockdown was tough for a lot of people, that feeling of being isolated and not having people around you. Coming into an environment where you feel like you are part of something. I felt so supported by everyone on the team, like I’m currently going through injury, and every step of the way, people from ROMFC have been there for me, offered to pick me up from hospital, offered to bring me things. I had more people come to my house from ROMFC than people outside of ROMFC. Everyone makes you feel very special and treats you as an individual.”

Gina: “Just having a sense of importance and doing something that you love. It’s a great feeling to have that on the pitch but off the pitch as well. It’s just good vibes.”

If somebody wants to join ROMFC – how would they do it?

Gina: “So, you can drop us a message on Instagram, and then we’ll give you the details of training and after you have come a couple of times we’ll ask you to read and sign the constitution which has all of our rules and regs in. We’ll ask you to sign that then we also have a medical form in case you have any injuries or allergies. It’s £2 per week, and that goes towards many different things like hiring pitches, kits, giving to charity, first aid supplies. We want to make it as inclusive as possible; we want everyone to be able to access it.”

Charmaine:  “We also understand that committing to a sports club is a commitment and we want people to come and enjoy and not feel that pressure as well.”

Yasmin: “I work shifts on a rota, and I can’t be there every Sunday and that’s completely ok, it’s completely allowed. This is respected and it’s the same for everyone – we have busy lives and have busy jobs, just turn up as and when and have a ball, quite literally.”

With a huge summer ahead for women’s football, what’s next for Rain On Me?

Charmaine: “I think, obviously summer is going to be busy with the football, and going down and watching some of those matches. I think from the connections we’ve formed with other clubs this year, we were talking about trying to get a mini tournament going, get some fixtures with other teams out of Manchester because it’s been great to meet so many different people. Get as many teams involved and make our community even bigger.”

Check out our blog and socials for more content.