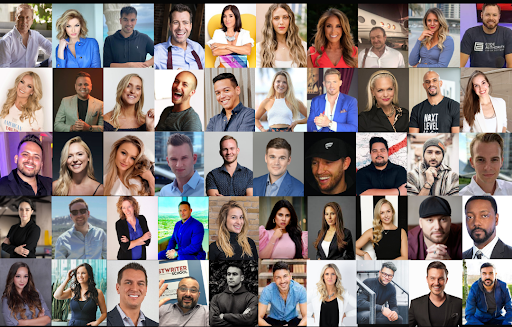 How the world does business has been turned on its head the past two years. These 50 top entrepreneurs are the people to watch and learn from to learn how they thrive in the digital economy.

The demand for remote work and automation with AI is growing, fueling the rise of innovations such as Defi & NFTs. With new policies in place on major advertising platforms such as the iOS 14 updates, established players in the space will be some of the most interesting people to watch in 2022 to see how they navigate their businesses during these uncertain times.

Here are the movers and shakers who have overcome tribulations and pivoted to achieve great things while continuing to set trends and innovation in their industries.

As the former president of Success Magazine, Don has been quoted for over 35 years as one of Realtor Magazine’s “Top 25 Most Influential People in Real Estate after training over 1 million agents.

Bestselling author of the book Build An Empire and in-demand speaker, Elena has traveled the globe sharing her insight and experiences building an empire with her husband Grant Cardone whilst creating an extraordinary life for her family.

As a #1 WSJ Best Selling Author, pioneer in multilingual marketing, and expert in scaling companies through Google Ads and SEO, Imran has built his top-rated East Coast marketing agency on the belief that trust is everything.

Known worldwide as the “Super Connector”, Chris has built his brand on teaching thousands of people how to build genuine relationships. He’s used this principle to sell a company for $1.7 billion and become editor at Thrive Global.

After Sofia and her husband Bobby turned an $1800 investment into a one-billion dollar company, she discovered the power of multi-family Real Estate and has since built over $400 million in cash flow positive Real Estate.

#1 Multiple WSJ Best Selling Author, Aimee has built a name for herself by consulting billionaires and celebrities wives on a variety of subjects from holistic health to personal image branding.

After surviving stage 3 cancer, Barbara rose to national fame as the “Curator of the Good Life”, inspiring audiences to get out of their own way & live their best life with purpose, style and adventure.

CEO of Primal Steakhouse. After building one of the most innovative spaces in Las Vegas, this serial entrepreneur discovered how to turn a basic restaurant into a unique medieval experience that families and kids can’t get enough of.

As a finalist on The Apprentice UK, Sabrina built her own viral PR campaigns that took her Shopping Slot tech company to 3 million views in 6 weeks. She now helps others build wildly successful brands through Public Relations.

Akemi quickly became one of the most trusted and sought after e-commerce consultants in the world after her agency, Love & Launch, helped startups to Fortune 500 companies achieve over $2 billion in sales through various e-commerce platforms.

CEO of Unicorn Innovations, Jeremy went from waiting tables to creating an industry-leading food truck business that landed him on Forbes’ 30 under 30 and became founding partner of Quantum Media with Shark Tank’s Kevin Harrington and Maxwell Finn.

Gretta launched her first successful startup SkinnyMe Tea at the age of 22 with $24 in the bank. Her bravery paid off, with SMT exploding to sell over 11 million cups of tea worldwide in 5 years.

#1 WSJ Best Selling Author and founder of Authorsunite, a book marketing company that scaled to 7 figures through partnerships and utilizing his network of joint venture partners, Wagner now teaches other entrepreneurs how to do the same.

Deemed the #1 leader in Instagram Growth Hacking, Josue has built a 7-figure company using Instagram and helps others do the same. His expertise has led to endorsements from Grant Cardone, Les Brown & speaking on Russell Brunson’s stage.

After turning her fitness-coach side hustle into a seven-figure business by 23, Lauren now helps others achieve the same success in their businesses. Lauren stresses the importance of creating a need for your brand with your clientele.

Justin is the youngest board member of the MBCEA (Metal Building Contractors and Erectors Association) and owner of an 8-figure construction and real estate company that employs 90 people in over 10 states.

JB is a world-class speaker, 17-time bestselling author, publisher, and global business owner. She is the Founder and CEO of Ignite Moments Media and Ignite Publishing – responsible for publishing over 700 authors to date.

From failing in school to facing an ADHD diagnosis and years of drug and alcohol abuse, Jeremy now dedicates his life to helping others bounce back. He’s spoken to millions and trained thousands on launching their own speaking career.

After leaving her hometown on a one-way ticket across the world and growing a successful consulting business while having three babies in three years all by the age of 26, Lauren empowers entrepreneurs to share their stories.

Zach had an interest in finance since he was a child that led to an early college start at 16, followed by a Doctorate. In 2020, Zach met Joshua Kiley and formed the popular online financial educational company CEO Watchlist.

CMO of FluidFi and content creator for coinmarketcap, Jessica is a highly skilled media professional with significant experience in the gaming and emerging tech sectors. She has worked with and managed several international media teams.

Anna has built one of the fastest growing at home service companies for Dog Grooming especially during the pandemic as all the grooming salons were shut. The convenience and full control for pet owners to have this at home means they will pay a premium even as we slowly return to normal from the pandemic.

Founding Partner, Security Token Group & CEO, Security Token Market. Kyle is an advisor and investor who, after working with blockchain technology since 2015, speaks around the world as a thought-leader in the security token space.

Bailey is an expert in scaling through paid advertising. After scaling his own ad campaigns to over $5000 a day to sell high ticket offers, he learned specifically what works for KPI optimization points and target objective to spend ratios.

Through his company Fluent Conveyors, Jeremy helps companies reduce their downtime and increase production with high quality conveyors. He’s known as an industry leader for building trusted relationships with dealer and reseller networks.

Founder of Convert ROI, David’s expertise lies in the psychology of running high converting Facebook advertising campaigns. David’s proprietary methods of “Contextual Congruence” are responsible for millions of dollars in revenue for his clients every year.

Co-founder of Valhalla Coop Farms and founder of Superhero Academy, Marc is dedicated to making an impact through his community on a farm outside of Montreal, Quebec, Canada. He teaches others how to build a self sustaining lifestyle.

A leading DEI driven entrepreneur in Latin America, Ximena is the CEO & Founder of EQUALS TRUE, and the co-founder of ATHENAWORKS. Both are dedicated to the empowerment of minorities, women and the disadvantaged in the technology industry.

Cofounder of CEO Watchlist, Joshua is a genius at content creation and works with co-founder Zachary Trebbi to simplify the complexity of investing and the stock market for new investors. He’s passionate about helping people change their financial trajectory.

International best-selling author of The 4 Week Vacation™, Sabrina is the founder of Tap the Potential and host of the Profit by Design podcast. She’s on a mission to disrupt the traditional story of “hustle culture” in entrepreneurship.

Multiple Best Selling Author and public speaker Jeremy is a force to be reckoned with as a serial entrepreneur who’s built multiple seven-figure companies with zero ad spend, all through deep directional relationships.

After amassing billions of impressions through her own video content and averaging over one billion views per month for her clients, Shay now focuses on helping business owners use organic video content to close more deals on Linkedin.

What started as a fitness coaching business quickly changed after Maria took her coaching profits, started investing into crypto, and grew a 7-figure income. Maria now teaches others how to make 7 figures a year through crypto.

Kerri Kasem is a multimedia personality and humanitarian. She is the preeminent advocate against elder abuse in the United States as founder of the Kasem Cares Foundation  – fighting against guardians that attempt to exploit seniors and separate them from loved ones.

Emilie pioneered social ecommerce upon co-founding Shopping Roulette. Coming from the events and fashion industry and working with the Kardashians and UK Royal Family inspired Emilie to create customer experiences that the VIPS are used to.

Being the #1 affiliate in the world for the Clickfunnels and Moonstream Investment Newsletter, Keala knows how to implement systems, funnels and traffic in a way that gets massive results. Keala also teaches others how to do the same.

Maggie is a Functional Medicine Nurse Practitioner and health consultant. She is the founder and CEO of Celproceo, a cutting-edge health and wellness agency rooted in functional and integrative medicine, trusted by celebrities, professional athletes, and executives.

Brian is the CEO of The Pavement Group, which is the largest pavement company in the east coast as well as Top Contractor School. Brian believes in utilizing direct response marketing strategies as well as hiring the top talent with the best customer service will allow you to scale any company.

Nick helps motivated thought leaders increase their impact and income by crafting a consistent message and using a proprietary content-creation process to create books, articles, and other content that build deep relationships with their audience.

After growing up poor in a military family, Kentaro started freelancing as a web designer which grew into an international digital marketing agency by the time he was in his early twenties, allowing him to exit for 7 figures.

Jay Jay is an engaging speaker who captivates crowds globally and teaches on personal branding With over 57 million views on YouTube and one million followers on Instagram, he teaches how to show up with consistency and positive energy.

As a digital nomad and social media expert whose clients have been picked up by Forbes and CNN, Elizabeth believes that strategy is crucial for success on each platform if you want an ROI rather than arbitrary numbers like engagement.

Brandon is the founder of 787 Coffee Co, one of the fastest-growing coffee shops in the USA and Puerto Rico. What started in Manhattan has expanded to 7 locations in under 2 years by putting their customers first.

Colin is obsessed with helping entrepreneurs sell from stage in a way that is neither pushy nor sleazy. He keynotes at conferences around the world on topics like persuasive communication ideas. His clients include Coca Cola, Suncorp, and Fuji Xerox.

Mark is a best selling author, founder, media & news publisher and editor-in-chief at MSP News Global where he oversees the company’s media and intersection with global business leaders. He helps people get placed in major TV and podcasts.