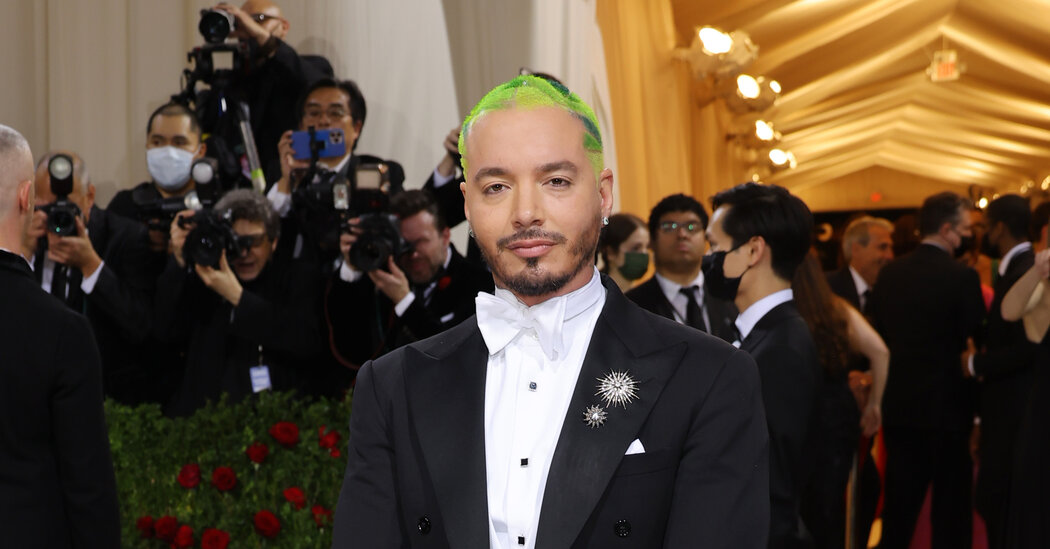 One night last fall, J Balvin, the reggaeton rapper, shared a photo of the back of his bare neck. Deep red imprints formed a kind of collar as if someone had tried to choke the Colombian superstar with scalding hot chains.

In reality, Mr. Balvin had just come from his first Met Gala, at which he’d worn a cartoonishly large stack of brightly colored bejeweled necklaces for several hours.

This time, Mr. Balvin is trying something new. Instead of a tuxedo covered in a fantastical kaleidoscope of floral embellishments, he wore a couldn’t-be-more-classic tux by Ralph Lauren: black, with tails, over a white shirt and bow tie.

This time, he also did not cover half of his face with a trendy balaclava (a look that Mr. Balvin said made him feel as if he “was there but not there, like a ninja”). Rather, he walked the carpet with a cane from Ralph Lauren’s fall 2012 collection. His lapels were adorned with vintage brooches, complementing his vintage watch chain, vintage studs and vintage cuff links.

“It’s a whole different look than how I normally dress,” Mr. Balvin said, adding it was a “more serious and elegant” version of the playful style he has become known for, whether attending an awards show (wearing a monochromatic radioactive-yellow suit); performing onstage (in silky orange shorts, with a matching bomber jacket and bucket hat); or sitting front row at a fashion show (in a maxi puffer skirt).

A few days before the Met Gala, in a fitting for his formal Ralph Lauren look, Mr. Balvin said he realized, “I’ve never seen myself like that.”

In this way, Mr. Balvin reflects a larger trend on this year’s “gilded glamour” carpet: Celebrities who’d normally be expected to go big and bold — for an event that has essentially become the world’s most extravagant, and exclusive, costume party — are paring back. The rapper said he welcomed the opportunity to show his “versatility.”

Yet Mr. Balvin is still Mr. Balvin. For the Met Gala, his buzzed head was dyed neon green. (It was cut with shades of pink for Coachella; before that, he’d dyed it blue and added a KAWS-esque red heart for the Grammys.)

Mr. Balvin wanted some contrast, he said — to bring a piece of the future into the Gilded Age, “with some details that are more in my DNA.”