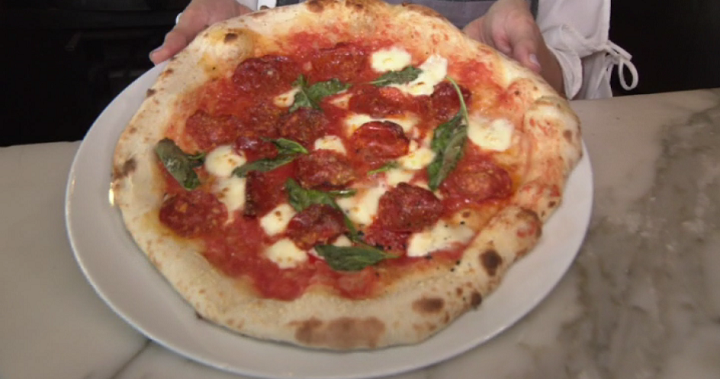 Before friends arrived for dinner last week, the household was in a tizzy. My wife was agonizing over the correct preparation of a lovely and hideously expensive bone-in rib roast while simultaneously researching an exotic form of butternut squash she was determined to serve as a side dish. What about the gluten-intolerant vegan who was coming? And what about the wine? A red, obviously. But should it be a Malbec or a cabernet sauvignon?

Meanwhile, my tizzy involved finding the correct music for the evening. I not only had to set the right mood for a cautiously-coming-out-of-COVID get-together also because the music would affect the way everything tasted. Any incorrect choices could potentially ruin my wife’s hard work in the kitchen. Just as she worked to pair the side dishes and the wine with the roast, I was pairing the evening’s music with the meal.

Music-related stories from the Russian invasion of Ukraine

It’s been known for centuries that music can affect the way we eat, drink, and enjoy what we consume. This knowledge goes back centuries. Taverns and pubs developed drinking songs because once people got into it, they drank more, which was good for the bottom line. Today, music researchers have proven that people in a bar will stay longer, drink more, and spend more money if traditional drinking songs are played in the bar.

The rhythm of music affects the way we eat. The faster the tempo, the quicker we tend to chew. That means we eat faster. And if we eat faster, we’re in and out of the restaurant quicker. If you run a fast-food place that depends on turnover, that’s what you do.

The inverse is true, too. The slower the music, the slower we eat. We linger. That might also lead to another bottle of wine, another couple of cocktails, a decision to have dessert, a cup of coffee, or maybe a spot of brandy. Five-star restaurants know how to exploit this trick very well.

But not only does music affect the speed at which we eat and the quantities of food and drink we order, but it also affects how food and beverages taste. This is why you have to take into account the frequency range of the music that’s played.

I did a wine tasting with a wine club a couple of years ago. Nine wines were laid out — reds, whites, roses — of different varietals. They tasted each wine while listening to different songs. Those nine wines might as well have been over 20 different types because I was able to change how the same wine tasted from sip to sip. The effect was instantaneous.

Depending on the song, any given wine was more acidic, sweeter, had a fuller taste, different finishes, and even a different aroma. And if I turned the music up loud, taste perception was impaired. In all cases, the wine tasted better when accompanied by the right music than with no music at all.

(For the record, research has shown that the best music for sipping a Chardonnay is California Girls by the Beach Boys and Tina Turner’s What’s Love Got to Do with It. Cabernet Sauvignon pairs very well with People are Strange by The Doors. A merlot? Easy by The Commodores. And if there’s a Syrah on the table, go with the Chariots of Fire theme. Trust me.)

You don’t have to wait for a fancy dinner party to experiment. The next time you go through a McDonald’s drive-thru, notice how that Big Mac tastes in the car vs. how it tastes if you were to eat in or wait until you got home. And if you can do it without crashing, much on that burger while flipping through different songs on the radio. You will notice how things change.

Does a pizza taste different if you eat in or have it delivered? If it tastes a little flat a home, put on something funky like Prince. It’ll perk up immediately. And if you like beer, you can experiment with that, too. If you want it to taste sweet, go with a ballad sung by a soprano. If you want the sour tastes to come out, choose a song sung by a baritone.

Music doesn’t necessarily alter the taste of all food. Vegetables tend to be low-energy-density foods. Studies show that music will not encourage people to eat their vegetables. Vegetables tend to be “non-emotional” foods. Playing music won’t help with, say, bell peppers. They taste the same no matter what music is playing. However, if we’re dealing with chocolate — a highly emotional food — music with high frequencies will bring out an incredible amount of sweetness.

Finally, let’s go back to how restaurants use music for customer management. Perhaps the best example is Chipotle.

As a high-volume quick-service restaurant, Chipotle restaurants are designed with communal tables and hard seating surfaces. This subconsciously urges people to eat up and get out, creating a steady turnover. But that’s just one part of the decor and the business plan.

Steve Ells, the founder of Chipotle, had music in mind from the very beginning. He approached a company called Studio Orca to create monthly playlists for the restaurants. Chipotle has a dedicated music curator named Christopher Golub whose job is to program music for their restaurants. This music is piped directly to each franchise location. Tempo and volume change throughout the day.

What’s more, is that the music is carefully curated so it sounds good in a place with an open kitchen and the hard surfaces (glass, concrete, wood, and stainless steel) that grace every Chipotle location. For example, you will almost never, ever hear a Radiohead song in a Chipotle. That’s because most of their songs sound abrasive within the confines of the metal and concrete décor.

This works so well that there’s a Chipotle Facebook page devoted to fans of the music played in Chipotle restaurants. People love the eclectic mix of songs that you’re going to encounter plenty of people Shazaming the music while they’re enjoying a nice carnitas burrito.

Has this approach helped make Chipotle successful? Well, the company has over 3,000 locations and annual revenues of US$5.6 billion.

In praise of — and a plea for — better sounding music

Other fast-food companies have moved in this direction. When McDonald’s revamped the internal playlists used in Swedish restaurants, sales went up by nine per cent. Meanwhile, in England and Scotland, franchises started playing classical music in the evenings. This not only had the effect of repelling loiterers but also provided a calming atmosphere for those who just want to enjoy some late-night Chicken McNuggets. Once they’re done, they might go back and order a coffee. And yes, sales have gone up.

If you work in the food service industry and don’t agonize over the music you play for your customers, you might want to start thinking about it.

And for the record, my wife’s choice of a particular Cabernet Sauvignon went very well with the rib roast and squash and the whole meal got raves from the guests. Only I know that I goosed everything with my playlist.

Alan Cross is a broadcaster with Q107 and 102.1 the Edge and a commentator for Global News.