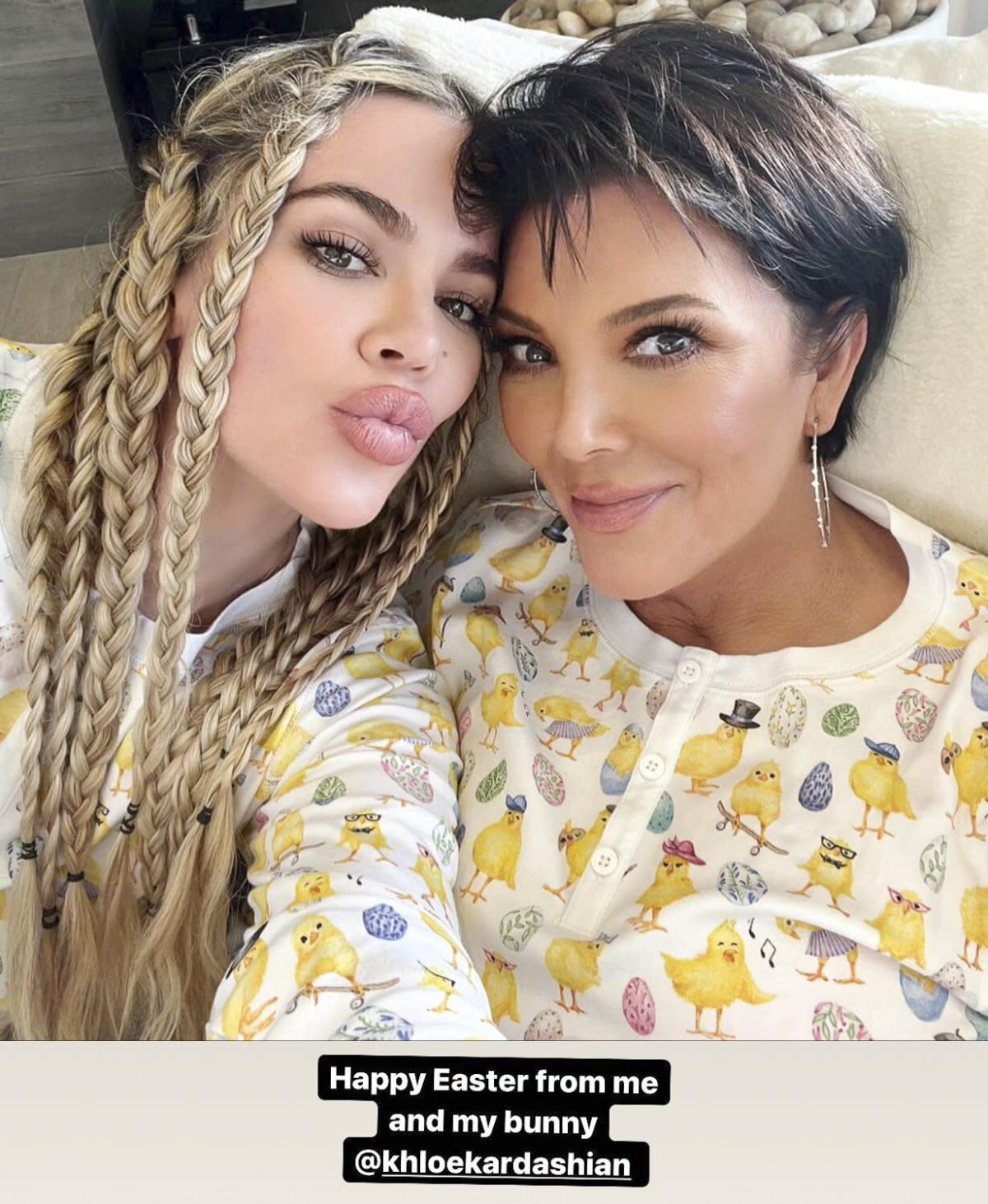 The Kardashian/Jenner family celebrated Easter in the style of Kris Jenner on Sunday.

The Kardashians stars got together at the momager’s house to observe the spring holiday with each family member being served their own giant chocolate egg with their name engraved on it!

“Oh my gosh, look what my mom did. She has chocolate eggs for all the kids…for all the grown-ups too,” Kim Kardashian said in a clip she posted on her Instagram Story.

The footage also displayed an eccentric table arrangement filled with Easter decorations and treats, including flowers, more eggs, candies, and cute and colorful cutlery sets. The SKIMS founder, 41, also showed off the presents and goodies that Kris, 66, had prepared for each of her family members in honor of the holiday.

RELATED: Kim Kardashian Shows Off Easter Banquet Display and Gets a Lesson on Pickles from Stephanie Shepherd

Kylie Jenner joined the festivities by posting the beautiful decorations at her mom’s house on her Instagram Story. Meanwhile, Kourtney Kardashian also shared the table setup showing the Easter eggs with her and her fiancé Travis Barker‘s names beautifully carved on them.

Kris proudly posted her fantastic party at her residence via an Instagram Story, including one picture of herself with Khloe Kardashian wearing matching outfits.

“Happy Easter from me and my bunny @khloekardashian,” the mother of six wrote in the caption.

Khloe, 37, also shared a glimpse into the family’s celebration of the Christian holiday, posting clips of her daughter True Thompson partaking in an egg hunt.

The family recently celebrated the premiere of their new flagship Hulu reality series, The Kardashians, at Goya Studios in Hollywood earlier this month.

The family is continuing to grow after Kylie, 24, welcomed a baby boy in February with Travis Scott, with whom she also shares 4-year-old daughter Stormi Webster.

Last month, a source told PEOPLE that Kylie has become “extra mellow” since welcoming her second child, adding: “Becoming a mother of two has softened her even more.”

“Kylie’s such a good and nurturing mother. She really is the best mom and is always hands-on and doing things herself for the baby and Stormi. She’s super sweet with those kids,” the insider said.

If Kris has her way, daughter Kendall Jenner will be the next to try out parenthood, admitting on The Ellen DeGeneres Show that she hopes the model will give her a 12th grandchild.

“Well, I think it would be nice if it was Kendall, right? She’s the only one who hasn’t had a baby,” Kris said in February. “I think she would eventually love to have a baby.”

Kendall, 26 called her mom out last week on E! News’ Daily Pop about pressuring her to get pregnant. “She will just randomly text me and be like, ‘I think it’s time,’ and I’m like, ‘Is this not up to me?!'” she said, as Kris added: “Just your friendly reminder!”

The family is also preparing for a wedding after Kourtney, 42, and Barker, 46, got engaged in October when he popped the question on a beach in Montecito, California. PEOPLE previously confirmed their relationship in January 2020.

Kourtney tied the knot with Barker during a “practice” wedding ceremony earlier this month at One Love Wedding Chapel in Las Vegas after attending the Grammy Awards together.

The Poosh founder later clarified that the ceremony was not legally binding since they did not have a marriage license. A few days after the ceremony, Kourtney shared a series of photos from the impromptu wedding.

“Found these in my camera roll. Once upon a time in a land far, far away (Las Vegas) at 2am, after an epic night and a little tequila, a queen and her handsome king ventured out to the only open chapel with an Elvis and got married (with no license). Practice makes perfect,” Kourtney wrote.

RELATED VIDEO: Here’s a Look at the Highlights of The Kardashians Premiere Episode on Hulu

A source recently told PEOPLE that the couple plans on taking a more intimate approach to their nuptials, although Kourtney’s famous family wants to be a part of the festivities.

“They don’t want a big wedding. They want an intimate ceremony and party for family and close friends. Kourtney’s family wants to be a part of it,” the insider said, noting that since it’s her first wedding, the Kardashian/Jenner brood “wants to throw her a bridal shower, a bachelorette party, and celebrate as much as possible.”

RELATED: Kim Kardashian Says Ex Kanye West Wanted to ‘Quit Everything’ and Be Her Stylist

Meanwhile, Kim has been dating Pete Davidson, 28, and the couple continues to get serious. They were first romantically linked when they were spotted holding hands on a rollercoaster last October at Knott’s Scary Farm in Buena Park, Calif. They also shared an onscreen kiss earlier that month on Saturday Night Live when she made her hosting debut.

New episodes of The Kardashians drop on Hulu every Thursday.