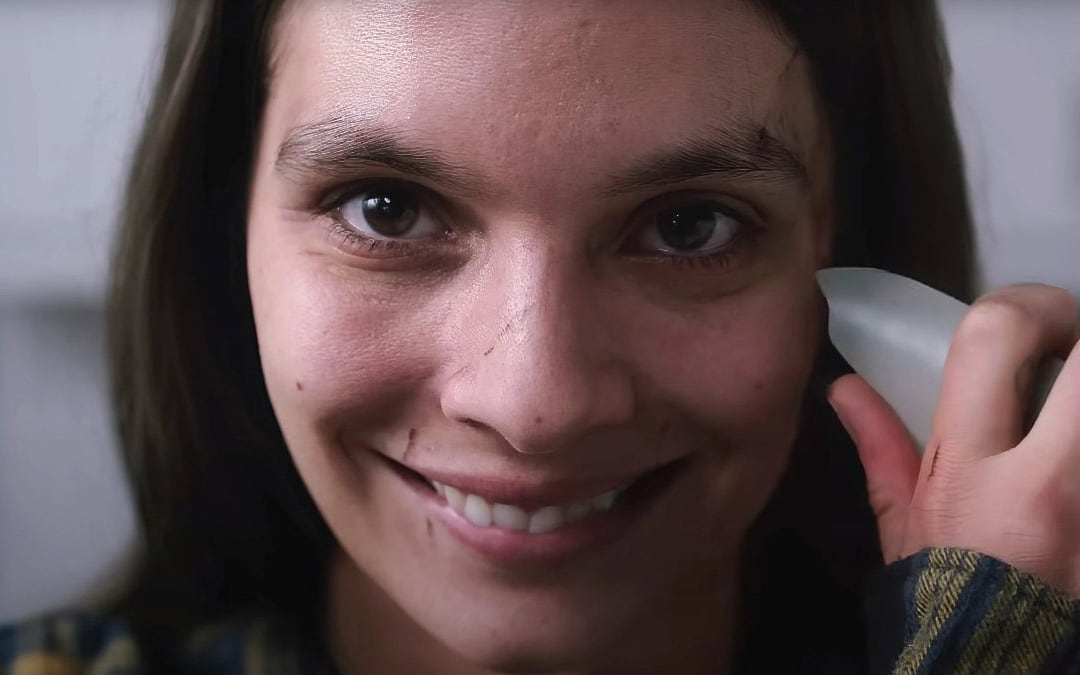 The most general sign of happiness, satisfaction, and hope is the latest good to be twisted into terror in the aptly titled horror film Smile. Director Parker Finn has taken a universal expression of goodness—lips bent skyward, teeth reflecting light—and made it the central articulation of horror. Smile is an impressively raw survey of trauma and mental health; its ending subverts a cringeworthy, feel-good climax to convey the deep incapability of the human will in fighting our own battles.

2022 has been a stellar year for horror. With films like Barbarian, The Black Phone, Pearl, and Nope (which has some powerful theological themes) in the rounds, the horror genre has been graced with unique frights and poignant messages. Smile is the latest in this rotation to offer something original and deeply meaningful. Not to mention that its plot and finale are consistently heart-stopping.

Dr. Rose Cotter (Sosie Bacon) feels the weight of nonstop work in the ER psych ward when a case makes its way to the ER that is distinctly peculiar—even to the doctor who helps people like Carl, who struggles with a profound paranoia about death. Laura Weaver finds solace where the walls of Dr. Cotter’s exam room meet. As Rose beckons her from the corner, Laura begins to explain that she witnessed the suicide of her college professor; he was smiling as he did it. Now she can’t stop seeing people smiling—and can’t tell what’s real and what she might be hallucinating.

Amid a mental breakdown, Rose calls for help, only to turn and witness Laura’s smiling suicide. As she soon learns, this continues a frightening legend that an unnamed entity leeches off of trauma. The film follows Rose as she descends into madness, running from an entity that feeds on her trauma and will eventually convince her to commit suicide in public, prolonging its life.

Themes of possession and demonic influence are epitomized in the horror genre, but Finn’s intentional obscurity on the nature of the entity is original and refreshing. The sole flag that the entity plants marking its presence is a smile—which makes every blurred face in the background of a zoomed-in profile shot, every implied presence of a counterpart in conversation, terrifying. At any moment, someone could smile. This film blends the demonic trope with a highly effective take on psychological horror.

As Rose descends into chaos, she has to apply to herself what she prescribes for others: she has to face her trauma. The film’s preliminary exploration of Rose witnessing her mother’s overdose fuels both her career as a psychologist as well as the entity’s source of life until it transfers to the next traumatized host.

After hallucinating many things (threatening phone calls, Laura’s reappearance in her home) and seeing some terrifying realities (her dead cat in the place of a train set, wrapped up for her nephew), Rose does her own research into the entity’s past victims with the help of a police friend, Joel. She finds an escape plan in one man who lived! All he had to do was murder someone in front of a witness. It didn’t stop the entity’s progression, but at least he’s alive in prison. This poses a clear ethical-moral conflict that Rose now has to navigate under the mental affliction of the entity’s pursuit. In a moment of torment—she can’t take the weight of trauma and hallucination anymore—she decides to murder someone in front of a witness.

This is a daunting, dark development for the film to make. Rose is driven to selfishness and moral compromise (it’s clear she doesn’t want to) in order to preserve herself from the agony of the entity. She kills Carl, stabbing him at least twenty times in front of her boss with tears, then anger, cascading down her face. Then—she opens her eyes to find herself in the car outside of the ER. It was all a hallucination, but a traumatizing one. It goes to show that whether in self-harm or the harm of others, the entity only produces copies of itself—it makes disciples of death and trauma until it has its fill. Is this not the same of sin?

Children of wrath beget children of wrath (Ephesians 2:3), filled with hate that spews out into mutual, communal hatred (Titus 3:3). This sin-stained self- and others-oriented hatred is the source of our trauma. We’re hurt by our own actions or those of others, but therapy helps. Medicine helps, but it doesn’t remove the entity of our own sin from within us. It’s terrifying, confronting an evil around us, daily permeating our thoughts and lives. It’s hard to stop the cycle.

The film’s hopeless ending is the best part. That may sound dark and non-Christian, but allow me to explain. After hallucinating the feeling of killing, Rose resolves not to murder Carl to escape the entity—a moral victory in the film. Her good intentions compel her to her childhood home to face her trauma alone, thereby ending the line of the entity’s progression. This further solidifies our protagonist as someone worth cheering on—someone good.

She faces the hallucination of her mother blaming Rose for her suicide, doubling down on the fact that it isn’t real. The entity manifests itself from her mother, chasing her down in an all-too-real manner. Rose, in a moment of courage and for the first time truly facing her trauma, says, “I can’t get you out of my mind, but you can’t leave either.” As she takes control, she slays the beast (both the entity and her trauma). This pseudo-ending gives service to the film’s arc toward overcoming long-running trauma. Rose’s entire life has been a battle of overcoming trauma and helping others do the same, and in this moment it seems that she defeated a monster bigger (and more evil) than she could have possibly imagined.

That this was all another hallucination—she’s still at the house, Joel finds her shaken to her core—is a testament to the darker trajectory that Finn intended. Fans might have been infuriated when he took away their happy, victorious ending, but he reminds them that he’s a horror director, not a feel-good writer. In an interview with CinemaBlend, he says, “I don’t love it when the ending is tied up with a bow. I like messy endings that can deliver an emotional catharsis . . . I hope it’s a gut-punch for everybody.”

Smile ditches a hopeful ending and utilizes the altruistic hopes of the audience to deliver a dreadful blow in the film’s final minutes. If viewers managed to suspend their hope for crushed evil and prevailing good, for overcoming trauma and restored mental health, then they would have found this film predictable. Throughout the plot, the entity’s rules of play are listed: it feeds on trauma, its hosts are always witnesses of a traumatic event, it causes mass hallucination and paranoia. The ending followed these rules.

That the film’s true ending was such a crushing, frustrating blow speaks to an inborn desire in humanity for good to triumph over evil. As humans made in the image of God, we know the truth and the way the world should work. God’s principles are written on our hearts, though in sin we suppress them (Romans 1:18; 2:15). It’s also clear throughout history and within our own personal experience that evil runs rampant, often unchecked, and we need something external to destroy it. This film takes us on a journey of resonance with Rose, hatred and fear of unbridled evil, and eventually a feeling of anger when it isn’t overcome with willpower in the end.

Yet that’s where the film’s message is crystal. As a result of sin, humanity has always been incapable of overcoming evil on our own. The things that torment us—the evil that follows and flows from us—can’t be overcome by something within us. We need something unstained by evil.

If Smile and human history agree that evil begets evil and the only one to stop its generational passage must be free of the stain of wrongdoing (and the trauma it produces), then the options are one: the God-man, Jesus Christ. As God, Jesus is all-powerful, holy, separate from the power and effects of sin. As a man, Jesus surrounded himself with the effects of sin (trauma, even), sinful people, and eventually died for sinful people. The sinless savior “became sin” when he bore God’s wrath in the place of mankind (2 Corinthians 5:21).

Smile’s frustrating finale tugs at our innermost longings for justice and goodness to prevail, while reminding us that such things can only be championed in Christ. We are saved from the power of the Devil and the sin within every human by the love and grace of Jesus Christ alone. His perfect life, sacrificial death, and triumphant resurrection are the only hope for a life truly free from evil. If we confess these things, we will see this world through to an eternity where evil is dissolved—where the progression of sin and evil will come to an end.