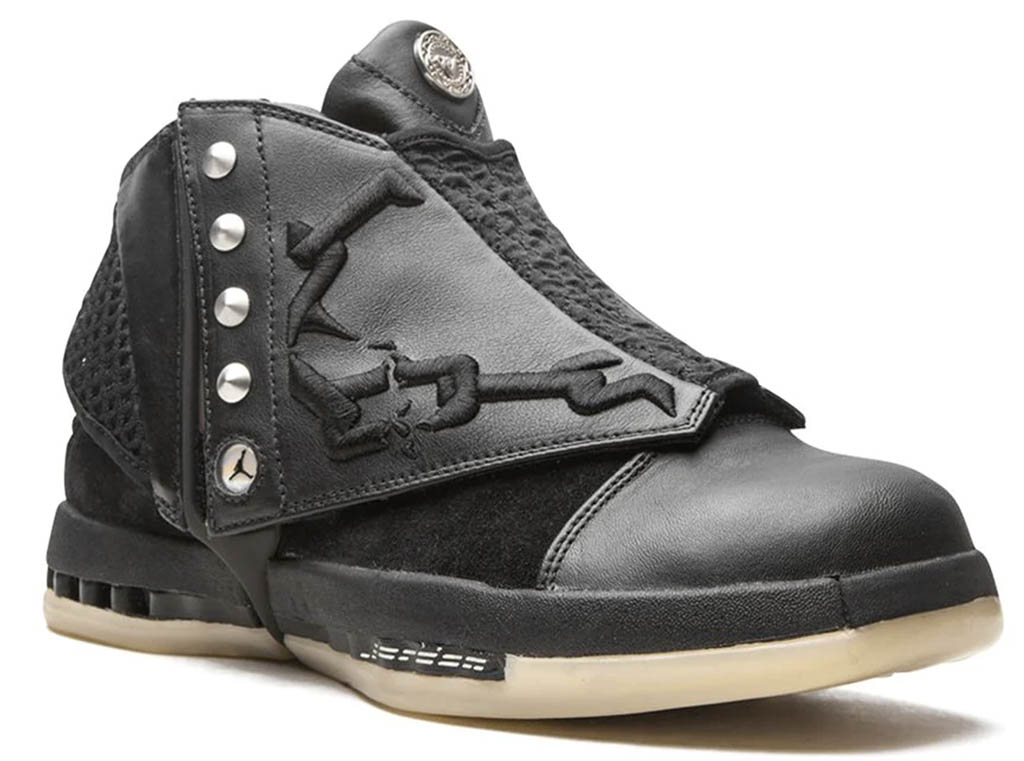 The Air Jordan 15 was the first of NBA icon Michael Jordan’s signature line after fans thought they had seen the baller on the court for the final time. Its unorthodox design and lack of on-court presence from MJ left fans divided.

Legendary designer Tinker Hatfield sat on the throne as lead designer for Jordans since the Air Jordan 3, however, he released the reigns for the 2001 release of the Air Jordan 16 in favor of Wilson Smith III.

With his first crack at creating a piece of the historic lineup, Smith took the Air Jordan 16 down a road not traveled by the signature series prior to its release by strategically hinting at elements from prior Jordan favorites. The three-quarter height was taken from the Air Jordan 3, and a ballistic mesh upper was inspired by the upper of the Air Jordan 5. The Air Jordan 16 also had a clear rubber outsole on it’s original release that was seen on the 5, 6, and 11 of the signature franchise.

The Air Jordan 11 inspiration was further seen as the beloved patent leather was brought back on the toe box of the 16, but the most memorable component was the debut of a shroud. Smith added the removable covering as a representation of Jordan’s transition from the court to a permanent place in the front office. The Air Jordan 16 was intended to give the appearance of a dress shoe complete with shimmering patent leather when the shroud was attached, but it was not all style as a combination of visible blow-molded Air in the heel and Zoom Air in the forefoot provided enough tech for a solid on court performance. Many players preferred to play without the covering which played perfectly into layered storytelling of the shoe’s design.

The Air Jordan 16 was the second release of the Jordan A.C (After Chicago) era, but it originally released in a Chicago Bulls-themed black and red colorway. However, the most celebrated color scheme continues to be “Ginger” that features the eye-catching hue of the same name on the majority of the shoe. It is also the only colorway of the Air Jordan 16 that MJ wore on court during his second return to the NBA, this time suiting up for the Washington Wizards, before switching permanently to the then unreleased Air Jordan 17.

After four colorways and two low models released, talk of the Air Jordan 16 was relatively nonexistent, outside of player editions, until it appeared in retro form as a part of a “Countdown Pack” in 2008. Another seven years passed before we saw MJ’s son, Marcus Jordan, put a twist on the silhouette with tonal French blue Trophy Room x Air Jordan 16. Also that year, a collaboration with Miami-based retailer Solefly created a pair celebration of Art Basel. “Midnight Navy” also returned to shelves in 2016, and the next year another rare Air Jordan 16 dropped when the “Boardroom” commemorated its namesake becoming the first former player to become majority owner of an NBA franchise. Though we’ve seen the admired “Ginger” colorway pop up sporadically on celebrity feet, the last release of the AJ 16 was in 2020 as a part of a Russell Westbrook “Why Not” x Converse pack.

Hopefully, fans of the sleek model will see retros soon.