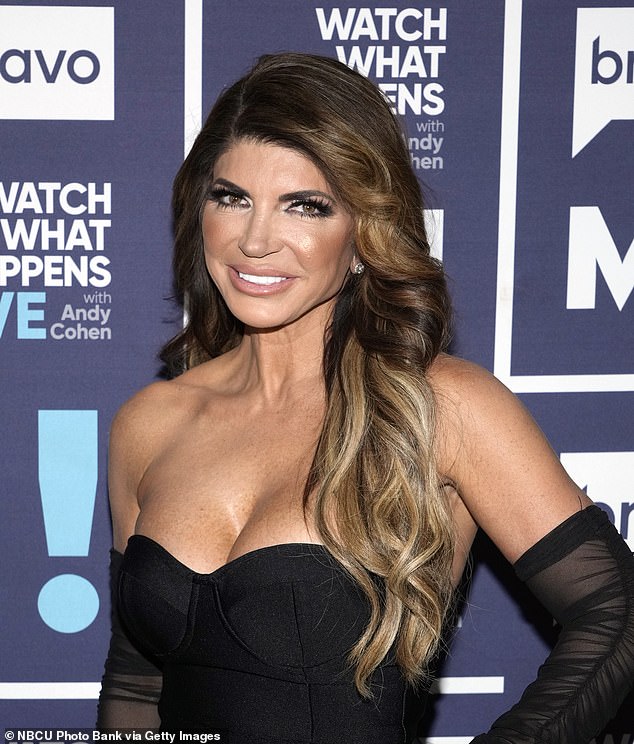 Teresa Giudice has been released from the hospital and is now resting in her New Jersey home following an ’emergency medical procedure,’ according to Page Six.

While the Real Housewives Of New Jersey star didn’t publicly comment on her condition, she did take to her Instagram Stories on Friday and post a video that was shot in her house.

The social media posting comes two days after she was admitted to a local hospital.

Scroll down to video

Health scare: Teresa Giudice, 49, is back home resting on Friday after being discharged from the hospital following an ’emergency medical procedure’; she is seen in January 2022

In the short clip, Teresa is nestled underneath a blue blanket while relaxing on the family’s white couch.

She first points the camera at her oldest daughter Gia, who was laying down dressed in sweatpants and a sweatshirt, to her left, on the spacious couch.

After a few seconds, Teresa then pans the camera phone to the right to show her 16-year-old daughter Milania, who was also laying down, adoringly using her mother’s legs as a pillow.

Dressed in sweatpants and a t-shirt, Milania looked up for a brief second and flashed a big smile for the camera. 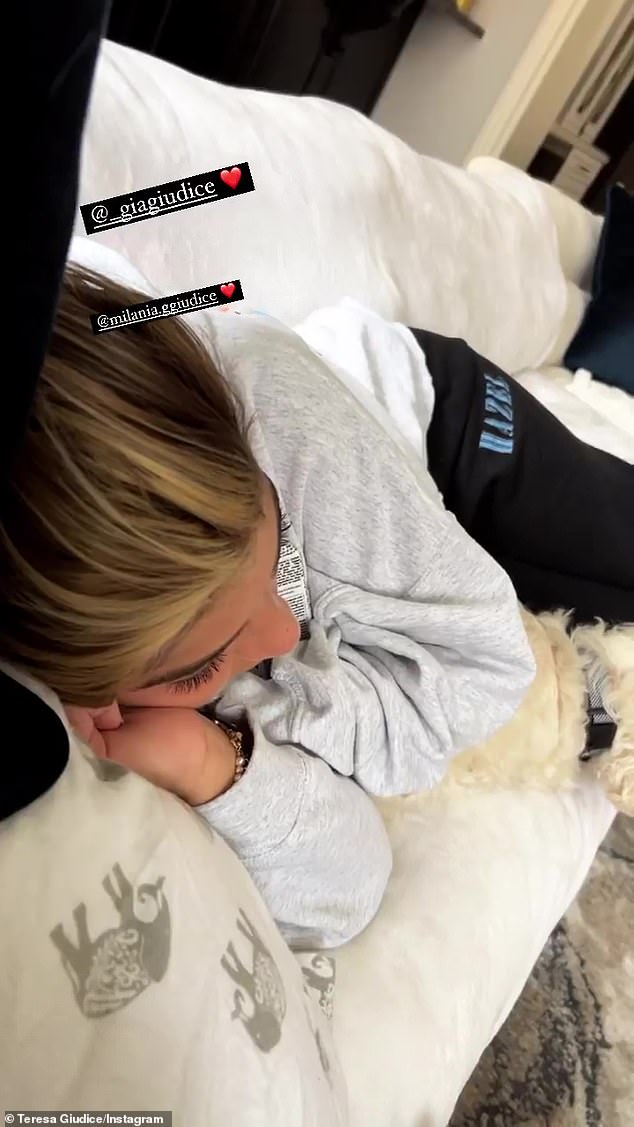 Family alone-time: While the Real Housewives Of New Jersey didn’t publicly comment on her condition, she did take to her Instagram Stories on Friday and post a video which she shot in her house that begins with daughter Gia, 21, laying on a couch 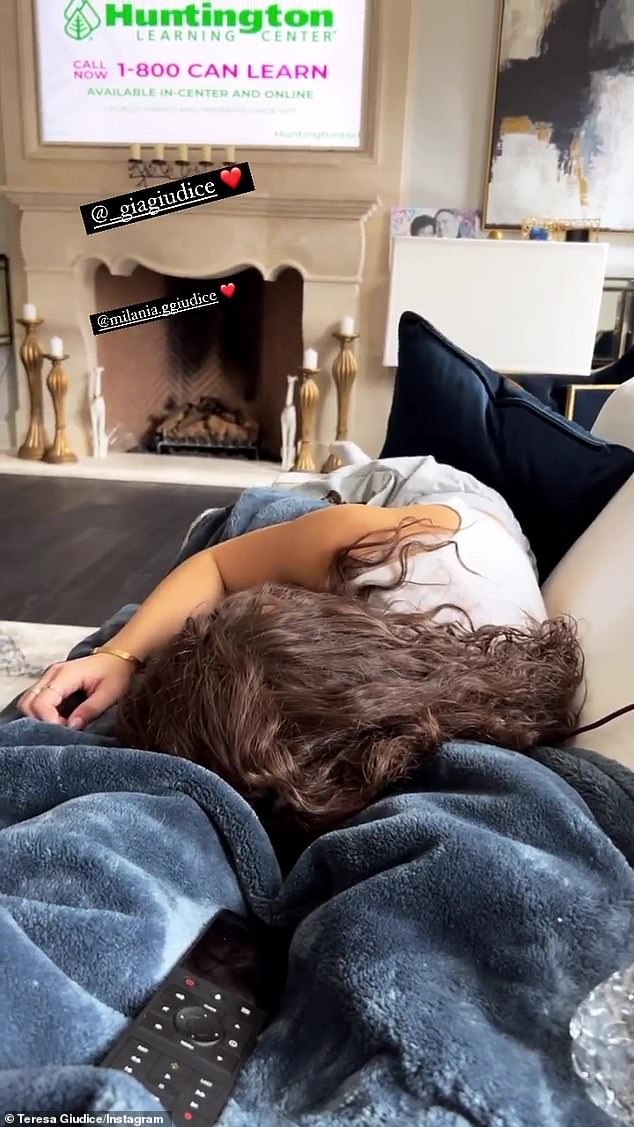 Teresa was laying underneath a blue blanket when she panned her camera over to daughter Milania, 16, who was laying at her mother’s feet

Teresa was admitted to the hospital on Wednesday night and underwent the surgical procedure the following morning.

‘She is in recovery, currently resting, and she thanks everyone for their prayers and well-wishes,’ the reality star’s representative told the publication on Thursday.

The rep went on to confirm that the surgery was ‘non-cosmetic’ and that she was going to be released from the hospital within 24 hours, which is exactly what happened. 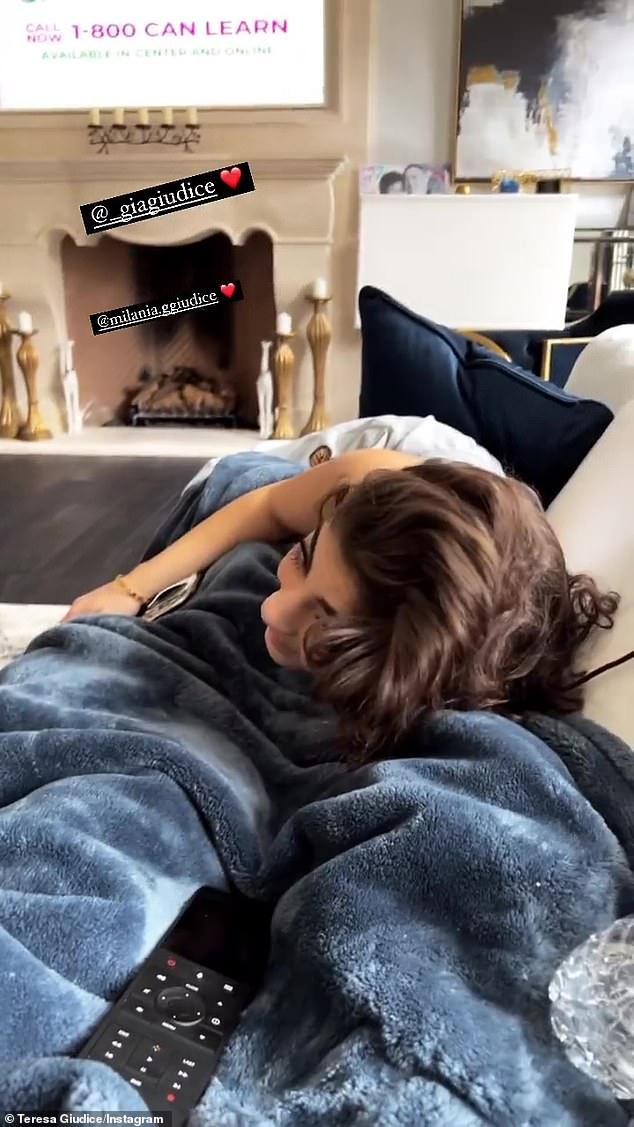 Happy her mom’s home: At one point, Milania looked up for a brief second and flashed a big smile for the camera

Before being discharged, Gia snapped a photo of her mother wearing a face mask while laying in a hospital bed.

‘Such a trooper. I love you,’ Gia captioned the image that she posted on her own Instagram Stories, before adding, ‘Pray for a speedy recovery,’ along with a prayer-hands emoji. ‘I love you @teresagiudice.’

Despite her condition, the reality star looked like her typical self, with a fresh, makeup-free face underneath the disposable blue face mask.

Teresa – whose nickname is Tre – was covered in a white hospital blanket and a white wristband with black writing was visible in the corner of the photo frame. 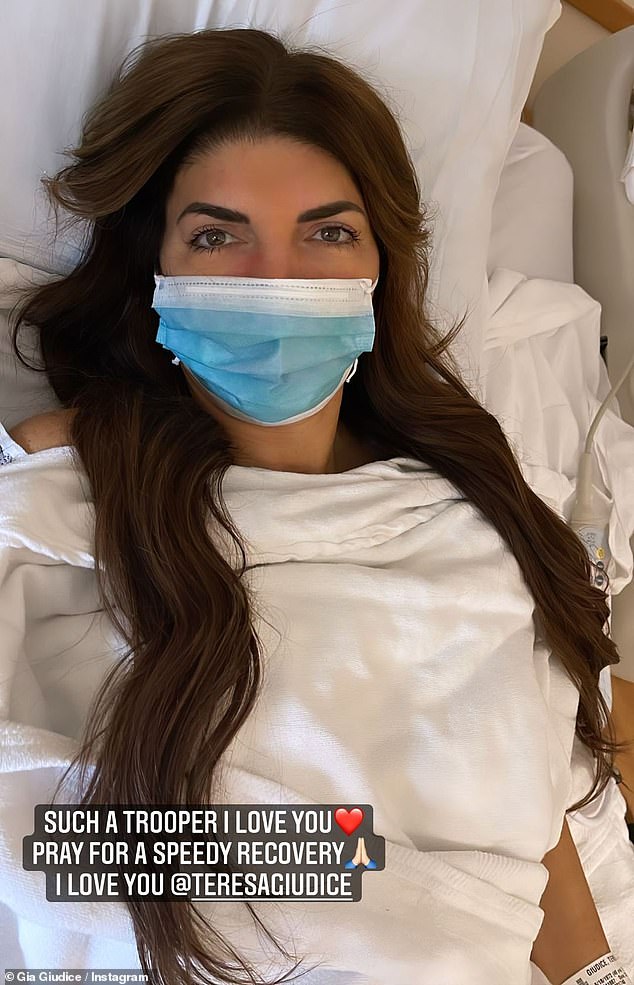 ‘Trooper’: Before being discharged, Gia snapped a photo of her mother wearing a face mask while laying in a hospital bed on Thursday

In addition to Gia and Milania, Teresa is also the proud mother of daughters Gabriella, 17, and Audriana, 12, whom she shares with her ex-husband Joe Giudice.

The former couple were married for more than 20 years when she announced they had separated in December 2019, following rumors of infidelity and their respective prison convictions.

After finalizing their divorce in 2020, Teresa started dating Luis Ruelas, and the new couple have since gotten engaged this past October. 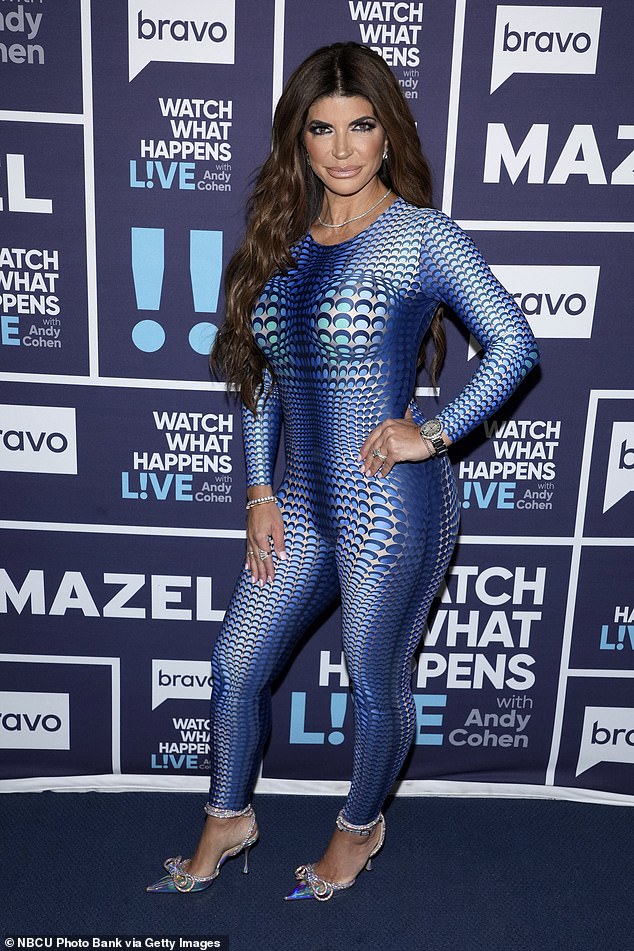 Resting up: The reality star thanks everyone for their prayers and well-wishes,’ a representative for the personality told Page Six 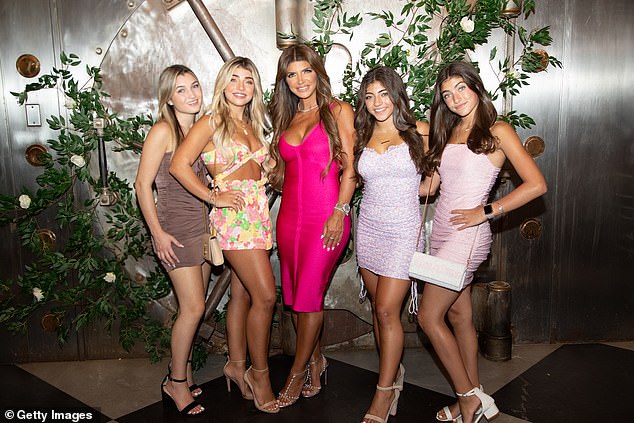 Her girls: The RHONJ shares four daughters – Gia, Gabriella, Milania, and Audriana with her ex-husband Joe Giudice, whom she divorced in 2020

While appearing on Andy Cohen’s late night talk show Watch What Happens Live last week, Teresa revealed that she did not ask her sister-in-law, Melissa Gorga, to stand by her side when she says ‘I do’ later this summer during a big wedding celebration.

When asked ‘How many bridesmaids will you have?’ the longtime Bravo star replied, ‘Eight bridesmaids.’

‘Any of the housewives and your castmates?’ was a follow-up question, which she sternly responded ‘No.’

Upon hearing that she wouldn’t be a bridesmaid Melissa later said she wishes her sister-in-law ‘nothing but happiness.’ 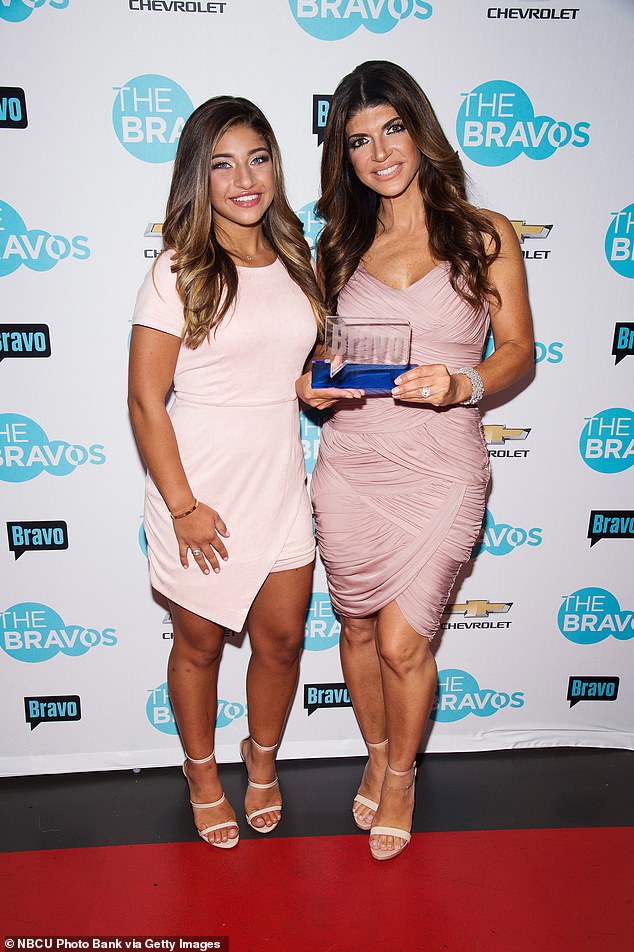 Supportive:Oldest daughter Gia has been sharing updates about her mother on social media