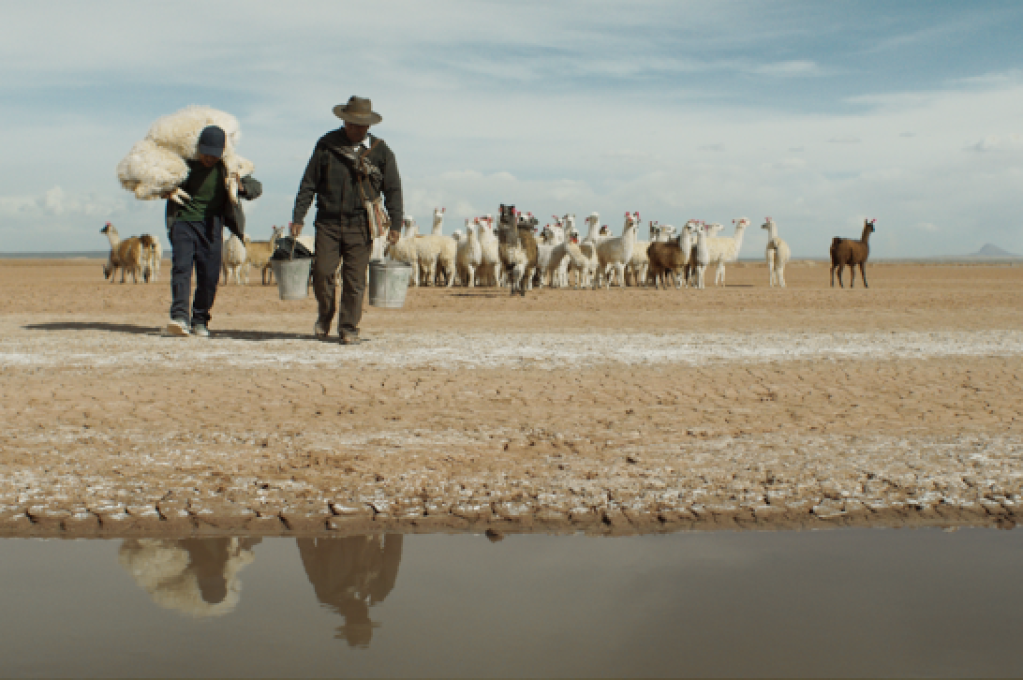 Utama (Our Home) is precisely the sort of discovery that justifies film festivals and makes them useful: a small, hitherto unheard-of work from an out-of-the-way country that grabs you from the opening minutes and afterwards makes you want to tell your friends they’ve got a real treat to look forward to. A rare Bolivian entry in a major festival, this Sundance World Dramatic Competition title and feature debut by Alejandro Loayza Grisi is gorgeously made and brings to life a backwater existence in a distant land with skill and assurance.

“Backwater” should actually be “no water,” as such is the case in a Bolivian high desert more than two miles above sea level where even the wells have gone dry. Young people are nowhere to be seen and the aged couple we meet, weather-beaten Virginio and Sisa, live in a small cabin, speak in a version of the ancient Incan Quechua language, have little to eat and even less to say to each other. Like the local condors, the people here, Aymara migrants from the Altiplano countryside, are going extinct. It’s unlikely you’ve ever seen a film made anywhere near here before.

The leathery Virginio and Sisa (Jose Calcina and Luisa Quispe, both non-pros) are, to be sure, tough old birds, especially the former, who rises at dawn every day and herds a large bunch of llamas (with pink ribbons on their ears) across the barren hills and sands and through the mostly deserted nearby town. It’s hard to tell what either man or beast eats as there’s seemingly nothing to be had.

For the viewer, however, it’s a feast. The director is a still photographer and documentary maker with a great eye, and he’s aided by the talents of cinematographer Barbara Alvarez (Lucrecia Martel’s The Headless Woman). Together, they’ve created a work that, with the help of the endlessly fascinating locations, keeps your eyes riveted.

Virginio’s stubbornness seems resolute but so, unfortunately, are a persistent cough and his very heavy breathing. He insists he’s okay but clearly there’s something wrong, probably very much so, although he’s too proud to admit it. “Time has gotten tired,” a rare local eloquently puts it.

Enter a grandson with the charmingly presumptuous name of Clever (Santos Choque), who has made it his mission to bring the old folks down from the mountain and into the city, where they can see a doctor and be looked after. He predictably finds Grandpa “grumpy as usual.”

Pride prevents Virginio from admitting any illness, but he does pass on a little folk parable about how, when it can’t fly anymore, a condor will go up a mountain, fold back its wings and let itself fall, allowing a new cycle to begin. When Clever suggests the somewhat less drastic human option of seeing a doctor, the old man won’t hear of it.

The way things look, there are truly no viable options in this dried-up land other than to surrender and leave. Instead, at the time of a stunning full moon, Grandpa says, “I need to go to the mountain,” where he finally admits to himself that he’s dying. An extraordinary scene has Virginio keeling over, upon which the llamas stop, inspect the old man by smelling him and then move on. The next morning, however, he insists that he’s now fine.

There’s more to-and-fro among the three main characters as they argue, sort out issues and, after a fashion, come to terms with their fates. Directing with a very sure hand and the confidence of a veteran, Loayza Grisi has fashioned an exceptional debut that reveals a heightened visual sense, strong skills with non-professional actors (the two aging leads were evidently found in a village and had to be talked into participating) and the shrewd good sense to offer up something fresh and new.