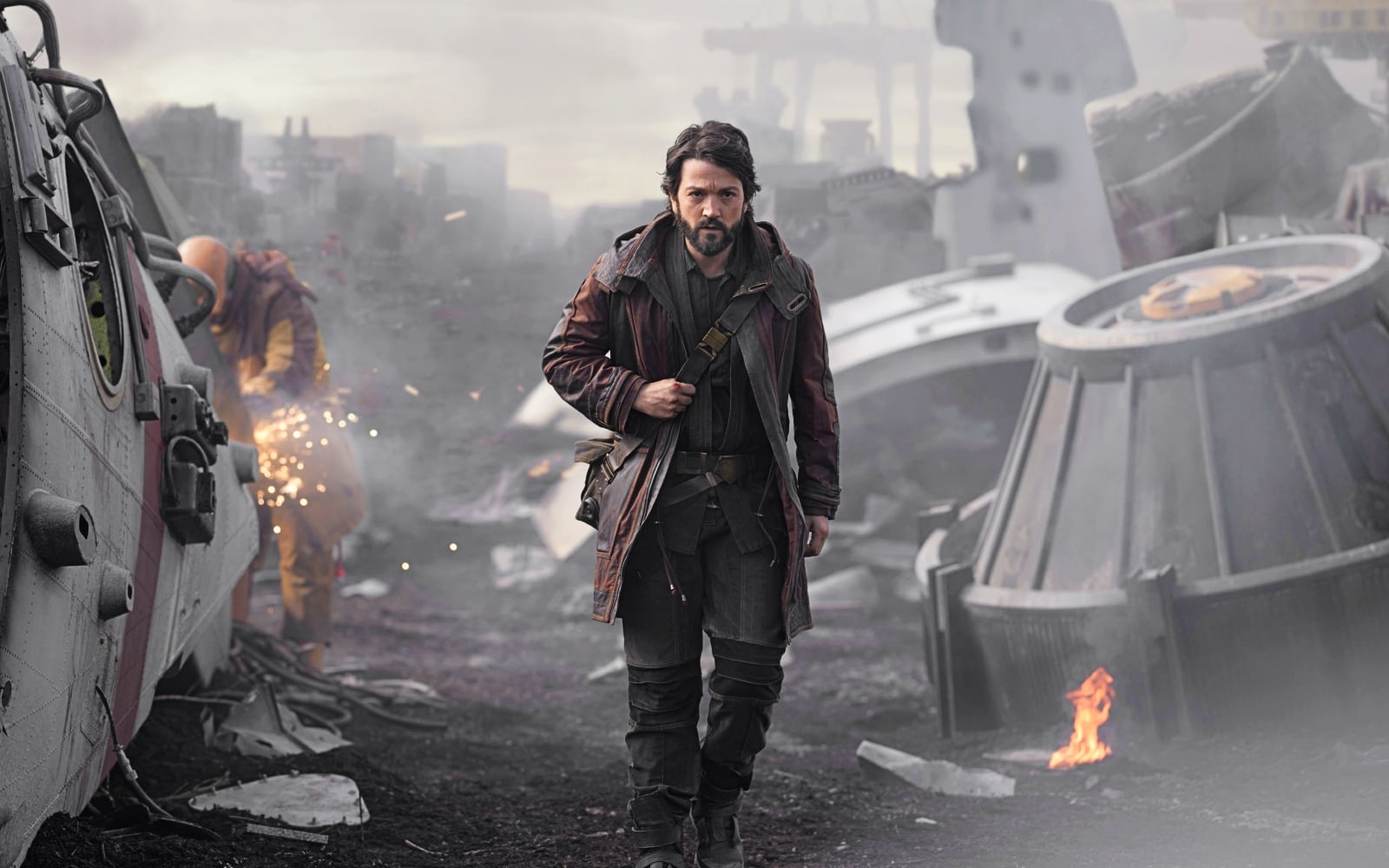 Five years before the events of Rogue One and A New Hope, we’re introduced to Cassian Andor roaming the rain-drenched alleyways of Morlana One’s “Leisure Zone” in search of his sister. Cassian receives a mixed bag of disappointment and relief to learn there is no girl from Kenari working at an off-the-books brothel, but not before drawing the ire of two corpo security guards slouching at the bar under a haze of cheap booze and sexual entitlement. With yet another lead to his sister’s whereabouts at a dead end, Andor leaves empty-handed.

The guards follow close behind. Little can satisfy jealous men drunk on mall cop machismo, so they detain Cassian at gunpoint under the guise of a parking violation, soliciting a bribe. Our title character “surrenders,” offering the last 300 credits in his pocket before subduing the pair, wrestling a blaster away from the one and accidentally killing the other.

The lone guard, on his knees now, hands raised in submission, pleads to his victim-turned-captor. “He fell. We had a misunderstanding,” the man chokes and begs. “We’ll go in together.”

Cassian does the math. An immigrant street urchin in occupied territory, out past curfew patronizing an underground house of ill repute. Two guards: one dead, one witness.

None of us are supposed to be here.

To quote Al Pacino from Heat, “Once it escalated into a murder… what difference does it make? Why leave a living witness?”

My condolences to those of you watching with little kids. We’ve already got sex and murder in the first ten minutes. Something tells me we won’t be seeing Boba Fett riding a rancor or Baby Yoda slurping down a frog lady’s eggs in this show. Andor isn’t your father’s Star Wars, and it’s not your six-year-old’s either.

The scene parallels our introduction to Andor in the first act of Rogue One, in which the Rebel spy kills two stormtroopers before offing his own informant to keep sensitive intelligence out of the Empire’s hands. There, Cassian Andor, the trained assassin—a Rebel with a cause—showed little hesitation in killing for the presumed “greater good.” Yet here we are, five years prior, and Cassian Andor, the scavenger, pulls the trigger for no other mission but survival and self-preservation.

That anyone would assign moral superiority to either murderous act is a distinction with little difference. In Howard Thurman’s Jesus and the Disinherited, the man wrote of marginalized communities, “Not to be killed becomes the great end, and morality takes its meaning from that center.” Mere preaching and moralism bring few comforts to the man and woman who, in Thurman’s words, find themselves “against the wall,” whose lives are “lightly held by the dominant group.”

“Until that center is shifted, nothing real can be accomplished,” Thurman concluded.

In Cassian’s day, the center of daily life is drudging one day to the next, scrapping and scavenging on the planet Ferrix. Andor’s community is a tight-knit blue-collar company town, as men and women keep their heads down and go about their ordinary jobs. They live and work under the jurisdiction of the Pre-Mor Authority. Just as we’ve known the Empire to outsource some jobs to freelancers and bounty hunters, it appears that in this era of the Empire, the security and governance of entire systems have been farmed out to temp agencies and corporations as well.

The killing of two corrupt Pre-Mor Authority corpo grunts attracts the attention of Deputy Inspector Syril Karn, a young and zealous—albeit naïve—company man who takes great offense that not only would someone dare kill two of his fellow suits, but that his superior officer would allow the crime to go unpunished, preferring instead to brush the situation under the rug rather than solicit unwanted questions. They would rather avoid inquiries over corruption and incompetence from the pencil-pushing oversight committee at the Imperial Army Office, his boss tells him.

The main story is interrupted by multiple flashbacks to Cassian’s childhood on Kenari. We learn that Cassian once went by Kassa, living with his sister among a tribe of indigenous children who’d presumably been orphaned by a mining disaster after their world had been stripped bare by the Old Republic.

On Kassi’s last day on Kenari, a ship crashes nearby, killing nearly everyone on board. As the tribe investigates, an armed crewmember shoots and kills one of the children, and in return, is quickly subdued and killed by the tribe. As the group flees, Kassa stays behind to investigate the wreckage. Two scavengers, Maarva Andor and Clem Andor, happen upon the wreckage with Kassa alone inside, and quickly subdue him, reasoning that reinforcements will soon find the wreckage and blame the indigenous child for killing the crewmember. Rather than allow Kassa to fall into enemy hands, the Andors steal him away from Kenari in an act that is half a kidnapping and half an adoption. We now know this is how Kassa obtained his namesake, and we also presume this was the last time Cassian Andor saw his sister alive.

Back on Ferrix, the self-important Deputy Inspector Karn disobeys his chief’s direction and assembles a crew of corpo mercs to find and extract Cassian Andor. With the walls closing in, Cassian solicits help from Bix Caleen, a friend whose side hustle connects wannabe buyers to illicit merchandise on the black market. Bix agrees to broker a meeting with a potential buyer interested in a stolen Imperial starpath unit, the proceeds from which will buy Cassian’s departure to a galaxy far, far away from Ferrix.

Yet the buyer, Luthen Rael, is after more than just merchandise. The man, wealthy by all appearances, and presumably a recruiter of some kind, takes an interest in Cassian himself. How did someone like Andor steal such a valuable, near-mint piece of technology from the Empire?

“You just walk in like you belong,” Andor answers. “They’re so fat and satisfied, they can’t imagine someone like me would ever get inside their house.”

And with that explanation, Luthen knows he found exactly who he’s looking for: a toughened, enterprising, thieving survivor who knows his oppressors have no clothes.

“These days will end, Cassian Andor,” Luthen growls. “The way they laugh. The way they push through a crowd. The sound of that voice telling you to stop, to go, to move. Telling you to die.”

Then comes the old man’s offer: “Don’t you want to fight these bastards for real?”

Cassian flees with Luthen as a spirit of civil disobedience possesses the people of Ferrix with random acts of intimidation and insurrection against the Pre-Mor Authority assailants. In the end, multiple company men lay dead in the streets, leaving the Deputy Inspector to face what will certainly be a fiercely-worded written warning in his permanent human resources file.

With these first three episodes, Andor represents Lucasfilm’s starkest departure from the Disney era’s obsession with constant callbacks and easter eggs to other Star Wars projects. This seems to be a deliberate choice by showrunner Tony Gilroy (that’s right, the Michael Clayton guy) who said in a recent interview, “We didn’t want to do anything that was fan service.”

In short, Andor feels like the first fulfillment of Disney’s decade-long promise to unspool new, original stories set in the Star Wars mythology, through the eyes of characters who’ve never heard the name Skywalker. If the rest of the season continues in this manner, this is not just Lucasfilm’s best Disney+ series to date, but its most original project in a generation.