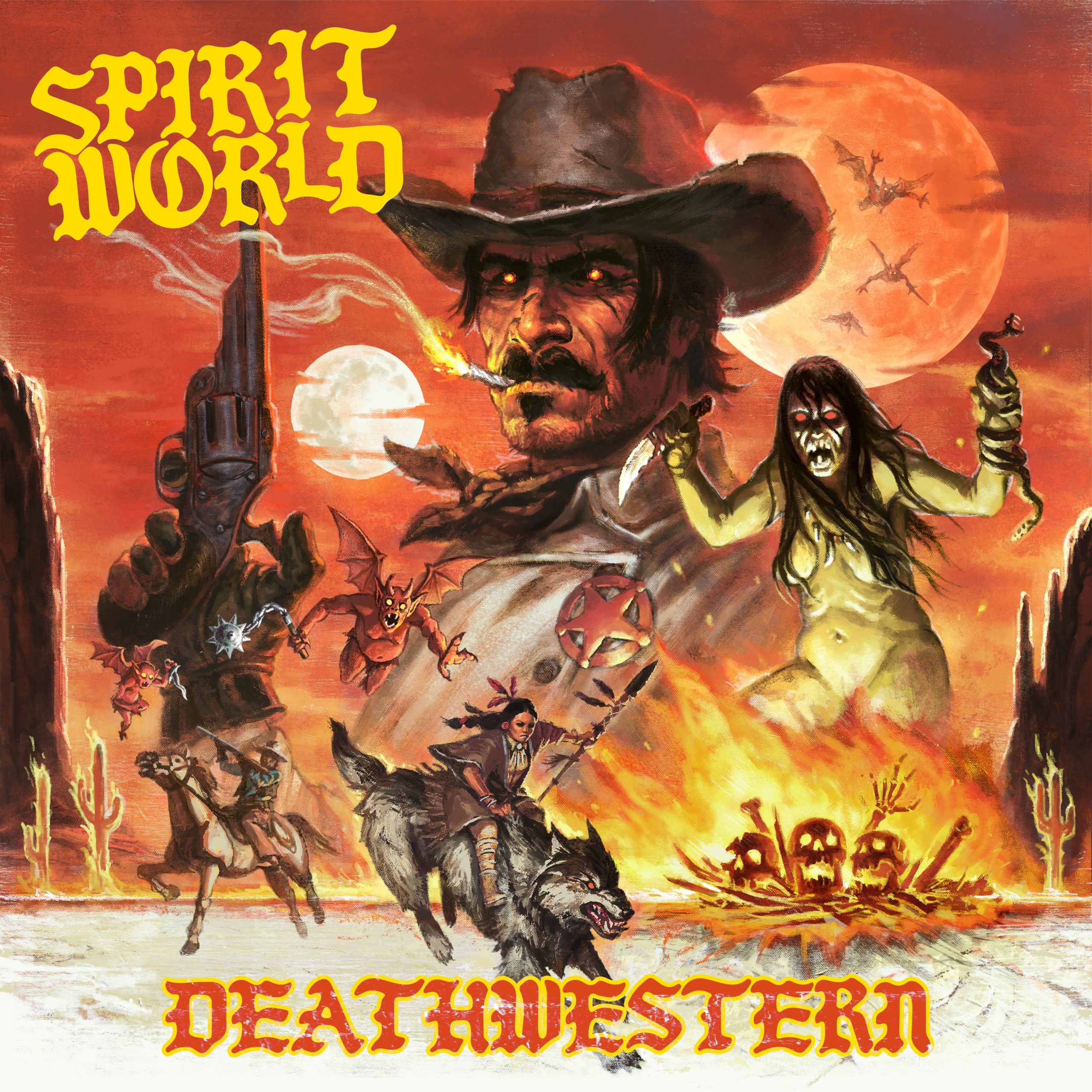 This obscenely fun and fascinating project did not come out of nowhere. It’s more like the grand culmination of a creative vision that has been evolving for years. When Justin “Stu” Brundy started the metalcore act Folsom two decades ago, the band name betrayed his interest in country music. In 2017, Brundy — who was by then going by Stu Folsom — launched SpiritWorld to indulge his love of cowpunk, name-checking X, Dwight Yoakam, and Lucero in interviews and even releasing a song called “Zevon Forever.” (He printed up SpiritWorld hoodies emblazoned with the same phrase.) Those early SpiritWorld recordings were an unusually potent version of the overdone punk-goes-country pivot, matching twangy Telecasters with blunt-force barking to invigorating effect. It was a sound Folsom would soon discard, but it was a necessary transitional phase.

When debut album Pagan Rhythms emerged last year, SpiritWorld had undergone a wild metamorphosis. The Old West roots remained, but the cowpunk thing was over. This was now a full-fledged metal band, punishingly heavy and giddily committed to its storyline about Satan coming to Earth to destroy humanity. (Key title: “Armageddon Honkytonk & Saloon.”) Each track barreled ahead like a Fury Road truck full of burly demonic cowboys kicking up clouds of dust on their way to demolish the next town over. Folsom’s orc-like bellows and rallying cries were vivid in their depiction of a cursed world overrun by hell. It was a holy-shit triumph of a record, both a statement of purpose and proof of concept. And with their second album, SpiritWorld have topped it.

DEATHWESTERN begins, naturally, with Ennio Morricone-style Spaghetti Western scene-setting. One sampled voice asks, “Are you anti-Christ, or are you for Christ? Those are your only options.” Another exclaims, “Well, what are we waiting for? Let’s find a saloon!” With that, we’re whisked away into the pummeling, screaming brutality of the title track. Over chugging riffage Folsom describes as “100% intentional White Zombie worship” — it reminds me more of Pantera thanks to all those pinch harmonics — Folsom howls, “I heard the preacher say/ Our savior died to absolve our sins/ But a wretch like me don’t need a cross, just the end of a rope!” Further character development follows on “Relic Of Damnation,” which toggles between “For Whom The Bell Tolls” homage and relentless rapid-fire chug: “I could have swore I saw the Devil on a sawdust floor/ In a honky tonk in North Texas/ But maybe it was just the booze/ Or maybe all the Mescaline!”

As a writer, Folsom is brilliantly committed to his shtick. As heard on “The Heretic Butcher,” his character sketches are concise and evocative: “I never felt alive/ ‘Til the day I found/ My hands around the throat/ Of a heretic rejecting the light!” But before you can grasp his conceptual genius, what’s bound to grab you first is the music itself. Like so much of the metal they’re channeling here, SpiritWorld are monumentally heavy yet far too agile and dynamic to get stuck in the muck. Just as crucially, Folsom understands how yelling can function as a hook. This is doubly apparent on the quickie deep cut “Crucified Heathen Scum,” which fits in multiple chorus-worthy segments despite running less than two minutes. “His everlasting light shines down on me!” Folsom hollers halfway through, extending the word “light” until you feel it burn. In the end, he lets the word “crucified” hang in the air the same way until his bandmates puncture the tension with a gang-chanted “heathen scum!”

Like Pagan Rhythms before it, DEATHWESTERN is a concept album, with both musical and thematic continuity across its tracklist. Sometimes it feels like the record is not built from individual songs so much as movements within a gory symphony that owes as much to Slayer as Cormac McCarthy. A lot of people had a hand in its creation — longtime producer Sam Pura, whose name finds its way into “Purafied In Violence”; a crew of bandmates including Folsom’s brother Nick Brundy; guest shredding from a cast of guitarists for acts ranging from Black Dahlia Murder to Kim Petras(!); even an appearance by Dwid Hellion of kindred spirits Integrity on a song called “Moonlit Torture & Genital Mutilation”(!!) — yet its strengths and quirks all flow from Folsom’s enraptured expertise. This guy spent something like 20 years seeking the truest manifestation of his passions. He’s found it. With DEATHWESTERN, we now get to step inside Folsom’s mind and behold his singular twisted vision. We just might not leave with all our limbs.

DEATHWESTERN is out 11/25 on Century Media.

Other albums of note out this week: