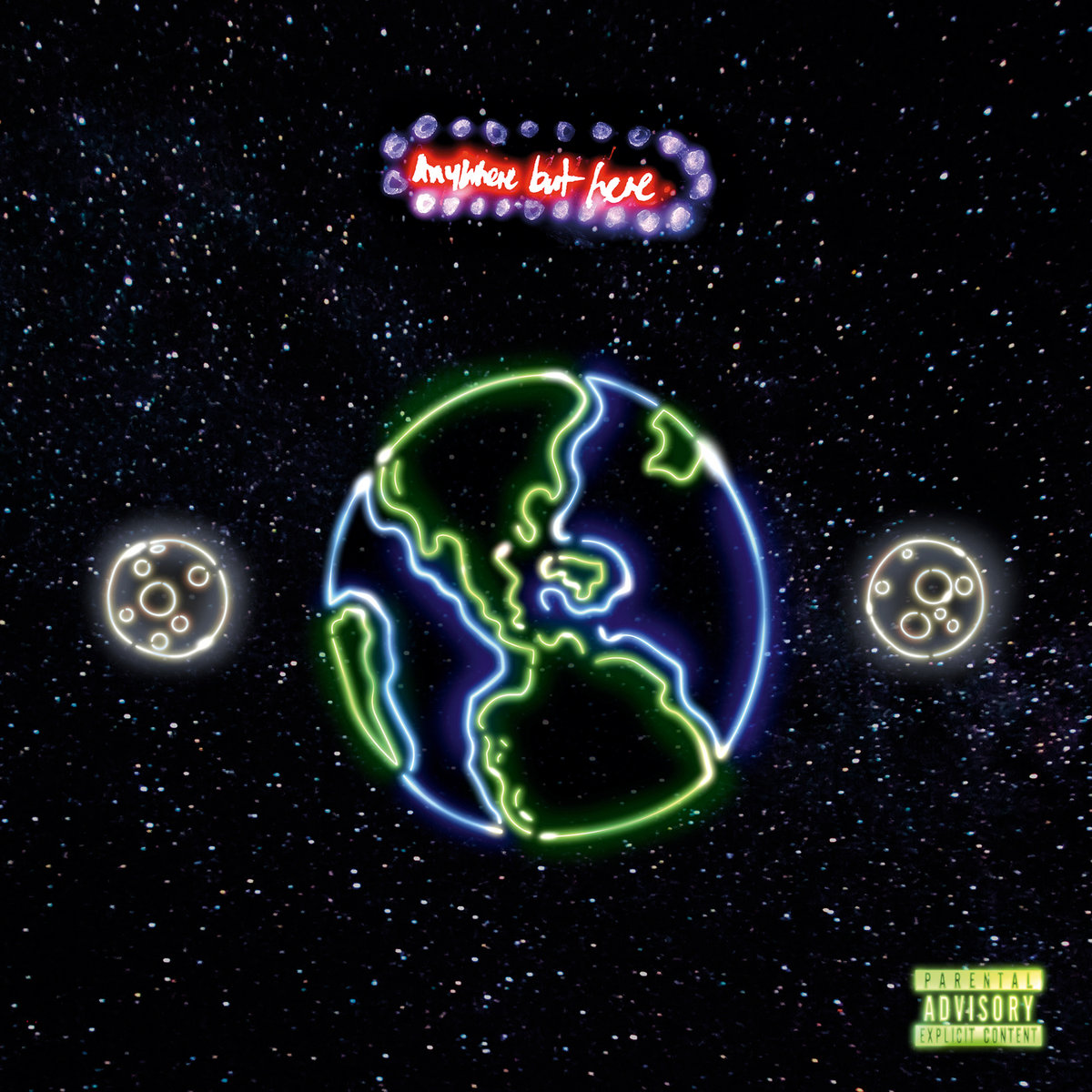 Sadness is around every corner on Anywhere But Here. Sorry’s magnetic and magnificent sophomore album turns the band’s twisted pop-rock gaze onto a singular focus: getting your heart ripped out of your chest. “I just did what everyone else did, I went a little mad,” the band’s Asha Lorenz slyly noted in some press materials about the past couple years. I don’t even want to pretend to know the specifics of what happened, but it’s clear that heartbreak is the name of the game. That manifests itself in songs which toggle between righteous anger, total despondency, and a blind hopefulness that scans more as naïve wishful thinking. There’s not much in the way of levity to be found on Anywhere But Here, but the overwhelming despair is in itself a kind of joke, a purging of emotions that feels as cathartic as it sounds catchy.

The UK band is in fine form throughout Anywhere But Here. Through their early mixtapes and on their debut album 925, Sorry emphasized mood. Their songs bled together, slipping in and out of different genres as they tested out new sounds. Hooks would pop out of nowhere just as quickly as they’d leave, the band would rocket through ideas before they had a chance to finish them. It was exciting to listen to in part because you were never sure exactly where they’d end up next. They are great at crafting environments and leaving behind the wreckage. They continue that pursuit on Anywhere But Here with plenty of fresh flavors — grunge, trip-hop, college radio rock, blistering acoustic ballads — but their songs have become more concrete and fully-formed. Each track is its own self-contained world.

Sorry are spearheaded by childhood friends and dual writing force Asha Lorenz and Louis O’Bryen, but they’ve always been surrounded by an actual band. The central duo recorded Anywhere But Here in the studio with that crew — Lincoln Barrett, Campbell Baum, and Marco Pini — plus producer Adrian Utley, of Portishead fame, who lends sharper focus to the group’s soupy arrangements. The songs are more distinctive than anything Sorry have done before. What ties them together is an impenetrable gloom. But instead of making it an unlistenable slog like one might expect, there’s something alluring and a little addictive about the pure agony expressed on the album. The album is itchy and insistent; it’s theatrical in its way. That pain is all raw, connective tissue.

Every track has moments of wry, unfettered anguish. Like “Key To The City,” a triumphant fuck-you song that also feels absolutely pathetic. It stumbles between a grooving bass and spindly guitars as Lorenz imagines all the things her former lover could be doing right then, then stares down a deep emptiness for even still caring about it. “I know that you’re out there/ Getting fucked in someone else’s bed,” she sings, and you can practically hear her picturing the deed, a mixture of disgust and jealousy. “You said I always look like a deer in the headlights/ I still look lost in this city.” It’s shadowy and harrowing, and Lorenz tries to regain her composure at the end. “If you’re gonna leave, I don’t care,” she insists. “It’s not me, I don’t care, go and have another hot girl affair” — but there’s an unmistakable desperation surrounding it.

After a brief sojourn in the tracklist to the jaunty, carnival-esque “Willow Tree” and “There’s So Many People That Want To Be Loved,” which is forlorn but at least trying, Lorenz is back to dejection on “I Miss The Fool,” a crackling track that breaks out into a dramatic opera sample as she tries to carve out some space where it doesn’t hurt. “I can’t keep you safe/ But I can in this song/ It makes me weep/ As it saunters along,” she sings. “I can’t see your face/ But I can in this song/ I play it on a loop/ ‘Til it won’t play on.” She burrows deeper into that idea on the next track, “Step”: “I built a song for me and you to live in/ I did you wrong ’cause that’s all that I knew how.”

Anywhere But Here mirrors the reality of depression, where every moment feels like it’s going to be the last. O’Bryen joins the pity party often, murmuring in the background and offering commiseration where he can. “There, there it goes, the life I knew so well,” he warbles on the spiky, searing “Tell Me.” “The life that split my heart in two.” They come together on late-album sputter “Screaming In The Rain,” collapsing into each other’s grotesque emotions: “I feel too alien/ Nothing’s making sense/ I’m screaming in the rain again.” But Lorenz really takes the lead on this album, reveling in all the negativity that she can. It’s really a testament to the strength of the band’s songwriting that they can manage to find this many intriguing ways to mull over the same heartbreak, and do so in a way that makes you want to listen again and again.

There is one shining moment on Anywhere But Here, though, and it comes at the very beginning of the album. “Let The Lights On” is the feeling that comes after all the heartbreak, and it’s certainly a deliberate choice to put it at the start. The song is about leaving all this hurt behind in the strobing lights of the club, and it’s made more powerful knowing that it’s the result at the end of a long journey. “I love you, I wanna tell you I love you ’cause I love you,” Lorenz beams. “I need you, I wanna tell you I need you, I need you.” The song builds to the ecstatic chorus: “Got a light, don’t let it go out if you…,” and there’s a whole lot contained in that ellipsis that only makes sense when you hear the songs that come after. Or rather, what happened before. The genius of Anywhere But Here lies in how those emotions can be jumbled up, become something you’re moving past and moving through all at once.

Anywhere But Here is out 10/7 via Domino. Pre-order it here.