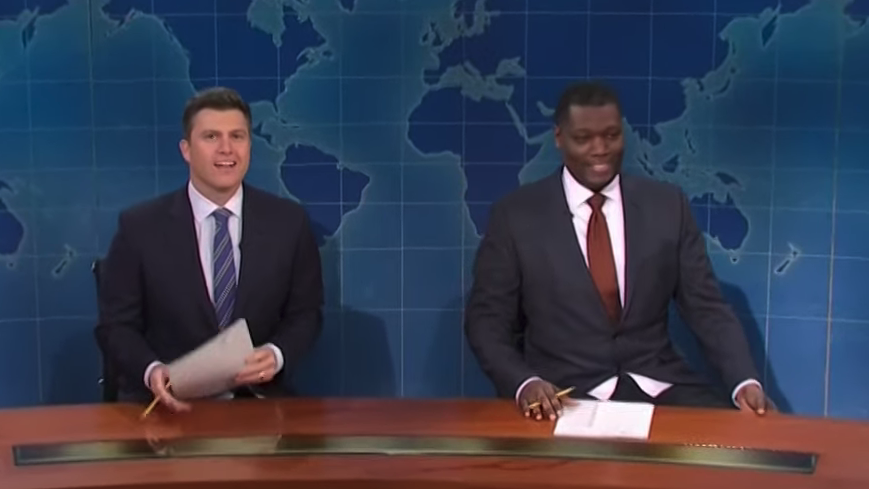 On tonight’s episode of Saturday Night Live, Weekend Update took shots at a wide range of targets, from Jon Voight, Dwayne Johnson and the new Lord of the Rings series to Update‘s own Colin Jost and SNL cast member Pete Davidson.

Anchor Michael Che noted that Voight recently released a video claiming that Abraham Lincoln’s spirit was guiding Donald Trump. “Hopefully,” he said, “not to a theater.”

Jost then aimed at Johnson, who said the skull of a T-rex seen behind him in a recent interview was a replica, rather than the real thing. “Johnson also said it’s just a coincidence that his diet calls for 1000 pounds of dinosaur meat a day,” he said.

Jost would later address the fact that Amazon has unveiled a title for its new Lord of the Rings series—that of course being Rings of Power. “I’m personally more excited,” he said, “for the spinoff, Gollum in Paris.”

Before long, the anchor would become the butt of the joke himself, when conversation turned toward his and Davidson’s recent purchase of a Staten Island ferry boat, which they’re looking to turn into an entertainment venue. The bit in which Davidson also featured came about after Jost invited Alex Moffat’s popular character “Guy Who Just Bought a Boat” to sit down for conversation on the NFL playoffs.

After making his way through his usual string of innuendos, Moffat’s character introduced Davidson to the desk as “Guy Who Just Bought A Ferry.”

“We’re boat people now, Colin,” said Davidson. “I mean, you always were. You look like you own the yacht they rent out for rap videos.”

Also stopping by the Update desk was cast member Sarah Sherman, who said she would be discussing staying cozy in winter weather before hurling anti-Jost headlines at the anchor, including “Wealth-Hoarding Hollywood Husband Colin Jost-Hansson Has Not A Dime To Spare…For St. Jude Hospital” and “Local Sex Bigot Rejects Queer Love.”

The third and final guest panelist of the night was Chinese Trade Minister Chen Biao (Bowen Yang), who appeared to discuss NBC’s decision not to send correspondents to the upcoming Olympic Games in Beijing.

“NBC is announcing the games from their studios in Connecticut,” said Biao. “You know what else films in Connecticut? Maury. Good luck commentating over cries of, ‘You are not the father!’”

Update‘s “Guys Who Bought a Boat” bit can be found above. The remaining clips from tonight’s edition can be found below.