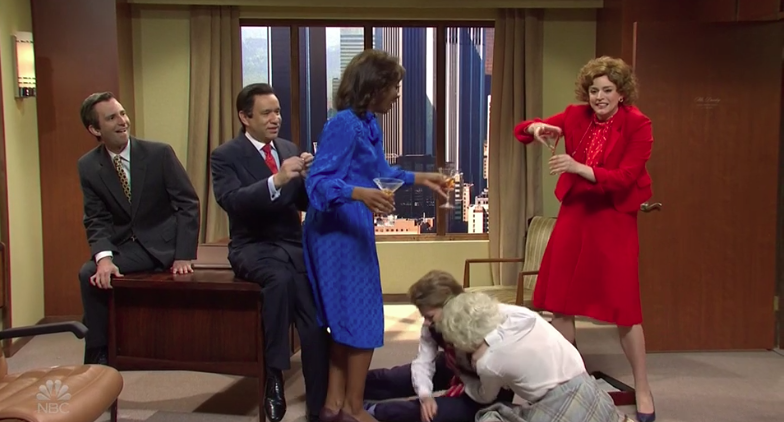 Saturday Night Live combined 9 to 5 with Weekend at Bernie’s for one of Kyle Mooney’s final sketches.

Set as a spinoff to the beloved Jane Fonda, Lily Tomlin and Dolly Parton classic, SNL‘s 9:15 to 5:10 followed what would have happened if three disgruntled women employees – played by Cecily Strong, Ego Nwodim and Heidi Gardner – actually killed their boss, played by first-time host Natasha Lyonne. After Gardner’s character, styled like Parton in the 1980 film, shoots the boss on sight, she and her accomplices decide to puppeteer the dead body for a shareholders meeting. Of course, they know that they’re dealing with a dead body after it fails to respond to their repeated tickling. Lyonne, on the other hand, hesitantly cracks a smile.

The shareholders, played by Mooney and SNL alum Fred Armisen, enter the room only to be met with a lifeless boss supported by his three employees.

“Behind a great man are three women moving his arms,”  the women say.

Things get hairy when the shareholders start asking the boss to respond to various questions and request that he make them drinks. Still trying to cover up their characters’ secret murder, Strong, Nwodim and Gardner haul Lyonne over to a cocktail station and things get messy. While attempting to serve the drinks to Mooney and Armisen, the women crack and collapse in laughter, spilling a Mai Tai in the process.

Amrisen’s shareholder notices something’s off and decides to investigate whether Lyonne’s character is really dead – by tickling the corpse, of course. Lyonne flashes a smile again when tickled. Armisen and Mooney, once they confirm the murder, attempt to storm out but instead walk out a stories-high window instead of a door.

While Mooney’s second to last segment ends in his character’s death, the final sketch of his SNL tenure sees another character in a relatively happier situation.

All women donning the Grey Adult Pigtails shared how their lives have been different since taking on the new laid-back aesthetic. Chiming in is Lyonne’s character, who has found herself a new boyfriend, Mooney’s Richard. Turns out he’s also rocking the pigtails – one ponytail on his beard and another one for his hair.

However, things aren’t all as they seems when Bryant and McKinnon’s characters reveal that they’re also in a relationship with Richard.

“Yeah, we’re all dating Richard,” Bryant says. “He’s like if a guy was magic.”

“What can I say? Can’t ride a bike with no handlebars,” Mooney says.

Also part of the Grey Adult Pigtail crew is Michelle Zauner, frontwoman of the night’s musical guest Japanese Breakfast. Laying some grey pigtails over her space buns, Zauner appears to show off an “extremely sharp metal guitar” and bring the final sketch of the season to a close.

Mooney joined Saturday Night Live in 2013. He will exit the long-running sketch series with Bryant, McKinnon and Pete Davidson.

Watch the sketches below.