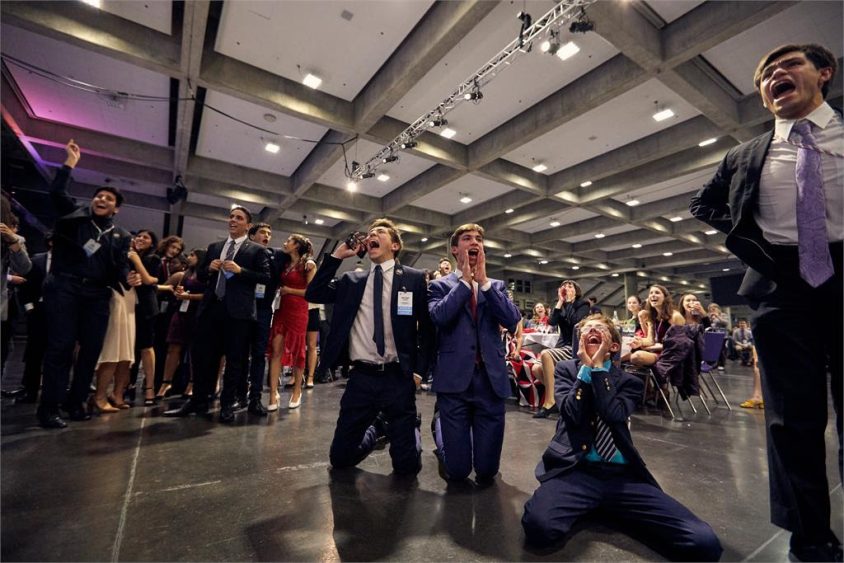 American democracy faces multiple threats – not from external forces as during the Cold War, but from within. A former president unwilling to acknowledge his defeat at the polls, conspiracy theories (unsupported by evidence) about a “stolen” election. Voter suppression. Minority rule.

Amid all these worrisome signs, there is a spark of hope – America’s young people. A lot of them are deeply invested in our democratic form of government, to judge from the new documentary The Youth Governor. The film directed by brothers Jaron and Matthew Halmy shows California teenagers getting first-hand experience in electoral politics, not to mention the legislative process and the judicial system. These Golden State high schoolers take part in the annual Youth and Government simulation capped by the election of a “youth governor.” But the program, supported by YMCAs, is by no means limited to California.

“It’s in 42 states,” Matthew Halmy noted at a Q&A that followed a showing of the film at the Laemmle Monica in Santa Monica last week. “There’s probably 60,000 kids right now who are in Youth and Government.”

The film, released by Greenwich Entertainment, follows a half dozen candidates who ran for Youth Governor in California in a campaign that stretched across several months. The contenders – a group that included two young women and several young people of color – were bursting with intelligence, energy and a good measure of idealism.

“Youth and Government just gives me hope that we can actually be the generation to get things done,” candidate Piper Samuels enthuses in the film, “and make a big stomp on the political world.”

Each candidate represented a fictitious political party – for instance, the Gold, Trout, and Redwood parties – and gathered a campaign staff around themselves.

“We… felt it was important to tell a story about campaigning for office as opposed to politics at large,” Jaron Halmy explained. “I think, hopefully, we did a decent job of focusing on why does somebody want to do this? Why would somebody step up and say, ‘I’m going to run for office’? …It takes a lot more than just willpower.” He added that the final six contenders to emerge displayed a “unique mix of ambition and shamelessness and having a voice.”

“I picked Bayo out [early on], Matthew noted. “The moment I saw him, I was like, this kid is going to make it. I thought he was going to go all the way.”

Appearing at a Q&A on Saturday, Collins reflected on the time he shared in the spotlight with other gubernatorial candidates.

“We became very popular people — we were like celebrities in this controlled environment,” Collins recalled. “I always used to tell people [about it], and they used to be like, ‘Oh, this guy, his head is too big.’ I’m like, ‘Nah.’ …It’s like going in the elevator, getting bum-rushed, signing autographs, all this stuff. Seriously. It was crazy.”

But there were bruising experiences too. Samuels became the target of an anti-Semitic campaign that spread on Jodel, a micro social media platform used by young people within the sphere of Youth and Government events. And Collins’ candidacy was humming along when suddenly a video he had made for a completely unrelated extracurricular program began to circulate on Jodel. It endorsed a controversial policy position advocated by then-Secretary of Education Betsy DeVos, a highly divisive figure — as Collins later realized.

“I learned politics is a dirty game, I will admit,” Collins said at the Q&A. “I was like, if high school is like this, I just know that the real world [of politics] is crazy.”

In addition to a limited theatrical release, The Youth Governor is available now on iTunes and Amazon Prime, and it becomes available Friday through Laemmle Virtual Cinema. The Halmy Brothers came to the project with a great deal of experience in California’s Youth and Government program.

“Matt and I were both in the [Y&G] program as kids… As a teenager it’s really empowering, really exciting,” Jaron noted. “We volunteered as advisors when we got out [of high school].”

The brothers had wanted to make a documentary about Y&G for over a decade, but struggled with how to shape a narrative about such a broad program, which encompasses model versions of all three branches of government.

“It seems obvious that the youth governor [race] is the story to follow, but it took us 10 years to realize [that]… We could have told a story, imagine this, of a candidate for governor and a committee chair and a delegation president and someone else,” Matthew commented. “We could have told some tiered story of five different experiences, but we chose to tell this story because it really is the through-thread of the Youth and Government experience.”

The film unfolds something like a political thriller, shot in vérité style, as the candidates canvas for votes. The six finalists were culled to three. Then the program moved from Fresno and other cities to the actual State Capitol building in Sacramento, where the final three became two… and then one — the winner of Youth Governor. No recount demanded. No allegations of voter fraud. No refusal to concede.

Candidate Samuels represented the Trout Party, which was a good deal more conservative than her personal politics. She said the process of running for governor helped her learn to respect those with differing political opinions. And she said she discovered the importance of tuning out trolls – the kind who tried to circulate the anti-Semitic smear campaign against her (a sting operation run by Trout Party members exposed the neo-Nazi cell and the young people responsible for the offensive comments were removed from the Y&G program).

“The biggest thing I learned was being the bigger person is always the right thing to do, which can be really difficult when the people you’re dealing with are literally actively doing anti-Semitism, hateful, horrible things against you as a person,” Samuels said. “It’s so easy to get really angry and to start calling names, [but] then you’re only stripped down to their level… If we can dedicate more of our time to just moving on and keeping focused on what’s actually important and not letting trolls take up too much space in society, we would get a lot farther.”

“I would say the biggest thing I learned,” Collins said, “was that you don’t have to be in politics to make change.” But he added, “You have to be civically engaged. You have to know who’s making decisions that affect your life and stuff like that. I know when I was coming in [to Y&G], I didn’t really have a good understanding of how bills were passed or how things worked. I feel like [the program] just makes you more well-rounded and prepares you for adulthood.”

Collins, Samuels and their fellow gubernatorial candidate Tate Oein currently attend the University of California – Berkeley and say that, as of now, they don’t plan to pursue political careers. But it appears beyond doubt that the time participants spend in the program strengthens the foundation of American democracy.

“I think the statistic is that 99% of the [Youth and Government] delegates become registered to vote,” Matthew said. “That’s the metric. That’s the success right there. And then also that they’ve learned the hard work of self-government, the detailed work.”