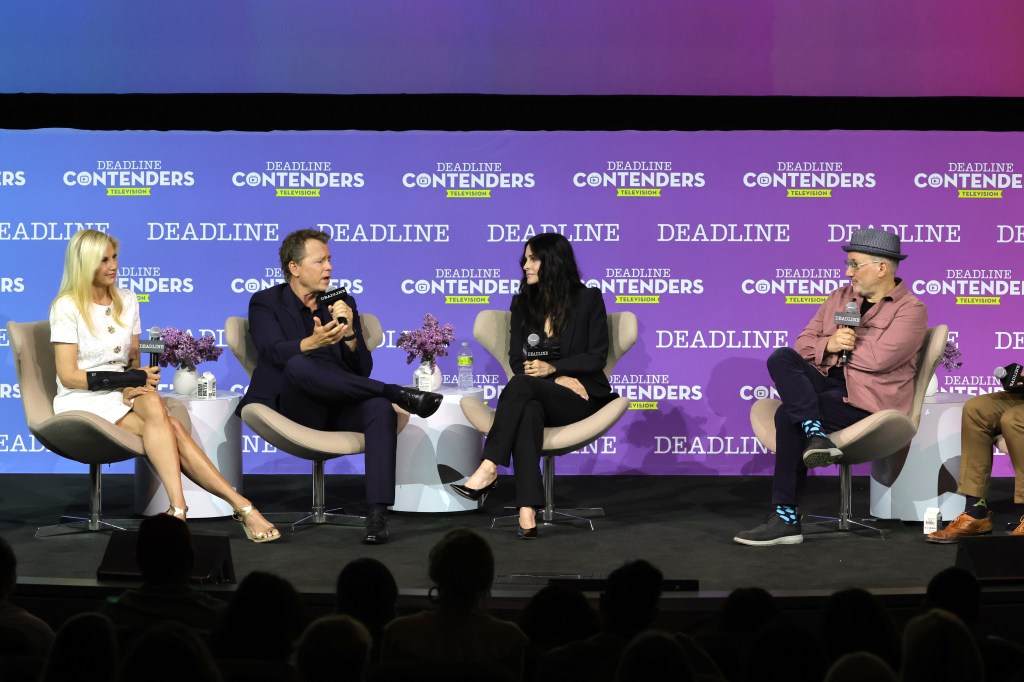 Shining Vale co-creator Jeff Astrof said he was looking to squeeze comedy out of the horror genre when he joined stars Courteney Cox, Greg Kinnear and Mira Sorvino for a panel about the Starz series at Deadline’s Contenders TV event Sunday at the Paramount Theatre.

“I wanted to do something genre-bending,” Astrof said. “And then Aaron Kaplan said, ‘Sharon Horgan wants to do The Shining, but as a comedy,’ and I was like, ‘That’s incredible.’ “

The resulting horror comedy series centers on a dysfunctional family moving to a small town where terrible atrocities have taken place. Pat (Cox) is a writer who gets caught cheating on her husband Terry (Kinnear). In an attempt to save their marriage, they relocate from the big city, but Pat soon begins to suspect there is something very wrong with their new home.

“We all spent quite a bit of time together and I had a great sense that we had a family dynamic from the get-go,” Kinnear said. “There’s a lot of crazy sh*t that happens in this show, but if you can first and foremost buy that this family is real and that they are really going through all the things that are happening here, it makes the ride a hell of a lot better.”

“I was so happy to be able to have a teenage daughter, because I have one,” Cox said, “and I immediately connected with Gus [Birney] in every way, and the way she talks to me in the show is the way I get talked to at home.”

“I’m trying to woo Patricia, Courteney’s character, into kind of playing with me,” Sorvino said, “and letting me entice her to be a little bit wilder. And then ultimately to let me sort of drive the car, her as a person but I’m sort of driving the car, and then we start understanding that my impulses may be a little bit less than innocent.”

The eighth and final episode of the first season premieres on April 17 on Starz.