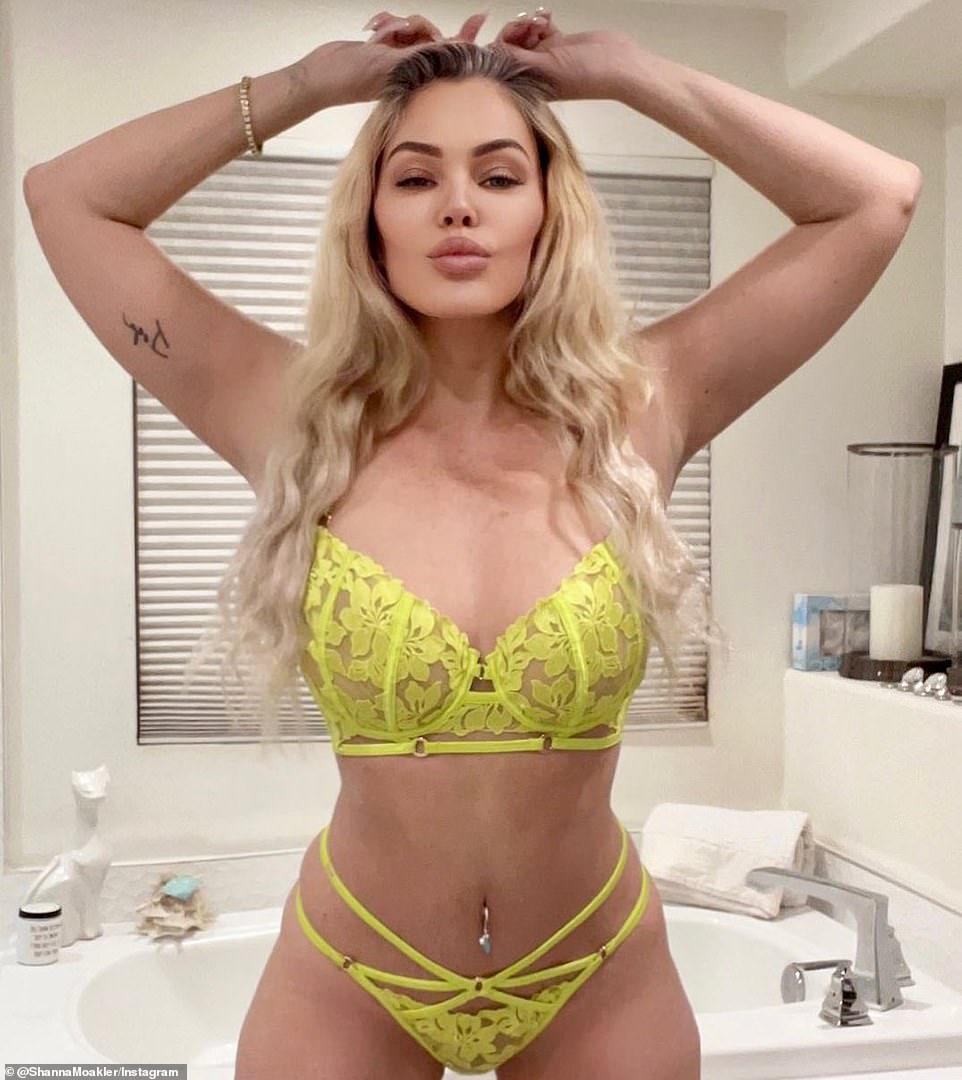 Playboy pinup Shanna Moakler had some happy body news to share with her Instagram followers on Monday.

The ex-wife of Blink 182 drummer Travis Barker – who is now wed to 43-year-old reality TV star Kourtney Kardashian – shared that she has lost 20lbs on her new fitness plan.

And the mother of two added that she has 10lbs more to go before she is in her top shape. ‘Down 20! 10 more to go to hit my fitness goal!’ wrote the cover girl as she was photographed in a bathroom.

She is tiny! Playboy pinup Shanna Moakler had some happy body news to share with her Instagram followers on Monday. The ex-wife of Blink 182 drummer Travis Barker – who is now wed to 43-year-old reality TV star Kourtney Kardashian – shared that she has lost 20lbs on her new fitness plan

‘Ty @davidallennutrition for helping me feel my best! ❤️⚓️ this set is from @brasnthings I’m obsessed with their lingerie!’ she added as she showed off a silver pendant in her belly ring.

‘When I was put on the hormone testosterone, it made me gain 40 pounds,’ she said.

Last month she looked just as amazing as she shared a sizzling image to her Instagram account.

The former Joey actress and Dancing With The Stars contestant was seen in a royal blue semi-sheer corset as she wore her honey blonde hair down over her bare shoulders. 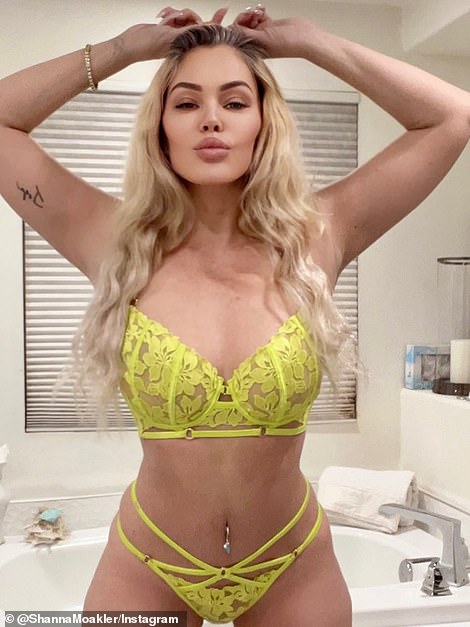 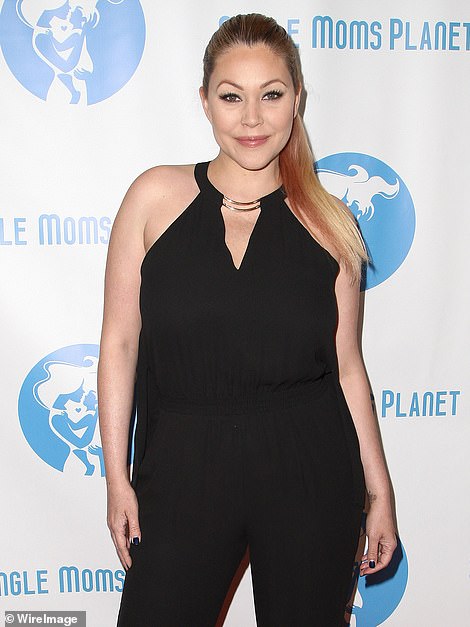 Suddenly slim star: On the left she is see this week and on the right she is pictured in 2016 in Beverly Hills with a fuller frame 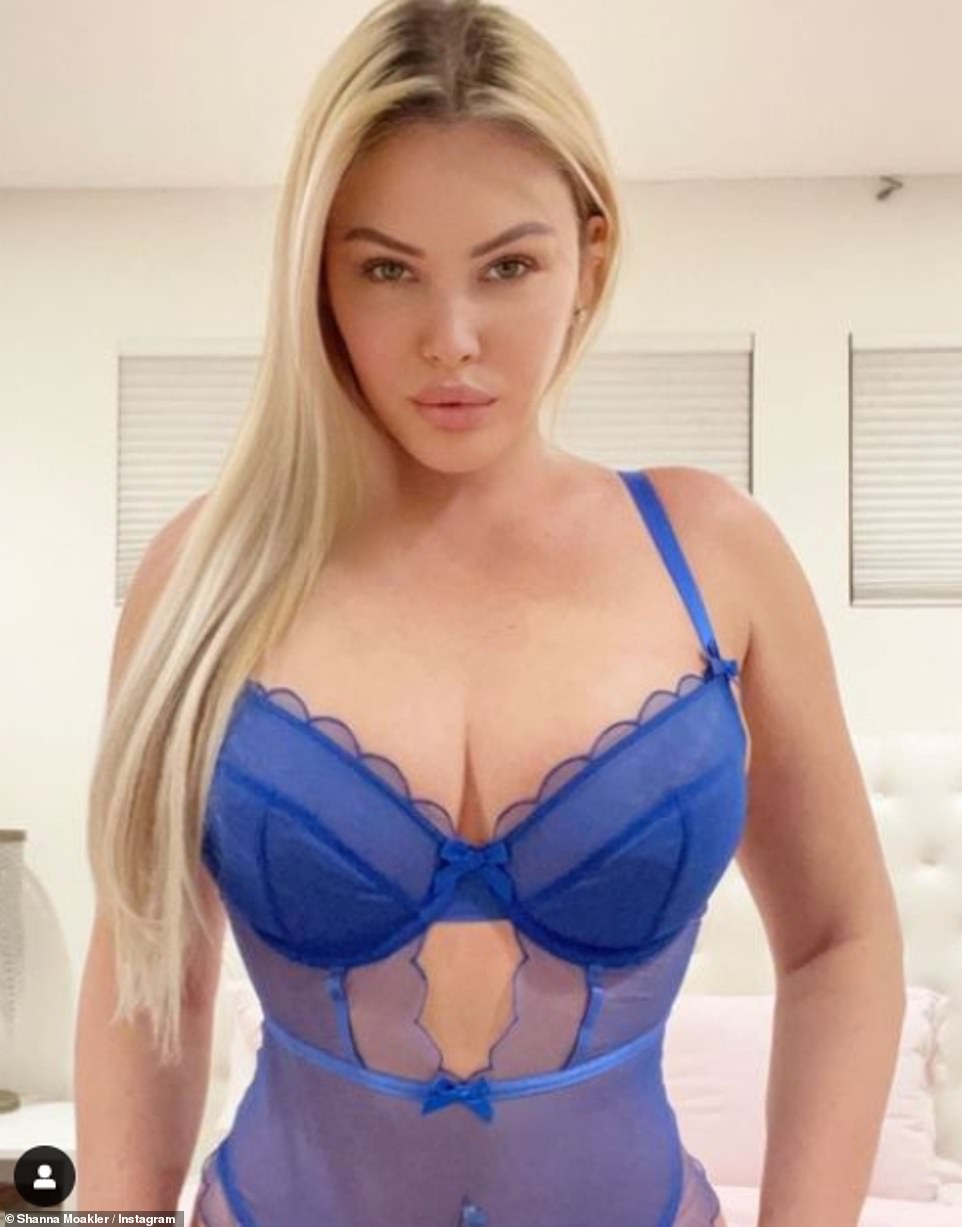 Still a 10: Playboy pinup Shanna Moakler shared a sizzling image to her Instagram account on Wednesday evening. The 47-year-old former Joey actress and Dancing With The Stars contestant was seen in a royal blue corset as she wore her honey blonde hair

The pinup has a background in steamy photo shoots as she has modeled for Playboy, starting in December 2001 when she was named Playmate Of The Month.

Before that she did the beauty pageant contests. She was the winner of the Miss New York USA pageant in 1995 and was the first runner-up at Miss USA 1995. 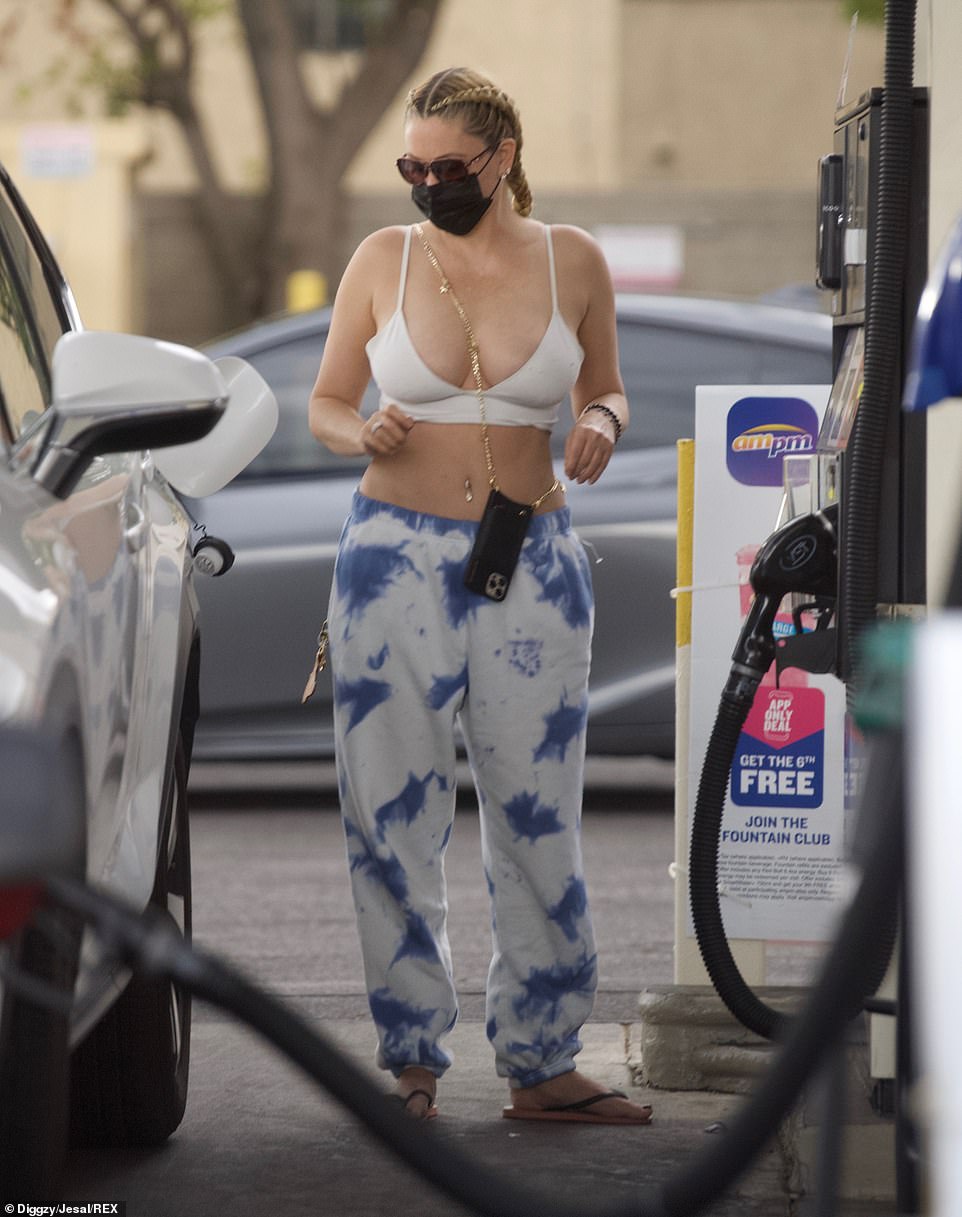 More to love: In 2021, Moakler wore a bra top with tie-dye slacks and flip flops to a gas station in Los Angeles

A different life: On the left she is seen in skintight jeans and boots in 2017, and on the right she added platform heels for some extra height

Meanwhile, in March, Kourtney claimed that her attempts to conceive a baby via IVF ‘put her into menopause’, while also causing weight gain that saw her flooded with ‘rude’ comments from social media users pointing out her changing body shape.

The mother-of-three opened up about her fertility treatment struggles for her family’s Hulu reality series The Kardashians.

The menopause is a natural part of ageing that usually occurs between 45 and 55 years of age, as a woman’s oestrogen levels decline. Research on whether in vitro fertilization (IVF) treatment can trigger menopause is sparse and not yet cemented.

On the show a downcast Kourtney is seen opening up to her mother Kris Jenner about her ongoing attempts to have another baby with Barker. 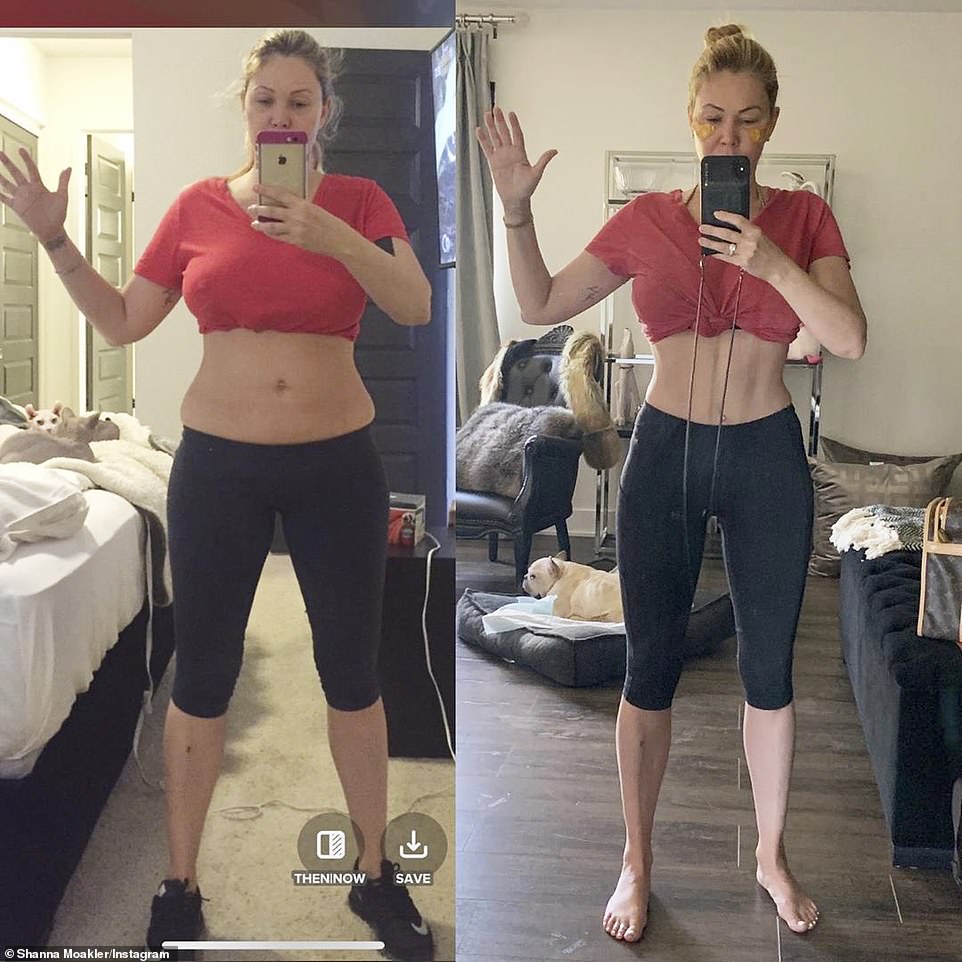 She has been documenting her weight highs and lows for years: Here she is seen rounder and smaller in the exact same outfit in a post from last year

‘Travis and I want to have a baby,’ she says in voiceover while footage of the Blink-182 drummer proposing on the beach is shown.

Speaking about her IVF treatment, the Poosh founder said it had ‘not been the most amazing experience’ after conceiving three children naturally.

The reality star is mother to Mason; Penelope; and Reign — with her former partner Scott Disick, whom she dated from 2005 until 2015.

Kourtney also shared her upset over the ‘rude’ comments she has recently received about her weight gain, which she says was also triggered by her IVF drugs. 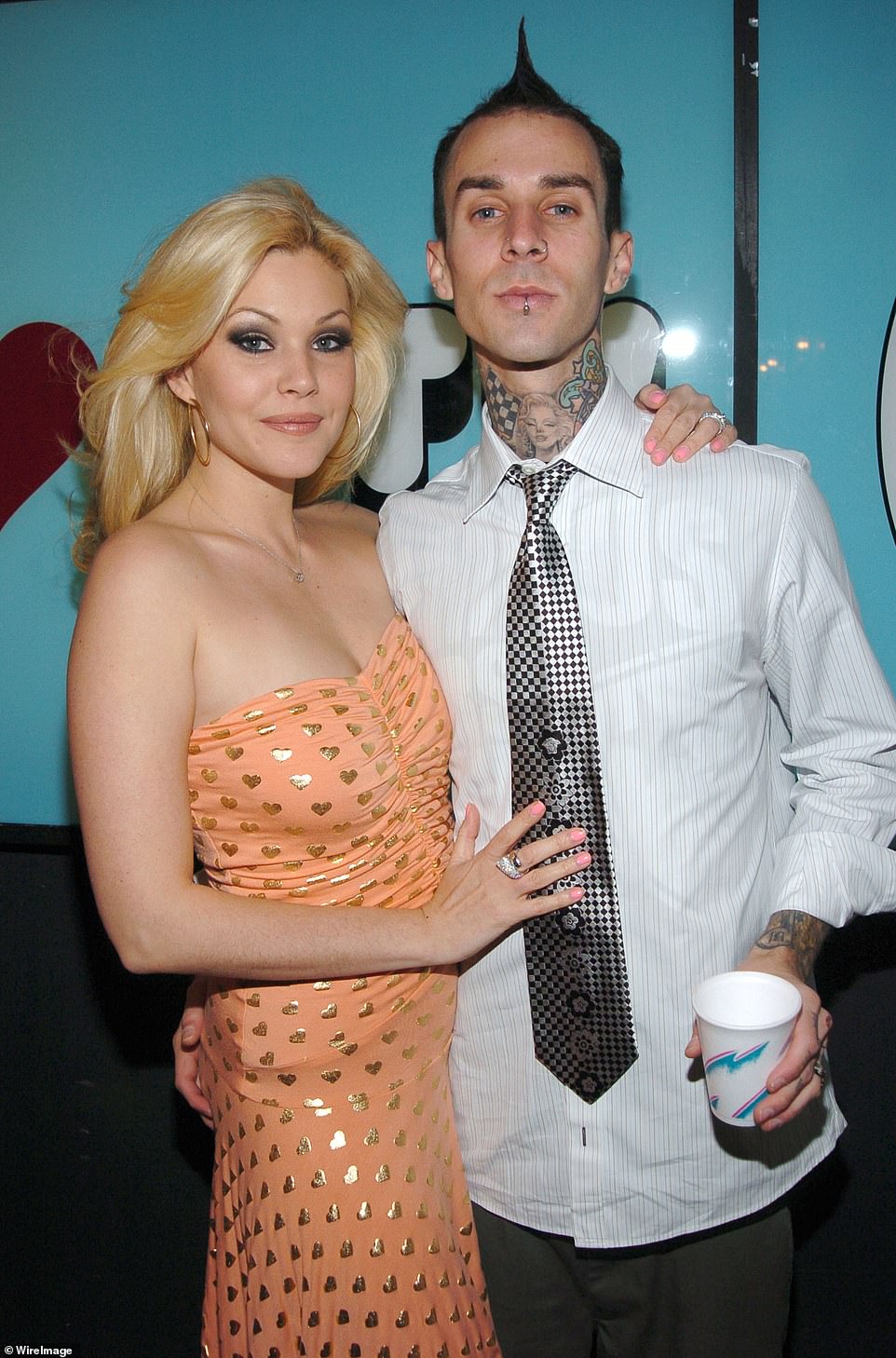 They used to be a power couple: Moakler and Barker arrive at the MTV’s show TRL in 2005

‘I’m, like, it’s so rude to comment on people when you have no idea what they’re going through,’ she said.

Kris looked flustered, replied, ‘Based off of what? A drug?’ with Kourtney replying, ‘Yes,’ though she didn’t specify what medications she had been taking as part of her fertility treatments.

IVF is usually used by women or couples who are struggling to conceive naturally, and it involves the retrieval of eggs from the ovaries, which are then fertilized by sperm in a lab, before being transferred into the uterus.

Many women who are preparing to undergo IVF will be given one or more forms of fertility drug by their doctor, which are used to trigger the release of hormones that then stimulate egg production.

In 2008 one of the first studies into the long-term effects of follicle stimulation concluded that IVF ‘appears to have no lasting impact on the timing or symptoms of the menopause’, however, the research is yet to be cemented. 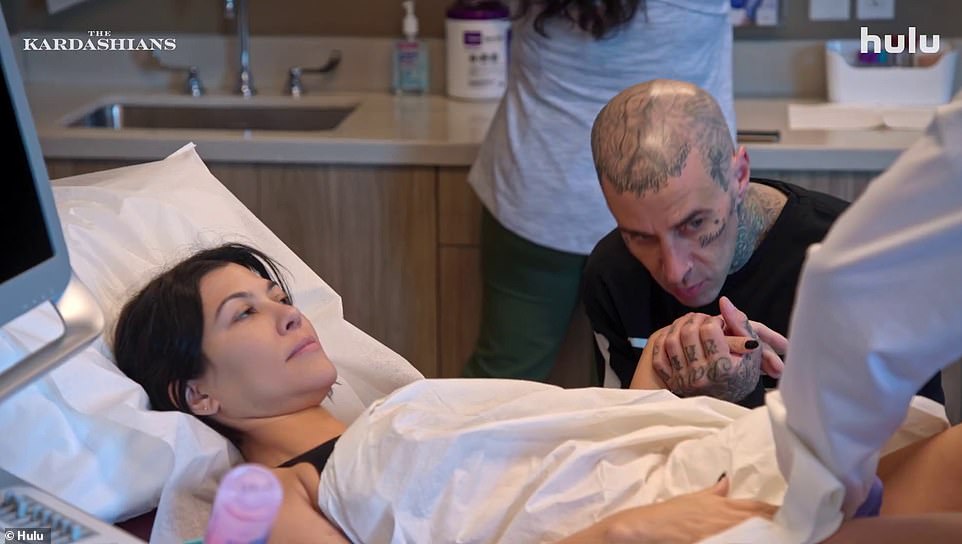 Fertility struggles: Kourtney claimed that her attempts to conceive a baby via IVF ‘put her into menopause’ while trying to have a baby with Barker 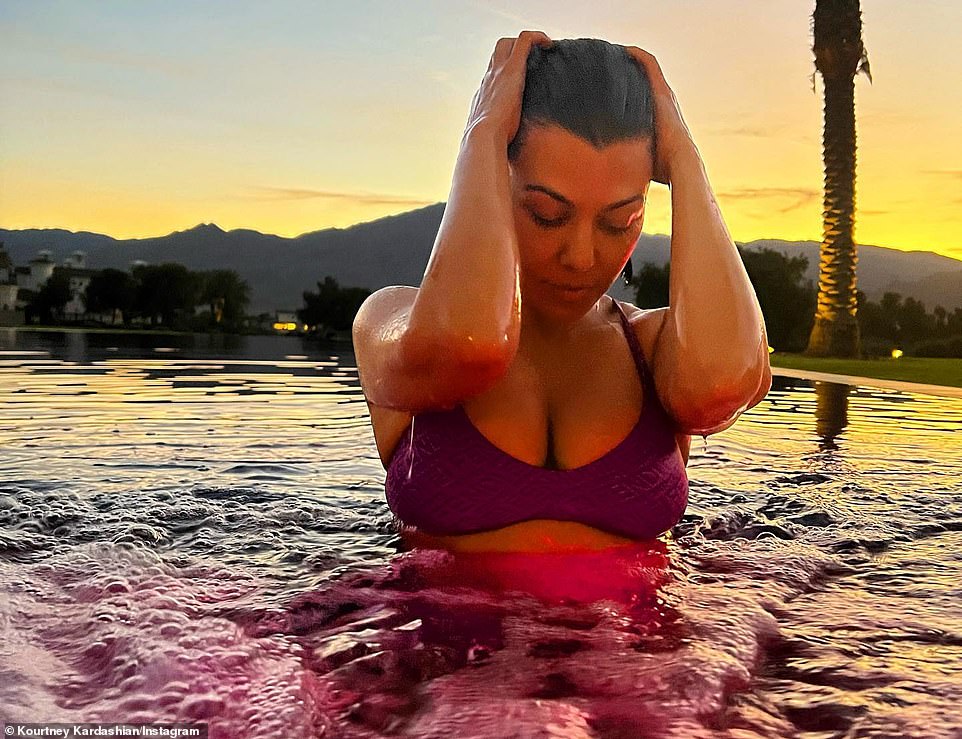 Trolled: Kourtney also shared her upset over the ‘rude’ comments she has recently received about her weight gain, which she says was also triggered by her IVF drugs 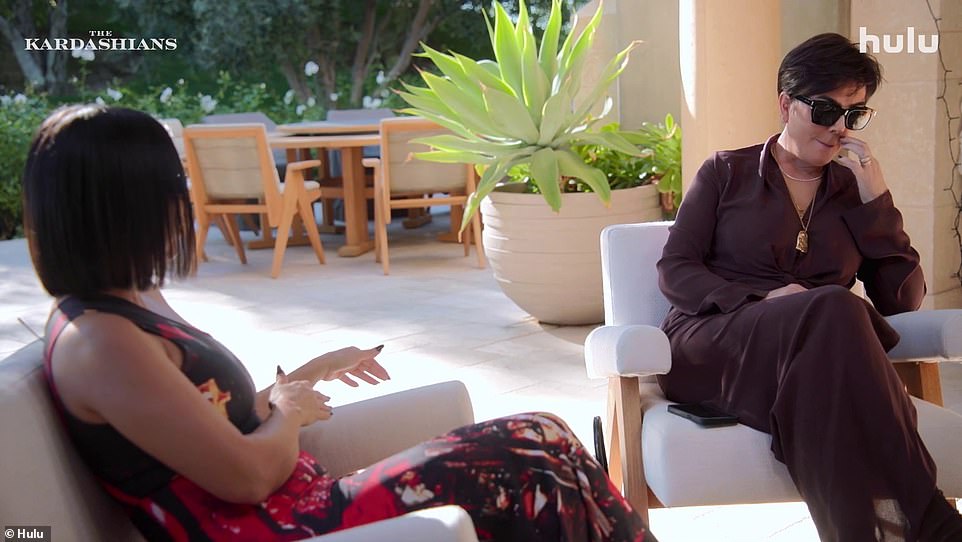 Taunts: During a conversation with her mother, Kris Jenner, she said ‘The medication that they’ve been giving me, they put me into menopause. Literally into menopause’

Kourtney didn’t clarify in the clip if she is still menopausal, or whether she was just experiencing menopause-like symptoms, which include irregular periods, hot flashes, chills, night sweats – and weight gain.

Fertility drugs have been known to cause symptoms that are very similar to those experienced during menopause, including hot flashes, weight gain, changes in mood, and bloating.

Typically, menopause occurs when a woman is between the ages of 40 and 55, and it is diagnosed after a person has gone 12 months without experiencing a menstrual cycle. After menopause, a natural pregnancy is no longer possible, but IVF is still an option, and previously frozen eggs can still be implanted. It’s not uncommon for women to gain weight during IVF treatments as hormone injections can affect your weight and also your hunger levels. 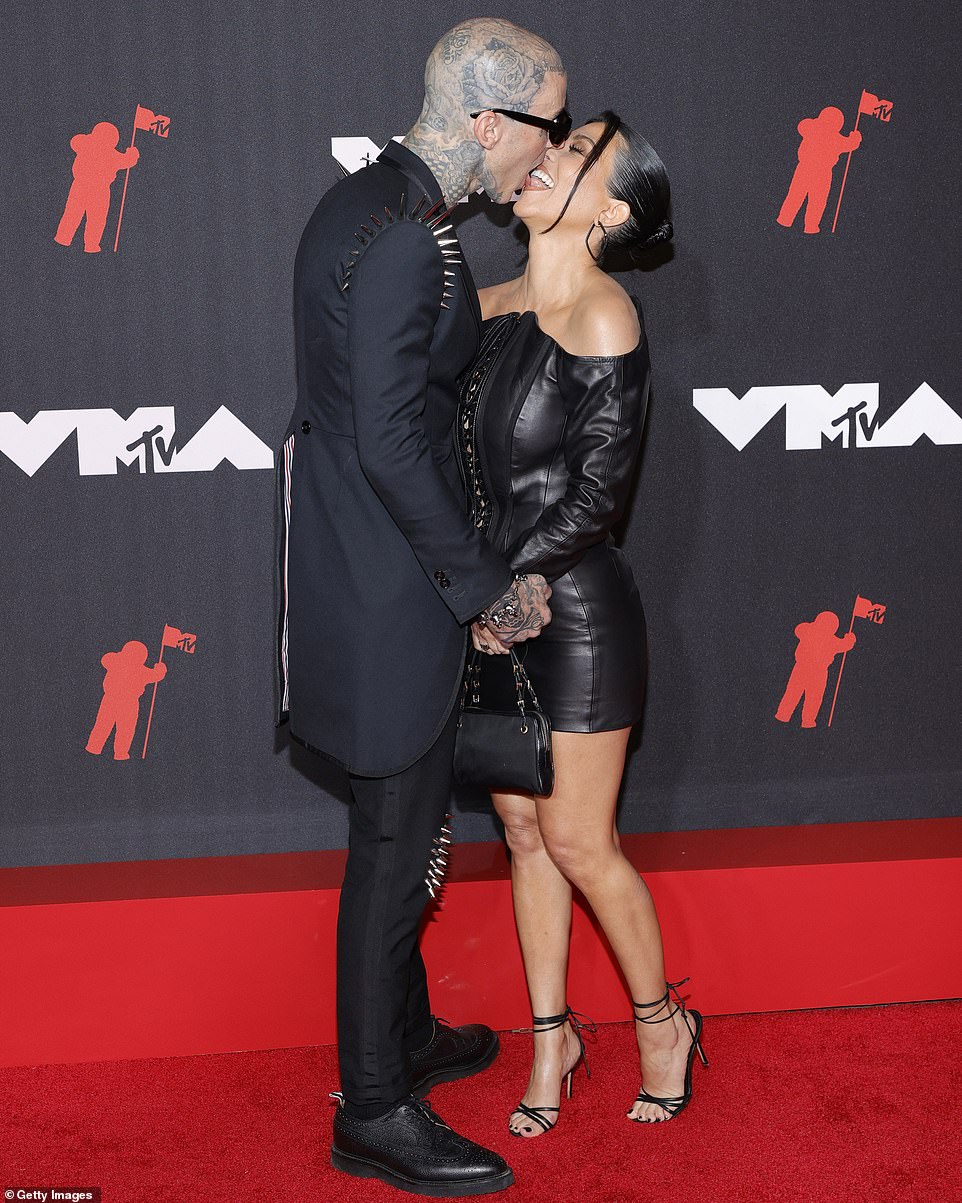 Naughty: Travis and his new wife Kourtney seen in a tongue lock at the 2021 MTV Video Music Awards at Barclays Center in the Brooklyn borough of New York City