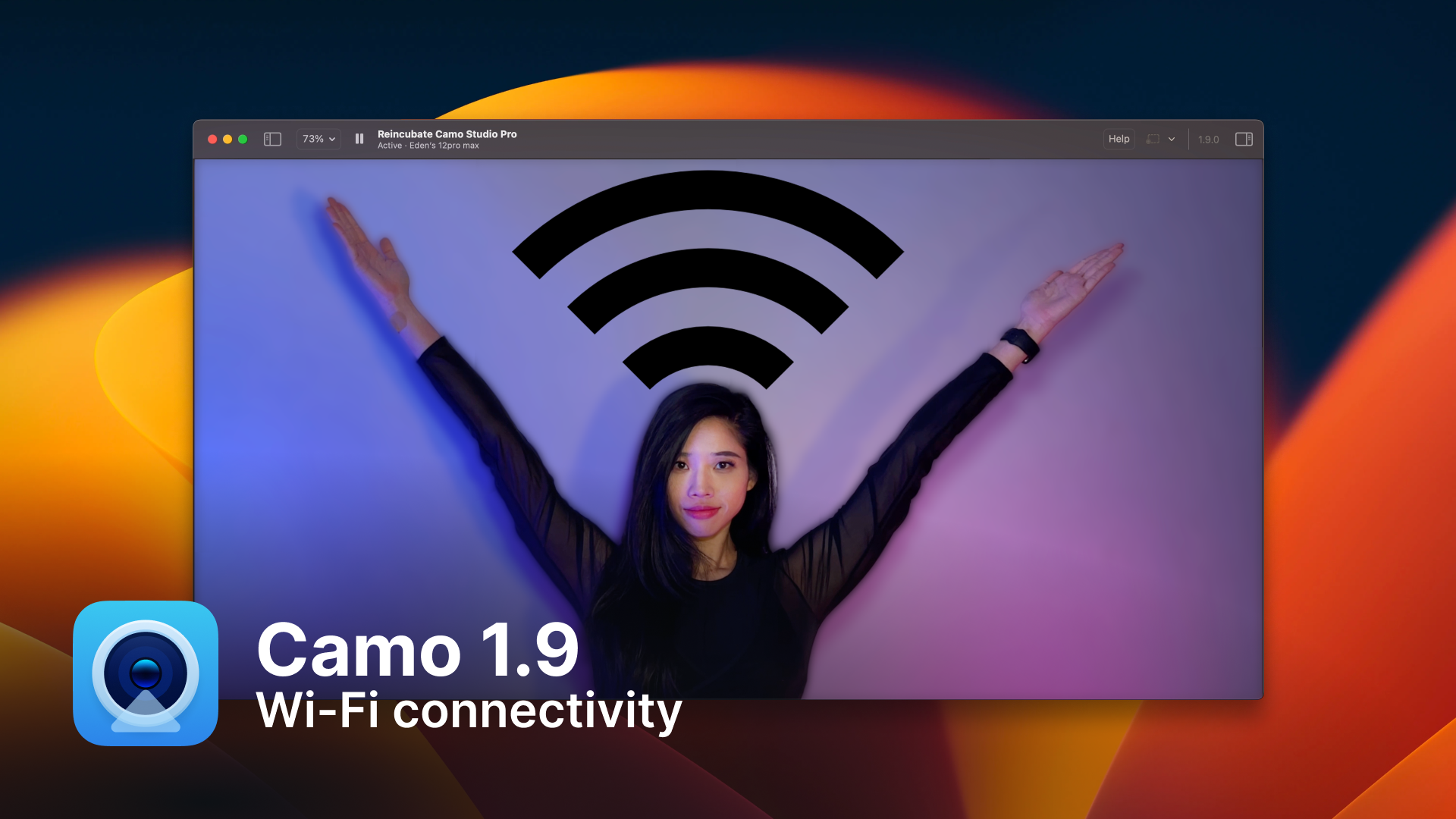 Camo, the pioneering “Phone as a Webcam” App, Gives Users New Practical and Creative Options for Standing Out on Video Calls, Recording & Streaming – across MacOS, Windows, iOS and Android platforms, in any combination.

LONDON  — Reincubate, makers of Camo, today announced the release of Camo Studio 1.9, enabling broadcast-quality video to be recorded or streamed from phone to computer via Wi-Fi. This new capability unlocks wireless, high-definition capture, and gives users the choice of connecting Camo Studio’s intuitive and precise picture enhancement tools with or without a USB cable. It’s the next leap for the software that harnesses the advanced optics of phone cameras to capture clear, pro-level video while presenting, meeting, creating content or streaming; and it’s an update for everyone – going far beyond Apple’s Continuity Camera functionality, Camo offers Wi-Fi or USB pairing support for any combination of iOS, Android, MacOS and Windows, in addition to 60 FPS, smart zoom, video stabilisation, overlays, lens selection, granular image control, AR effects, enterprise support, a powerful SDK, and a host of other features.

“We’re excited to bring Wi-Fi connectivity to Camo, while continuing to ensure that our software unlocks video superpowers for presenters, creators and streamers across the widest range of operating systems and devices.” said Aidan Fitzpatrick, CEO of Reincubate. “We find that each update to Camo Studio’s expansive capabilities opens up new possibilities for our users, and we’re looking forward to what the Camo community creates with this added flexibility.”

Unleashed or Powered Up – You Decide

Thanks to Camo 1.9’s Wi-Fi connectivity, users can decide how they want to pair their phone with Camo Studio’s powerful controls. Video conferencing can be simplified, enabling those pressed for time to get set up or move on to the next task more quickly. For Streamers and Content Creators, connecting to Camo Studio via Wi-Fi introduces new options for multicam setups, along with additional scope for capturing hard-to-reach angles or changing location while recording. Whether users want the new latitude that comes with going wireless, or choose to keep their phone charging while streaming or recording, they will stand out and look amazing with Camo’s extensive feature set.

Also new to Camo Studio 1.9 are Camo iPhone lockscreen widget, enabling quicker app access, and Arabic translation. These new features are available today in Camo 1.9 for iOS, macOS, Android and Windows. Camo is available at camoapp.com, the App Store and the Play Store.

Founded in 2008, Reincubate makes Camo, the app that gives you video superpowers. By using the amazing cameras in cell phones, Camo provides video quality far in excess of any webcam or entry-level DSLR at a lower cost, with better software, and less hassle. Camo has been App of the Day in 168 countries in the App Store, and has been featured in both the WSJ and NYT Wirecutter. Reincubate is based in London, UK, with a team distributed around the world. For more information, visit reincubate.com.