Machine Gun Kelly has sparked outrage after he dressed up as a priest for Halloween and then carried out a communion rite on his fiancée, Megan Fox.

Wearing a priest’s robe while holding a chained leash around the actress’ neck, Kelly, 32, placed a wafer in Fox’s mouth similar to that used in the sacred Christian practice.

“On Sundays we take communion,” Fox – who was wearing patent leather lingerie with fishnets – captioned a series of photos from the controversial moment on Instagram, while MGK shared a video on his account.

Watch the clip above.

Social media erupted after the couple shared the photos and videos on Instagram, with many labelling their antics a “mockery” of Christianity.

“Let this be mocking ANY other religion/worldview and everyone would be so upset. I swear the obsession with mocking Jesus and the Christian faith is just so sickening and hateful. Not surprised though,” one commenter wrote, while another user argued: “Notice how Christianity is the only religion that is openly mocked and people find it comical?? Hmm.”

Yet another fan chimed in: “Totally dislike these costumes. And to mock communion is sad to me!!! I’m a fan of you both but damn this was jus like a total WTF MOMENT FOR ME!!!!”

As they attended the star-studded Casamigos tequila party in LA on Friday, MGK appeared to be snorting what looked like a powdered substance from the Transformers actress’ breast.

“happy Halloween virgins,” he captioned a carousel of Instagram photos from the party.

But some of their followers found their costumes and video overstepped the line.

“tommy lee was handcuffed and sent to jail for six months for felony spousal abuse but apparently that’s trendy now, huh,” one Twitter user commented, referring to Mötley Crüe drummer’s previous run-in with the law in 1998. 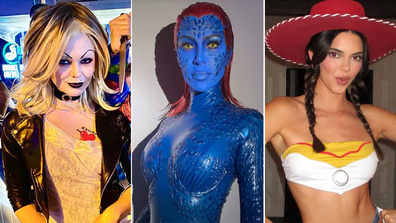