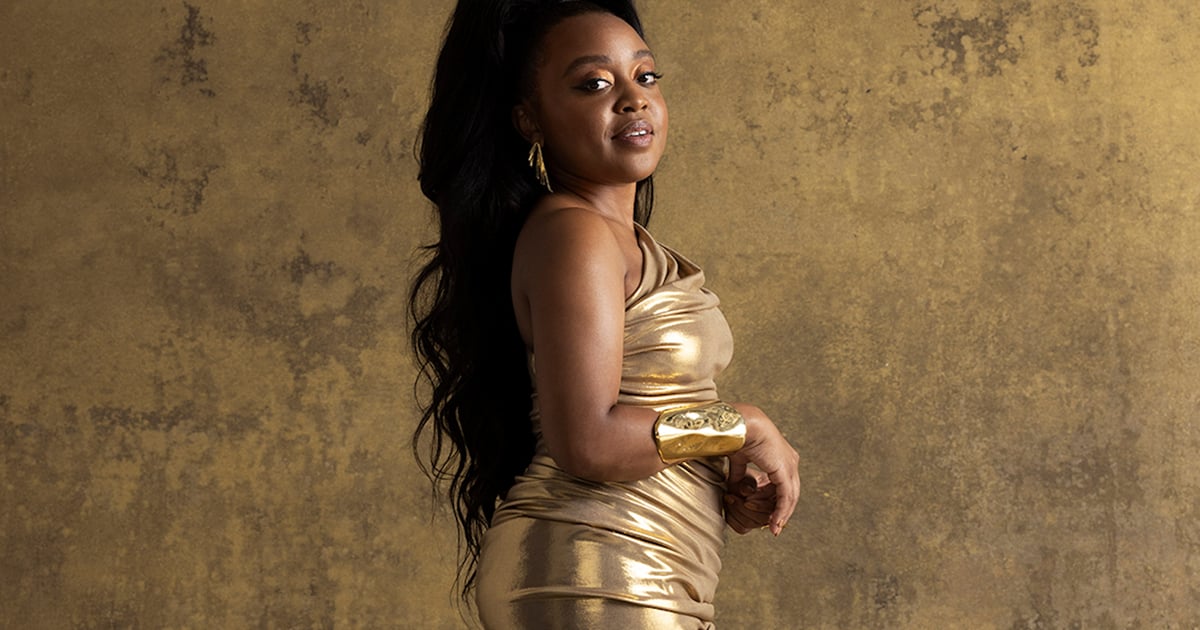 American comedian, writer, and creator of ABC’s “Abbott Elementary” Quinta Brunson stars on the cover of Essence’s 2022 Black Women in Hollywood issue, which celebrates the voices who have uplifted Black women in film. This year, the 32-year-old game changer shares the spotlight with actors Chanté Adams, Aunjanue Ellis, and Nia Long. Styled by Scot Louie, Brunson’s editorial emphasizes her growing stardom told through the lens of vibrant golden looks from the likes of Fendi, Louis Vuitton, and Norma Kamali.

“Our ability to shine the light is really strong. That’s really important and I wanted to be a part of providing that.”

Brunson wears an ivory satin, structural gown on her cover from Malaysian designer Lee Khoon Hooi — an angelic number complete with a wide, rhinestone-encrusted belt that’s a nod to the modern, metallic outfits she sports for the interior shots. On the cover, Brunson’s look is complete with hefty yet elegant chandelier earrings from Alexis Bittar. She goes on to pose in Norma Kamali’s ever-popular Diana dress, a one-shoulder, curve-hugging design with a built-in bodysuit that comes in several colorways. This version is in gold lamé, the most eye-catching of fabrics. The outfit is complete with hammered gold cuffs, earrings, and towering wedge mules that also finish off a two-piece Fendi pantsuit. Brunson wears the vest top with nothing underneath, baring her shoulders and a deep, plunging neckline. The looks are sophisticated, sexy, and smart, speaking to Brunson’s character and bold perseverance in the world of comedy.

The West Philadelphia native came up with the idea for “Abbott Elementary” because she was inspired by schoolteacher Joyce Abbott and her mom, who is also a teacher. Brunson aimed to honor the educators who continue to show up for their students despite the many challenges they face. After debuting in December 2021, the sitcom surpassed “Modern Family”‘s ratings and has only amplified Brunson’s popularity.

While she reminisces about attending the Essence Black Women in Hollywood luncheon back in 2019, she didn’t expect to ever be the one honored with a cover. “Being there with all these women recharged me, and I remember leaving there thinking, ‘I need to go to this every year.’ I didn’t even think in a million years that I’d be sitting here,” she says in her Essence Uncovered video, which offers a behind-the-scenes glimpse from her day on set with photographer JD Barnes. “I don’t even know what to say, really, so I’m just here, having a good time, taking a little picture, doing a little thing,” she laughs, sporting a gold-embroidered Louis Vuitton minidress later styled underneath a black feathered cape.

“Life can be dark and horrible, but what makes humans so resilient is their ability to find the light in dark situations,” Brunson says in the article, written by editor Veronica Wells. “I think that’s the only reason why we’re still on this planet. It’s certainly the only reason Black people are still here. Our ability to shine the light is really strong. That’s really important and I wanted to be a part of providing that.”

And with that, it becomes clear why Brunson’s gold, gleaming outfits were chosen for her first Essence cover story — they, too, help to shine her light.

Click through for two more photos from Brunson’s editorial, and shop a shortened version of the Norma Kamali Diana gown she’s wearing.