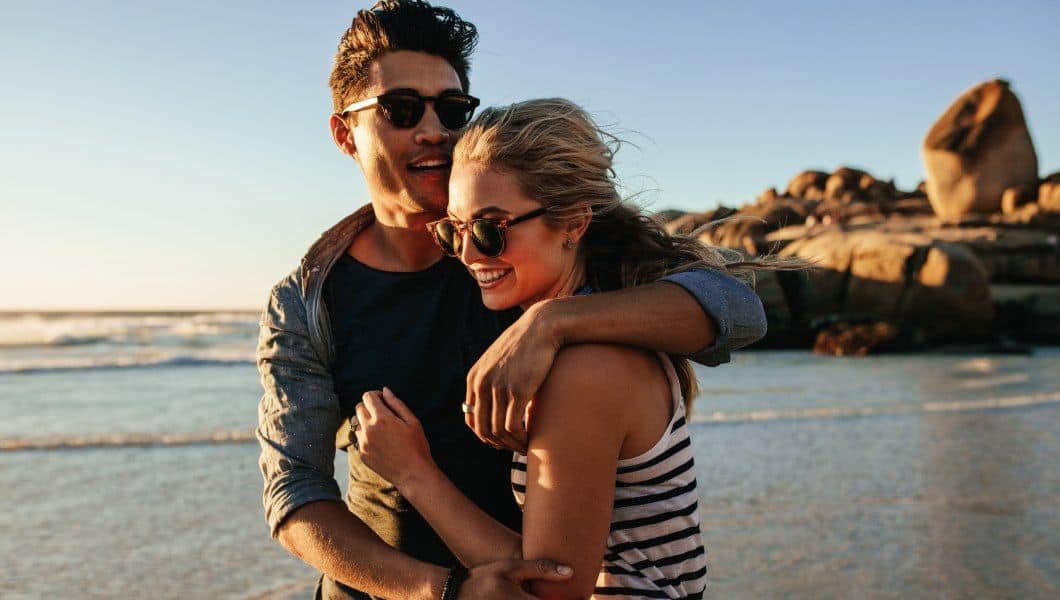 Relationships, we can probably all agree, are a tricky business at the best of times. Getting from a swipe right on Tinder, to making it past the first date and then sailing into ‘official relationship’ territory, well it can all feel a lot like running a gauntlet that you’ve been incredibly poorly prepared for. But if you do manage to make it successfully into coupledom — slaps on backs and clinking glasses from all of us here – the next question you’ll need to ask yourself is this; are they really ‘The One’?

Now regardless of whether you’re onboard with the idea that there’s just one single person out there, among the 7.6 billion people on Earth, that you’re destined to spend the rest of your life with, the fact remains that some people are just better suited to each other. Here’s a cute Answers post talking about that magic.

It’s also true that, once you’ve presumably found this adorably compatible creature, knowing whether you’re meant to be together long-term or something akin to lusty convenience, is again, well, a bit tricky.

Do you feel calm, at peace, and genuinely happy? That is a great indicator.

“When you’ve found The One, the relationship just flows. Things are fairly easy,” says the admirably optimistic Jeannie Assimos, Chief of Advice at online dating site eHarmony. “You understand each other’s viewpoints and perceptions, and either accept them or feel the same way. If a relationship is characterized by conflict, strife or butting heads on a regular basis, that likely tells you the compatibility is not there.”

TAKE YOUR RELATIONSHIP TO THE NEXT LEVEL

“A huge indicator that you’ve found The One? It’s just easy being with this person,” she says. “You feel at home, totally comfortable, and are able to be yourself. Paying attention to how we feel when we’re around someone is important. Do you feel calm, at peace, and genuinely happy? That is a great indicator.”

Trusting your gut feeling, however, can feel like a leap of faith. So how about a checklist of science-backed indicators instead?

Luckily, there’s a cohort of top psychologists and relationship experts out there who have made it their mission to uncover the complexities and subtleties of love’s effect on the brain. From changes in your vocabulary to tell-tale Instagram behavior, here’s the expert take on whether you’re dealing with a fling or the real thing.

A sure-fire indicator of a relationship being the real deal is that you don’t experience that ‘out of sight, out of mind’ phenomenon when your partner isn’t around. Instead, you’ll tend to think about them a lot – almost all the time, in fact.

A 2005 study carried out by researchers at New York’s Stony Brook University suggests this is because real love and genuine attachment actually alter the biochemical reactions taking place in your brain.

When you think about The One, you’ll get a surge of happiness-boosting neurotransmitter dopamine plus a lighting up of the brain’s reward centers.

All of that makes us feel warm and fuzzy, which is why we’re more likely to keep indulging in these happy thoughts regularly. Especially in the earlier stages of a strong relationship, when the effects are at their most potent.

As Assimos quite rightly points out: “The One is not going to try and change you. They’ll accept you for who you are, and become your biggest supporter in life.”

Broadly speaking, that’s true. However, one way in which they will inevitably, albeit unintentionally, change you is by influencing your daily pronoun use.

In a 2002 study, psychologists at the University of Texas at Austin, found that those who feel deeply connected to their partner are more likely to use plural pronouns such as ‘we’ and ‘us’, rather than the singular ‘I’ or ‘me’.

The findings have since been confirmed by every person who’s ever had to attend a couples’ dinner as a singleton. And we feel for you.

Old Willy Shakes was right on the money when he declared the course of true love to be an often rocky road. But as research psychologist Luis Rubén de Borbón observes, a willingness to fight for the success of your relationship is what really sets The One apart. Even more so than how ‘compatible’ two people might be on paper.

A successful relationship… hangs on by the sheer will power and want to stay in a relationship.

“Everyone who is unhappy [in their relationship] naturally blames it on the facade of compatibility,” he writes. “They fail to realize and comprehend that a successful relationship does not hinge its posterity on how alike you are, instead it hangs on by the sheer willpower and want to stay in a relationship.”

Leading life coach, Olga Levancuka, agrees: “You need to keep in mind that finding The One doesn’t mean finding a clone of you who shares exactly the same passions or meets your exact expectations,” she says.

As Levancuka describes, if you’ve met The One, you’ll both be cool with making certain sacrifices for each other, even if historically, you’ve always been more about looking out for yourself as number one.

Psychologists call these ‘costly commitment signals’ – when we carry out acts or behave in ways that are likely to ‘cost’ us either in terms of our time, money or our emotions, simply because we want to help our significant other.

A 2015 study carried out by psychologists at Japan’s Kobe University, found that relationships where this kind of behavior was either absent or infrequent, were less likely to go the distance.

Those folks who post loved-up couple selfies on the regular? They’re likely trying their best to compensate for a bond that, in all reality, just isn’t there. According to Levancuka, if your partner isn’t plastering your relationship all over their social media feeds, it’s actually a strong indicator that all’s well in Couplesville.

If they are oversharing it could be a sign of insecurity

“Unfortunately, social media is now an essential part of our daily lives, to the point where every moment needs to be documented and recorded. Happy couples who take their relationship seriously, however, tend not to share much information about their relationship online,” she explains.

“If they are oversharing it could be a sign of insecurity, or that they’re more concerned about how you add to their social image rather than being focused on how you enrich their day-to-day life.”

You’ve Polled Your Friends and Family

According to psychologists, what those closest to us think of our partner can have a huge influence on how a relationship turns out.

When you’ve found The One, you want everyone in your life to meet them

A 2014 study also found that since those around us can have such an impact on our love lives, it’s common to want to ‘marshall support’ for your budding romance.

So, if you’ve not only introduced your partner to your friends and family but also found yourself soliciting feedback from all parties concerned while simultaneously highlighting all your partner’s virtues, it’s highly likely you’ve found The One – especially if everyone gelled on the night.

“When you’ve found The One, you want everyone in your life to meet them, and get to know them,” says Assimos. “You are genuinely excited about the prospect of being with this person, and you’re no longer are looking around to see what else is out there.”

They Are Your #1 Cheerleader

According to famed psychological researcher Dr. John Gottman, supporting each other’s ‘life dreams’, aka your long-term goals and ambitions, is a key component of a healthy and lasting relationship.

Couples who focused on building something together, whether it be a business or working towards a shared goal, tended to stay together the longest.

For Gottman, The One should “look up to you, admire you, and respect you.” In other words, they’ll become your biggest champion and an ever-reliable source of support and encouragement.

Levancuka takes the same view: “The happiest relationships are built on mutual respect, so even if you both have different interests you want to pursue, The One will be there to encourage and support you.”

You’ll find yourself heavily invested in helping to build them up, too. In fact, Gottman’s years of research found that couples who focused on building something together, whether it be a business or working towards a shared goal, tended to stay together the longest.

Bedroom Gymnastics Isn’t Your Only Hobby

Naturally, sex plays a huge part in a healthy relationship, and being physically attracted to your partner as well as enjoying their company is a vital checkpoint.

If all your plans somehow incorporate time alone where you might be able to have sex then the alarm bells should start ringing.

But if sex is the only thing you do together when you’ve managed to carve out some downtime, we’re very sorry to point out that this may not be a good sign.

“Sex is great and you should be having lots of it, but it’s important to build a stronger, emotional bond beyond that,” says Levancuka. “If all your plans somehow incorporate time alone where you might be able to have sex then the alarm bells should start ringing. With The One, you need to be able to have fun around each other without the need for sex.”

“When you’re synced with your partner you are fully present with that person – mind and body. In a romantic relationship, it’s important to feel connected to someone in this way. When that connection is there, we feel seen, heard, valued, respected, and cherished,” says Levancuka.

But if you thought this whole business of synchronicity was more pseudoscience than anything concrete, a 2016 paper published by research psychologists is here to prove you wrong.

As Levancuka quite rightly asserts: “Scientists have found that some couples are so in tune that their brains begin to work in sync. That means they’ve reached a state in which their nervous systems are ticking over in harmony, helping them to read each other’s thoughts and emotions.”

According to the researchers, just sitting next to The One for 15 minutes is enough to sync up.

Now you’ve got the checklist, better start paying a closer eye to what’s going on up top.