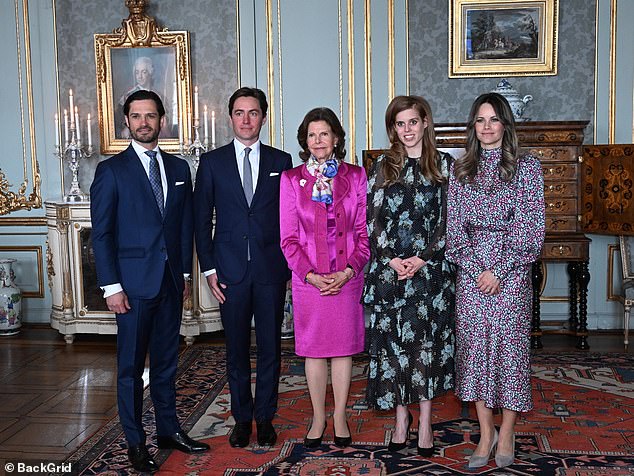 Princess Beatrice was joined by her husband Edoardo Mapelli Mozzi in Stockholm today as they met with Prince Carl Philip and Princess Sofia of Sweden to discuss dyslexia.

The Queen‘s granddaughter, 33, cut an elegant figure in a mid-length black and blue floral gown by designer Zimmermann as she met the Swedish royals at the Royal Palace for the The World Dyslexia Assembly earlier this morning.

Beatrice was herself diagnosed with the learning difficulty, which can affect reading, writing and spelling, when she was seven and has previously referred to the condition as a ‘gift.’

The occasion marked a rare joint public outing for the royal’s husband Edoardo, who also has the condition. 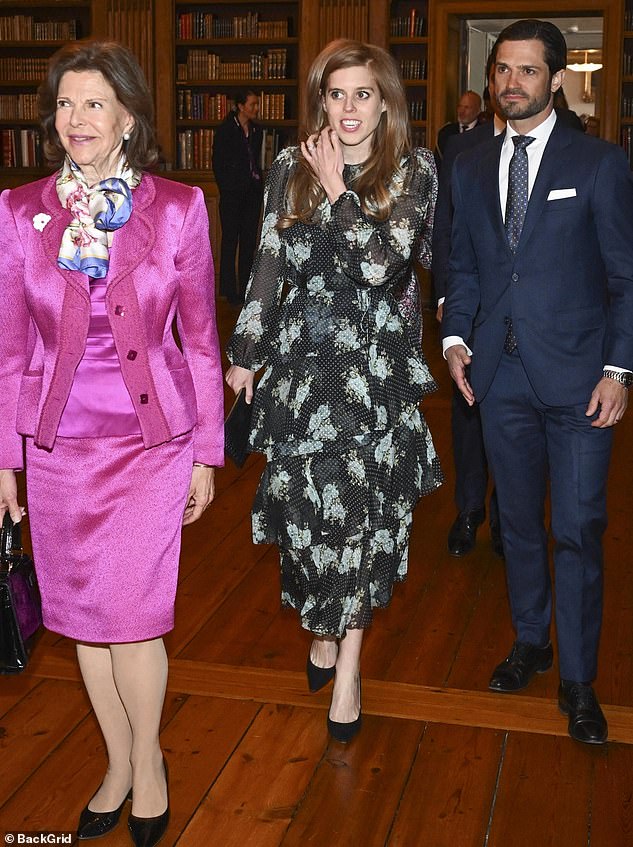 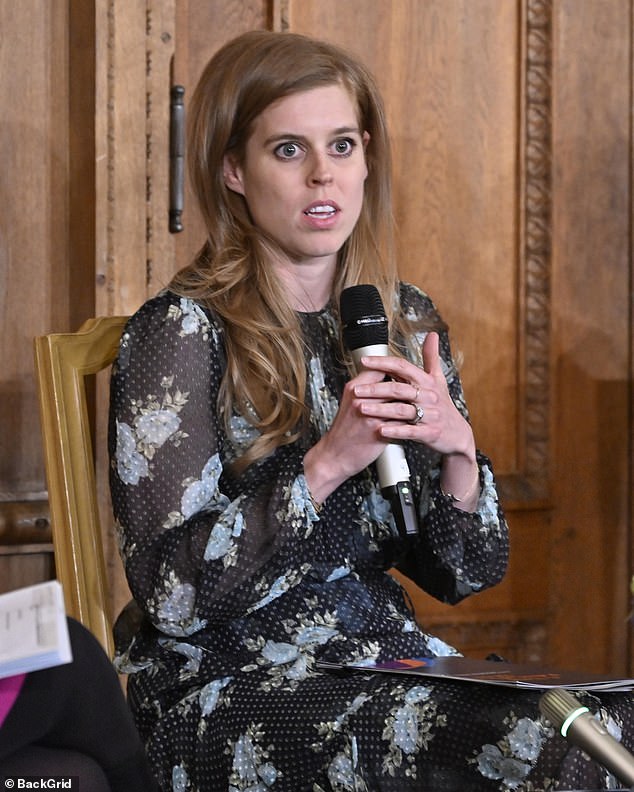 Princess Beatrice appeared in high spirits at the event, wearing her auburn locks in loose waves.

She opted for natural makeup for the outing, with a sweep of eyeliner and a touch of lip gloss.

Meanwhile she donned a black polkadot dress from Zimmermann for the occasion, which she had previously worn to the Bahrain Grand Prix in 2019.

The beloved Australian brand was founded in 1991 by sisters Nicky and Simone Zimmermann. 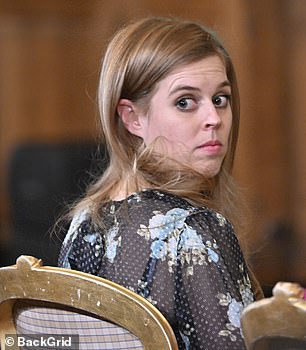 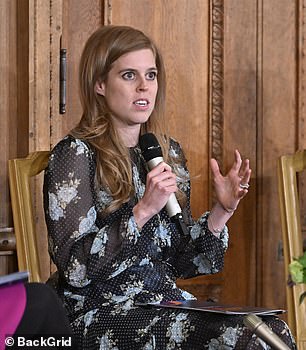 The Queen’s granddaughter opted for a black floral gown for the outing in Sweden today, where she spoke about her experience with the condition

Nicky first started designing dresses and would sell them at Paddington markets before landing a two page editorial in Australian Vogue.

Beatrice joined a group which included Eric Adams Mayor of New York and Sir Richard Branson to call for systemic change to empower Dyslexic Thinking in every school and workplace.

It is the first World Dyslexia Assembly at the Swedish Royal Palace and came in partnership with the Prince Couple’s Foundation, Prinsparet Stiftelse, and is supported by Microsoft.

The World Dyslexia Assembly aims to create systemic change in how the world perceives, defines and supports dyslexia by bringing together sovereign leaders, governments, iconic brands and the most powerful changemakers. 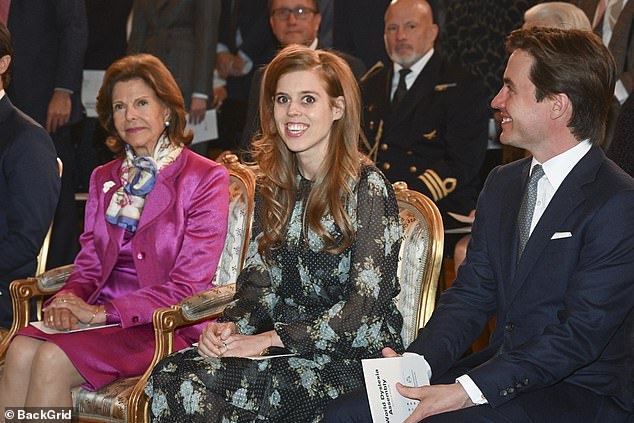 The royal wore her hair in loose auburn waves for the outing earlier today, where she could be seen beaming alongside her husband Edo 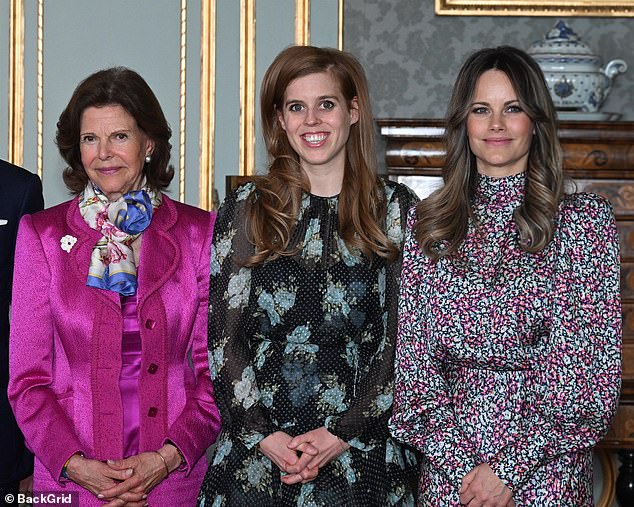 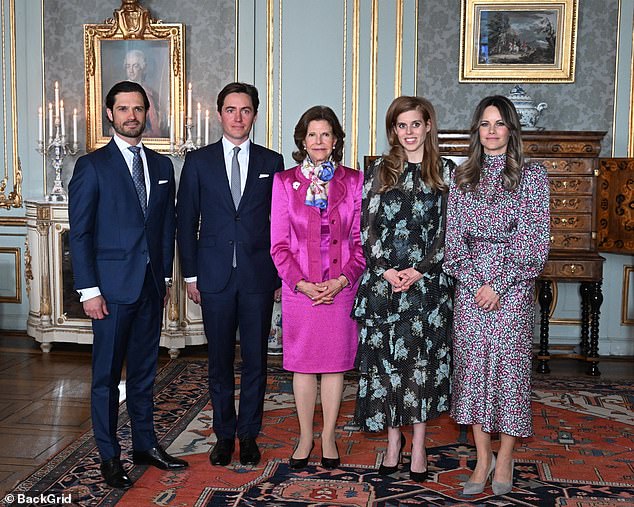 Made By Dyslexia’s mission is to train every teacher and help every workplace to spot, support and empower every dyslexic mind. This mission is aligned with the UN Sustainable Development Goals, and they aim to achieve this by 2030.

Princess Beatrice’s ‘gift’: The common learning difficulty that impacts 1 in 10 people in the UK

Dyslexia is a common learning difficulty that can cause problems with reading, writing and spelling.

It’s a specific learning difficulty, which means it causes problems with certain abilities used for learning, such as reading and writing.

It’s estimated up to 1 in every 10 people in the UK has some degree of dyslexia.

Dyslexia is a lifelong problem that can present challenges on a daily basis, but support is available to improve reading and writing skills and help those with the problem be successful at school and work.

Signs of dyslexia usually become apparent when a child starts school and begins to focus more on learning how to read and write.

A person with dyslexia may:

But people with dyslexia often have good skills in other areas, such as creative thinking and problem solving.

The Assembly was hosted by Robyn Curnow, CNN News Anchor, who is dyslexic herself.

She hosted the panel discussions on how to empower Dyslexic Thinking in the workplace and in education from global leaders including Microsoft, HSBC, Meta, Randstad Sourceright, International Dyslexia Association, Millfield School and many successful dyslexics including Space Scientist, Maggie Aderin-Pocock who explained how their Dyslexic Thinking has helped them to succeed.

The Assembly closed with the handing over of the Made By Dyslexia torch of global change to Eric Adams, Mayor of New York, who will host the next World Dyslexia Assembly in New York City in Spring 2023.

HRH Prince Carl Philip of Sweden said: ‘Through the Prince Couple’s Foundation, Princess Sofia and I wish to do our part to contribute to an inclusive society; a society that enables each individual to reach their full potential.

‘Our wish is that the Assembly contributes to new conversations, new collaborations and new solutions that contribute to supporting every child and youth in being themselves.’

Meanwhile Kate Griggs, CEO of Made By Dyslexia, said: ‘The World Dyslexia Assembly is building the ultimate alliance of game-changers across the globe and includes sovereign leaders, governments, iconic brands and powerful changemakers, all who share our passion to create systemic change to level the playing field and help to create school systems where every dyslexic child thrives… and to empower workplaces where every dyslexic adult can flourish.’

‘Imagination and innovation will help us find solutions to the big problems that we face.

‘That’s why we must help governments and organisations all around the world to realise this too, and why it’s vital we all work together to empower Dyslexic Thinking in every school and every workplace

‘The World Dyslexia Assembly is creating a global movement that will help us do just that.’

Princess Beatrice has previously spoken movingly about her experience of dyslexia. 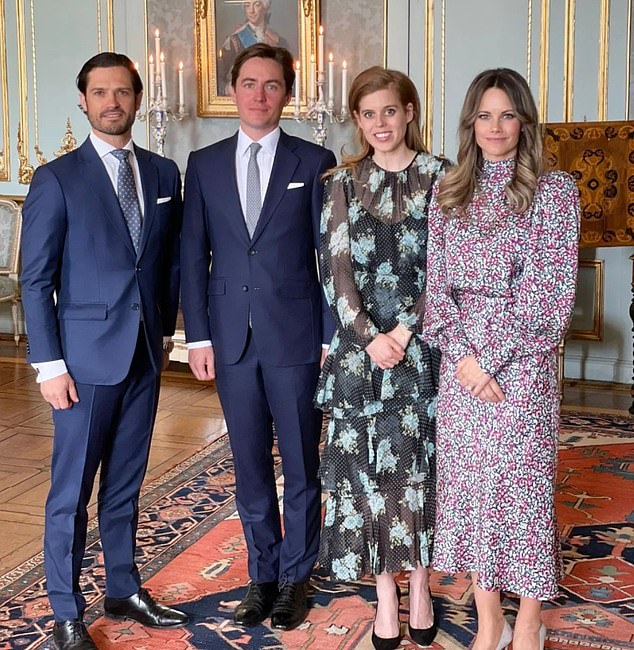 Beatrice was joined by her husband Edo at the event, where she spoke alongside Prince Carl Philip and his wife Princess Sofia

Speaking to  Hello! magazine, she referred to it as a ‘gift’ because she feels it has offered her different skills in life, saying: ‘I think that having dyslexia and reflecting on where I am right now in my career path, and also as an older person looking back, it definitely has allowed me to look at things in a new way and come up with solutions.’

Her words echo the title of Ron Davis’ 1994 book The Gift of Dyslexia, which became an immediate best-seller and became a bible for people with dyslexia and parents of children with dyslexia.

The princess also revealed in the interview that he also has the condition.

The Duke and Duchess of York’s daughter said that ‘if any child, any bonus son, or future babies that are on their way, are lucky enough to be diagnosed with dyslexia, I feel incredibly grateful to have tools such as the Helen Arkell Dyslexia Charity [that she’s patron of] to be able to tap into, to give them that extra support.’

Beatrice said she considered herself lucky to have dyslexia, saying: ‘I think that having dyslexia and reflecting on where I am right now in my career path, and also as an older person looking back, it definitely has allowed me to look at things in a new way and come up with solutions.

‘I always describe it like being able to think in a circle. Yes, my spelling is appalling, and I wish that I could do something about that.

‘But luckily, spellcheck has sorted that out for me.’

Beatrice added: ‘I think life is about the moments, it’s the challenges that make you. Of course, I would never want there to be any difficult situations.

‘But I feel like if we’re able to embrace some of the tools that we have from the Helen Arkell Dyslexia Charity and other organisations, then I feel very, very lucky that we can have this conversation.’

Princess Beatrice on her Dyslexia

In May 2020, Princess Beatrice opened about her dyslexia in a video for Made By Dyslexia.

The royal said she struggled at school, while her close friends appeared to be ‘so far ahead’, revealing: ‘I think at that stage, those moments of doubt just pop into your head. I’m not good enough, I’m not smart enough. Why am I not like the others?’

In the video clip, which was shared by the charity’s Youtube channel, she continued, ‘I think when you’re in the classroom, those moments are very defining.’

Speaking in the video, she revealed: ‘I was very lucky, I got to go to a school that was very nurturing and very supportive, but I would describe the actual day-to-day learning side of things very challenging.’

Princess Beatrice went on to recall one particular memory from childhood, explaining: ‘We had different colored books to describe how far where your reading levels had got to and I was always on the white books.

‘My best friends were always on the yellow books or the green books. They were so far ahead.’

She said the experience led her to ‘doubt’ herself, adding: ‘I think if I were to say to my younger self do not be defined by those moments that happened to you in that exam or that classroom because they are lifelong learnings.

‘They are lessons that you carry with you, and they build you up to be who you are.’

She said: ‘I’m very lucky I’ve been able to find a job that relies on my communication skills, and not just sitting behind a desk.

‘A lot of my colleagues also have dyslexia because we work in a tech company that is always about looking at things different.

‘I think that’s one of the strengths we have as dyslexic is to look at things differently, be a problem solver, find new ways to do things, be experimental, entrepreneurial.’

She said: ‘It develops as you develop, it grows. It’s part of you, it’s part of how your brain develops.

‘It is not something that is wrong with you. It is a great part of how your brain works, and everybody’s brain works incredibly differently,’ she said. ‘There is nothing wrong, there is just everything that is so right.’