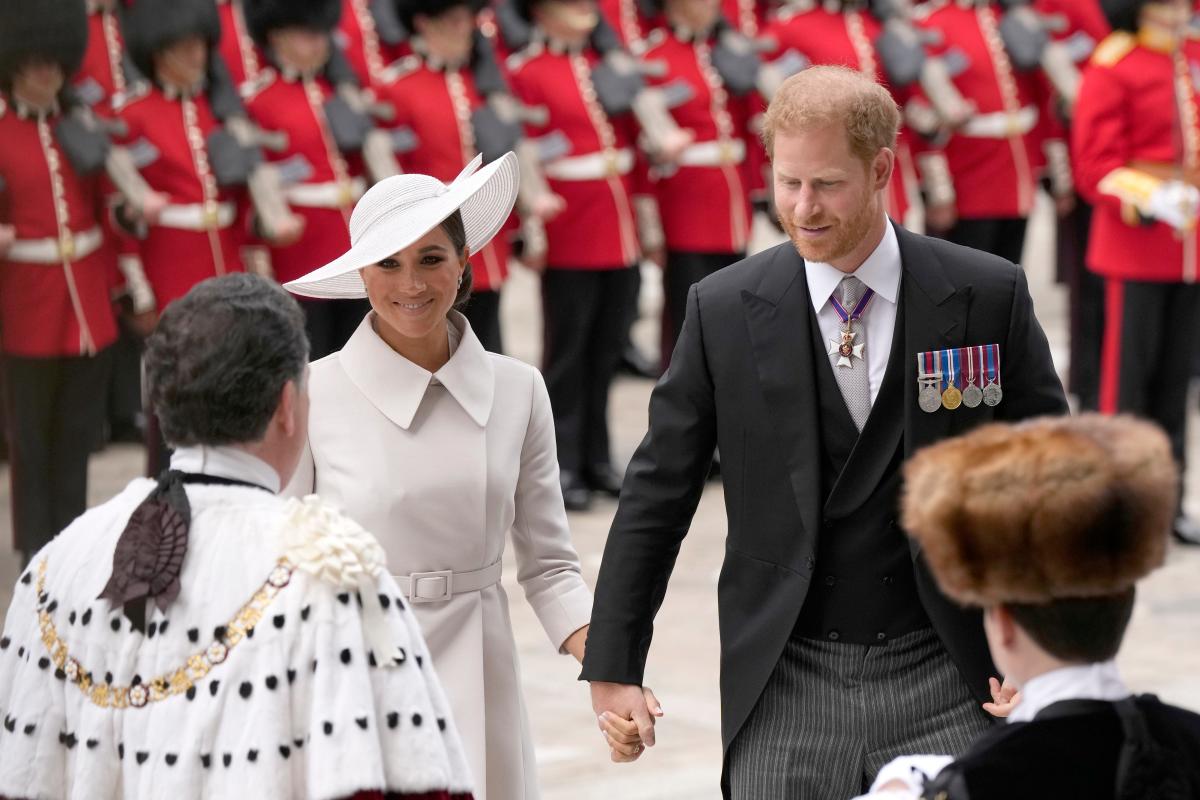 Prince Harry and Meghan, the Duchess of Sussex are back in the U.K. lens after attending Friday’s service of thanksgiving for Queen Elizabeth II’s Platinum Jubilee.

Their private April visit with the queen before the Invictus Games marked the first time they’d returned to their old home since leaving in March 2020, but Friday marks the couple’s first public appearance in festivities marking the monarch’s 70 years on the throne. Celebrations for the occasion began Thursday with a parade and beacon lighting.

For the church service, Meghan wore a stark white dress topped with a white hat to match and Harry wore a suit decorated with a patch of his military achievements on his chest. They were photographed holding hands while entering St. Paul’s Cathedral.

Eyes were even more on the couple since the queen did not attend Friday’s event. The palace announced Thursday she would skip the service due to difficulties getting around that have limited the 96-year-old monarch’s public engagements in recent months.

Many of her family members were in attendance for the service despite her absence including Prince Charles, Camilla, the Duchess of Cornwall; Prince William and Kate, the Duchess of Cambridge.

They also joined the queen Thursday as thousands of supporters cheered wildly as she joined other senior royals on the balcony of Buckingham Palace to watch 70 British military aircraft fly past.

Only working royal members were able to join the queen on the balcony, leaving the Duke and Duchess of Sussex out of public view. The couple, who gave up their royal duties and moved to California two years ago, instead watched from the nearby Major General’s Office.

During the second day of jubilee festivities, Archbishop of York Stephen Cottrell delivered a sermon during the service of thanksgiving.

With the queen skipping the service, Prince Charles stood in for her as she watched the event on television.

The queen’s second son, Prince Andrew, 62, was also expected to attend Friday’s service but did not after testing positive for COVID-19. He also did not appear on the balcony with the queen as he stepped away from public duties amid controversy over his links with the convicted sex offender Jeffrey Epstein.

The congregation at St. Paul’s includes members of the royal family, senior politicians, diplomats and more than 400 essential workers, charity volunteers and members of the armed forces who have been invited in recognition of their service to the community.