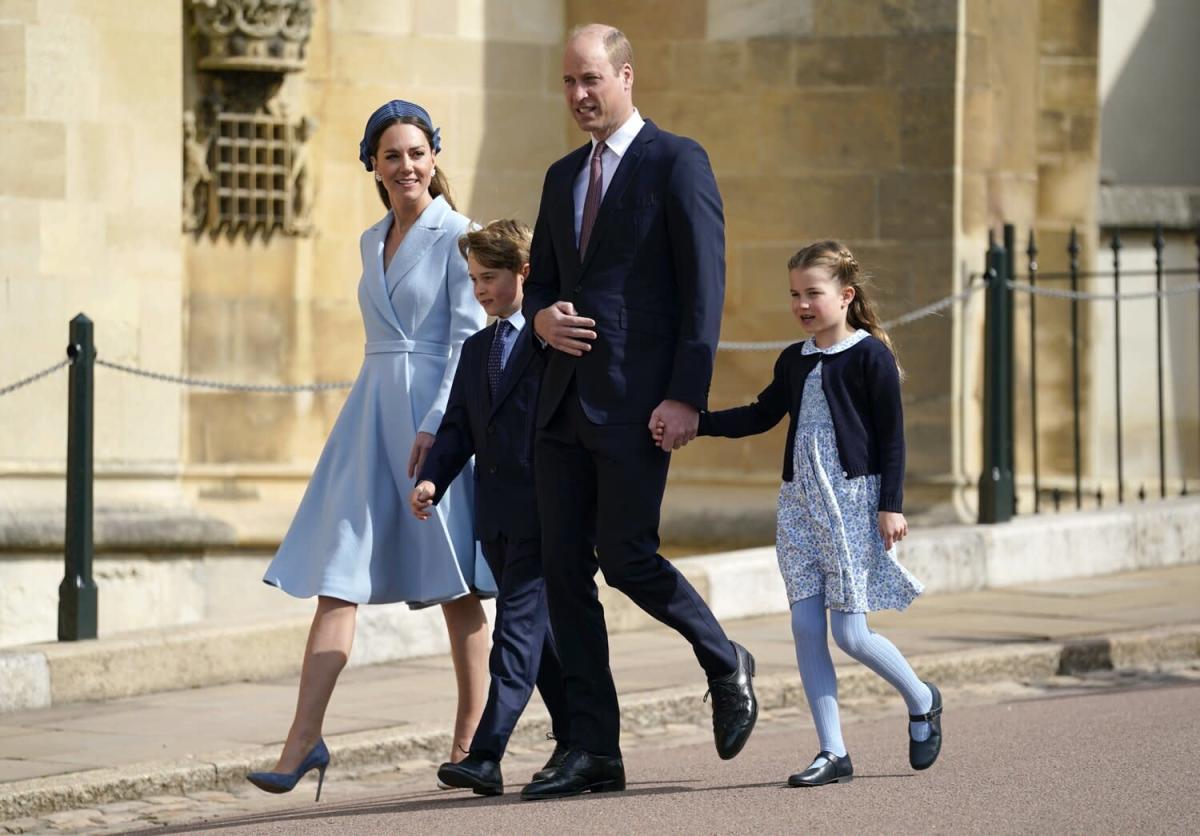 Kate Middleton and Prince William‘s two eldest children had a new first on Sunday: joining the royal family at the Easter Sunday church service. Prince George, 8, and Princess Charlotte, 6, attended the mass at St. George’s Chapel in Windsor Castle (where George and Charlotte previously served as part of the bridal parties at both Prince Harry and Meghan Markle‘s May 2018 nuptials as well as Princess Eugenie and Jack Brooksbank’s big day in Oct. 2018!).

The family coordinated in blue outfits, with Princess Charlotte’s floral dress and navy cardigan perfectly coordinating with the shade of her mom’s dress and headpiece. Meanwhile, Prince William and Prince George looked sharp in suits.

Prince George even practiced his royal handshake while meeting one of the clergymen after the service!

Prince Louis didn’t join his parents and siblings for the holiday outing. Kate and Prince William’s youngest child will turn 4 this month.

Although it marks the Cambridge kids’ first Easter church outing, Kate and Prince William have started to bring their eldest children to more royal events. In addition to Prince George and Princess Charlotte making their royal Christmas debut in 2019, they recently joined the royal family at the Service of Thanksgiving held at Westminster Abbey on March 29 honoring their great-grandfather Prince Philip nearly one year after he died at age 99.

Kate, 40, and Prince William, 39, have shared that their children previously celebrated Easter with an egg hunt.

And in 2020, Prince William and Kate conducted their first-ever full royal engagement via video call amid the coronavirus pandemic, chatting with a school in northern England where the kids of essential workers were being cared for and taught.

Towards the end of the call, the staff made sure to wish the Duke and Duchess of Cambridge a happy Easter, and Prince William assured them that they will be celebrating with plenty of candy.

“There will be a lot of chocolate being eaten here, don’t worry!” he said.

Then Kate turned to her husband with a laugh and quipped, “You keep eating it!”

The little royals have usually celebrated Easter privately, but Prince George was out and about on the holiday back in 2014. It fell during the family’s visit to New Zealand and Australia, and they spent Easter Sunday at Sydney’s Taronga Zoo.

George came face-to-face with a bilby, a rat-like marsupial which is also Australia’s version of the Easter bunny, which was named after him.

The royal parents took turns holding Prince George in their arms and supporting him standing up on the ground, restraining him as he tried to climb into the enclosure to get at the bilby.

“He’s trying to grab his ear,” said Kate, who was wearing a yellow dress perfect for spring.

“If he gets it he’ll never let go,” said William, who kissed the top of his son’s head.

Can’t get enough of PEOPLE‘s Royals coverage? Sign up for our free Royals newsletter to get the latest updates on Kate Middleton, Meghan Markle and more!

Missing from the holiday outing was Queen Elizabeth. It was confirmed earlier this week that the monarch, who will turn 96 next week, would not attend the Easter church service.

But it’s likely that the Queen will have some visitors — she is staying at her apartments in Windsor Castle, so family members may stop by following the church service to wish her a happy holiday.