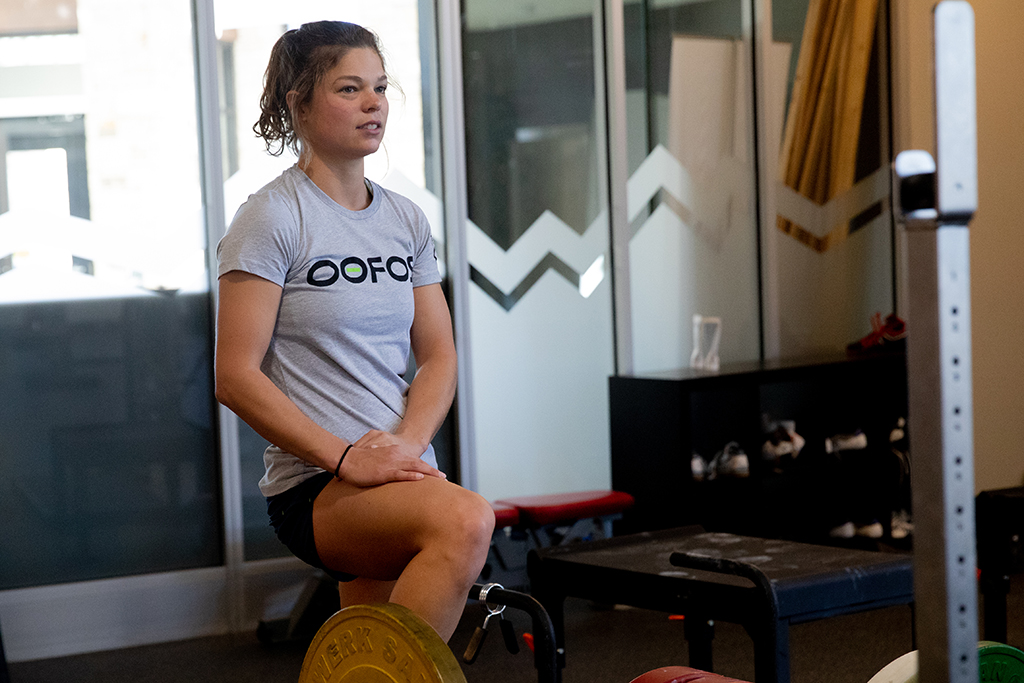 Ariel freestyle skier Ashley Caldwell is coming off a high. The Olympian just swung from a 30-foot trapeze bar in New York — not to mention she won gold at the 2022 Winter Olympics in Beijing in February.

Caldwell was in town with brand partner Oofos for a special high-flying trapeze class to celebrate the release of  the label’s new OOmega OOlala Sandal. The athlete partnered with the brand in January as an official brand ambassador.

For Caldwell, recovery is key to her success in her sport.

“In the summertime, we actually jump into a pool. You know, you’re doing triple backflips 60 feet in the air and landing on flat water. So that’s heavy impact,” she said. “Your body’s getting so much compression. And so when you’re not doing that, you want to make sure that your body is being treated really well. That’s why it’s so important for me to be in recovery footwear.” Then, when it’s winter time, Caldwell explained that she is doing the same moves, but in ski boots, on hard snow.

Oofos is known for its OOfoam technology, which is designed to absorb 37% more impact than traditional footwear, reducing stress on joints. And it was Caldwell who reached out to the company to form a relationship.

Oofos also announced earlier this year that it has partnered with U.S. Ski & Snowboard on a two-year deal as the official recovery footwear supplier for the team throughout the 2022 and 2023 seasons. Throughout the partnership, Oofos will supply the U.S. Ski Team, U.S. Freeski Team, and U.S. Snowboard Team and staff footwear for active recovery after long training and competition days. The brand will also have presence at domestic World Cup events and product showcases.

Caldwell, however, is officially on a break after competing in Beijing. She won gold in mixed team aerials in the event’s Olympic debut on Feb. 10. and placed fourth in the women’s aerials event.

Caldwell told FN that she’s relieved following the major milestone. “I’ve been working for so long and so hard for this big goal that this huge pressure is off of my body. I just feel proud.”

And on narrowly missing a spot on the podium for the women’s aerials, Caldwell said she can still taste the gold.

“It very competitive — everybody wants to be on the podium. And fourth place, notoriously, people would rather get last because they were so close. And I had that so-close feeling, but I also know that every other athlete there worked so hard. They’ve been scared, they’ve gone through ups and downs and injuries and triumphs and tribulations just like I have and I respect those girls and was proud and excited for them, too.”