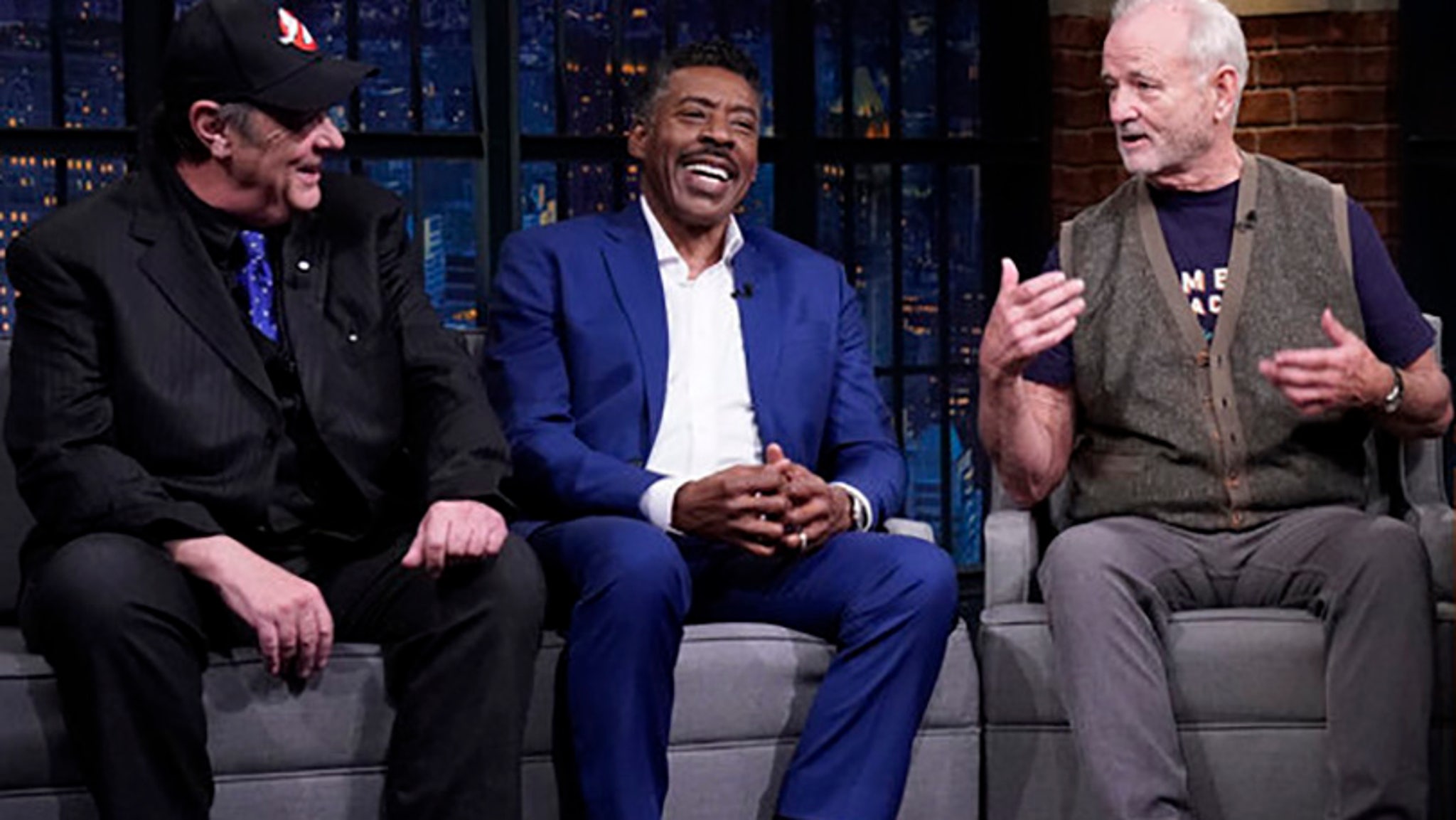 Dan Aykroyd, Bill Murray and Ernie Hudson went from “The Tonight Show” to “Late Night” to reminisce about the original phenomenon and what brought them back ahead of Friday’s premiere of “Ghostbusters: Afterlife.”

We are just days away from finding out if lightning can strike twice as one of the most anticipated sequels in recent memory is poised to cover the world in ectoplasm all over again this Friday.

To celebrate the upcoming arrival of “Ghostbusters: Afterlife,” the surviving original Ghostbusters took over NBC late night on Tuesday, dropping by to visit both Jimmy Fallon on “The Tonight Show” and Seth Meyers on “Late Night.”

And if there was one thing we learned about their back-to-back appearances, it’s that Bill Murray did not like those proton packs they were forced to wear. He lamented them on both shows!

With Fallon, he compared them to vacuum cleaners, lamenting that they’d have to wear these things on their backs and then get down on the ground, get back up for hours and hours upon shooting.

“It’s very long days and a heavy thing. It’s not as heavy as the original one, but we’re weaker so it’s about the same,” he said.

By the time he got over to “Late Night,” the story had expanded and now they were carrying “small refrigerators” on their backs. Let’s just say, there was no shortage of classic Murray withering wit throughout these appearances.

When talking about the movie itself, he deadpanned, “Everyone who’s seen it has said that they cry at the movie, so it should be an extremely successful comedy.”

As Fallon pointed out, fans have been clamoring for the original Ghostbusters to reunite for a third film in the series since before the tragic passing of Harold Ramis. The franchise did ultimately continue with an all-female version, but it was controversially received to say the least.

So what brought them back after all these years? “Jason Reitman wrote a great script, so full of heart and going right back to the first two movies in it’s DNA and it’s heart and soul,” explained Dan Aykroyd, who co-wrote the original script with Ramis. “And we just read it and thought, you know, this is the right time and this is the right way to do it.”

Jason Reitman is the son of Ivan Reitman, who directed the original film, so there’s also that connection of family and “family” that is so much at the heart of the success of the original franchise.

When Fallon asked if the guys remembered Jason from the set of the original film, Murray didn’t hesitate, “He was a pain in the ass.”

Looking back at that experience, Aykroyd opened up about how the whole thing really started with his great grandfather, a man who was fascinated with supernatural forces. It was a combination of this and Aykroyd’s interest in old-style ’30s comedies that led to the genesis of what would become one of the biggest properties of all time.

He took note of this, saying that “no one knew what ectoplasm was before the Ghostbusters movie, right? Millions of people know what ectoplasm is now, and all over the country now, in every county, there’s a ghostbusting society with the equipment; they go out; there’s all kinds of shows of the paranormal, the supernatural, that’s all from my great grandfather’s work and the movie we all put together.”

Over on “Late Night,” they talked about how wild and loose they were filming the original film, for which they had very few permits. A lot of the scenes on the streets of New York were authentic, taking full advantage of the fact that New Yorkers just cannot be fazed.

“New Yorkers were so blase about us,” Aykroyd said, and that included driving around in the Ectomobile and running through the streets, or down the sidewalks, with that vacuum or refrigerator on their backs.

“To be able to be a true New Yorker and ignore stoplights everywhere you went, and in that vehicle, we all looked so legit in the damned thing,” Murray laughed. “And we had the refrigerator on our back; people just let you go.”

Aykroyd and Murray also reminisced about returning to 30 Rock for these interviews after their time on “Saturday Night Live,” with Aykroyd sharing the sweet story of how he first met Murray, and how Murray actually helped him acclimate to life in the United States. You can check out that story below.

And if it seems like there isn’t much Ernie Hudson content here, that’s because just like in the original film, Hudson was absolutely dominated by his comedic counterparts. Murray had Aykroyd up dancing for the crowd, and Aykroyd had all these stories and, as Hudson said with a smile, he was just happy to have landed a job back in the day.

And just like then, he was more than willing to graciously allow the hams he was starring alongside hog all the screentime. At one point, when Fallon pointed out that he was classically trained, Murray jumped in to quip, “What are you doing with us?”

From the looks of it, he’s having a good time … all over again.