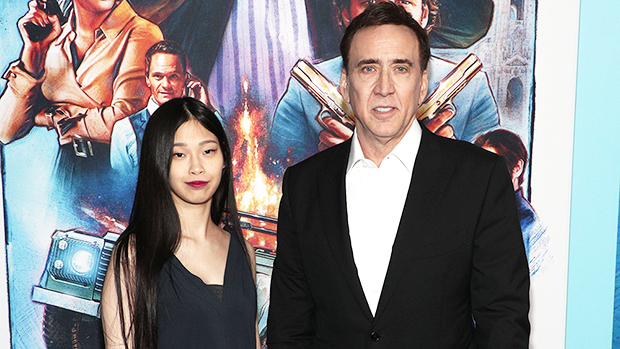 Nicolas Cage and Riko Shibata held hands as they arrived for a screening of the 58-year-old actor’s new movie The Unbearable Weight of Massive Talent on Monday April 18. Riko, 27, looked beautiful as she kept her baby bump covered in a flowing black dress, alongside her husband at the special showing in Los Angeles.

The black dress kept the baby bump hidden, as Nicolas and Riko posed for photos. Both the actor and his wife’s outfits were very simple. Other than the flowing dress, Riko sported a pair of black heels and wore red lipstick for the occasion. The National Treasure actor sported a black suit with a white shirt. Nicolas held her hand tight while they stood for photos on the red carpet.

Nic and Riko announced that she’s pregnant in January, and since the announcement, she’s naturally been his go-to date for a number of events. The pair got married in a Las Vegas ceremony in February 2021. The baby will be Nic’s third. He has two sons Weston, 31, with his ex-girlfriend Christina Fulton, as well as Kal-El, 16, with his ex-wife Alice Kim.

Nicolas Cage: Photos Of The Actor

Riko is Nic’s fifth wife. His ex-wives include Patricia Arquette, Lisa Marie Presley, Alice, and Erika Koike. The actor has reflected on his past, and he’s sure that Riko is the last woman that he’ll wed. “I’m really happily married. I know five is a lot, but I think I got it right this time,” he told The Los Angeles Times in a January interview. He also explained his “romantic” tendencies in a March interview with GQ. “It’s my expression of saying, ‘I love you. I want to spend the rest of my life with you.’ And this is it for me. I mean, this is not happening again. This is it. This is it,” he told the magazine.

Jennifer Grey’s Husband: All About her 20 Year Marriage To Clark Gregg & More Romances