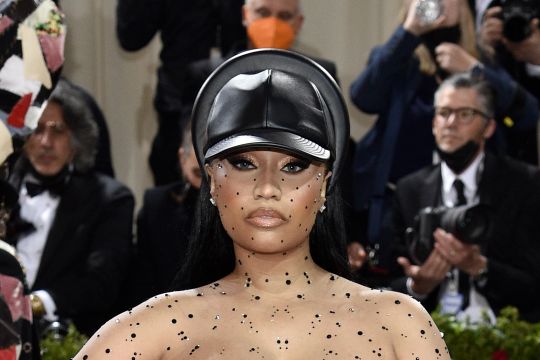 In a TikTok video posted on Essence’s own account, Minaj was filmed onstage during her headlining set at the Festival. For the occasion, the “Itty Bitty Piggy” singer wore a black cutout Saint Laurent catsuit, featuring a velvet texture and the brand’s metallic “YSL” lettering accents. The strapless one-piece was worn beneath a brown Fendace jacket, featuring its signature allover dark brown inverted Zucca — or, as many know it, “FF” — print, leather trim and a hot pink fur collar. Completing Minaj’s bold attire was a black choker and crystal-covered belt — and an equally bold vocal statement.

They don’t want it with tge Barbie! Nicki Minaj is the moment we’ve all waited for at #EssenceFest #blackjoy @tiktok

“All these girls, all these mini-me’s, wannabes,” the clip sees Minaj state into the microphone, before referencing her and Drake’s 2010 song “Up All Night” to cement her authority among other rappers: “I look like yes and you look like no.”

When it came to footwear, the “Whip It” singer’s shoes were not visible. However, it’s likely they consisted of a set of pointed-toe or combat boots, strappy sandals or sneakers — all of which Minaj has worn onstage in the past. However, Minaj’s shoes were seen in a teaser video on Instagram for her next festival gig: a headliner during London’s nine-day Wireless Festival this month.

In the clip, Minaj seemingly “breaks into” a museum with a crew dressed in all black. The musician herself carries a whip in a plunging black latex Catwoman-esque outfit a zipped front corset belt, silver ball stud and chain accents and cat-shaped mask — clearly inspired by Michelle Pfeiffer’s attire in the 1992 film “Batman Returns,” renowned as an iconic femme fatale role. However, upon being caught by police, Minaj mimics a statue pose on a column while wearing even more risqué attire: an ornate sparkling tiara, tan leather Mary-Jane strap pumps with stiletto heels, and nothing else.

When it comes to shoes, there’s no style Minaj hasn’t worn. The “Other Woman” actress’ recent pairs have included thong and ankle-wrap sandals by Bottega Veneta and Gianvito Rossi. Her off-duty looks regularly feature slides and chunky sandals from Off-White, as well as Louis Vuitton and Celine. Minaj is also a star on the fashion scene from her bold and colorful attire over the years, even commanding front row seats for brands like Balmain, Oscar de la Renta, Carolina Herrera and more. She also has collaborated on clothing lines and accessories with Fendi, H&M and Kmart over the years as well.

Click through the gallery to see Minaj’s best onstage looks over the years.