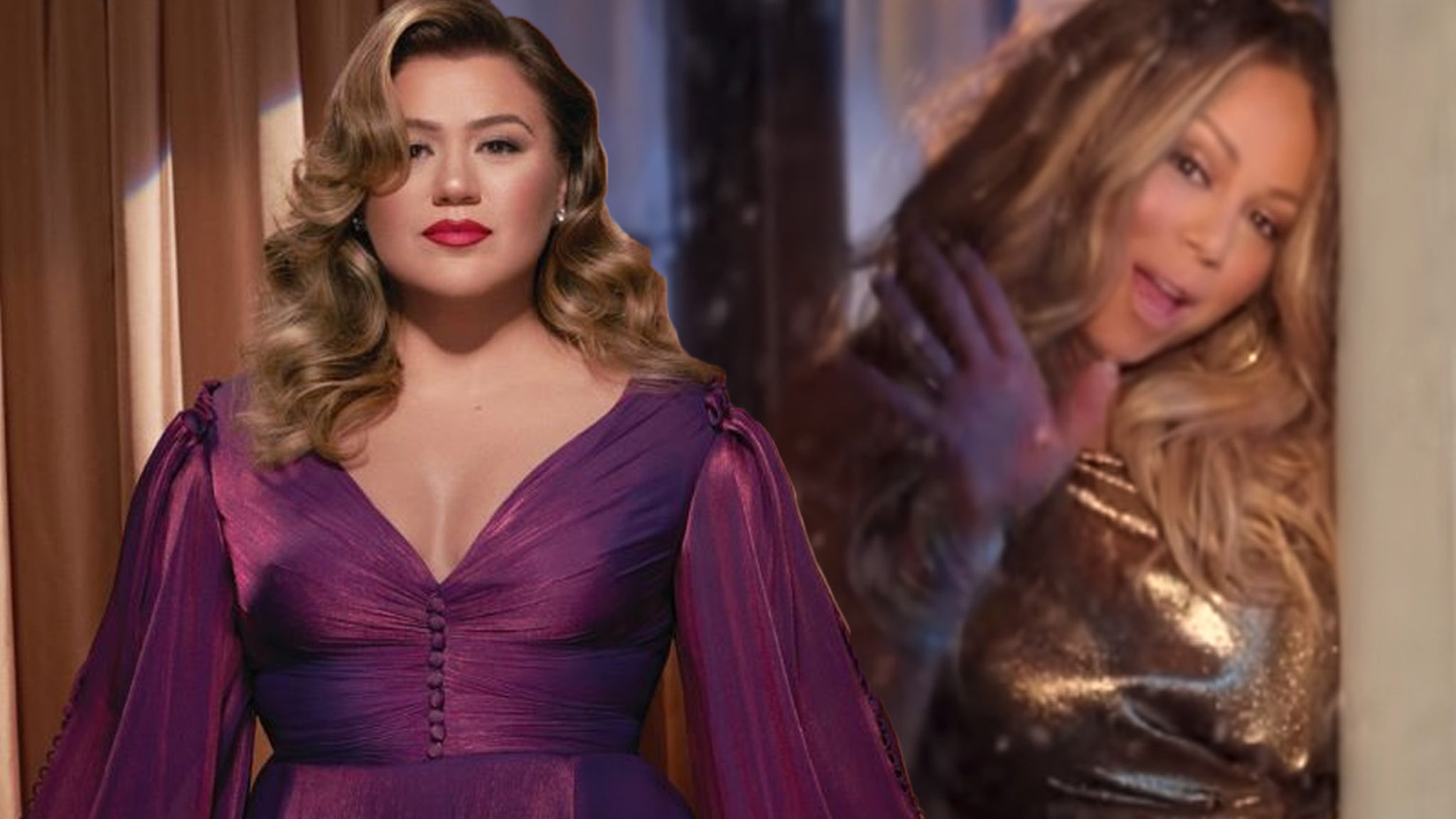 It’s officially time to turn on some festive tunes!

Thanksgiving weekend is here which means it’s finally socially acceptable to start playing holiday music. While listening to the same songs year after year works just fine, it might be time to add some new tunes to your Christmas playlist. Thankfully, a ton of artists have dropped their own festive songs just in time for the spirited season.

From Christmas queen Mariah Carey to Kristin Chenoweth and Brett Eldredge, these musicians have all come prepared with covers of the classics and even some new original tunes. No matter what, it’s guaranteed to leave you feeling festive.

Here’s what you should be listening to this season…

Kelly Clarkson teamed up with Ariana Grande for “Santa Can’t You Hear Me?” off of her new holiday album “When Christmas Comes Around…” The album also features collaborations with Chris Stapleton and Brett Eldredge.

“‘When Christmas Comes Around…’ captures how different the holidays can be for all of us during our lives, and I hope everyone can find something on the record they relate to. Hopefully the happier songs, but if not, hey…you’re not alone!” Kelly wrote on Twitter.

2. Kristin Chenoweth – “Why Couldn’t It Be Christmas!”

Kristen Chenoweth just dropped her new Christmas album “HAPPINESS…is Christmas!” which includes several original songs as well as holiday favorites. She says her purpose behind the album was to uplift everyone after a difficult time.

“The inspiration for this album was light. Light at the end of the tunnel. It’s been a difficult time for all. With the cover and some of the songs, light is a big theme. I wanted to make a Christmas album for everybody,” Kristin said in a statement.

Brett Eldredge dropped “Mr. Christmas” as the first single off of his new holiday album of the same name. In addition to the original, the release also features holiday classics like “It’s the Most Wonderful Time of the Year” and “Santa Claus Is Coming to Town.”

“I really think some of the last of the magic left in this world is in Christmas music. There’s a lot of joy in this record — even more than the first in some ways — and I wanted to tip a hat to where I started…but also take it to the soulful side of my music,” Brett said in a statement.

John Legend is bringing the holiday cheer in “You Deserve It All,” celebrating the spirit of gift-giving out of gratitude to the most special people in our lives. He even wrote the song alongside Christmas lover Meghan Trainor.

Meghan Trainor, who’s known for her obsession with Christmas, just released a deluxe version of her 2020 holiday album “A Very Trainor Christmas” in honor of her son Riley’s first time celebrating the special occasion. The album includes several new songs, including “Christmas Coupon.”

“It’s Riley’s first Christmas so naturally I had to add a few more tunes for this special season,” Meghan wrote on Instagram.

Reigning queen of Christmas Mariah Carey joined forces with Khalid and Kirk Franklin for their new holiday jam “Fall in Love at Christmas.” And not only did the trio collab on the song, they’ll also be performing it on Mariah’s AppleTV+ holiday event, “Mariah Carey’s Magical Christmas Special.”

“I hope you like it, I’m obsessed with it. Don’t think it’s over before you listen to the outro,” Mariah said in a promo video.

Sia gave her fans an early Christmas present by way of her new song “Santa Visits Everyone” off of the deluxe version of her holiday album “Everyday is Christmas.” The re-release also features another original titled “Pin Drop” and a slowed down remix of “Snowman.”

As part of the special version of her Christmas album “My Gift,” Carrie Underwood included several news songs including “Favorite Time Of The Year,” which was previously an Amazon exclusive. She also added her quirky holiday single “Stretchy Pants” as well as a recorded version performance of “Let There Be Peace / Something in the Water” from “My Gift: A Christmas Special.”

There’s no doubt that Pentatonix love the holiday season and their brand new Christmas album “Evergreen” includes some holiday favorites and great collaborations. The group teamed up with Alessia Cara for a performance of classic “Frosty The Snowman” as well as a version of “Over The River” with Lindsey Stirling.

“honoured to have sung ‘frosty the snowman’ with @ptxofficial for their new Christmas album ‘evergreen’ 🎄⛄️ tis the seasonnnn,” Alessia wrote on Instagram.

As part of Norah Jones’ first ever holiday album “I Dream of Christmas,” the singer released a combination of original songs and holiday classics. The first single, “Christmas Calling (Jolly Jones),” is all about looking for that special someone for the holiday.

“I’ve always loved Christmas music but never had the inclination to make a holiday album until now. Last year I found myself listening to James Brown’s ‘Funky Christmas’ and ‘Elvis’s Christmas Album’ on Sundays during lockdown for a sense of comfort. In January 2021, I started thinking about making a Christmas album of my own. It gave me something fun to work on and look forward to,” Norah said in a press release.

Rob Thomas makes his first foray into holiday music with his new album “Something About Christmas Time,” which features his single “Small Town Christmas.” He says he was inspired to do it by the fact that he always ends up playing Christmas tunes for friends and family and wanted his own album to share.

“The covers are songs I grew up with. It was about taking a season that means something to me and making a Christmas record that was littered with my DNA. I wanted to feel as connected to these songs as I would any other record I put out, rather than just release some collection of Christmas songs,” he told Variety.

Country trio Pistol Annies, made up of Miranda Lambert, Ashley Monroe and Angaleena Presley, dropped “Hell Of A Holiday” as part of their new Christmas album of the same name. The song pokes fun at how the Christmas spirit takes over before people can even celebrate Halloween — and sets the mood for the rest of the album.

“We couldn’t be happier we got to make a Christmas album. Once we finally surrendered and let the Christmas songwriting spirit take over, we were so inspired and felt that magic on every single one of these songs. We hope to be a part of so many people’s Christmas memories for years to come,” the group said in a statement.

Darren Criss is celebrating the holidays this year with his own Christmas album, which of course makes a play on his last name. “A Very Darren Crissmas” includes originals like “Christmas Dance” as well as some unexpected covers like “I Want a Hippopotamus for Christmas.”

“You know how every year around the holidays, you say to yourself, wow, I can’t believe they’re here already. That’s how I feel about this album coming out…I can’t believe I actually made one and that it’s out already. It only took all year to get here. I hope it keeps your holidays warm & bright.. if not maybe just a liiitle bit warmer & brighter than the other holiday albums coming out this season,” Darren wrote on Instagram.

Contemporary Christian artist Chris Tomlin wanted to remind fans of the true meaning of Christmas with his third holiday album “Emmanuel: Christmas Songs of Worship.” He collaborated with many of his musical friends for the collection of songs that includes “Emmanuel – God With Us.”

“Oftentimes we find ourselves lost in the hustle and bustle of the Christmas season…focused on gifts and travel and everything else, but what I love about Christmas music is that it stops us and reminds us of the true reason for the season, the birth of our Savior. That is why I love writing and recording Christmas worship songs and I am so grateful to release my third Christmas album…My hope and prayer is that these songs help remind people that Christmas is truly God’s great surprise to the world,” Chris said.

In preparation for the Christmas season, Carly Pearce dropped her own cover of “Mary, Did You Know?” And not only does she have new music for the holidays, but she’ll also be hosting CMA Country Christmas alongside Gabby Barrett.

“Christmas came early y’all! This will forever be one of my favorite Christmas songs. I had so much fun creating my own version,” Carly wrote on Twitter.