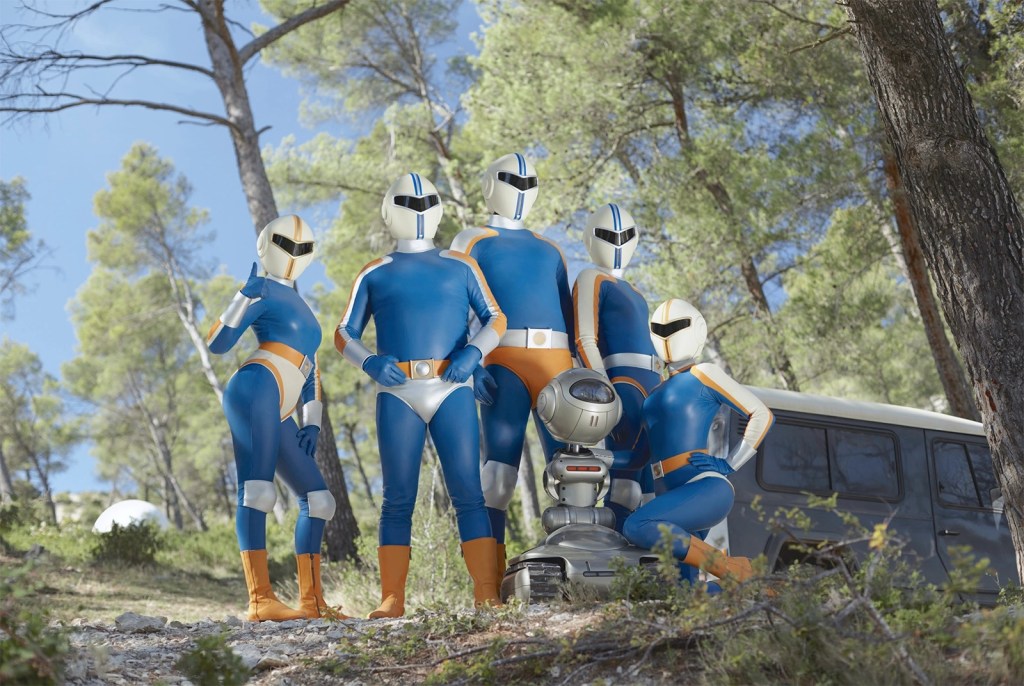 Absurdist director Quentin Dupieux is back with another bat sh*t crazy film, Smoking Causes Coughing (Fumer Fait Tousser). This film centers around a group of vigilante superheroes called the Tobacco Force. Through all the madness of his, like Rubber (a serial killing car tire), Deer Skin (where a guy hears his Deer Skin jacket speaks to him), or Mandibles (a film about a giant fly), there is always a hidden message under the surface. This time around, he’s addressing cigarettes, smokers, and stress. I mean, stress can cause smoking, and smoking can cause coughing. Makes sense to me. *shrug*

In their tight blue leotards and white helmets, the Tobacco Force is kicking ass and taking names to save the world. Most of all, they hate smoking. At the film’s beginning, the group is in a fierce battle with a giant foam turtle. The five members are Benzene (Gilles Lellouche), Nicotine (Anaïs Demoustier), Methanol (Vincent Lacoste), Mercury (Jean-Pascal Zadi), Ammonia (Oulaya Amamra), which are all the chemicals present in cigarettes. With their powers combined, they give the form turtle cancer. And when it’s overloaded with Cancer, it explodes in a blubbery mess of blood and guts.

Their giant foam rat leader that looks like Master Splinter and constantly drooling, Chef Didier, gives them another assignment. This time, they must take on the dangerous Lizardin (Benoît Poelvoorde), who intends to destroy the world. But because Mercury had problems during the last battle, the rat boss believes the team needs to go on a retreat to build solidarity and morale.

From this point, the film turns to allegory to prove its point. As the Tobacco Force sits around the campfire, Benzene tells the story about thinking helmet and what happens when someone is left alone with their own destructive thoughts. The second story is told by a fish the group caught in a nearby lake. As they begin to cook the fish, it relays a story about stress causes a lack of clarity and how that can cause situations to go awry.

Smoking Causes Coughing is a parody within a parody that has its origins in comedy and Super Sentai television shows (like the Power Rangers or VR Troopers) of the 80s and 90s. It has his signature style of subplots, actor cameos, and comedy that makes for a fun midnight feature. It’s a welcomed break from the heavy-handed cinema that tends to exist at Cannes. Dupieux’s stories know how to take extreme violence and turn them into sarcasm and comedy, often using inanimate objects to reflect humanity’s shortcomings.

Is Smoking Causes Coughing his best work? No, but the message here seems sincere in that sometimes things happen, and we find ways to decompress, and sometimes those methods may cause coughing.