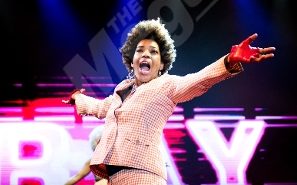 The US version of the Eurovision Song Contest has secured some big-name contestants, with Michael Bolton, Macy Gray, Jewel and Sisqó all confirmed to be competing in the inaugural competition, which launches this month.

Each musician will represent their home state, with Bolton stepping up for Connecticut, Gray for Ohio, Jewel for Alaska and Sisqó for Maryland.

These artists will be competing against amateur performers, some brand new names and rising stars, including former Glee performer Riker Lynch and dance act The Crystal Method.

In total, there are 56 acts representing all 50 US states, five US territories and the nation’s capital. The winner of the Contest’s Best Original Song will be decided by audience vote, with the grand final to air live on NBC on Monday 9 May – during the same week of the main European competition.

The Contest is an official spin-off from the Eurovision Song Contest and will feature multiple stages, with three qualifying rounds before the semi-finals.

The arrival of the show is a dream come true for executive producer Ben Silverman. He said in a statement: “I’ve spent 20 years trying to pursue this. I just love the format.”

He added: “When America is more fractionalised than ever and we are dealing with so many issues that divide us, the one [thing] that truly unites us is our culture.”

Last weekend saw the European Broadcasting Authority, which manages the official competition, confirm its decision to ban Russia from this year’s competition. The Content, which is officially apolitical on paper, nevertheless has served as something of a litmus paper for geo-political relations in the six decades it has been running.

Traditionally, the Scandinavian countries tend to vote highly for one another, Cyprus and Greece invariably give each other maximum 12 points while leaving Turkey out in the cold, everybody loves Ireland, and the UK’s fortunes are pretty mixed, with recent years seeing a huge decline in their final position compared with previous decades.