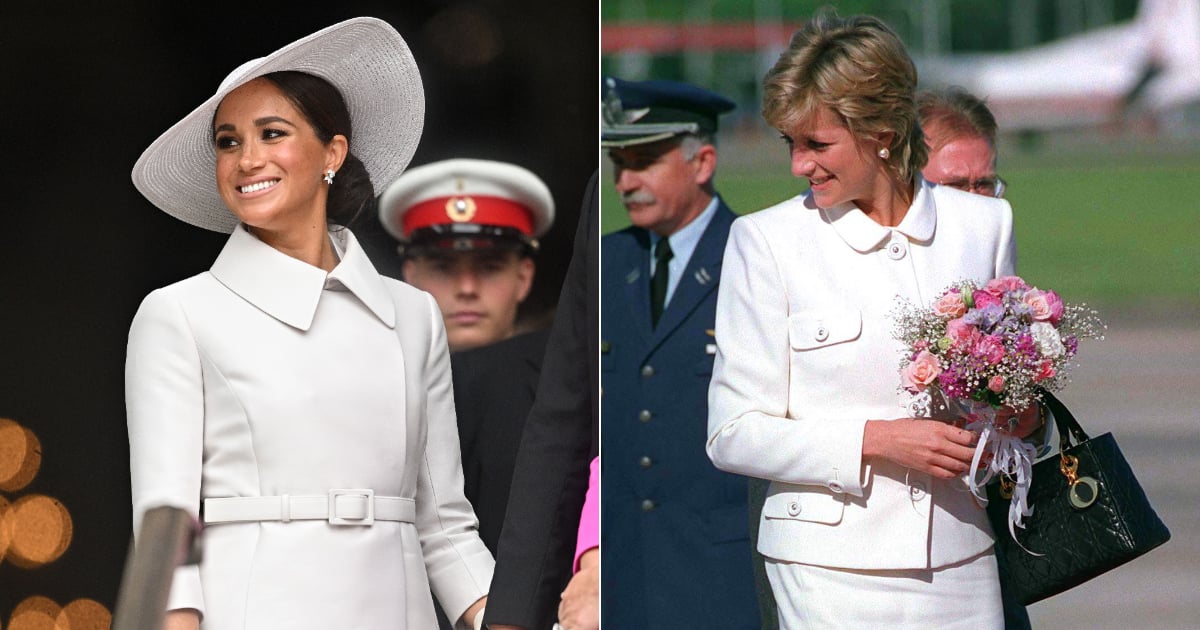 Meghan Markle‘s return to London has so far been marked by stylish appearances and sentimental nods to Princess Diana. Back in town for the Platinum Jubilee festivities, the Duchess of Sussex continues to turn heads at every event. A day after channeling the Princess of Wales in a sophisticated off-the-shoulder navy dress at Trooping the Colour, Markle delivered another royal style moment when she attended the National Service of Thanksgiving with her husband, Prince Harry. She arrived at St. Paul’s Cathedral in an all-white Dior Haute Couture ensemble, consisting primarily of a belted coat dress.

Markle’s look is perhaps another subtle tribute to Princess Diana, who wore all white for several events. Most notably, she chose a monochrome suit much like Markle’s for an appearance at Buenos Aires Airport in Argentina. On that occasion, Diana put her affinity for Dior on full display, carrying the Lady Dior bag. Indeed, the Princess of Wales famously heralded that handbag as a must-have accessory in the ’90s, and she owned multiple slip dresses designed by John Galliano for Dior. Following in Princess Diana’s footsteps, Markle wore several pieces from the fashion house for her latest appearance, including short gloves, a wide-brim hat by Stephen Jones for Dior, and a pair of white satin Dior pumps. Her hair was styled in a sleek bun, allowing full view of her diamond earrings and soft glam makeup.

Next to her, Prince Harry looked just as stately in a suit decorated with medals from his military service. The duo exuded elegance as they took part in another ceremony celebrating Queen Elizabeth II’s 70th year on the throne. The Duke and Duchess of Cambridge, Prince William and Kate Middleton, were also in attendance, clad in a black suit with ornamental medals and a soft-yellow midi dress and wide-brim hat, respectively.

Ahead, see what the British royals wore to the National Service of Thanksgiving.