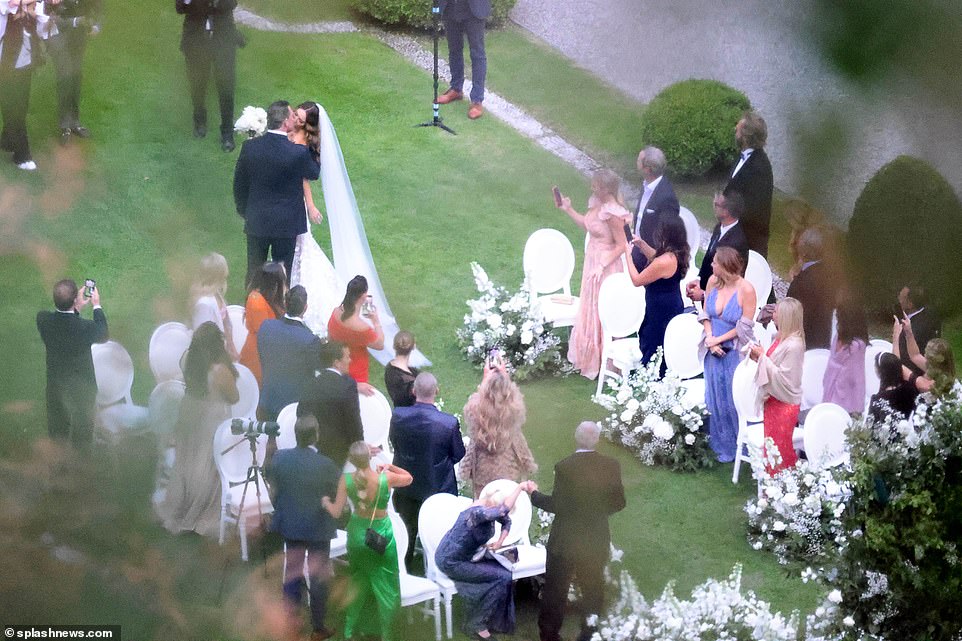 Jim Edmonds officially tied the knot with Kortnie O’Connor in a lavish and elegant affair in Lake Como, Italy on Sunday just over a year after their engagement.

The bride, 37, and groom, 52, were pictured sharing a passionate kiss after saying ‘I do’ in front of an intimate audience of friends and family.

Photos also captured Kortnie walking down the aisle on her own in an exquisite white lace wedding dress with a flowing veil cascading towards the gown.

She carried a beautiful bouquet of white roses before meeting her future husband at the end of the aisle, which was elaborately decorated with an array of white florals.

Jim was looking smart and sharp in a black tuxedo and white rose tucked into his front pocket.

Once Kortnie met her husband at the end of the aisle, the couple held hands as they prepared to solidify their union.

After the ceremony, the newlyweds walked down the aisle together as guests snapped photos of the blissful couple. 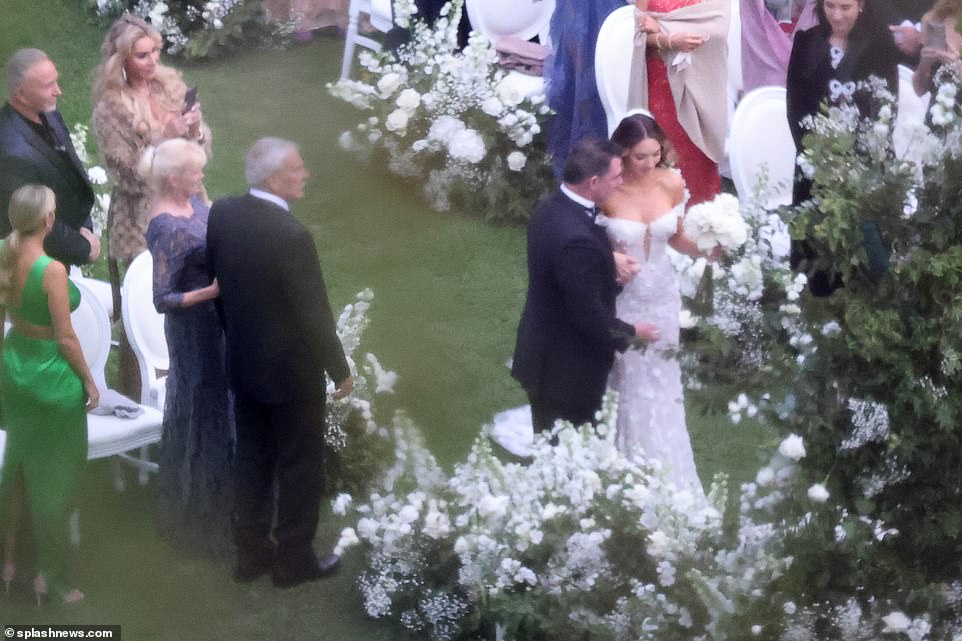 Do you take this woman? The couple held hands as the ceremony began 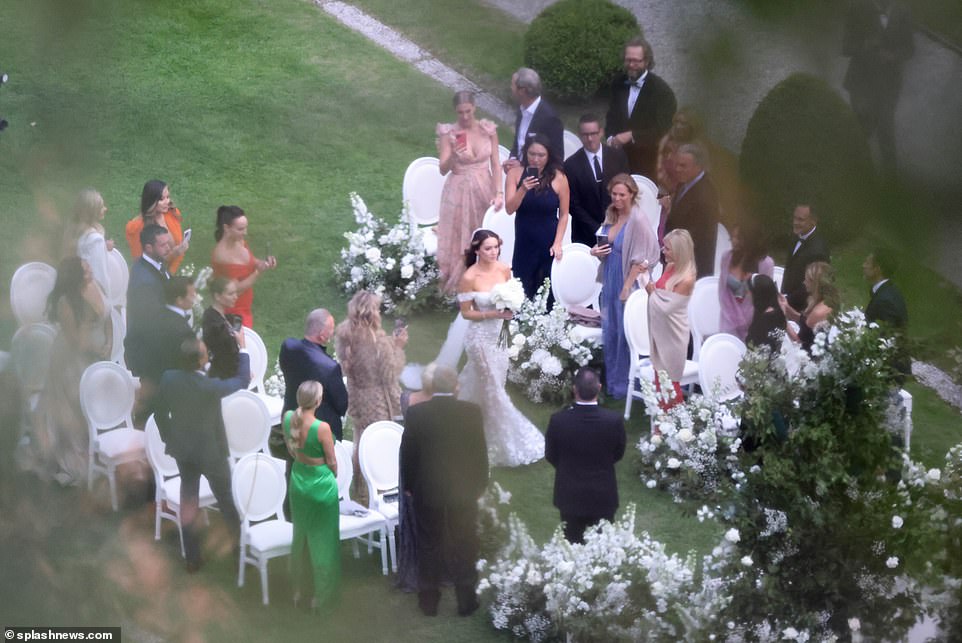 Here comes the bride! Friends and family watched the stunning bride walk down the aisle on her own and with a bouquet of white roses in hand 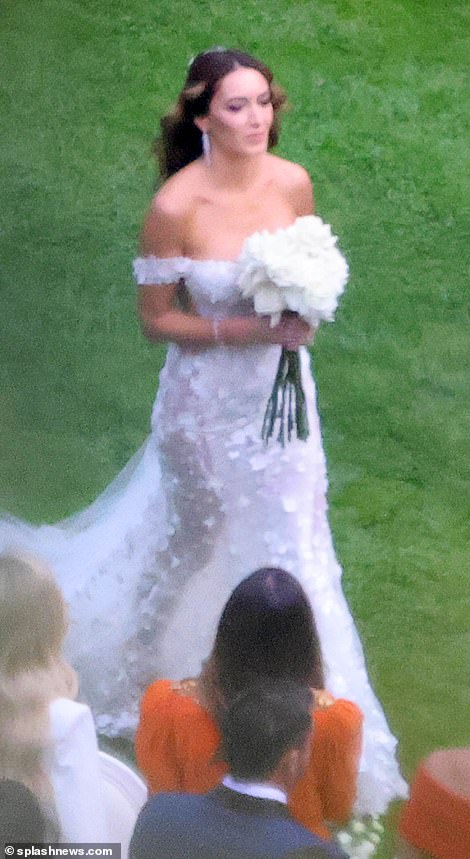 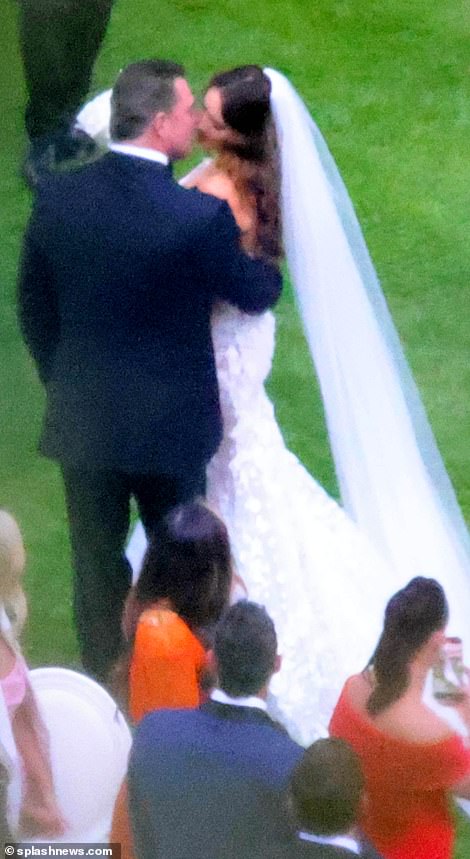 Blushing bride: O’Connor looked gorgeous in a white lace wedding dress and veil which tumbled to the ground

The newlyweds were then whisked off on a boat where they took romantic post-wedding photos.

The lovebirds could barely keep their hands off each other as they put on an amorous display aboard the boat.

Kortnie kicked her bare legs into the air as Jim showered her with kisses.

They were also pictured lovingly gazing at one another and with Kortnie tenderly wrapping an arm around her new husband. 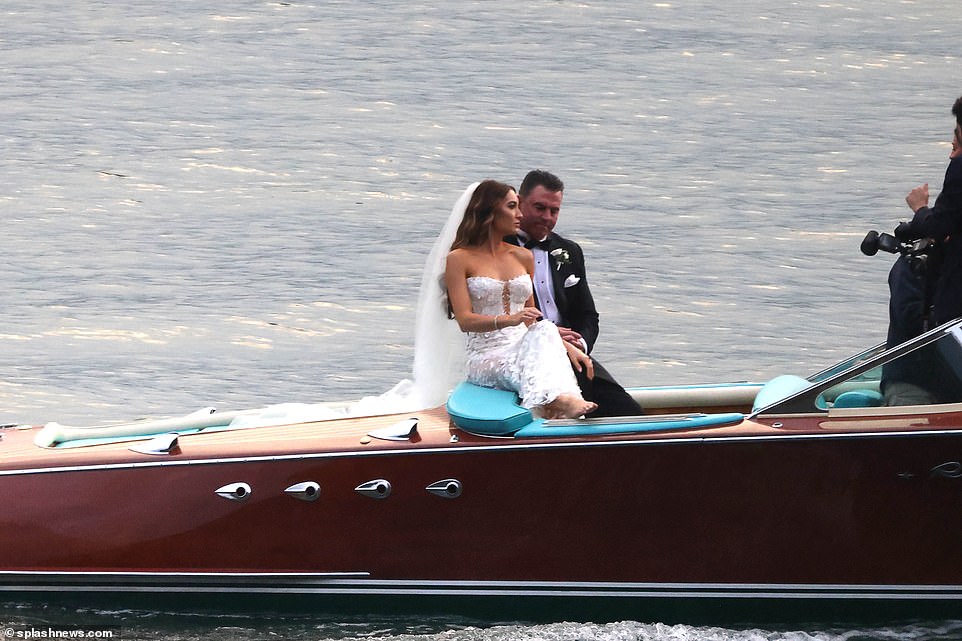 Mr. and Mrs: The couple followed up their ceremony with a photo shoot on boat 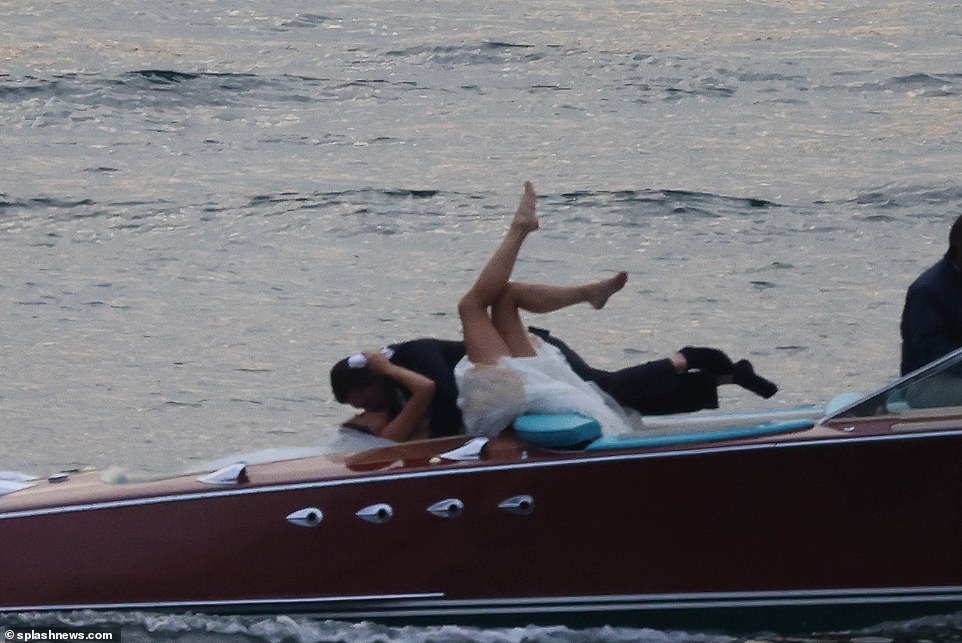 Passionate love: The newlyweds made out as Kortnie kicked her bare legs into the air 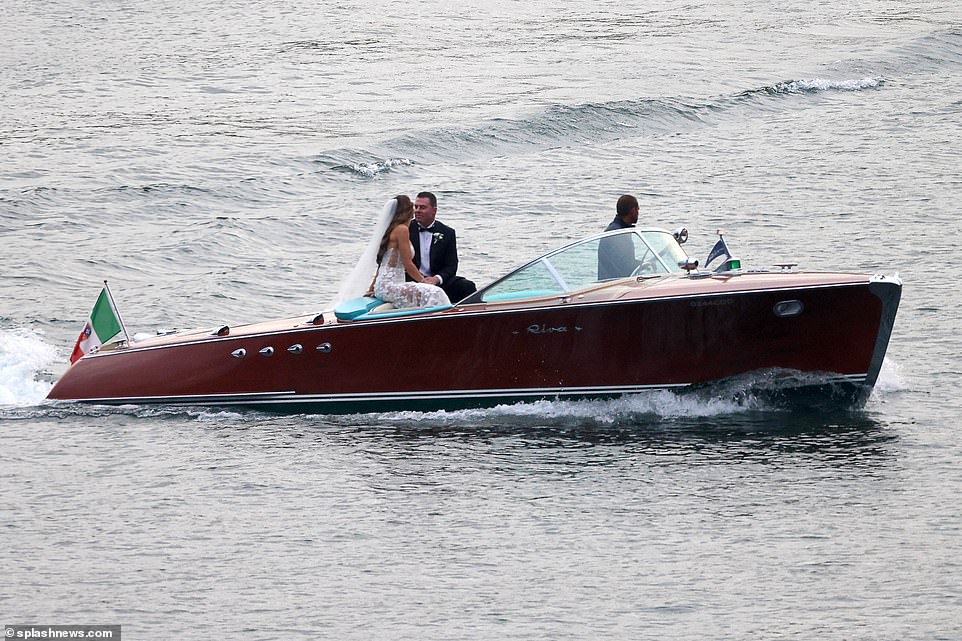 The look of love: The newlyweds shared a tender gaze 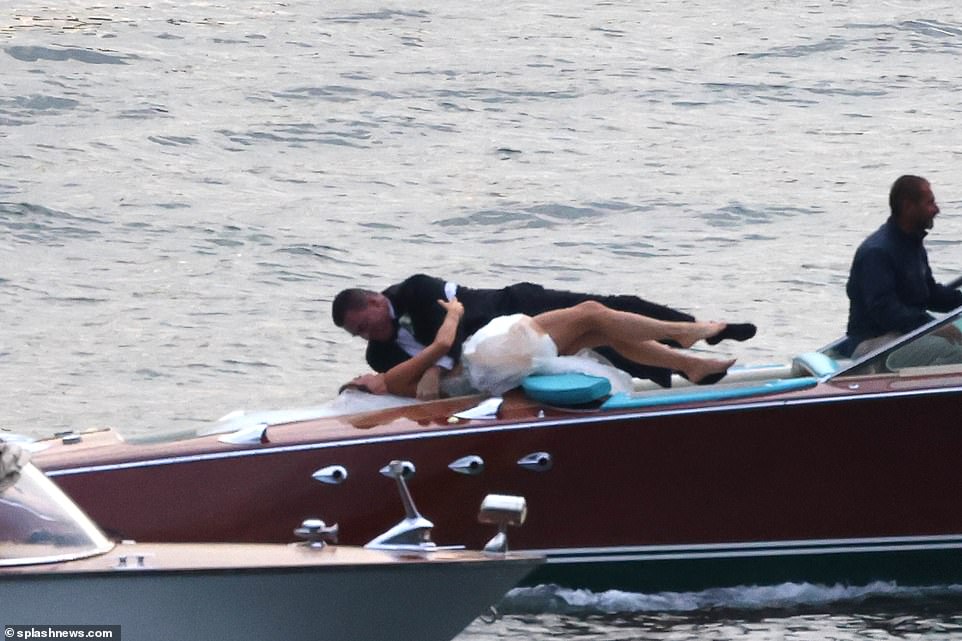 Before the ceremony, the couple kicked off the festivities with a James Bond themed boat ride on Saturday.

Kortnie looked breathtaking in a metallic dress which hugged her slender physique while Jim commanded attention in a smart white blazer and black trousers.

He carried Kortnie’s quilted white purse, a small bottle of Champagne, and another garment over his arm as he followed his bride-to-be with an umbrella in hand.

Kortnie hiked up a bit of her dress as she descended the stairs in her strappy white heels. 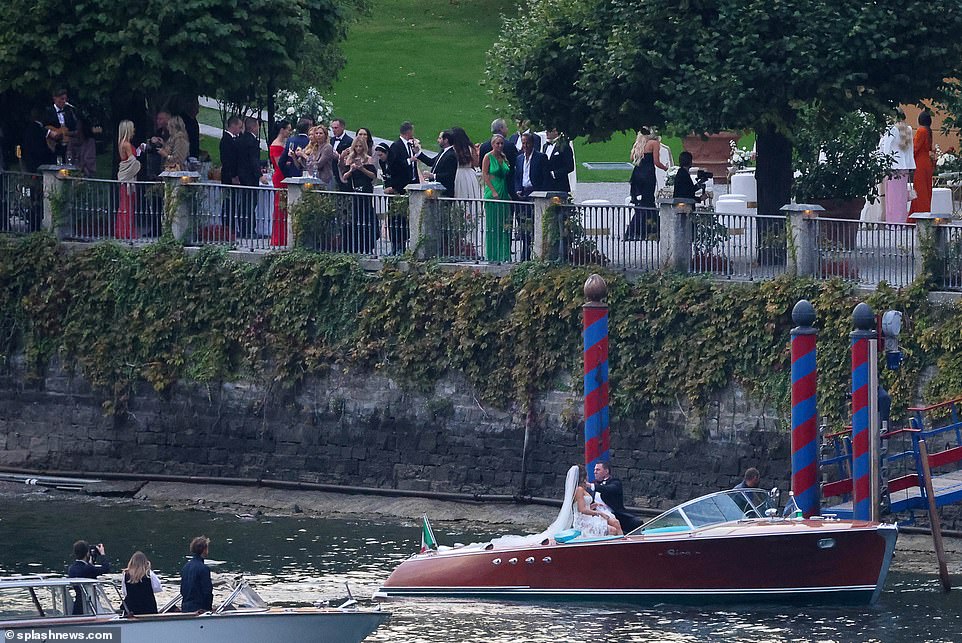 Doting husband: Jim reached for his bride as they cruised by their elegantly dressed up guests 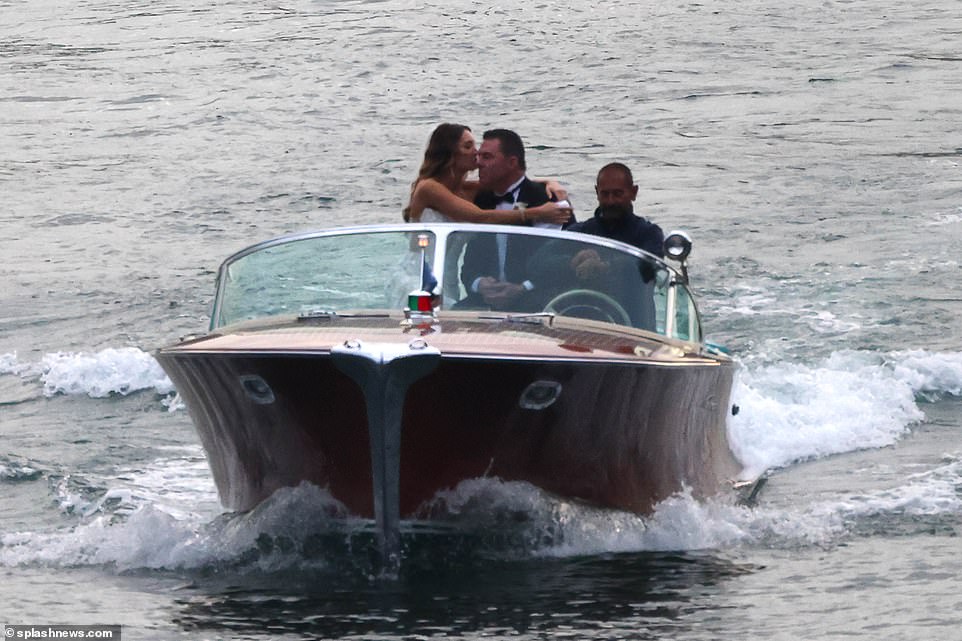 Smooch! Kortnie appeared to be kissing her new husband on the side of his head 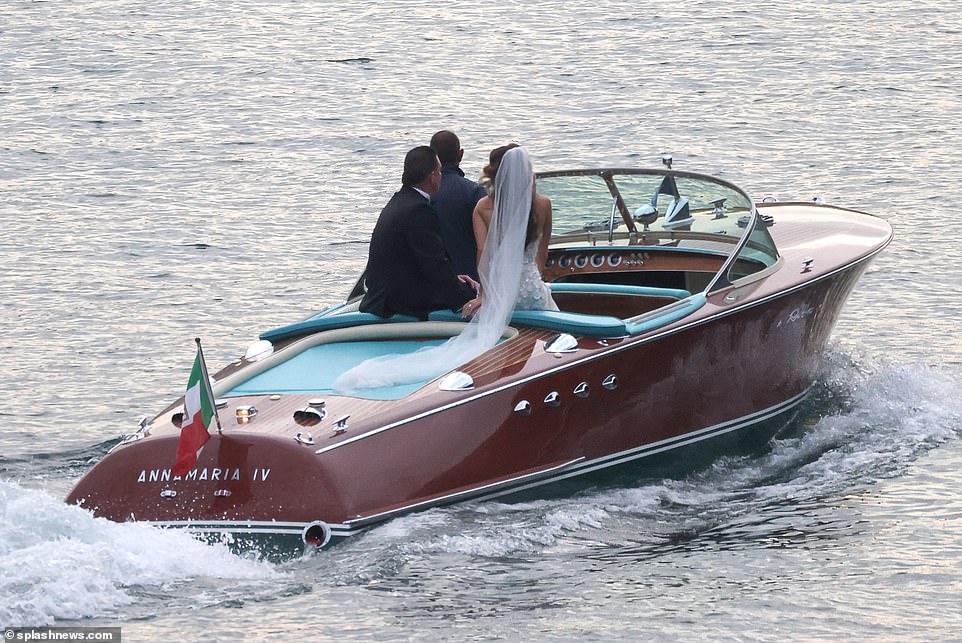 Off they go into the sunset! The lovebirds enjoyed a romantic boat ride after their evening nuptials 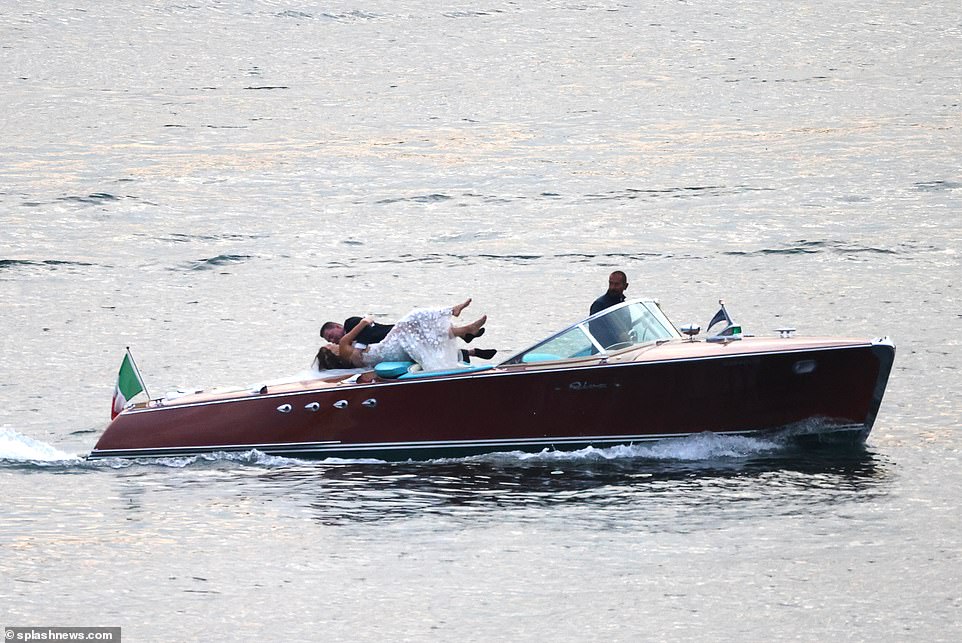 All over her! The couple could hardly keep their hands off one another

An assistant trailed Kortnie with an umbrella and notepad in hand.

Kortnie and Jim exchanged vows in front of 32 guests, according to People. The ceremony took place at the Giardino del Mosaico, a 19th-century villa at Villa D’Este.

Guests watch the couple exchange written vows before sunset at 5:30PM, according to People.

‘This was truly a dream wedding in a beautiful location surrounded by some of the most important people in our lives,’ the bride told the outlet. ‘It was more than I could have ever imagined.’ 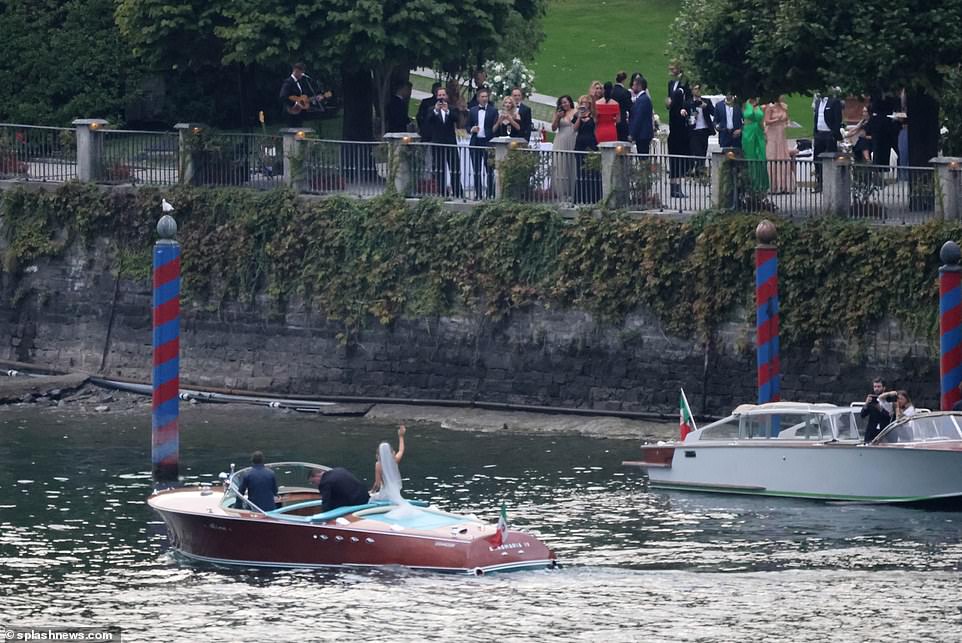 Hello! The bride waved to her guests as they snapped photos of the newlyweds 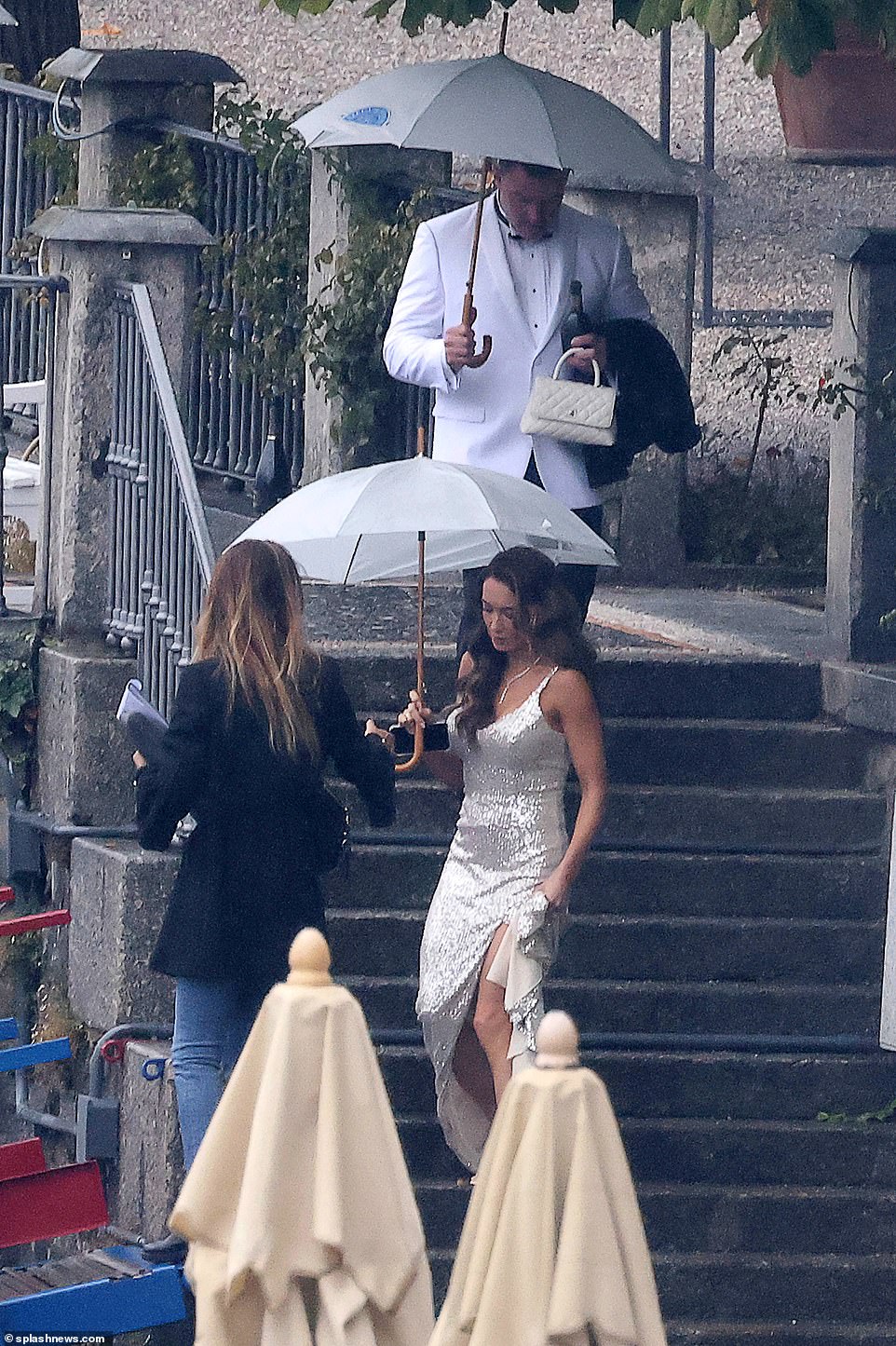 Mysterious love: On Saturday, the couple kicked off the festivities with a James Bond themed boat ride

Looking sharp! Jim wore a white blazer while his lady love dazzled in a metallic dress

‘The best part of the wedding is I now get to spend the rest of my life with Kortnie,’ her new husband said. ‘For the first time in my life, I finally understand true happiness.’

After the ceremony, the newlyweds celebrated with loved ones inside the Colonne Room, a majestic hall containing marble floors and crystal chandeliers.

The menu featured classic Italian food, a pasta course, entree, and dessert. As for their wedding cake, the couple cut into a four-tier cake decked out with an exquisite arrangement of white roses.

This marks the fourth time Jim has tied the knot – he was first married to LeAnn Horton, with whom he shares daughters Hayley and Lauren. They remained friendly after their split, and she heartbreakingly later died of colon cancer in 2015. 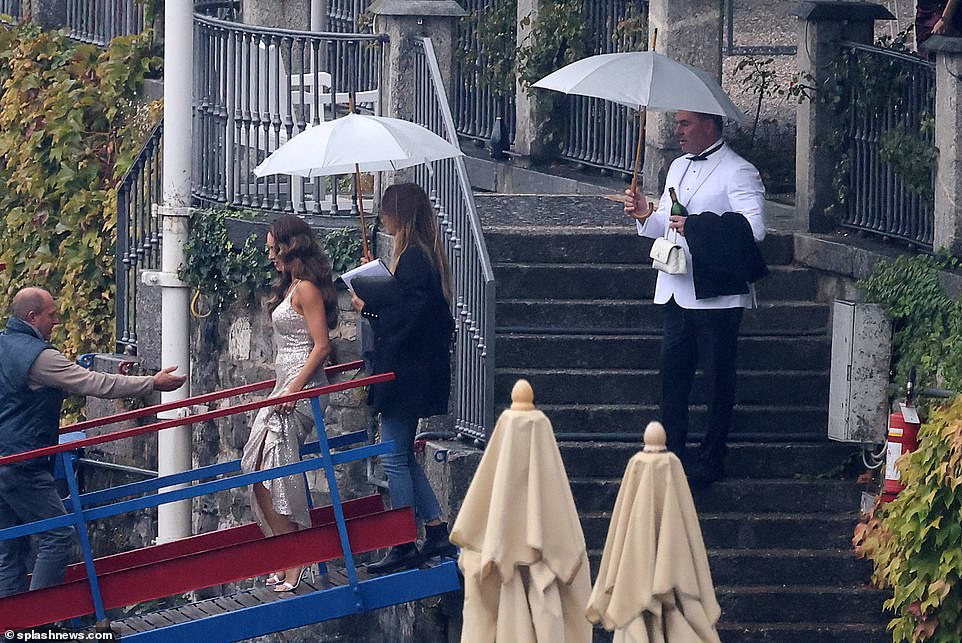 Helping hand: An assistant shielded Kortnie from the rain with an umbrella as she prepared to board the boat 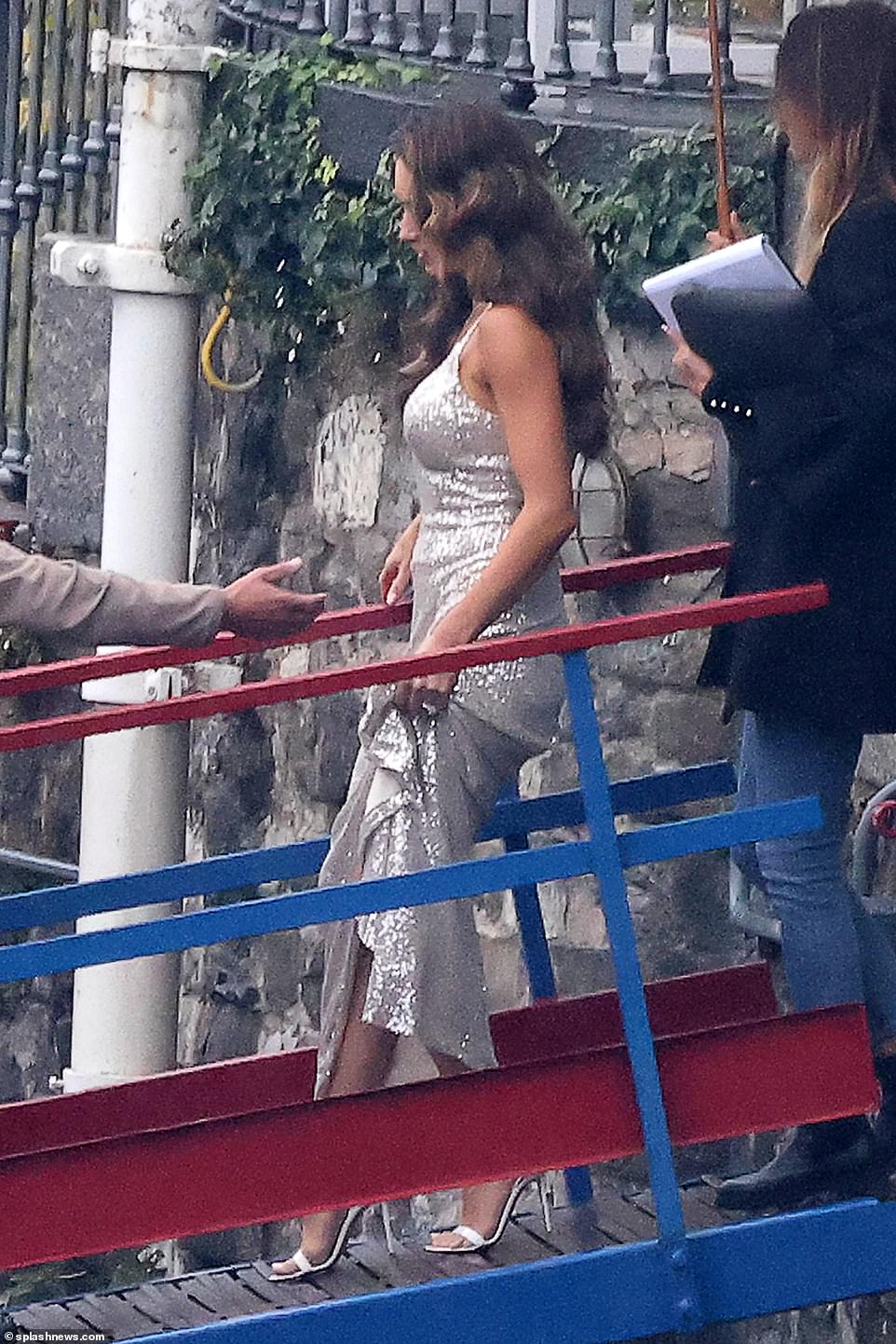 Dream come true: ‘This was truly a dream wedding in a beautiful location surrounded by some of the most important people in our lives,’ the bride told the outlet. ‘It was more than I could have ever imagined’ 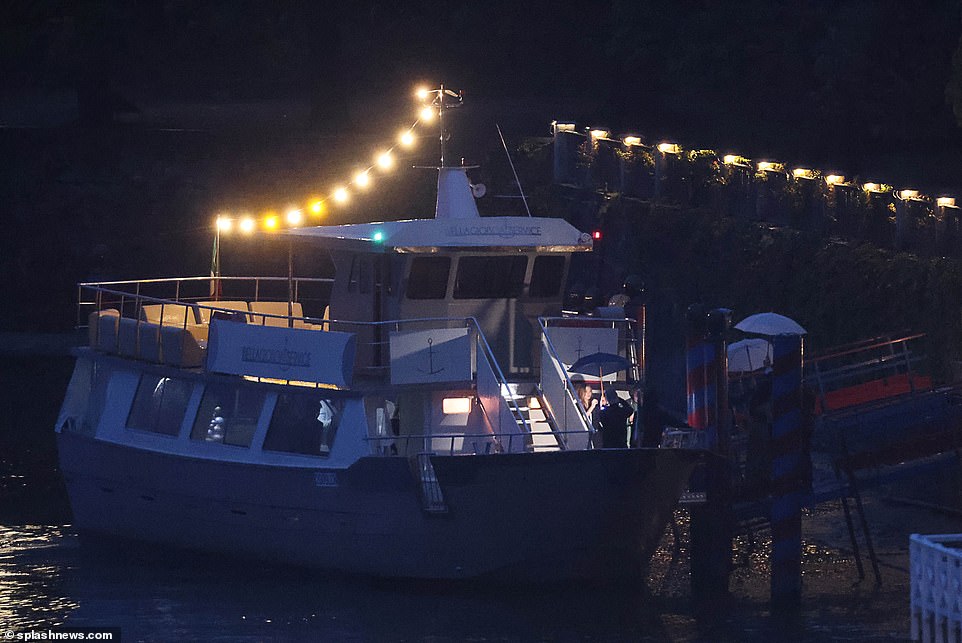 All aboard the love boat! The newlyweds commemorated their love with the James Bond themed boat ride

In 2008, the athlete walked down the aisle with Allison Jayne Raski, whom he shares two more children with, his son Landon and daughter Sutton.

The marriage marks the first time Kortnie, who became Instagram official with Jim back in April 2020, has tied the knot.

Kortnie announced their engagement in August 2021 with a photo of her massive diamond ring.

‘Dear Diary, A month ago, Jimmy asked me to marry him in the most intimate and personal way,’ she began her caption. ‘I said yes! Love, Kortnie.’ 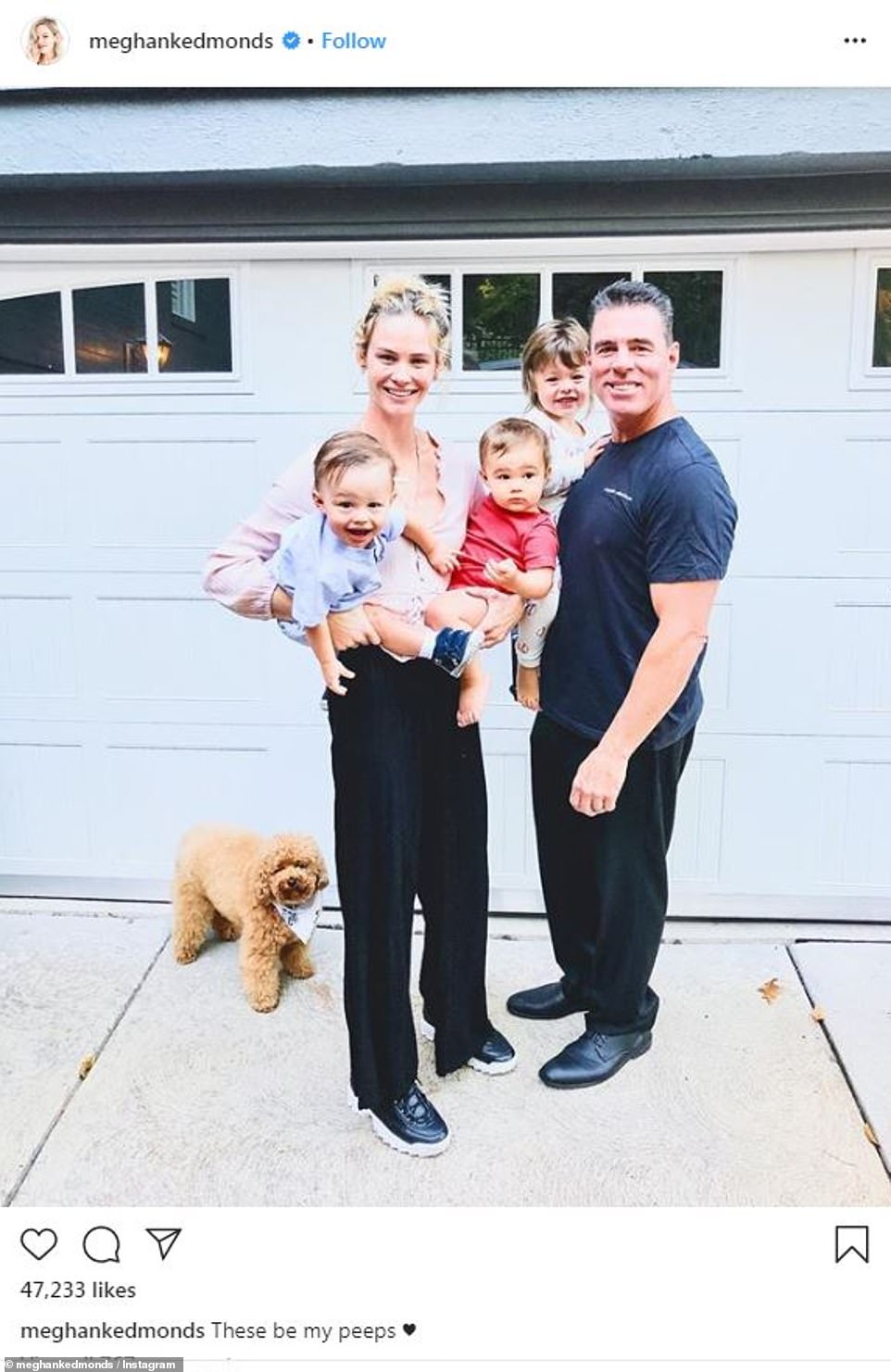 Past life: Edmonds was previously married to reality star Meghan King Edmonds and shares three children with her 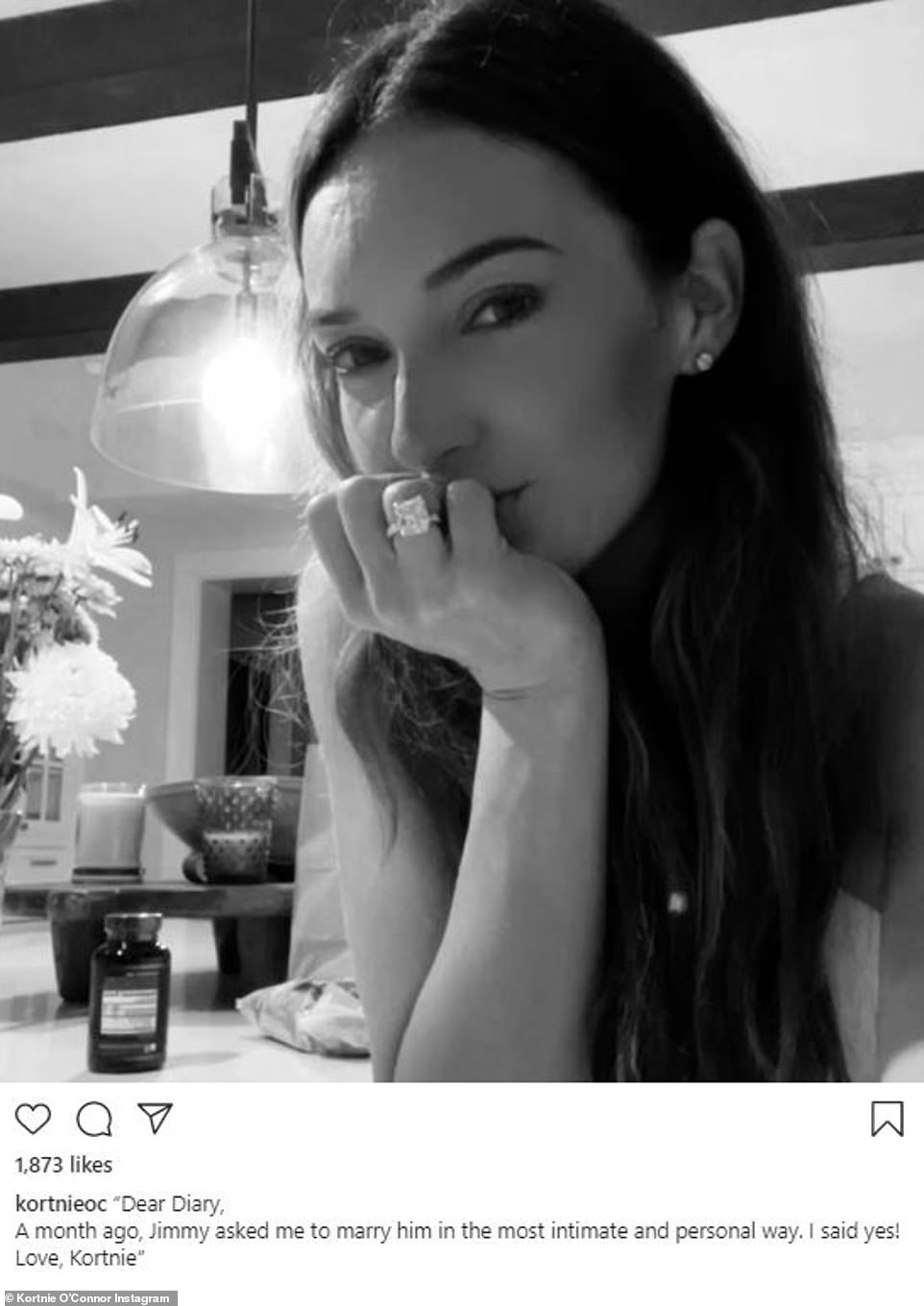 ‘I said yes!’ Kortnie announced their engagement in August 2021 with a photo of her massive diamond ring