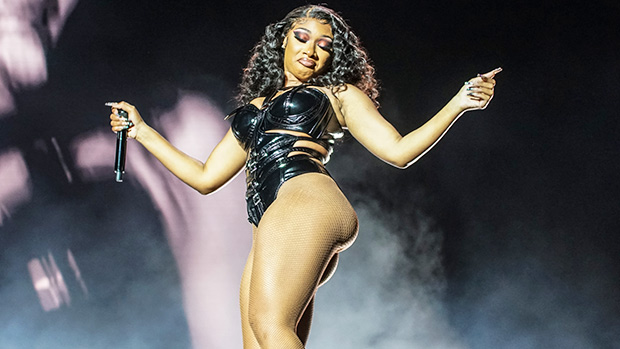 It’s Hulk Girl Summer! The latest superhuman law division case in episode 3 of She-Hulk: Attorney At Law comes from Dennis Bukowski, who has been defrauded by an ex-girlfriend. Dennis truly thought he had been dating the Megan Thee Stallion. In reality, she was just a shapeshifting light elf from New Asgard.

The case goes to trial with Pug as the lead attorney. Jennifer Walters, a.k.a She-Hulk, ends up testifying for Dennis and gets the chance to call him “delusional” in court. Dennis wins his suit against the light elf. Megan Thee Stallion actually shows up to court wearing a light pink blazer and matching skirt. “That’s right. there’s only one Megan Thee Stallion,” she says as she cools herself off with a portable fan.

Megan Thee Stallion pops up again in a post-credits scene with She-Hulk. Megan is one of She-Hulk’s new clients and has her sign new documents at the office.

After the work is done, it’s time for some fun. Megan and She-Hulk begin dancing and twerking to Megan’s hit song “Body.” Megan tells She-Hulk, “Oh, you are way more fun than my last lawyer.”

In the heat of the moment, She-Hulk declares, “I will kill for you, Megan Thee Stallion.” Megan holds up her hand and says, “Dial it back.”

The rapper confirmed her role in the Marvel series to The Cut just days before episode 3 premiered on September 1. She also recently appeared in the STARZ series P-Valley and has a role in the upcoming musical comedy F**king Identical Twins.

Megan Thee Stallion & Tory Lanez: What to Know About Their Relationship & Alleged Shooting

Megan revealed in her interview that she would like to continue acting and has one particular role in mind: Gabrielle Union’s character in a Bring It On reboot. “I always have wanted to be Isis. I would be perfect for that. If they were ever to make a new Bring It On, I should be that character,” she told the outlet.