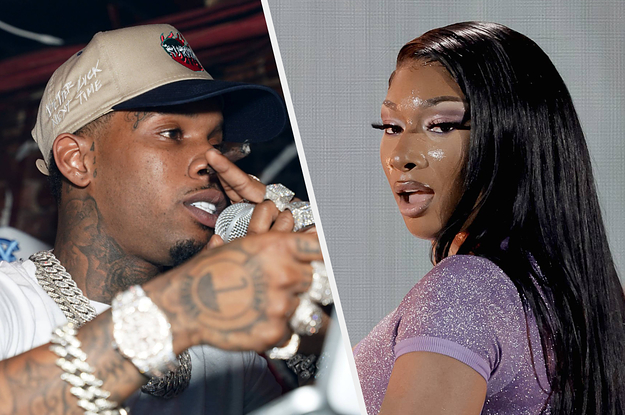 In her testimony on Tuesday, Megan said she turned her head when walking away from the car to see Lanez’s arm over the open window when he shot at her. She recalled hearing screaming, she said, and she fell to the ground and tried to crawl into the driveway.

Megan said she was only wearing a bikini and had gunshot wounds in both her feet when police arrived and told her to walk to them for questioning with her hands up. Initially, she told police she had stepped on glass — a lie she said she told because of her fear of police brutality, just weeks after then–Minneapolis police officer Derek Chauvin murdered George Floyd.

“I didn’t feel safe in the car. I knew I just had got shot but I don’t feel safe with police either,” Megan said. “I didn’t want to see anybody die,” she added.

Defense attorneys for Lanez have so far focused on the lie she told at the scene and questioned the credibility of her testimony and other statements. They said she also lied when she said she didn’t have a sexual relationship with Lanez while speaking with CBS’s Gayle King. As the defense questioned her on Tuesday, they also tried to draw attention to the logistics of the alleged shooting, including how Lanez could fire a gun at her while he was inside the car.

Megan explained repeatedly that Lanez was partially inside and outside the car after she exited, and she then turned her head back to see him yell, “Dance, bitch” at her before he opened fire.

Prosecutors showed the court footage of her in the ambulance, handcuffed to a gurney, in the moments after they said she was shot. Megan, still on the stand, appeared to become emotional, blowing her nose into a tissue.

She said she never saw Kelsey Nicole, then her personal assistant and friend, holding the gun. Prosecutors said Monday that Lanez and Nicole tested positive for gunshot residue, the chemicals released when a gun is fired.

Outside the Clara Shortridge Foltz Criminal Justice Center in downtown Los Angeles on Tuesday, people turned out to support Megan and Lanez.