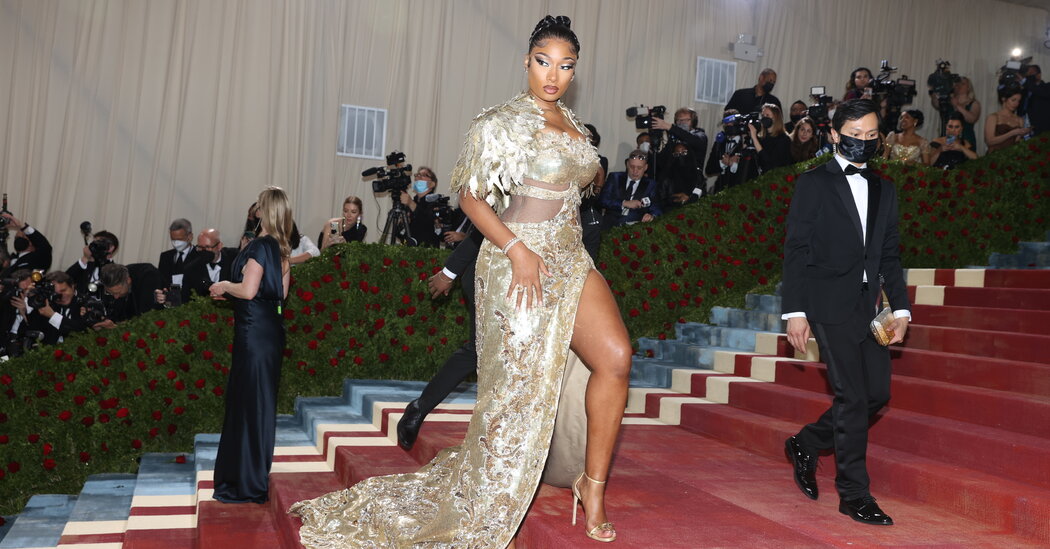 “I love gold,” Megan Thee Stallion said on Saturday night, sitting in a makeup chair somewhere in Memphis, getting ready for a festival performance — a good thing, too, considering that 48 hours later, in New York, the rapper would attend her second Met Gala drenched in the stuff.

When she arrived at the Met on Monday, gold slid down her body in sequins and beads. It clung to her curves except where revealing cutouts swooped along her ribs, waist and thighs. Strapless with a train, the gown was designed by Jeremy Scott, the creative director of Moschino.

Weeks ago, when Megan Thee Stallion first spoke to Mr. Scott about her desired look, she told him: “I want skin and I want gold and I just want it to be sexy. The one thing I really, really, really, really want is my moment on the stairs.”

That moment has become a Met Gala tradition — and de facto competition — pioneered in the last decade by showstopping guests like Beyoncé (starting in 2012, with a fluffy purple Givenchy train), and Rihanna (who in 2015 rode in a special stretch limo that could accommodate her 16-foot fur-trimmed yellow train). Last fall, more than two dozen guests arrived with trains cascading down the steps.

Megan Thee Stallion’s train this year? “Heavy as hell,” she said. But otherwise, the rapper chose not to stray far from her signature, form-fitting, bombshell style. At the last Met Gala, she called her Old Hollywood-inspired look “Megan Monroe.”

Jeremy Scott said he became friendly with Megan Thee Stallion after she wrote an op-ed for The New York Times in 2020 about speaking up for Black women. The essay left Mr. Scott in tears, and he sent flowers and a note.

“Meg was very, very attuned to her image and how she looks and how she wants to look,” he said about planning for the gala.

The rapper’s gown was inspired by the intricate flourishes and carved moldings of an old-money, Gilded Age mansion, said Mr. Scott, who wanted to combine “all her hottiness with a bit of haughtiness as well.” Her cape is made of pieces of gold leather, laser-cut to look like feathers.

“I just see her as a queen, and I wanted her to have this kind of mysticism,” he said. “It’s neither ‘Game of Thrones’ nor Queen Elizabeth, but capturing a note within this kind of regalness nevertheless.”