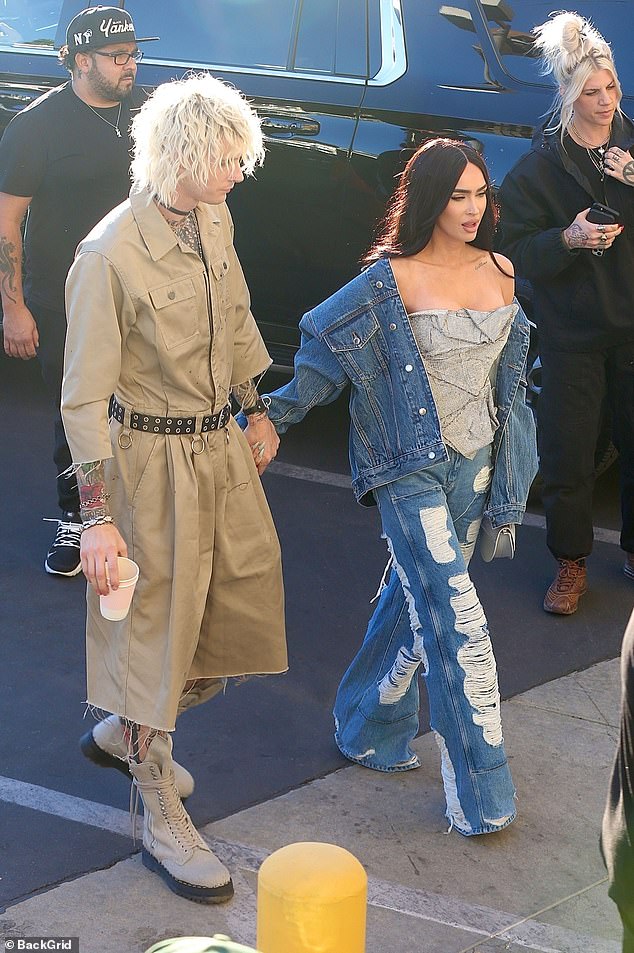 Megan Fox and her fiancé Machine Gun Kelly couldn’t hide their affection as they arrived at a taping of Jimmy Kimmel Live on Wednesday afternoon.

The 36-year-old actress, who dressed as Pamela Anderson at a music festival just days earlier, held hands with the 32-year-old rapper-turned-rocker as they headed into the studio in Hollywood.

Megan opted for some rugged double denim, though her severely distressed flared jeans looked as if they weren’t long for this world.

She matched the shredded jeans with a crisper blue denim jacket, which she wore pulled down below her shoulders.

The Transformers star completed her ensemble with a striking folded gray tube top, as well as a white handbag.

The brunette beauty wore her long, pin-straight hair parted down the middle as it cascaded down her back.

Her love MGK (real name: Colson Baker) wore an intriguing tan jump suit with frayed sleeves and baggy pant legs that were short at his knees. 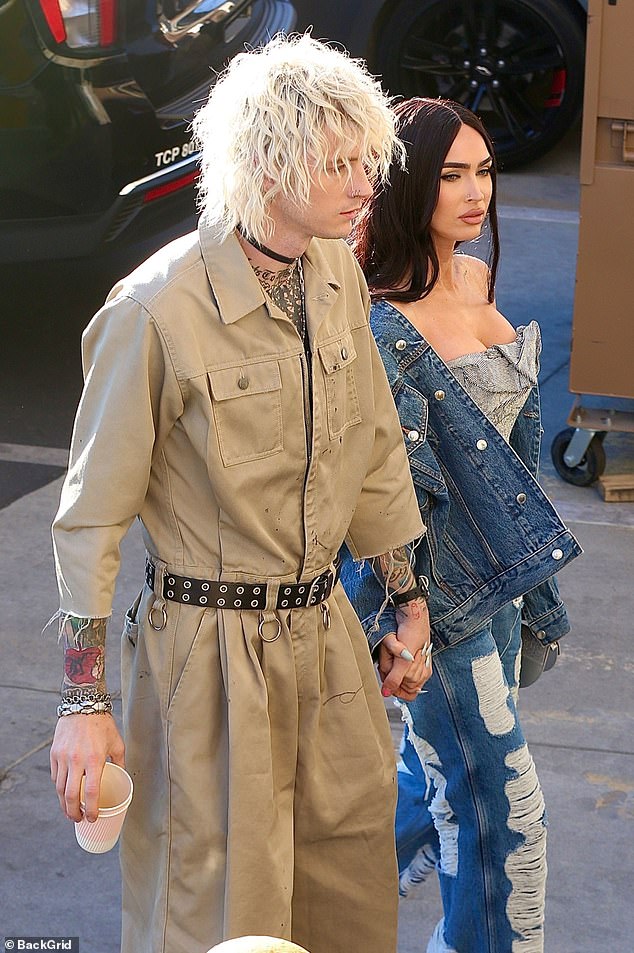 Fashion stars: She wore her outfit with a folded gray tube top, while MGK rocked a cropped tan jumpsuit

The musician and occasional actor tightened the baggy look with a black belt, and he rocked a set of beige boots while sporting scraggly bleached blond hair.

Machine Gun Kelly was the one who was set to chat with Jimmy, while Megan was apparently just there for moral support.

Both sported some nail polish, with MGK showing off a bit of coral-colored varnish while clasping Megan’s hand, which featured long powder blue nails.

Earlier this month, the lovebirds and nail polish connoisseurs revealed that they had collaborated on a new nail polish collection.

Megan described one of the green metallic colors — which matched her emerald engagement ring from MGK — in the collection, as her favorite, telling Allure: ‘It has a strong sexual energy that helps me feel aligned with my heart and my truest desires.’

The collection is now available to shop on the brand’s website, and consists of five shades, which shoppers can get by purchasing the Play With Fire Kit for $90. 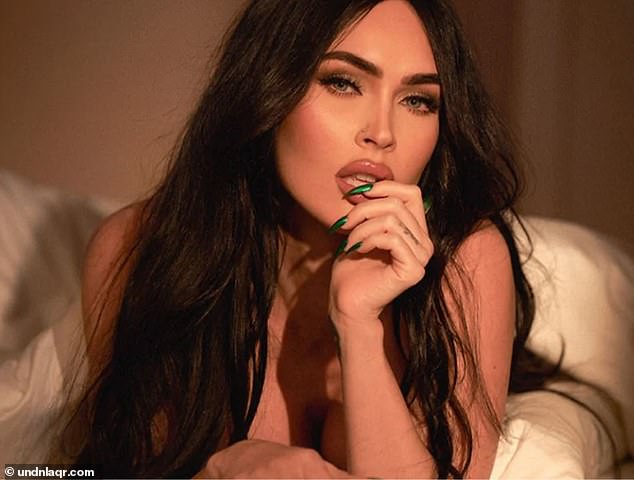 Collaboration: Megan and MGK shared details earlier this month about their new nail polish collection for his polish line UN/DN LAQR, which they promoted with sizzling new snaps

‘Sexual energy’: Fox told told Allure of the green metallic color: ‘It has a strong sexual energy that helps me feel aligned with my heart and my truest desires’ 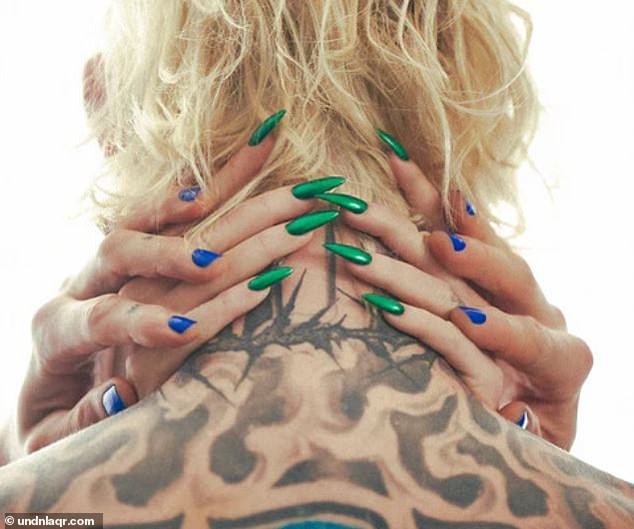 Nail art: The duo were seen in promotional images from the brand’s site showing off the sexy green hue on Megan’s fingers in a variety of images

Potential buyers also have the option of purchasing the Big Bang Set for $56, which includes three shades: Past Life, Deep Breath and Brutal Honesty.

The duo were seen in promotional images from the site showing off the sexy green hue on Megan’s fingers in a variety of sizzling snaps.

In one, the actress was seen laying down on her tummy, while seductively grazing her lips with her fingers.

Another alluring photo saw her holding MGK’s neck from behind, with the green color contrasting against his skin. 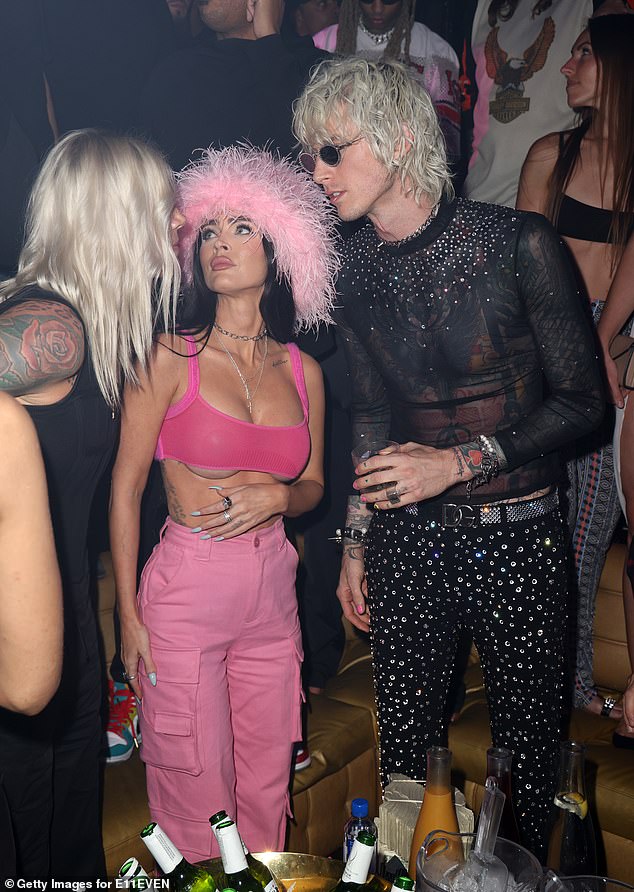 Turning heads: Megan was dressed like Pamela Anderson when she supported her fiancé at the E11EVEN festival in Miami on December 4

Megan and Machine Gun Kelly met on the set of the low-budget thriller Midnight In The Switchgrass in March 2020, though it was quickly shut down at the start of the coronavirus pandemic. They were linked later in May of that year.

In January of this year, Megan announced the two had gotten engaged earlier in the month via a video she posted to Instagram.

The Transformers star noted in her post that she and MGK ‘drank each other’s blood’ to celebrate their engagement, which took place outside the Spa Botánico at the Ritz-Carlton Dorado Beach in Puerto Rico.