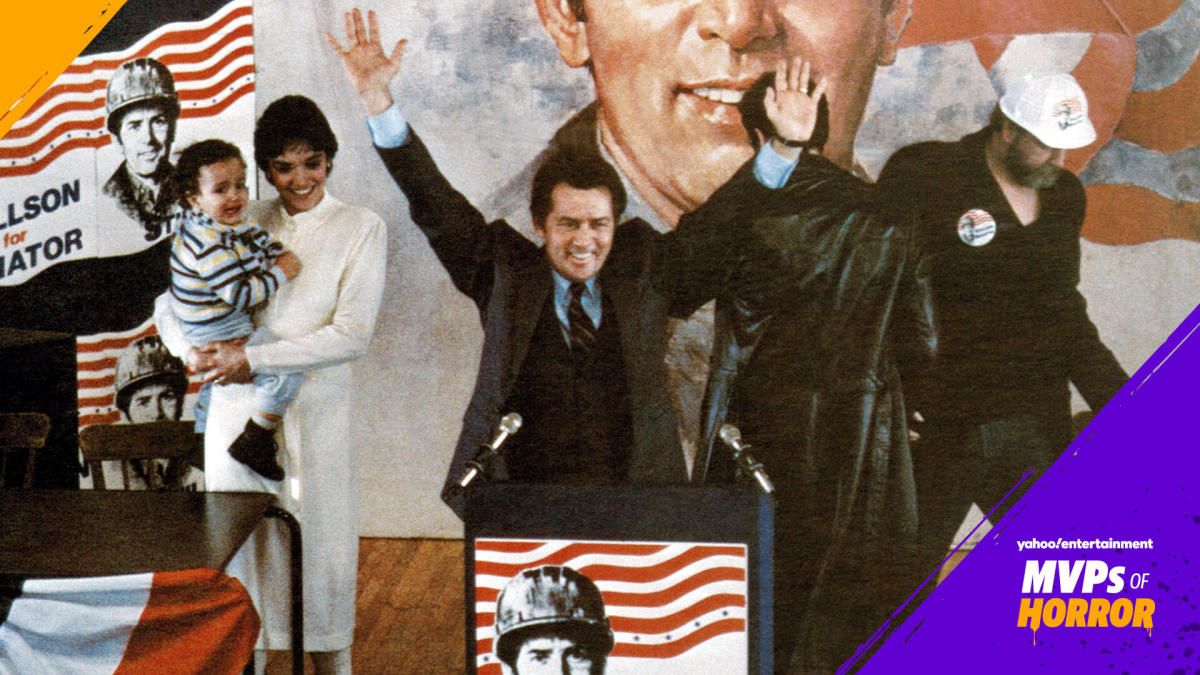 You might say that David Cronenberg and Martin Sheen saw the future. In 1983, the director of cult-horror hits like Scanners and the star of Badlands and Apocalypse Now teamed up for The Dead Zone, an acclaimed adaptation of Stephen King’s bestselling chiller. Both the book and the movie follow Johnny Smith (played onscreen by Christopher Walken), a schoolteacher who awakens from a car accident-induced coma with the power — or is that curse? — of clairvoyance. As Johnny comes to terms with these abilities, he watches the rise of Sheen’s outsider presidential candidate, Greg Stillson, whose promise to make America great again masks the reality of a darker tomorrow should he ascend to the Oval Office.

Sound familiar? It certainly does to Cronenberg. “It was a character invented by Stephen King, of course, but it turned to be very George W. Bush-like and then even more like Donald Trump as it turns out,” the Canadian auteur tells Yahoo Entertainment with a laugh. “Unfortunately, you invent monsters and they come to life. So I say, it’s Stephen’s fault. I’m gonna blame him for Bush and Trump!” (Watch our video interview above.)

It’s worth noting, of course, that The Dead Zone was written and filmed against the backdrop of Ronald Reagan’s successful White House bid. A well-known activist for progressive causes, Sheen says he didn’t vote for the former California governor at the time and wasn’t impressed by his administration. “He had a great heart, but I don’t think he was a great president,” Sheen observes now. That said, he suggests that Stillson — who Johnny foresees bringing about a nuclear holocaust straight out of The Day After — bears more resemblance to politicians that came later than to Reagan himself.

“I didn’t have to stretch very far,” he says of how he got into character. “I mean, we’ve had some of those lunatics reach very high levels in public life and public service that have given us second thoughts. But playing that screwball was actually a lot of fun. I didn’t realize the effect it could have on a lot of people, maybe for the better when they realize, ‘If you get into high public office, you’re carrying some pretty important responsibility, and you’d better be a responsible person.’ Didn’t we just learn that from a recent occupant of the highest office in the land.”

Unlike Trump, Stillson never achieves the presidency thanks to Johnny’s intervention. Infiltrating one of the candidate’s rallies, he plans to assassinate the future world-destroyer, but his first shot goes wide. Stillson then finds the nearest human shield — a young boy — and in an act of ultimate cowardice holds him aloft as a press photographer snaps a damning picture that single-handedly ends his campaign. “In the movie, the man that took the photograph was my son, Ramon [Estevez],” Sheen reveals. “He was that kid with the camera on the scene and snapped the photograph that led to Stillson’s demise. So keep an eye on your kids!”

Funnily enough, that scene has often been invoked when discussing Trump’s own litany of campaign trail scandals, including the notorious Access Hollywood tape that ultimately didn’t impede his road to the White House. For the record, King himself as noted the similarities between The Dead Zone and Donald Trump over the years.

“I was sort of convinced that it was possible that a politician would arise who was so outside the mainstream and so willing to say anything that he would capture the imaginations of the American people,” the author remarked in a 2019 interview with Now This News. “My worry at the time that I wrote The Dead Zone was that somebody like Greg Stillson might actually get elected, and rise through the ranks, become President of the United States and start World War III. Had I really known the future, I could have had Greg say, ‘Well, I’ve got a button and it’s bigger than your button!'”

“I know that American voters have always had a real attraction to outsiders with the same kind of right-wing ‘America First’ policy,” King continued. “And if that reminds people of Trump, I can’t be sorry because it was a character that I wrote. It was a boogeyman of mine, and I never wanted to see him actually on the American political scene, but we do seem to have a Greg Stillson as president of the United States.”

The year after The Dead Zone, Sheen played another King villain — James Hollister — in the film version of Firestarter, starring a young Drew Barrymore as the titular pyrokinetic. “One of my idols and dearest friends, George C. Scott, was the other villain in that one,” the actor recalls. “It was always a great pleasure to work with George, and we were introduced to this little girl who was quite extraordinary. She had this lovely personality and was so disarming.”

Barrymore was only 9 years old when she played Firestarter‘s Charlie McGee, but she was already experiencing problems beyond her years, including troubled parents and alcohol abuse. “She really went through some rough patches in her life, even as a young girl when she was thrust into stardom,” Sheen recalls. “It’s never a good idea to impose that on a child and she was deeply affected by it. And thank God, she got through it.”

“She’s a very courageous young lady,” Sheen continues, adding that he’s seen Barrymore at public events in the years since Firestarter and also watches her daily talk show. “I saw her struggles, and I’ve also seen her heal and come back. More power to her — she’s a very special young lady.”