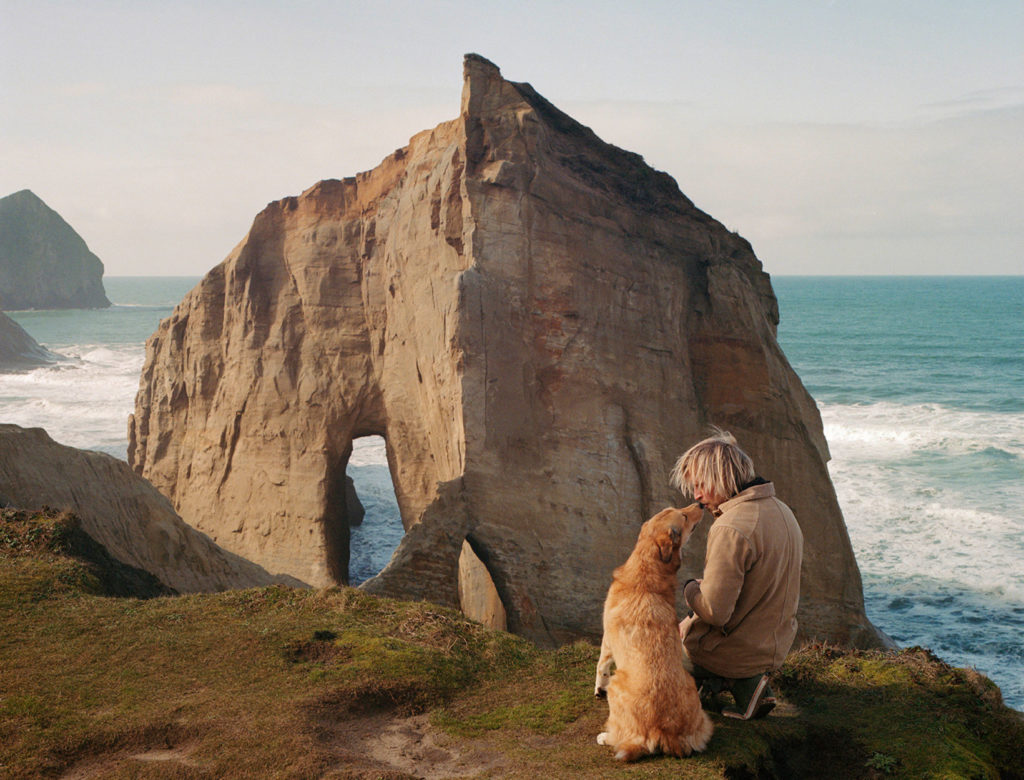 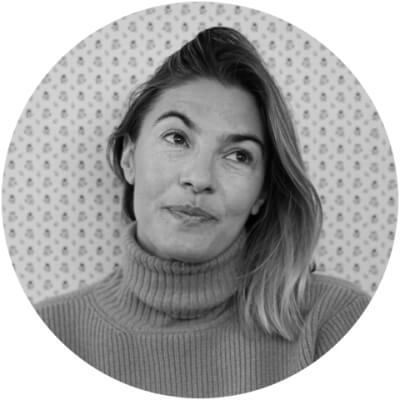 Andrea Arria-Devoe, a longtime editor at DailyCandy, is the executive producer of Straws, a documentary about how ditching plastic straws can make a massive difference to the environment. In her column for goop, Arria-Devoe shares her extensive knowledge about the best countertop composter, how to shop in bulk, and other hacks for living the chicest, greenest life possible.

Bringing your own coffee cup to combat climate change is akin to bailing out the Titanic with a teaspoon. So why bother? For Lauren Sweeney—cofounder of DeliverZero, a New York–based delivery platform that offers takeout in reusable containers—it brings joy.

“Our feelings can be powerful guideposts,” Sweeney says. In the early years of her daughter’s life, Sweeney’s career in the start-up world started to take off. As a single parent, she needed to rely on certain conveniences, like picking up a cold-pressed juice or ordering lunch at the office, to make it all work—but she felt bad about putting her empties in the trash or recycling bin: “It doesn’t feel good to endlessly consume. It contributes to the thing that could bring our survival as a species on this planet to an end.”

Sweeney knew that others felt the same struggle: “Many of us want to do better, but we know that individual actions don’t add up fast enough to match the scale of the crisis.” That’s when she joined her DeliverZero cofounder, Adam Farbiarz, to create a solution that would allow people to reduce waste and—perhaps more importantly—prove that a new way of doing things doesn’t have to be less convenient.

As a DeliverZero customer, I love reading Sweeney’s weekly newsletter, which rounds up relevant stories about our local and national waste and climate issues. It’s always written through a lens of hope with an emphasis on solutions. This fall, Sweeney had the opportunity to attend the TED Climate Countdown in Edinburgh and hear from many of the people behind viable climate solutions. She shares some of the initiatives she is most excited about and what climate optimism means to her.

A Q&A with Lauren Sweeney

Q
How do you personally define climate optimism?
A

The belief that we can rally the kind of large-scale investment in change we’ll need in order to mitigate the impacts of climate change and limit warming to 1.5 degrees Celsius. I believe that result is possible—and that if we pull it off, we’ll create a more equitable world in the process.

Q
How do you respond to people who think climate optimism is an illusion?
A

At the dawn of the Industrial Revolution, which wasn’t that long ago, the idea that human activity would warm the planet to such a degree would have seemed unthinkable. The idea that we might be able to halt warming at 1.5 degrees Celsius might now seem impossible. But rethinking the economic systems that brought us here will open a new world of possibilities.

We’re at the very beginning of a monumental shift in how investors, governments, corporations, and regular human beings measure success. We grew up in a culture in which GDP growth and profit were the be-all and end-all. Now more and more people are beginning to question that. The most powerful people in the capitalist system—I’m talking about CEOs of oil companies—will have to consider emissions impacts as important as their top-line growth. For some, it may be because they understand systems thinking and finally read The Limits to Growth. For others, it may just be the inevitable result of a global price on carbon emissions (something we should see very soon) or the fact that investors will want nothing to do with them if they don’t get with it.

To put it simply, the climate crisis was caused by the belief that making money is more important than anything else. With that idea reconsidered, nonlinear change becomes possible.

Q
I think “change” is the scariest part of climate change for most people. How do you respond to people who believe consumers or citizens can’t or won’t change their habits?
A

We’ve gotten so used to the joy of convenience. It’s an absolute delight to be able to walk into a store or a coffee shop and choose things that will make us marginally happier, if only for a moment or two. It’s wonderful to be able to open an app and book a flight to Australia or order dinner from the restaurant down the street.

“You won’t be out tilling the fields to grow your own food unless that’s something you’re into.”

And then the climate crisis rears its not-so-delightful head, and we worry that we might have to give up that convenience. I don’t think we will to the degree that one might expect. We will, however, need to participate in solutions, and in my limited experience so far, I find that people find joy in participating in solutions.

Q
What are the kinds of behavior changes we will need to make opportunities for joy?
A

By participating in systems of reuse, we encourage more human interaction. We might buy more food from local producers. We might spend time learning about the kinds of trees we can plant in our regions to support restoration. It’s already become cool to buy secondhand through apps like the RealReal or invest in things that will last a long time rather than consume mindlessly. And many of the most impactful solutions, like biofuel for jets and cleaner energy grids, won’t impact how we carry out our day-to-day lives at all.

You won’t be out tilling the fields to grow your own food unless that’s something you’re into. If everything happens as it could, consumers will be able to continue to enjoy many of the conveniences we’ve gotten used to, albeit in modified ways that may actually be more joyful.

Three Environmental Projects to Get Behind

Q
Are we trending in the right direction?
A

During COP26—the global climate change conference where nations adopted the Glasgow Climate Pact—450 organizations in the financial sector committed to moving $130 trillion into investments where the recipient is committed to net-zero emissions by 2050. Business leaders throwing money around might seem like business as usual, but to me, this is one of the best things to come out of COP so far. It will make impactful solutions financially feasible more often, and it will incentivize businesses to not only make net-zero commitments but make good on them, too.

Q
In your experience, why do venture capitalists shy away from circular economy business models and start-ups?
A

There’s a widespread belief that in a circular economy1
the returns on investments like these will be smaller and later, even though those presumptions are becoming increasingly less true. VCs who don’t make climate investments will often blame their limited partners (LPs); they will claim that their LPs don’t have the patience. But I think it’s important to call out that the very same VCs sold their LPs on a vision when they raised their fund, and that vision did not acknowledge that climate change is the greatest challenge—and greatest opportunity—of our time. That’s on them.

“Even as an optimist, and even in the best possible scenario, I know the climate crisis will still be ongoing when my daughter enters adulthood.”

There are great climate VCs who haven’t really gotten into the circular economy yet, and that’s a separate conversation. I’ve heard that they don’t have enough information on how circular solutions reduce emissions. That’s why I really appreciate organizations that help demonstrate that these solutions can significantly reduce emissions, like Upstream, the Plastic Pollution Coalition, and Beyond Plastics.

Q
Whom do you look up to in the sustainability space?
A

The investors I like to follow are Gabriel Kra (who gave a great talk at the TED Climate Countdown), Clay Dumas, Sophie Purdom, and Ron Gonen. Gonen is doing more for the circular economy than any other investor. Matt Prindiville (CEO of Upstream), Sandra Noonan, and Manuela Zoninsein are doing real work to make the circular economy a thing, so their perspectives are incredibly valuable. In Scotland, I got to meet Sandrine Dixson-Declève, co-president of the Club of Rome, and I love what she is doing to push forward the understanding that nonlinear change is possible. I can’t not mention Al Gore; my fandom was reinvigorated by his TED talk on how to make radical climate action the new normal.

Q
Are there any dream collaborations you would like to see between industry, citizens, and government?
A

I want to see Whole Foods step up and work with brands to imagine circular packaging solutions for harder-to-solve grocery packaging like protein bar wrappers, snacks, pasta sauce, and other packaged foods. It’s easier to solve for prepared foods (DeliverZero’s system as it’s designed now could do that), but there is so much plastic in a typical grocery order. It will take significant investment to change that.

I’d love to see my favorite beauty brands using a standardized system of reusable bottles that customers could return to be sanitized and reused, too.

Q
As a mom, how do you envision your daughter’s future?
A

Even as an optimist, and even in the best possible scenario, I know the climate crisis will still be ongoing when my daughter enters adulthood. By then, I think what we value culturally will have significantly changed in response to the climate crisis. She and her peers will be less likely to work to create money and more likely to work to create other types of value, whether social or scientific. I think we will have more artists, more scientists, and more local agriculture. We’ll also have more astronauts—but I like to think that she’ll still like hanging out with me on Earth.

Lauren Sweeney is the CMO and cofounder of DeliverZero, which provides zero-waste reusable containers for to-go restaurant food.

We hope you enjoy the book recommended here. Our goal is to suggest only things we love and think you might, as well. We also like transparency, so, full disclosure: We may collect a share of sales or other compensation if you purchase through the external links on this page.

1In contrast with a linear economy—where we extract resources from the earth, use them up, and throw them away when we’re done—a circular economy is designed to limit what we take from the planet, maximize reuse, and minimize (or even stop entirely) the production of waste.
Return to footnote 1