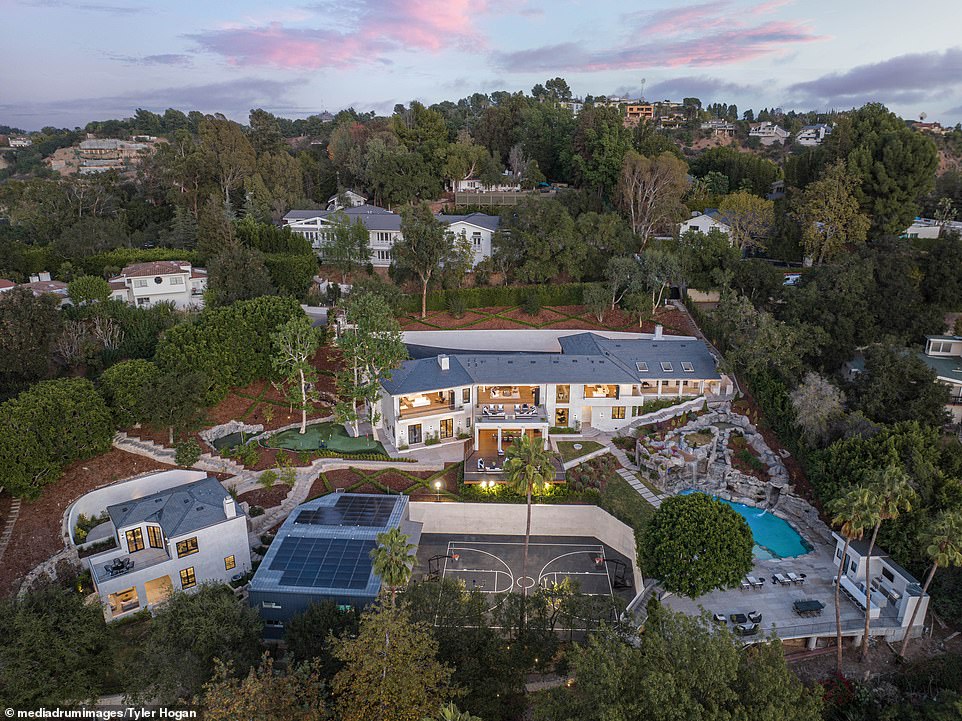 Mark Wahlberg’s former Beverly Hills home that was featured on the show Entourage has hit the market for a cool $28.5million.

The 13,962-square-foot property is located on Oak Pass Road in a gated community and is not short on luxury amenities, as it includes a $2million gym equipped with a boxing ring he trained in for The Fighter, and a pool featuring a waterfall.

The white house features black highlights and a gray roof and is surrounded by trees, leaving the property private to its neighbors.

It sits on 1.7 acres of land that also features a putting ground, a basketball court, a thousand feet of decks, an outdoor dining area with a wood-burning pizza stove, a three car garage, and a home theater.

The seven-bedroom, 12-bath, 13,962-square-foot property on Oak Pass Road sits on 1.7 acres of land and was owned by Mark Wahlberg 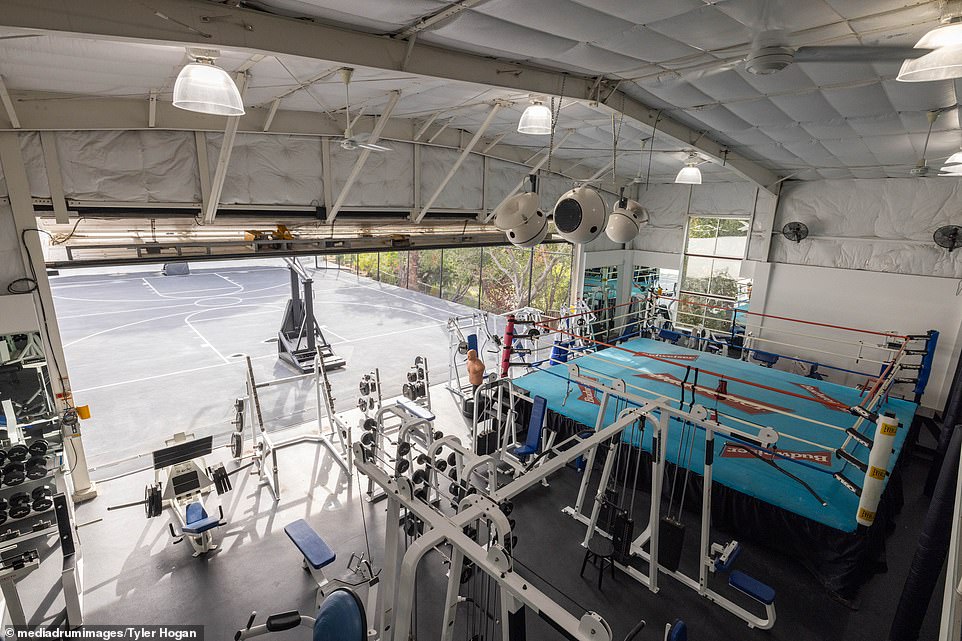 However, it still features the $2million home gym Wahlberg famously worked out in at 4am. It features a boxing ring he trained for The Fighter in and several weight racks 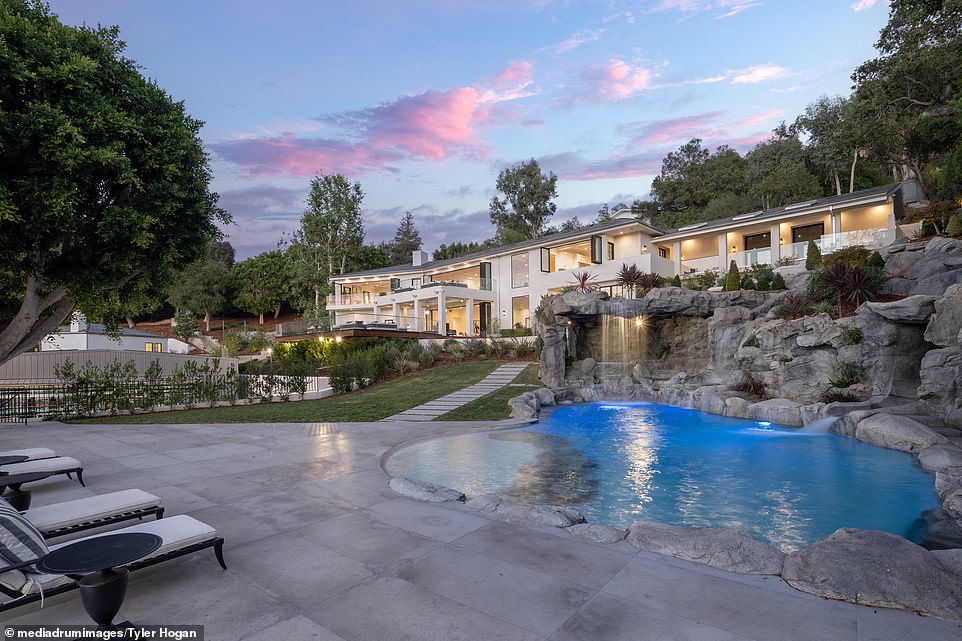 The backyard features a stunning pool, complete with a waterfall and alcove pool area behind it 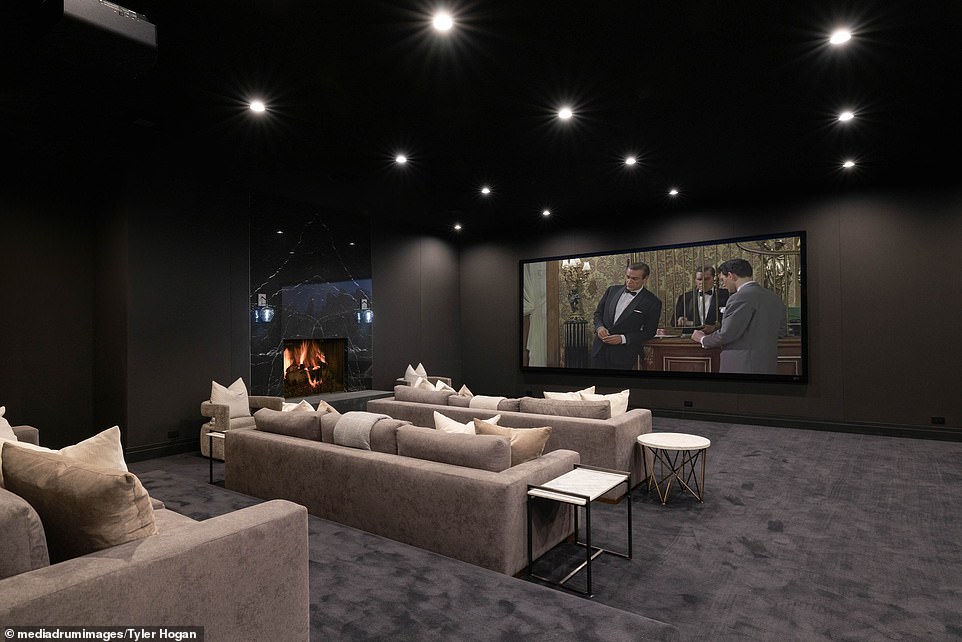 The home also has a home theater, but forgoes the traditional theater seats, choosing comfortable couches and has a fire place to give the space an intimate feel 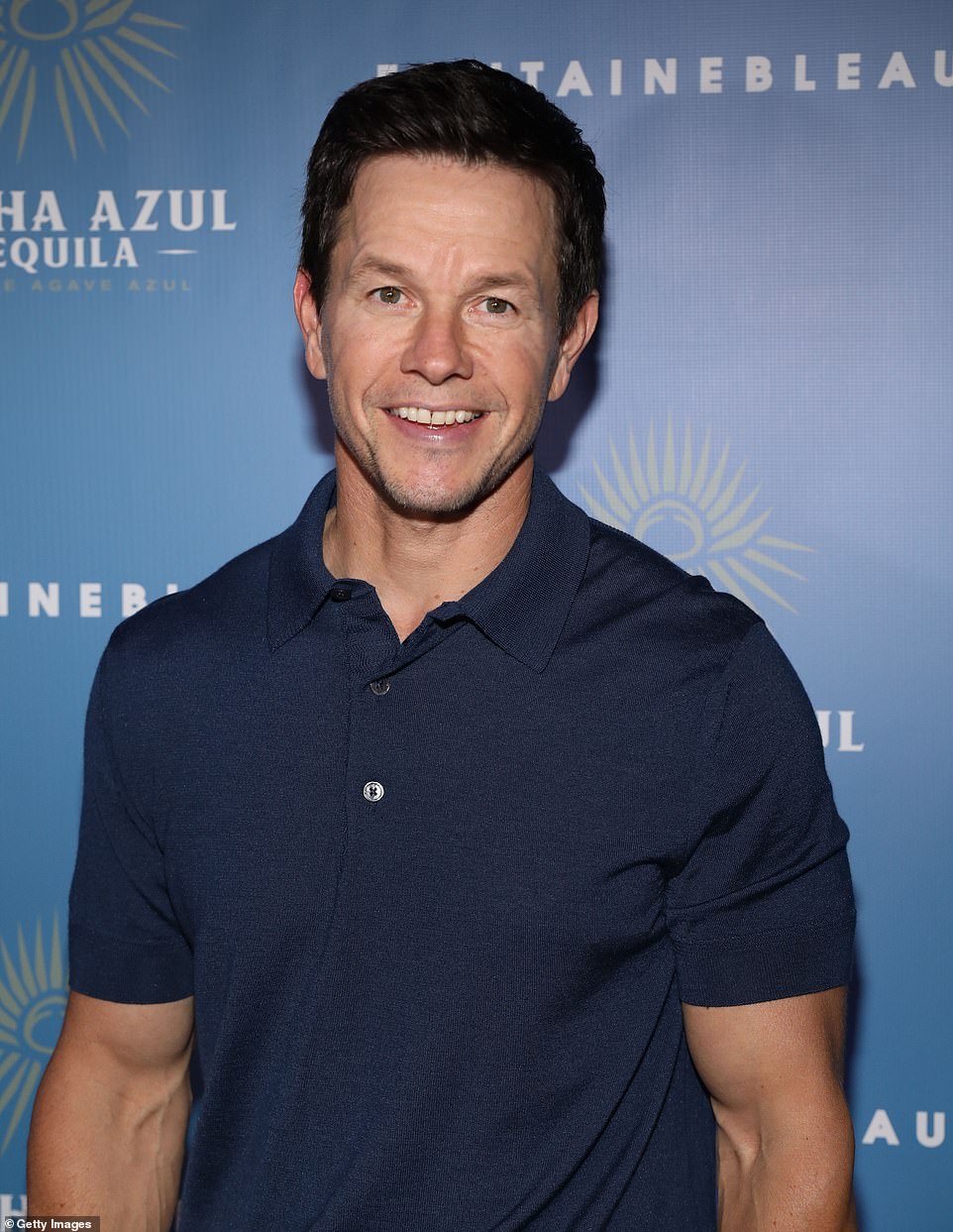 Wahlberg owned the property from 2001 to 2013. It has since undergone several changes since the actor owned it

The main property includes five bedrooms and eight bathrooms and the house is full of natural light with floor to ceiling windows in the main living areas.

The living room features an open concept room with high ceilings and a large stretch window with foldable doors to connect the back patio to the main home with beautiful views of palm trees and a hillside.

The room is connected to the dining room that features a boxy chandelier. The dining room also features a large window directly behind the table to leave diners with a stunning view and airy feel. 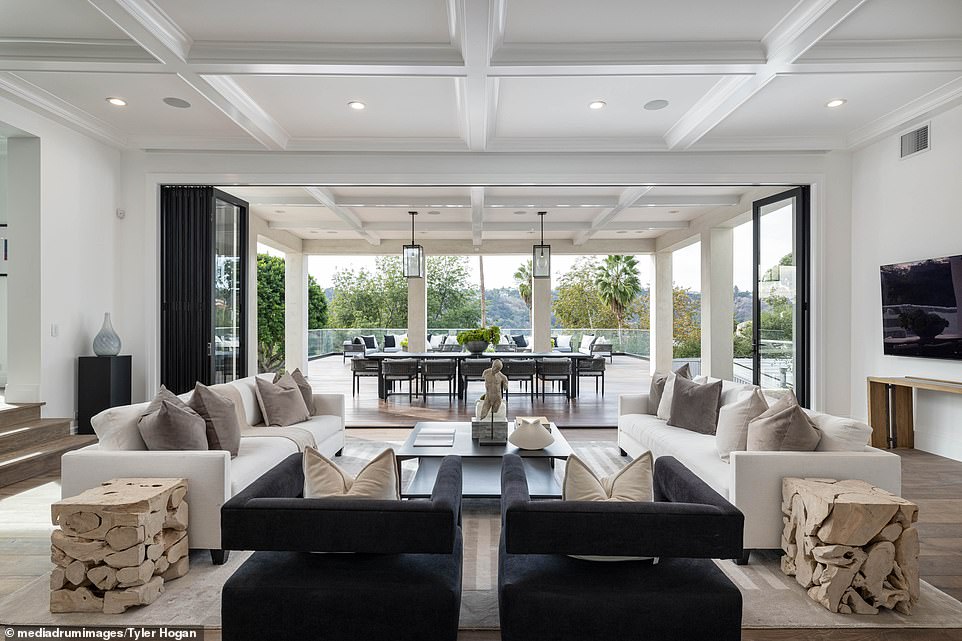 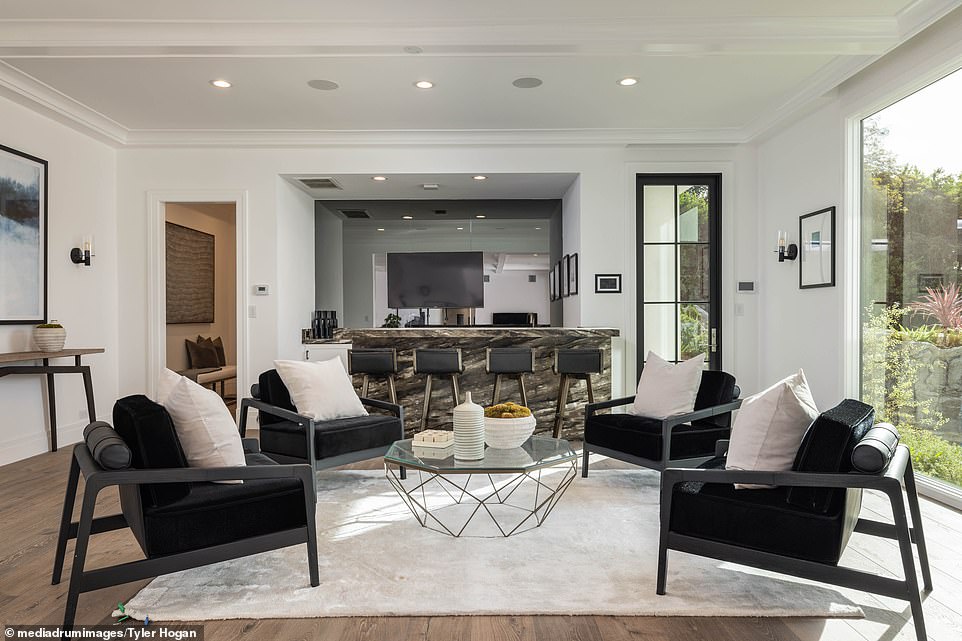 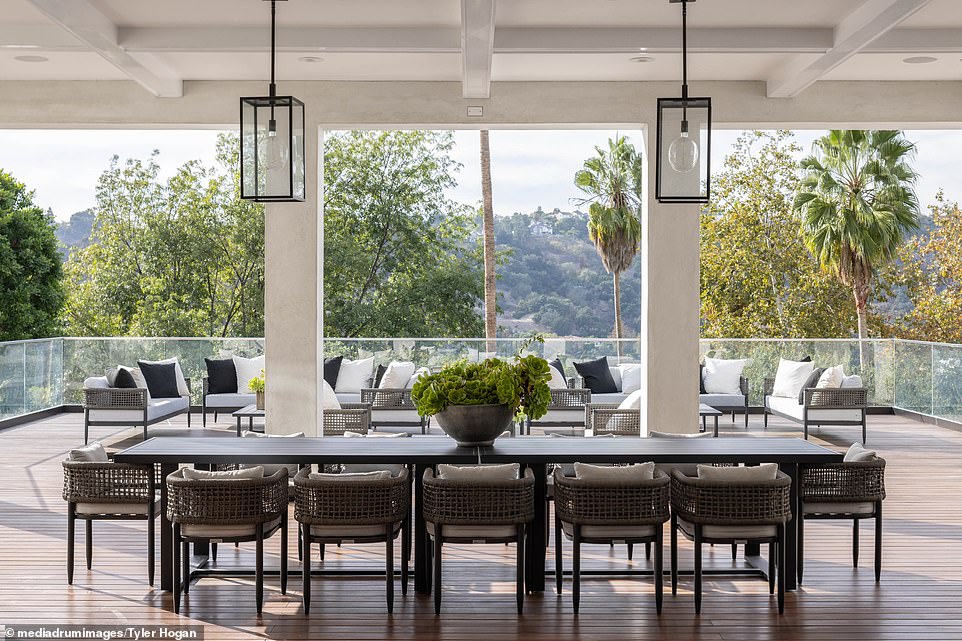 Next to the dining room is the kitchen set off in a different room. The large chef’s space features marble counter tops, two ovens, two sets of burners, and plenty of cabinet space and stainless steel appliances.

The countertop also extends into a bar top area and has two sinks on both ends.

Like much of the house, it also features a large window and light colored cabinets and light wooden floors. It features a small dining area perfect for family dinners and a wine rack set into the wall.

The master bedroom features a similar setup to the living room, featuring nearly floor to ceiling windows that fold out to a small deck area. It also features a fireplace and room for seating.

It also has a vanity station and a basin sink tilted with a chair for professional hair washing, as seen in salons, and several other cabinets situated around the home and offset walk-in closets with ample space to house bags, shoes, and clothing. It also features a small ottoman and a chandelier to give the home owner a luxury feel. 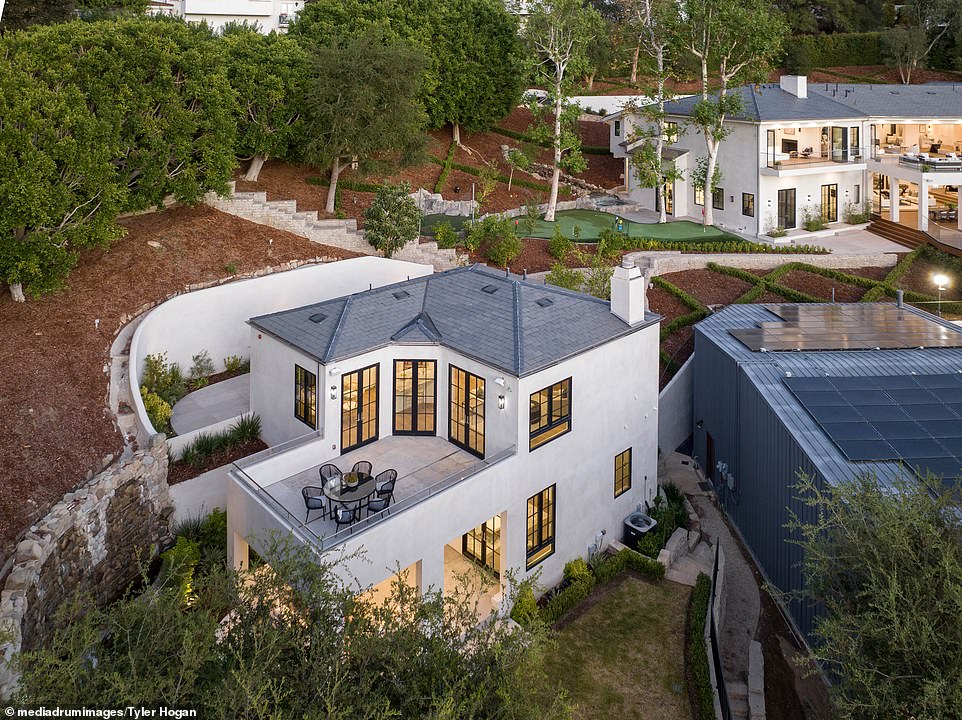 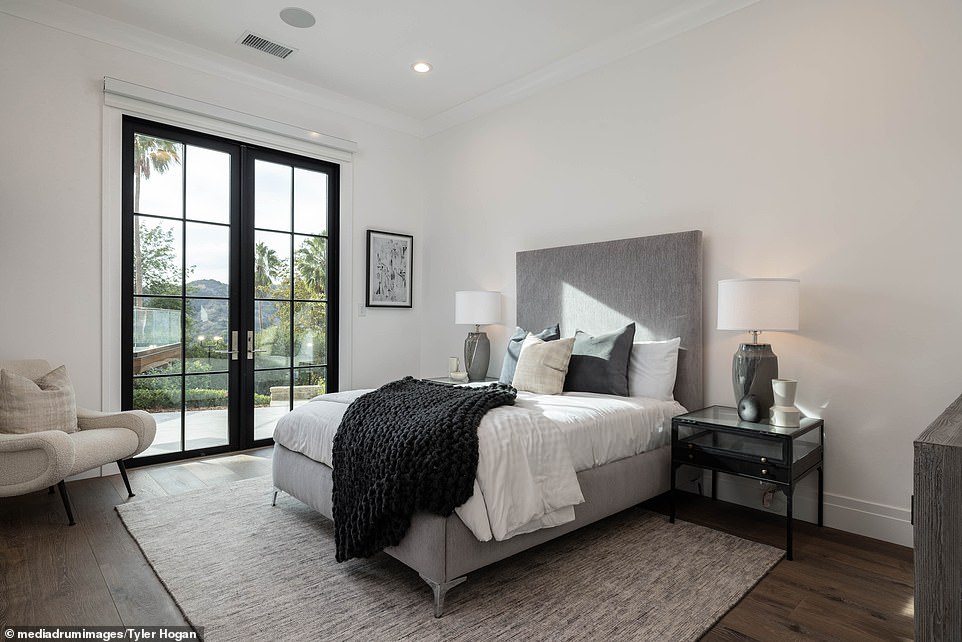 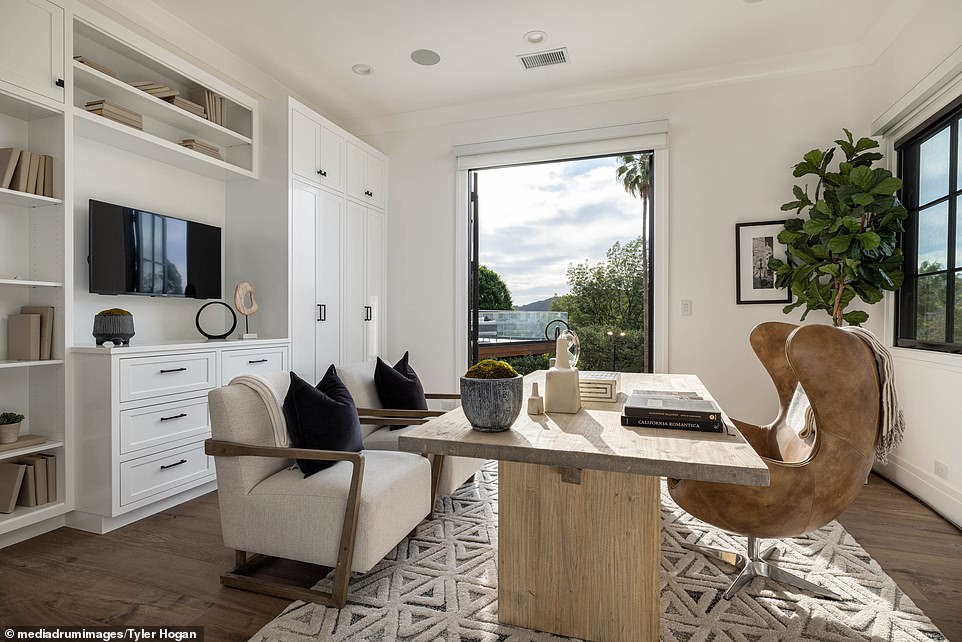 It also has a door that leads to the outside.

A different bathroom has a contrasting vibe, complete with dark flooring and brownish marble walls and counter tops. It also has a TV.

The home theater features a 136-inch screen and forgoes traditional theater seating, instead opting for intimate couches and a fireplace.

The downstairs living room has a darker feel, option for black chairs to go with the cream colored couches. It has a small bar years that has a TV and a separate seating area. 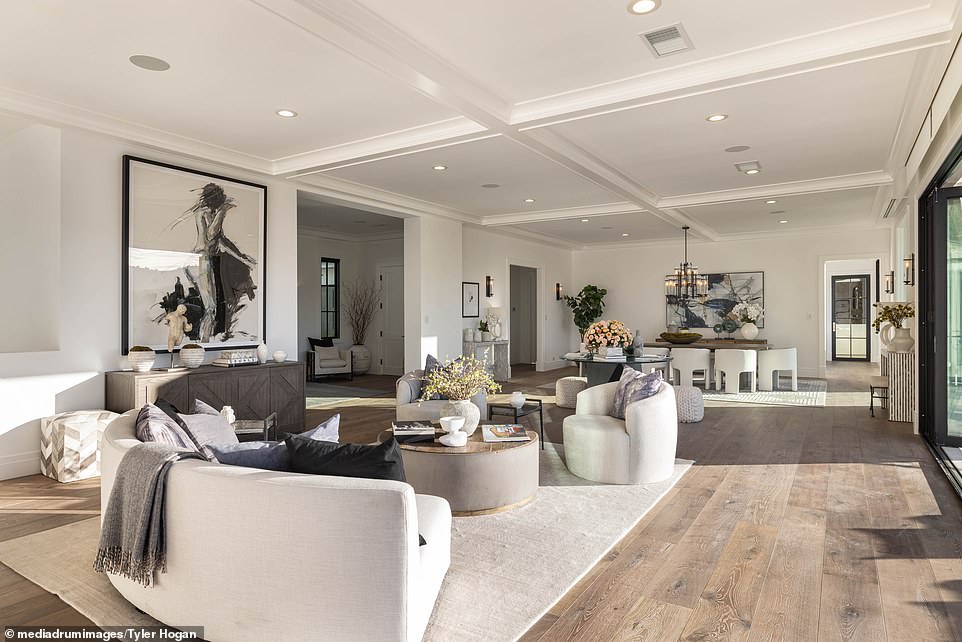 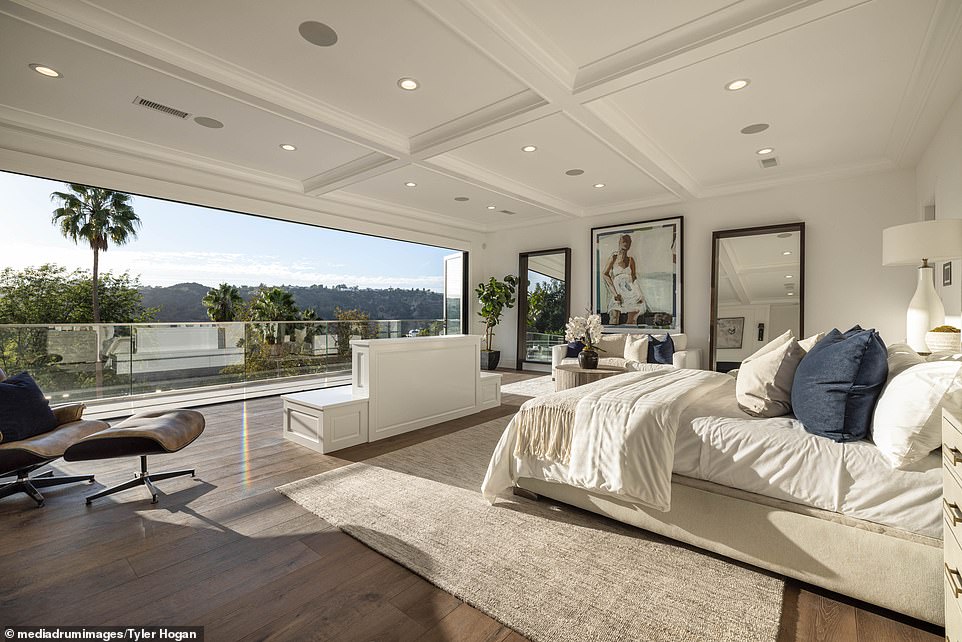 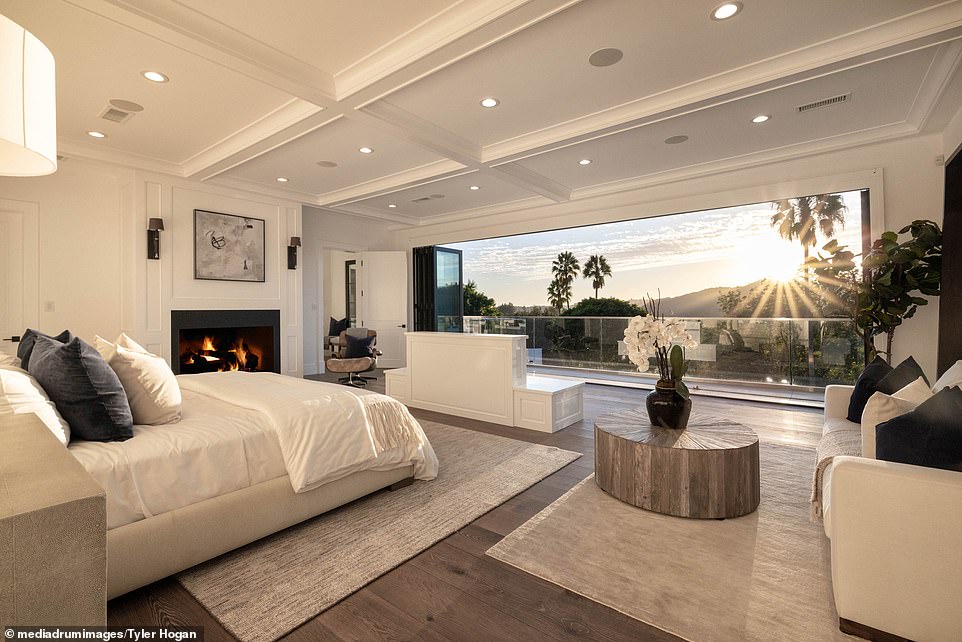 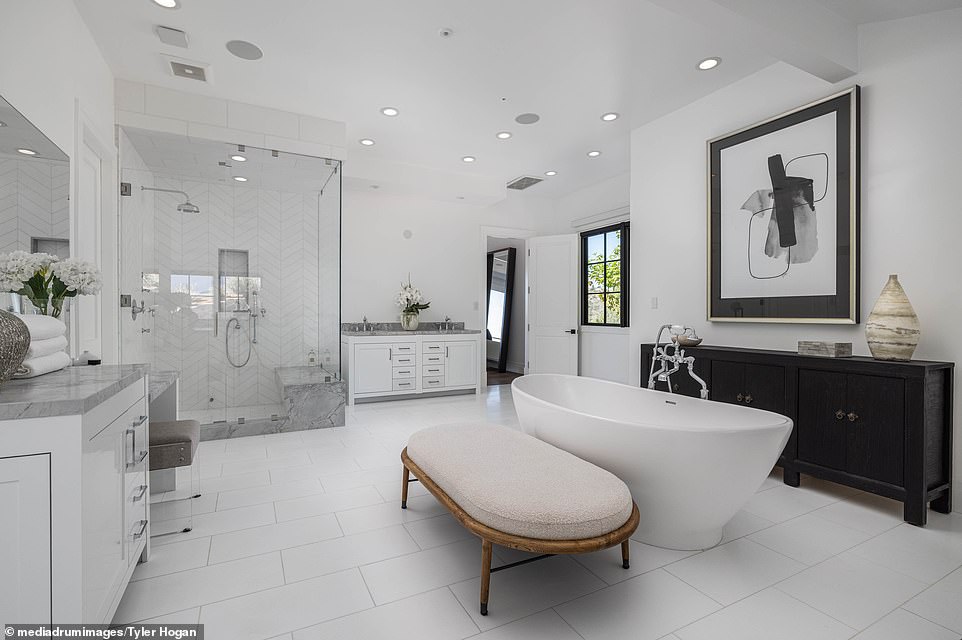 The master bathroom is all-white with white tiling and a glass shower. It also has a standalone tub and features several counters with gray marble tops 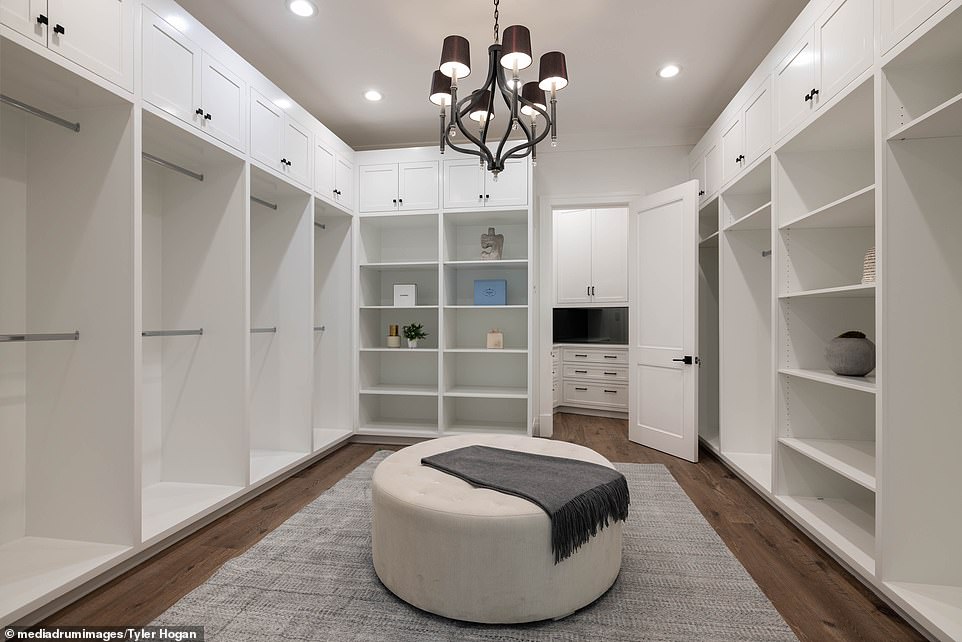 Extended from the second living room is an large outdoor dining space that is housed under a roof. Extended even further is an uncovered, raised deck area.

Below the deck is a home gym with a basketball court and a boxing ring.

Across from it is a pool with a waterfall sits with loungers facing the house and an alcove pool behind the waterfall.

Also featured on the property is a putting green located off the side of the main house.

The property also features a standalone guest house that has two bedrooms and three bathrooms. It also has its own back decks facing away from the main house for privacy. 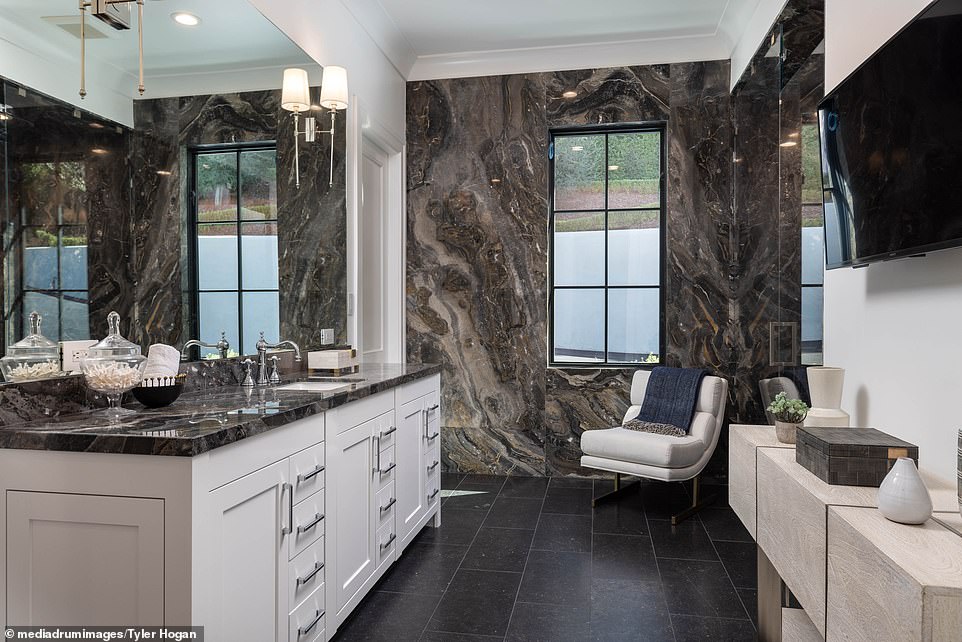 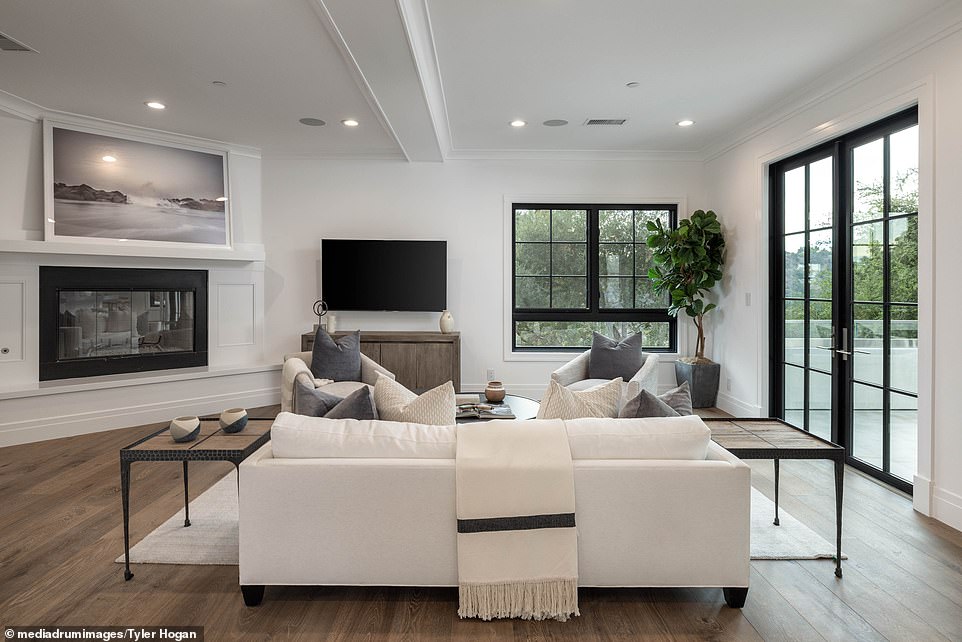 Wahlberg, who owns another home in Beverly Hills worth $87.5million, has recently taken the property off the market due to soaring mortgage rate.

Wahlberg has already purchased new land in Nevada, where he says he plans to relocate in search of lower taxes and better quality of life, but it seems he has the resources and patience to wait out the cooling housing market for better terms.

Wahlberg revealed earlier this month that he is leaving his longtime home in Los Angeles in favor of Nevada in a quest to eventually build ‘Hollywood 2.0’ in Las Vegas.

In April, Wahlberg made the move to sell his Beverly Hills mansion 13 years after purchasing the plot of land and building his dream family home. 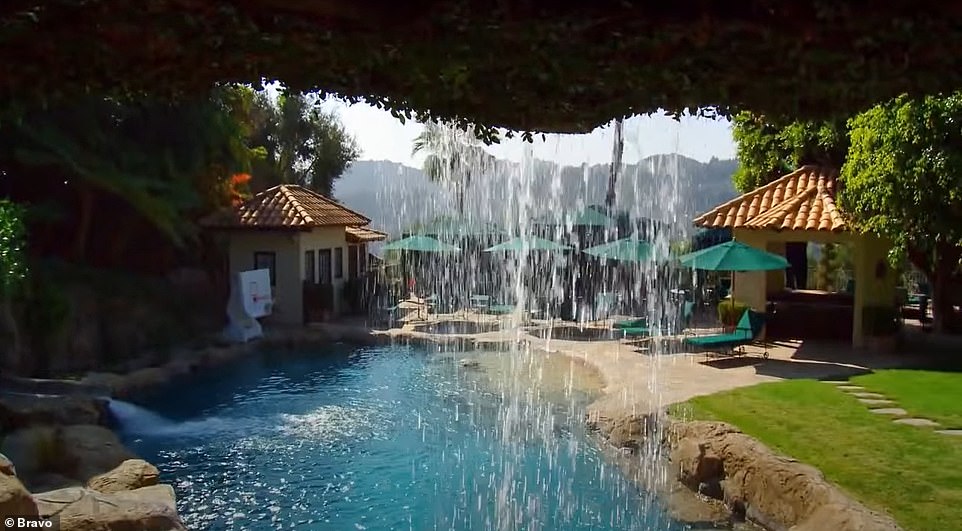 Around the time that Wahlberg owned the home, the pool area feature a more waterpark feel and feature brighter colors and green furniture 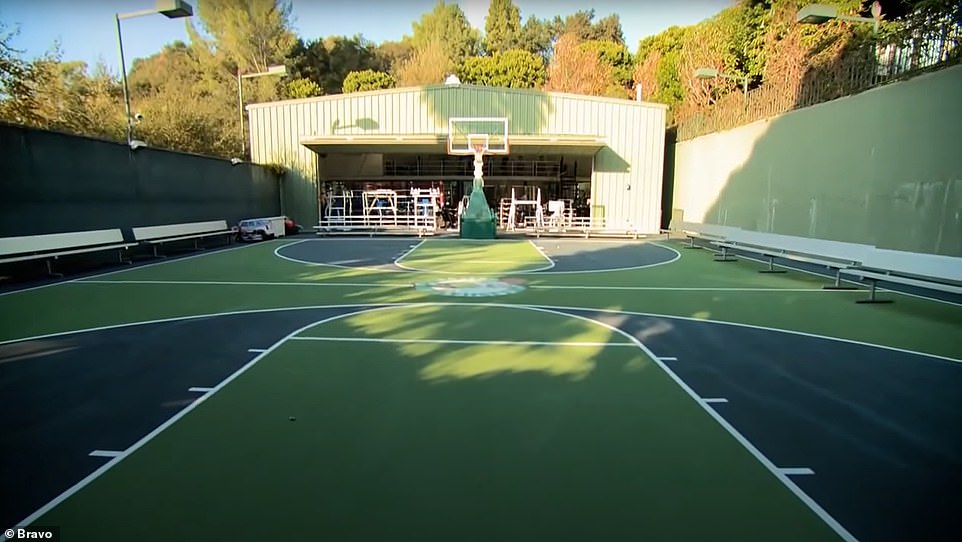 The actor initially splashed out $8.25million for a dirt lot in 2009 in the exclusive North Beverly Park community located in the canyon overlooking Hollywood, and enlisted the help of architect Richard Landry of The Landry Design Group to create the home of his dreams.

The family compound features an astonishing 12-bedrooms and 20-bathrooms across 30,500 square feet of living space.

He’s already made two purchases in the Silver State, a $15.6million 2.5-acre block of land in an exclusive area that he plans to build out, as well as a $14.5million bungalow to live in as construction begins, according to Elite Agent.

In an interview on Tuesday for The Talk, the 51-year-old actor said he had bid the Golden State farewell in hopes of giving his children a ‘better life’ in income tax-free Nevada. 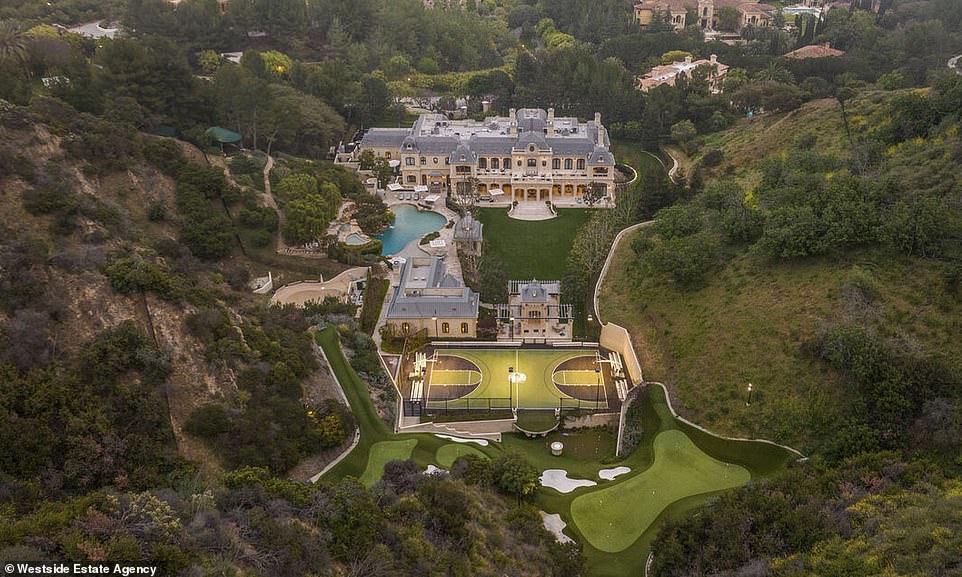 Wahlberg has taken his other lavish Beverly Hills mansion (pictured) off the market, realizing he will have to wait for the housing market to rebound in order to command top dollar

The massive piece of property is nestled in the canyon just below Mulholland Highway, and overlooks the city of Los Angeles, and was on the market for $87.5million 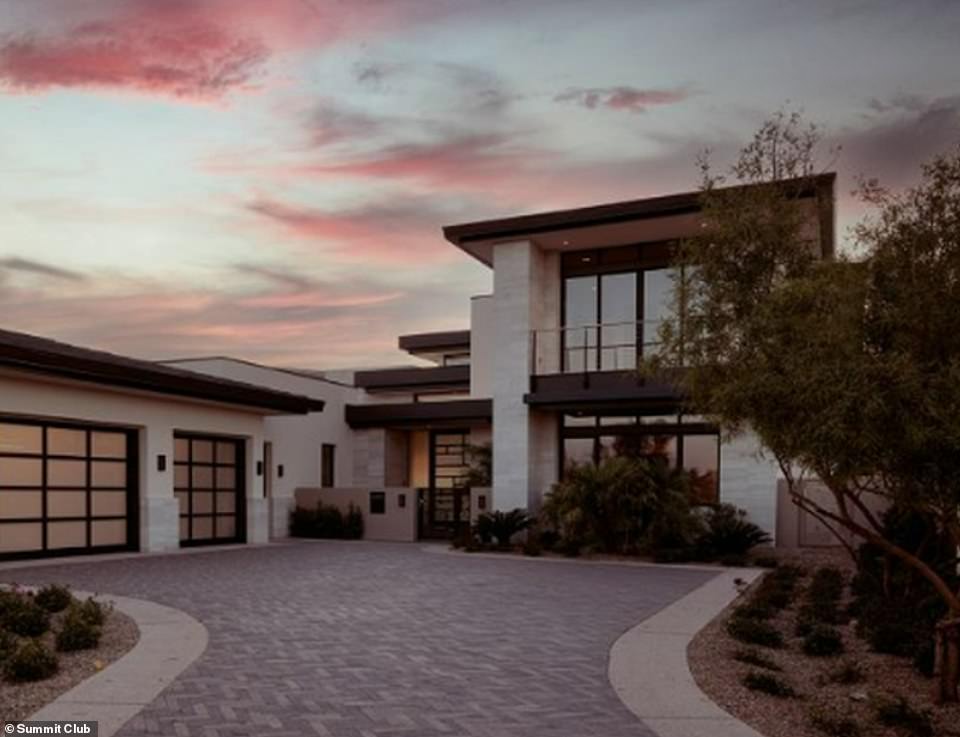 Wahlberg has already made two purchases in Nevada, a $15.6million 2.5-acre block of land in an exclusive area that he plans to build out, as well as a $14.5million bungalow (pictured) to live in as construction begins